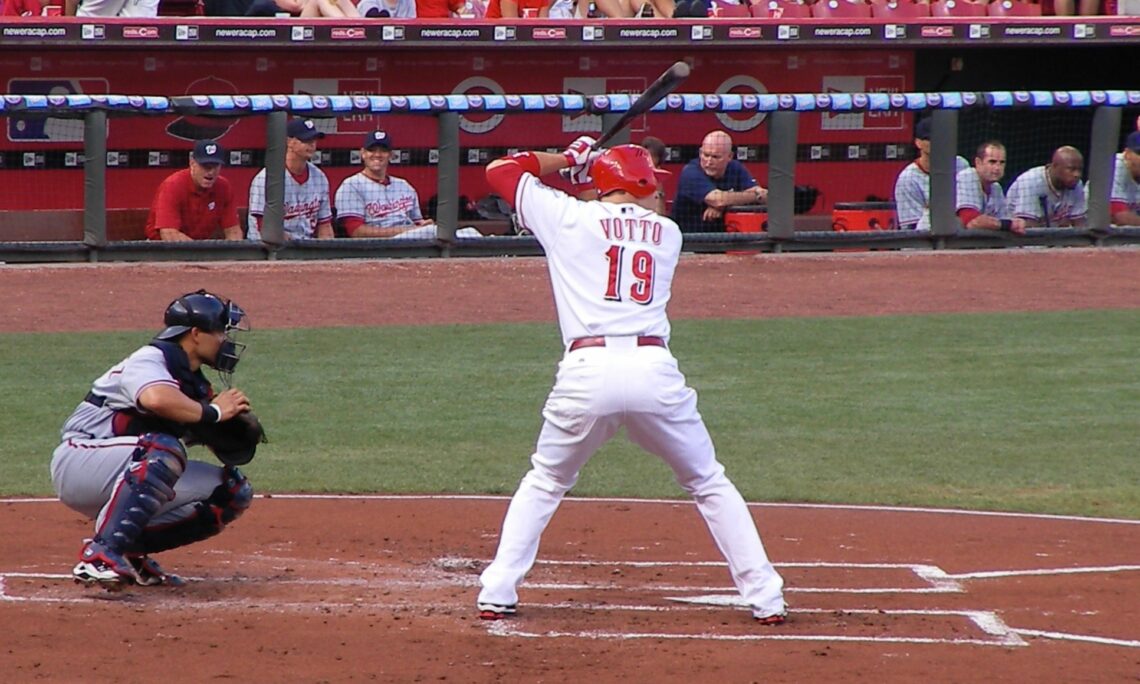 Last night, Joey Votto came through in the clutch like he has many other times in his career. Down 4-3 against the Brewers, he lined a game-tying double down the right-field line, scoring the speedy Nick Senzel from first base. It was Votto’s second hit of the night, each coming in at an exit velocity over 100 mph.

However, it wasn’t long ago that Votto wasn’t collecting many hits at all, let alone hitting the ball hard. On May 22, Votto hit a low point. His season slash line (.208/.318/.333) was almost unfathomable for a player of his skill set, even at age 35. He was hitting 28% worse (72 wRC+) than the league average batter.

The always-loud critics of Votto got even louder. His steadfast believers, myself included, started to get a bit concerned. Was Votto beginning his decline in his mid-30s? While few people expected his slash line to stay so low all season, there were some serious red flags.

Votto had an average exit velocity of just 86.9 mph and a hard-hit rate of 30.0%. Paired with an increase in strikeouts and ground balls and a decrease in walks and line drives, he had a .310 xwOBA. From 2015 (the start of Statcast) to 2018, here’s how he measured in those metrics:

It’s one thing to strike out a little more; it’s another to lose some thump when contact is made.

But in true Joey Votto fashion, he has made adjustments and turned his season around. Take a look at how his wRC+ — which is now above average for the season (105) — has steadily climbed:

Not only is Votto getting more hits to fall, but he’s putting better contact on the ball. His average exit velocity has steadily risen since the end of May:

As has his hard-hit rate:

Naturally, his wxOBA is up to .330 as well, putting him fifth on the team just behind Eugenio Suarez (.333). Due to the slow start, his average exit velocity still ranks in just the 29th percentile in baseball. But it’s heading in the right direction.

Votto is doing a few things differently. He’s been selective at the plate this year, but not as much as usual, particularly in May. He’s back to being one of the most selective hitters in the game, swinging at only 37.1% of pitches since the start of June. Only seven hitters have swung less during that time, including Mookie Betts, Mike Trout, and Alex Bregman, three elite hitters with excellent plate discipline. He’s chasing only 15.5% of pitches outside the strike zone during that time, the second-lowest rate among all qualified hitters behind Cavan Biggio.

One of Votto’s biggest problems early in the season was with off-speed pitches. He had a horrendous .193 xwOBA against changeups and splitters through May 22. He was swinging at them 42.2% of the time and whiffing on 39.1% of those swings. Now, he’s dropped his swing rate to 38.5% and the whiff rate to 16.7%. The xwOBA on off-speed pitches since May 24 is still rough (.276), but it’s significantly improved and far closer to league average (.285).
His improvements with hard contact have also been beneficial because he’s hitting more line drives and fewer ground balls.

Votto isn’t the player he was even as recently as 2017. But until we see decreased performance over a longer period, maybe we should pump the brakes on declaring one of the best hitters of his generation to be done. He’ll just prove everyone wrong again.