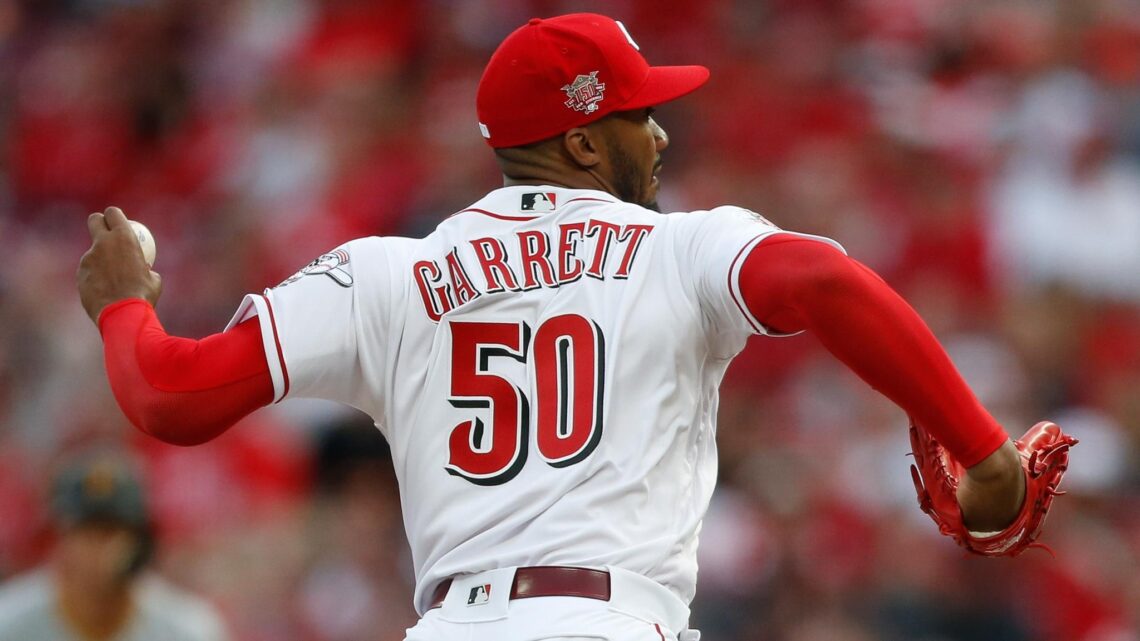 Amir Garrett still has a nice and shiny 1.85 ERA. He’s struck out a whopping 35.6% of the hitters he’s faced. But a cloud has hung over him all year. It was harmless at first — nothing more than a cumulus cloud. It’s starting to develop into a cumulonimbus. A thunderhead.

Control, or lack thereof, is starting to rain on an otherwise dominant season.

In Wednesday’s game against the Brewers, Garrett entered in a precarious situation during the fifth inning with a 4-3 lead, runners on first and second, and two outs. He was brought in to face the mighty Christian Yelich in a lefty-lefty matchup. It was the high-leverage situation Garrett should be used in.

The erratic control came back to haunt him.

He walked Yelich, with a wild pitch throw in in for good measure, to load the bases. Garrett threw five sliders — four were balls — and one two-seam fastball to Yelich. Against Yasmani Grandal, Garrett again got behind 3-1. He ran the count full and left a two-seamer too far over the plate. Grandal hit the ball on the ground, but it came off the bat at 107.5 mph and found its way into left field. Two runs scored, which ultimately decided the game. Garrett threw nothing but sliders to Eric Thames in the top of the sixth inning and got a strikeout, but he again got into a 3-2 count.

The shaky outing leaves Garrett with a 13.5% walk rate and continues a troubling trend of handing out free passes. 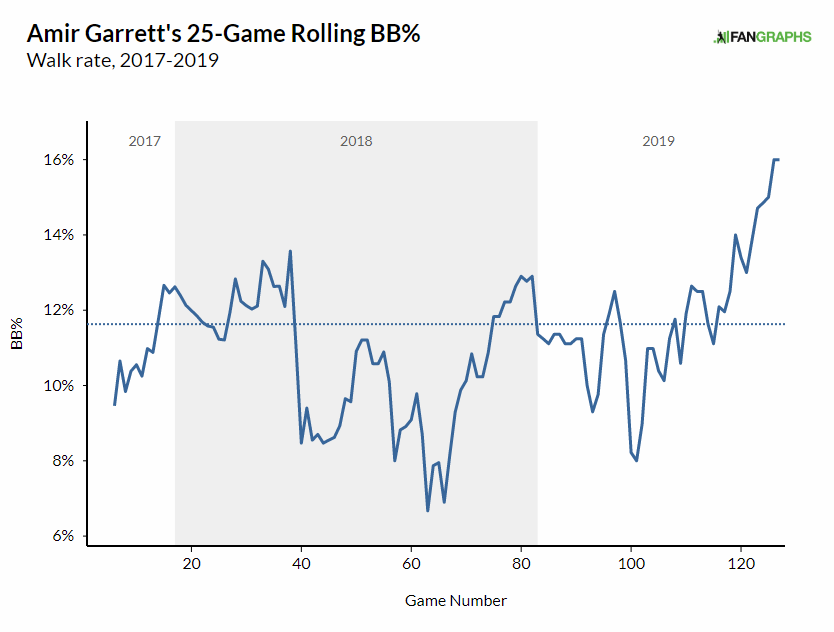 Garrett has never excelled at limiting walks — his career rate sits at 11.6% — but the problem has worsened this year. Over his last 10 outings and 8.1 innings, Garrett has walked nine batters and hit another. It hasn’t dented his ERA much. FIP (3.09), xFIP (3.15), and SIERA (3.46) show he hasn’t been as dominant as that ERA indicates, however, due largely to the walks.

A lot of Garrett’s success this year has come because he started throwing the slider heavily. Nearly 60% of his pitches have been sliders, a huge increase from 34% in 2018. That’s helped him strike out more batters and induce more weak ground balls. Is the league catching on to him, though?

The slider is often not meant to end up in the strike zone. The league average zone rate for sliders is 42.8%. Garrett comes in just under that at 39.8%. While front- and back-door sliders are effective, the pitch is often designed to look like a fastball to the hitter before darting away from or toward them. The result is often a swing and miss as the batter chases. Garrett’s chase rate is 39.5% on sliders out of the strike zone (league average: 34.0%). But without good command — or when hitters catch on to how often and when it’s being thrown — it can lead to getting behind in counts and walks.

Is Garrett struggling to control the slider, or have hitters simply stopped swinging at it? The movement on the pitch has remained consistent all season. Over his last 10 games, Garrett has a 37.2% zone rate on 113 sliders. Not much different than his season rate. But on those pitches outside the strike zone, batters have learned to lay off. 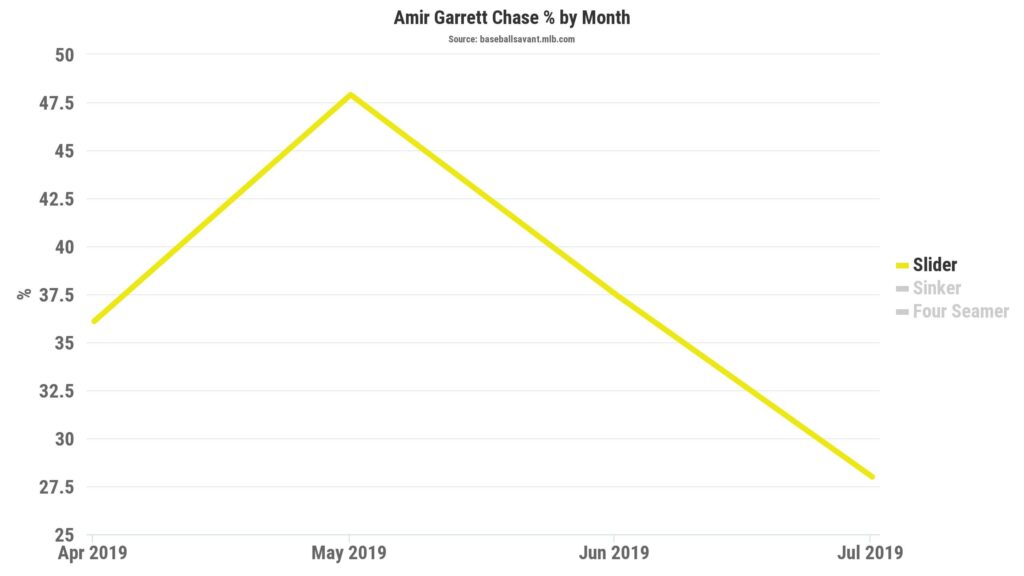 The slider’s chase rate has been on a steady decline since the middle of June, which is when the issues with walks started spiraling a bit out of control. Left-handed batters, in particular, have stopped swinging at the pitch as often at only 38.3% over the last 10 games versus 49.1% before that.

Is he throwing the pitches in “chase” zones at the same rate? Or is he completely missing his spots with the slider? Is he just too predictable?

Only 8.8% of his sliders in his last 10 games have been in Statcast’s “waste” zone, which would indicate he isn’t wildly missing the target. His rate of sliders in the “chase” zone has stayed consistent too. It seems more likely, then, that hitters are simply laying off his breaking pitch more often.

Here’s a breakdown of when Garrett throws each pitch in his arsenal: 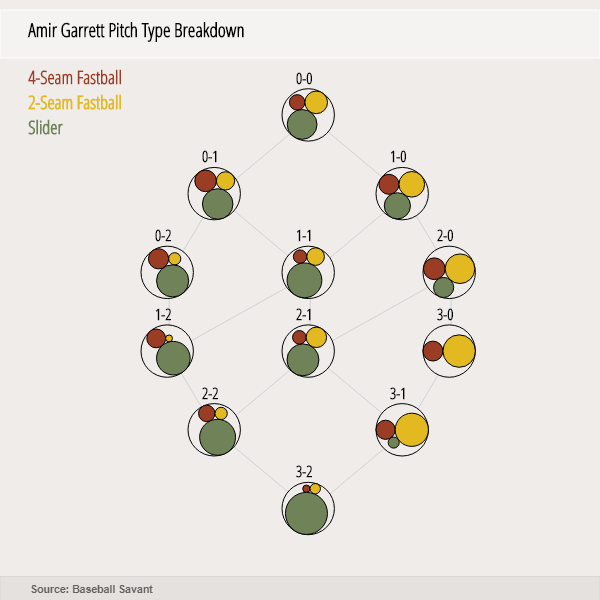 The slider is Garrett’s go-to pitch in every count except 2-0, 3-0, and 3-1. By throwing a slider so heavily on the first pitch, Garrett opens himself up to getting behind in the count right off the bat.

As hitters have stopped swinging at his slider so much, his first-pitch strike rate has decreased accordingly. 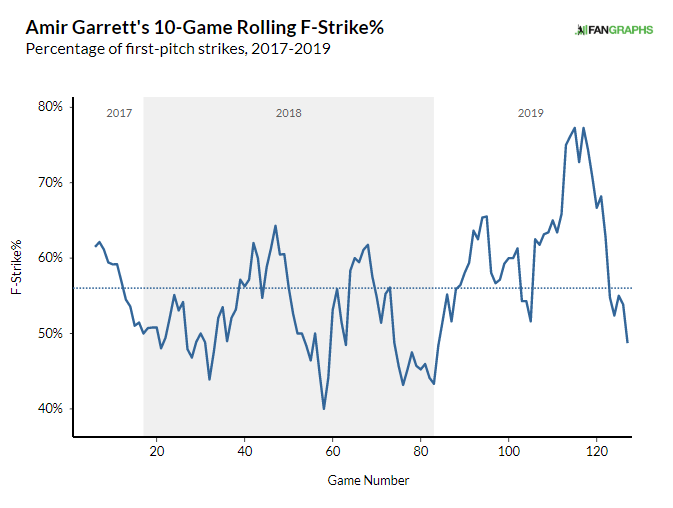 Garrett probably doesn’t need to dramatically decrease his slider usage — it is his best pitch and one of the best sliders in the game. But teams have seemingly caught on to how much he’s throwing it. Mixing in a few more fastballs could help him regain some deception and cut down on walks. Fortunately, it looks like he has already started to do that. 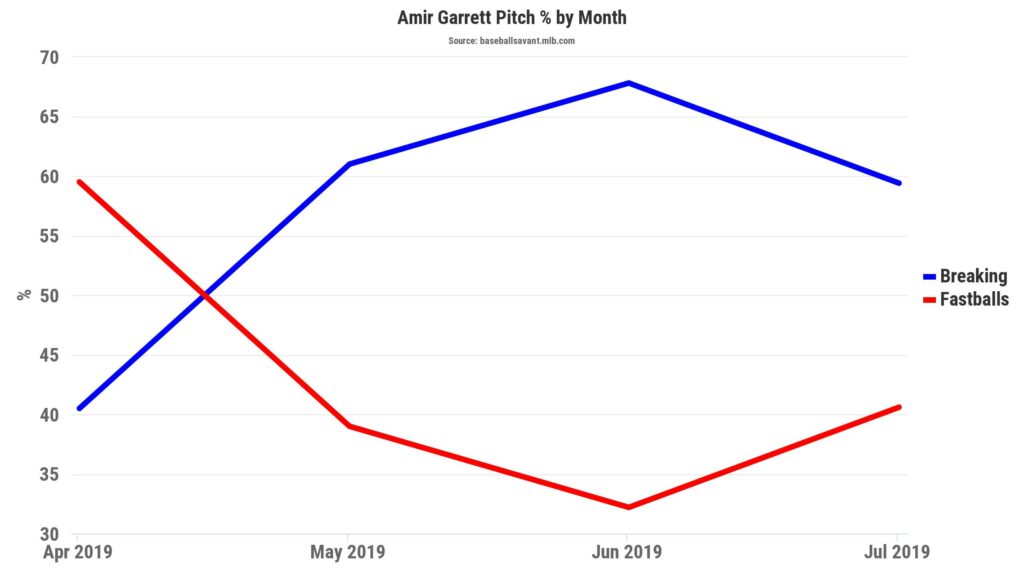 All stats through Saturday, July 27.

Matt, another excellent analysis. As an “old-school” guy, you really do a great job utilizing data to help an old timer understand why the numbers are important, and give content/understanding to what my eyes are seeing.
Additionally, it is not hard to make the leap to understand why David Bell makes decisions he does, because I believe the Reds now have smart guys like you to interpret the data and pass that along to the coaches. It really is fascinating to see the numbers revelation that has occurred in baseball. Thanks for what you and the team at RC+ are providing.
Best regards,
Armo21

Great article Matt. I suspect the league and hitters are adjusting to the data. Garrett is a good young pitcher and he gets to adjust as well. Overall, a great year.

Thank you for reading! It does seem like the league has adjusted to Garrett. Yesterday was an encouraging sign that he’s adjusting back. He threw an almost even mix of fastballs and sliders against the Rockies.

Thank you! I know not everyone knows about the new data — heck, even I learn something new every day — and try to be mindful of that in my posts. Analytics don’t have as much use if you can’t break down why they’re useful!