The Reds (46-54) return to Cincinnati for a 6-game home stand starting tonight with the Colorado Rockies (48-55). It’s the first of three games against the NL West’s last-place team. The Reds were just out in Denver where they lost the series 2-1 despite outscoring Colorado 28-22. Game time tonight is 6:40 pm ET.

Feel free to use this thread to discuss the game before and while it’s going on.

The pitching in this opening game of the series should be terrific. German Marquez is an excellent young pitcher and a good matchup for Luis Castillo. Here are the fundamentals:

Marquez has a fastball to match Castillo. Castillo strikes out more, but Marquez has half the walk-rate. They are both good ground ball pitchers. That last column reminds you that Marquez pitches in Coors Field. Here are the composite stats:

This is one of many examples where looking at ERA can be misleading. If you’re relying on that stat to evaluate pitchers, you’re doing it wrong. There’s a readily available set of statistics that does what ERA once did, but much better.

Adjusting for BABIP and home runs per fly ball indicates the contest between Marquez and Castillo should be a good and close one. Although you can tell from the xwOBA that Castillo has been better overall with contact, strikeouts and walks.

Luis Castillo has cut his walk rate back some. This is a welcome development. In two of  his last three starts he gave up just one walk and hasn’t walked more than three batters in four starts.

The Reds are without Nick Senzel, who abruptly left Wednesday’s game after singling. He seemed unsteady and possibly dizzy as he walked off the field. Jesse Winker leads off a lineup that manager David Bell has loaded with left-handed bats. Winker is in CF. Josh VanMeter is playing left field and batting third.

UPDATE 2: Tucker Barnhart has been activated off the Injured List and will start tonight, batting 8th. Luis Castillo will bat 9th. Juan Graterol (C) was placed on the concussion protocol list.

The top three hitters in the Rockies lineup are as good as you’ll find in the National League, at least when they’re playing in Colorado. 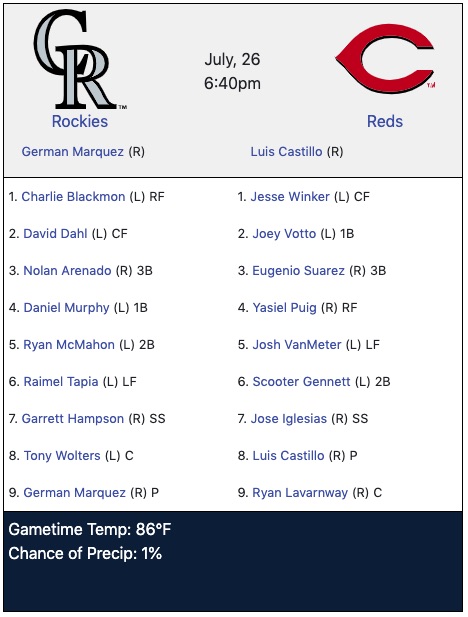 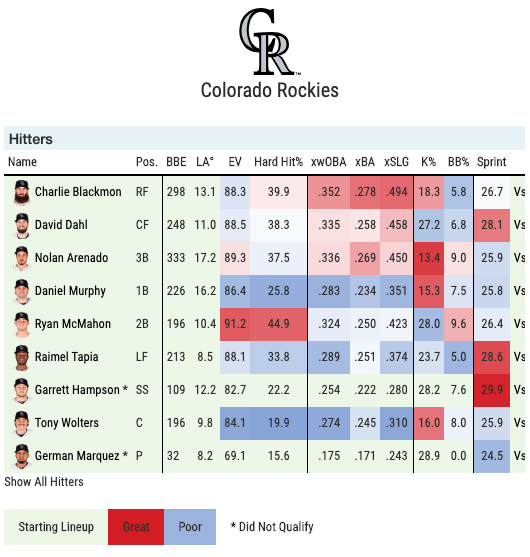 Marquez leads NL pitchers in innings pitched. Castillo is second in WAR behind Scherzer and ahead of Ryu and DeGrom. Should be a good one. Go Reds.

That’s right. Marquez’s ERA hides a lot that’s there to like.

Really glad to see VanMeter getting another start with Senzel out. Easy to forget he’s only 24 (three years younger than Ervin). Interested to see what he can do with a little more playing time.

It’s a wonder that Jose Iglesias has so many 2-strike hits. He swings at everything so why pitch the ball anywhere close?