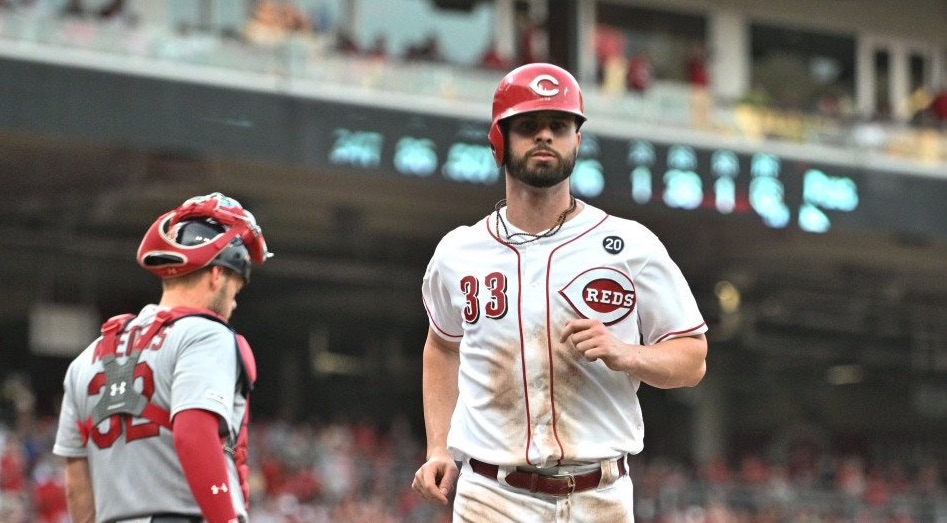 In yesterday’s game, Jesse Winker started in left field and batted three times. He went 3-for-3 with a double and two singles. All three of Winker’s batted balls exited with over 100 mph velocity.

In the 7th inning, the Brewers brought in left-handed reliever Alex Claudio to face Winker with a runner at first base and the score 1-0. David Bell countered by bringing in Phillip Ervin to pinch-hit for Winker.

The events of yesterday followed a consistent pattern for Bell. He platoons the left field position based on the handedness of the starting pitcher and he pinch-hits for Winker later in the game to avoid him facing left-handed pitching. If anything, Bell is getting stricter about this. Winker got 22 plate appearances vs. LHP in May but only 5 in June. He has yet to face a lefty in July.

The practice is controversial among folks who favor leaving Winker in for those situations. After all, Winker is one of the Reds best hitters and was a top hitting prospect in the minor leagues.

What lies behind David Bell’s thinking and does it make sense?

The Reds drafted Jesse Winker in the 1st round (49th pick overall) of the 2012 draft out of Olympia High School in Florida. Winker then followed a standard minor league development timeline, debuting with the Reds in 2017. He had become a Top-100 MLB prospect by 2015.

In AA and AAA, Jesse Winker showed a handedness split, but not a large one. These are Winker’s OPS: LHP vs. RHP

In the major leagues, Winker’s split has become much more pronounced:

A cleaner way to look at this is with the composite RC+ which takes into account the run environment:

Yes, that’s a minus sign in 2017, but it was Winker’s first year in the big leagues.

For Winker’s major league career, here are his splits:

First, let’s recognize that Winker mashes right-handed pitching. Navigating through slumps and injuries Jesse Winker has produced as long as the pitcher throws with his right hand. That not only is a cause to celebrate, but it also somewhat undermines the argument that Winker’s lack of playing time against lefties hurts against RHP. Yesterday’s game was an example of that.

It is equally clear that Jesse Winker has failed to do anything against lefties, including long periods of sustained lack of productivity. For example, in May 2018, Winker went the entire month and 24 plate appearances without a hit against LHP. So far in 2019, he doesn’t have an extra-base hit in 39 PA.

But are the alternatives better?

Phillip Ervin has proven to be a much better hitter against lefties than Winker. It’s not a close call. The difference is enormous.

Based on their numbers so far, Winker and Ervin could produce a left fielder with a wRC+ in the range of 133. That’s 33% better than the average major league hitter. To provide some context, Eugenio Suarez’s wRC+ last year was 135. Scooter Gennett’s two seasons with the Reds were 123 and 125 in wRC+.

It’s easy to see why David Bell pinch-hits for Jesse Winker. It gives him the best chance to win, especially with a team that has been looking for ways to score runs.

But what about Winker’s development?

One argument for using Winker against LHP is his development. With added practice, Jesse Winker could become a better hitter against major league lefties and then the Reds wouldn’t have to platoon.

Bell does try to get Winker a few at bats in games when the Reds are way ahead or behind. But opportunities like that have been scarce of late.

Here’s what the data indicates. There’s little evidence, either in his experience in the majors or minors that when Winker gets regular at bats against lefties he hits them better. A player’s improvement isn’t a certainty. Some hitters never get better counteracting their handedness gap.

In this case, even if Jesse Winker made a bit of progress, it wouldn’t come close to erasing the enormous gap between him and the alternative of Phillip Ervin.

And what of the development of Phillip Ervin and, to a lesser extent, Jose Peraza?

The identical case be made for Ervin and Peraza getting more major league experience against LHP. Presumably, wouldn’t they key developing, too?

This is not a Scott Hatteburg situation. It is not as though a veteran is blocking Winker’s development. The club isn’t sacrificing the future for the present. Both Winker and his platoon partners are, if they are anything, part of the future.

Hey, what about the example of Joey Votto?

Joey Votto, like Jesse Winker, bats left-handed. Can the argument be sustained that Joey Votto is a down home example of a player who learned how to hit left-handed pitchers? Maybe with enough experience, Winker could follow Votto’s path and rake against lefties.

First, expecting any player to follow the development path of the greatest Reds hitter of all time is an over-reach. Votto is an all-time superstar exactly because he does things that other people can’t. Just because Votto and Winker are both left-handed doesn’t mean Jesse Winker is the next Joey Votto.

The data from Votto’s career isn’t a snug fit to that narrative anyhow. Votto did have a wicked handedness split in the minor leagues.

But that’s where the similarity with Jesse Winker ends. Joey Votto never had a learning curve in the major leagues against LHP. He was great at it right away.

Joey Votto never had a bad major league season against lefties. He doesn’t match the pattern shown by Jesse Winker.

Based on the data, it’s hard to question David Bell’s decision to limit Jesse Winker’s at bats against left-handed pitching. In Phillip Ervin, so far at least, Bell has a good platoon partner.

Yes, the Reds could prioritize Jesse Winker’s development over that of other players. They could keep sending him up for regular at bats against LHP in hope Winker will get somewhere new. They could be stubborn about it.

But that strategy would come at a cost. A big one. Batting Ervin instead of Winker against lefties has given the Reds a much, MUCH better chance of producing offense.

That might not be the answer Reds fans who love Jesse Winker want. But it’s the one they need.