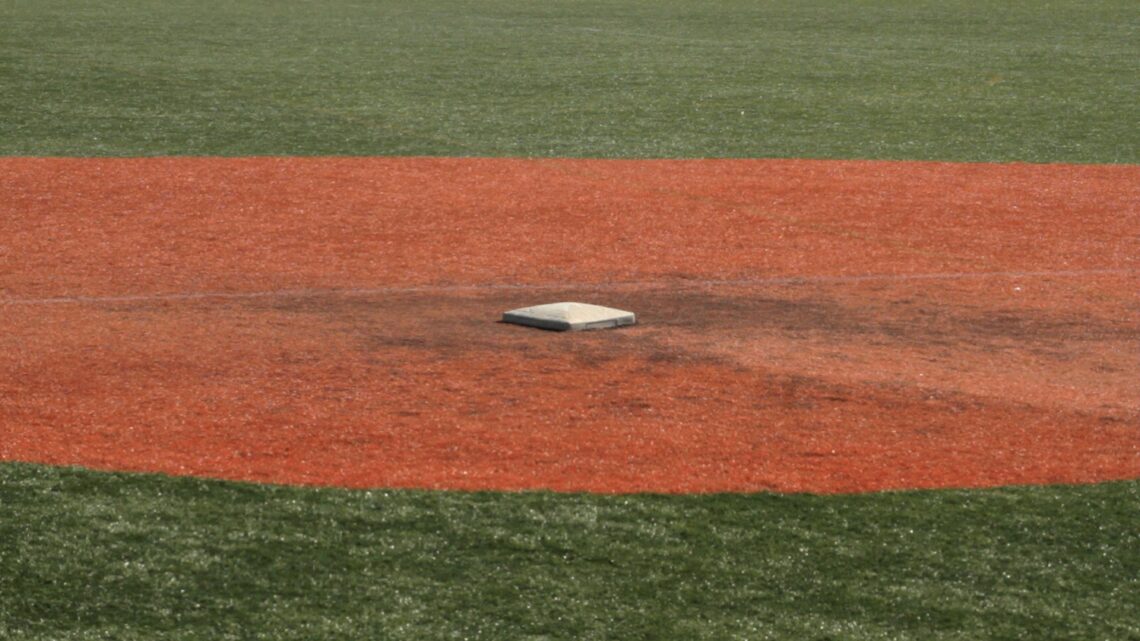 Since the days of the first Billy Hamilton in the late 1800s, stolen bases have been an art form in baseball. In a game with plenty of downtime, those three or four seconds after a baserunner breaks for second base provide a moment where everyone in the stadium holds their collective breath, eagerly anticipating what will happen.

Rickey Henderson became a superstar because of his ability to swipe bases. Some of baseball’s biggest moments occurred due to a stolen base. Jackie Robinson took home in Game 1 of the 1955 World Series. Dave Roberts’ steal of second base in Game Four of the 2004 ALCS ignited a Red Sox comeback in the series and eventual drought-breaking championship run.

But despite the exhilaration they bring, stolen bases are on the decline. In fact, steal attempts have steadily decreased since the late 1980s, with a particularly sharp drop in the last decade.

The idea that stolen bases were overvalued started to gain momentum after Moneyball came out in 2003. The A’s famously took advantage of market inefficiencies because other teams undervalued on-base percentage and overvalued steals and home runs. But Billy Beane’s team also emphasized the importance of preserving outs. After all, a team only gets 27 of them per game. Trying to steal a base means risking one of those precious outs. Unsurprisingly, no team has fewer stolen base attempts since the turn of the century than Oakland.

The Reds, along with the rest of baseball, have followed a similar trend. 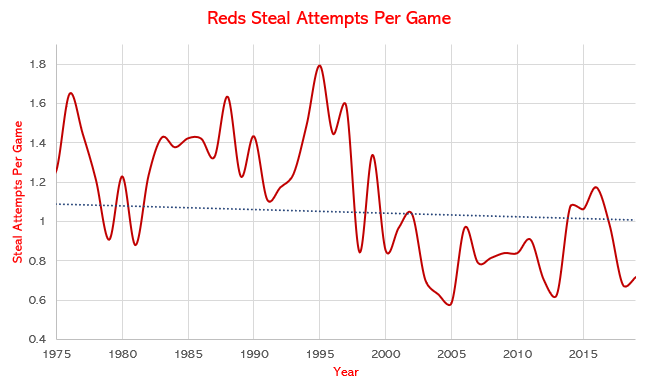 Since the mid-’90s, the Reds have seen a fairly steep drop in steal attempts. While teams certainly didn’t value each out in the mid-1990s the way they do now, the emphasis on the home run ball likely played a part.

The spike after the 2013 season sticks out, though, and it has one explanation: Billy Hamilton.

Without Hamilton, who accounted for 40% of the team’s steal attempts between 2014 and 2018, this year’s Reds are attempting close to 0.7 steals per game. But the downward trend actually began while Hamilton was still in Cincinnati. Last season, he attempted a career-low 44 steals despite playing in 153 games. Before that, he had never tried swiping bases fewer than 65 times in a season.

Why did he have such a drop-off in attempts? His on-base percentage was dreadful as usual, but it was identical to his 2017 season (.299), when he stole 59 bases. When he got on base, however, he stopped stealing as frequently.

The following table shows how often Hamilton attempted to steal when he got on base in each of his full seasons with the Reds (TOB = times on base):

Perhaps he had more runners on base in front of him than usual and couldn’t steal. That, however, wouldn’t explain such a steep decline, especially since he batted first or ninth in most games. Was he nursing an injury? Possibly, but he didn’t spend a day on the injured list for the first time since 2014. His average sprint speed, as measured by Statcast, also stayed consistent between 2017 and 2018 (30.1 ft/s), which would seemingly indicate his legs were healthy.

Even without the analytically inclined coaching staff currently in place, did the Reds make it a point to steal less last season? That theory seems possible, especially if the front office had a larger say with an interim manager in place. In 2017, the team attempted an average of nearly one stolen base each game. Last year, that dropped to 0.68 per game.

Regardless of the cause in 2018, the Reds’ stolen base attempts are at a similar level this year. All of this begs the question: Why is the stolen base a dying art form?

The Issue With Stolen Bases

Before analytics took hold in baseball, the only stats to track baserunning were the stolen base and caught stealing. Players who were otherwise unproductive held roster spots because they could swipe bases (see: Patterson, Corey and Taveras, Willy).

Know, the baseball world knows stolen bases aren’t the best way to analyze baserunning, let alone decide who should get a roster spot. Steals don’t account for other events that could help or hurt a team. A player could go from first to third on a single. They could get thrown out trying to take an extra base. They could fail to advance on a ball that the average baserunner would’ve. Matt Habel covered this aspect of baserunning, as well as FanGraphs’ BsR metric, to explain why the Reds have been so poor on the basepaths this season.

That, of course, doesn’t explain why fewer teams are trying to steal.

First, let’s get this out of the way: stolen bases aren’t bad. Advancing a base is always a positive because it increases the chances of scoring. Steals are the most common way to do this without a ball being put into play. They have, however, been overrated throughout the history of baseball. Why? It comes down to simple cost-benefit analysis.

Let’s use the 2019 run expectancies from Baseball Prospectus to illustrate this. If Nick Senzel steals second base with one out, the Reds’ run expectancy moves from 0.56 to 0.71. It’s not a tremendous difference, but better odds are better odds. (Note: These numbers are also based on the major-league average run expectancies in 2019; individual situations with certain players may slightly alter those numbers in reality. But they provide a solid starting point.)

However, if Senzel is caught stealing in that situation, the run expectancy falls to 0.12 that inning. The cost of getting thrown out while trying to steal (-0.44 runs expected) is three times higher than the benefit of a successful attempt (+0.15).

This logic has become common knowledge and is the primary reason stolen bases are down. The common estimate says it takes a 75% steal success rate to provide overall positive value. That percentage generally applies with a runner on first and fewer than two outs. Over the course of a season, a team can cost itself numerous runs if its stolen base percentage falls below that mark.

The run expectancy numbers above show how baseball analysts arrived at that conclusion. Taking the numbers from the first scenario above (runner on first, one out), it would take three steals (+0.45 run expectancy) in such situations to outweigh the cost of one caught stealing (-0.44).

Are there any times when it takes fewer than three stolen bases to provide more value than a single caught stealing takes away?

Attempting a steal with two outs and a runner on first is one the least risky situations in terms of run expectancy. As you can see in the last Senzel example above, it takes approximately 2.5 successful attempts to match the cost of being thrown out one time. In other situations, it can take more than six successful steals to break even.

Here’s the breakdown using 2019 run expectancies (steals of home are not included because they’re extremely rare):

And here’s the breakdown for a double steal since that can have several different outcomes:

A key for each of these abbreviations:

With only one runner trying to steal, the “safest” time to do so is with: 1.) a runner on first and two outs, or 2.) a runner on second and one out. During a double steal, the risk isn’t as high with fewer than two outs because the batting team stands a lot to gain by having two runners in scoring position, and it will still have a runner on second or third base even if one runner is thrown out. In the most common steal situations, though — a runner on first attempting to swipe second — the 75% rule applies.

A steal is one of the most exciting plays in baseball, but teams have learned it’s not worth the risk with some runners and in certain situations. It’s easier to score with one swing of the bat than to try swiping a base. That doesn’t mean stolen bases will go extinct, nor that teams should stop attempting them altogether. Speed is still a valuable asset on the bases and defense. But managers are being more calculated in their decisions to steal, and that includes David Bell.

We’ll dive more into the Reds’ approach to stealing bases in 2019 and their success—or lack thereof—in part two.