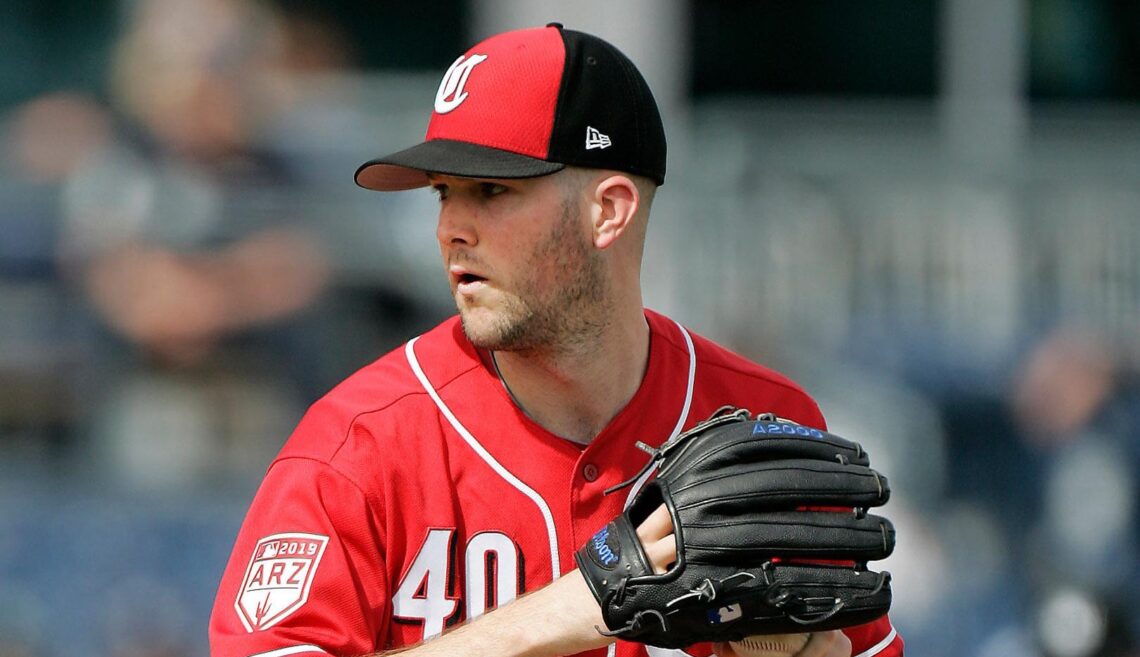 The club let Matt Kemp play for about a month then cut him. Yasiel Puig started slow but has come on, hitting .300/.347/.581 (wRC+ 134) the past two and a half months. Kyle Farmer has been a versatile role player with pop in his bat. Farmer has played 1B, 2B, 3B and even caught 4 games.

Pitcher Alex Wood has been a missing acquisition, sidelined with a back injury since spring training and yet to enter a regular season game for the Reds. That absence will come to an end this afternoon when he takes the mound against the Rockies.

So who is Alex Wood and what can Reds fans expect from him?

Wood is 28, stands 6’4” and throws left-handed. The Atlanta Braves drafted him in the 2nd round of the 2012 draft out of the University of Georgia. Wood shot through the Braves system and debuted as a reliever at age 22 on May 30, 2013. He pitched one inning in that first appearance.

Wood served as both a starter and reliever for the Braves in 2013 and 2014. He started 20 games for Atlanta in 2015 then was traded to the LA Dodgers at the 2015 deadline. Two other players going from Atlanta to LA in that deal were Jose Peraza and Bronson Arroyo.

Alex Wood is signed through 2019 and becomes a free agent next season.

What to Expect When Wood is on the Mound

As far as his pitch repertoire goes, Alex Wood throws his fastball (sinker) about 43% of the time. The average velocity is between 90-92. The rest of the time, he throws an 84-mph circle change (26%) and an 83-mph curveball/slider (30%). Over time, his percentage use of fastball/sinker has declined. 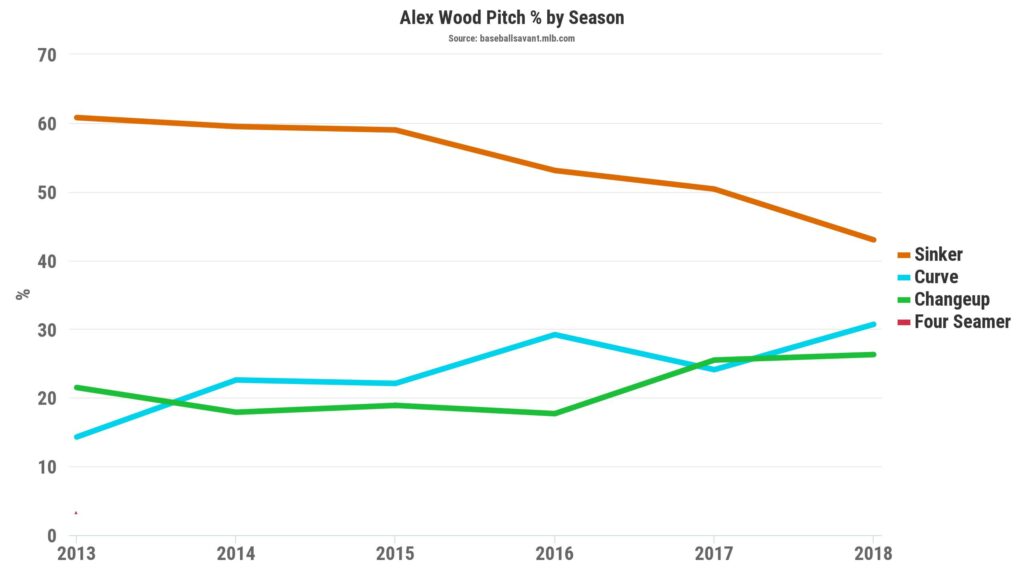 Wood’s strikeout rate has been above league average most of the time. 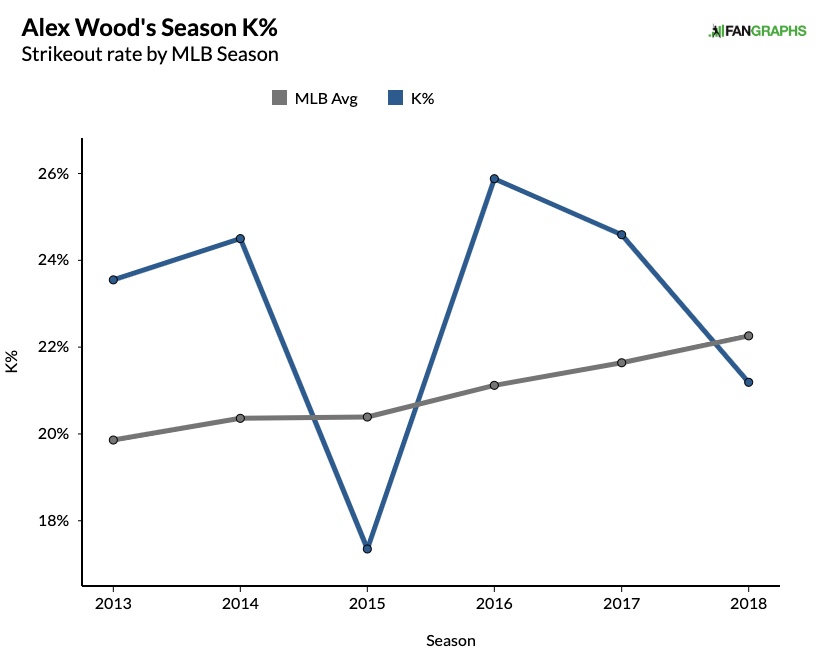 His walk-rate has been well below league average. 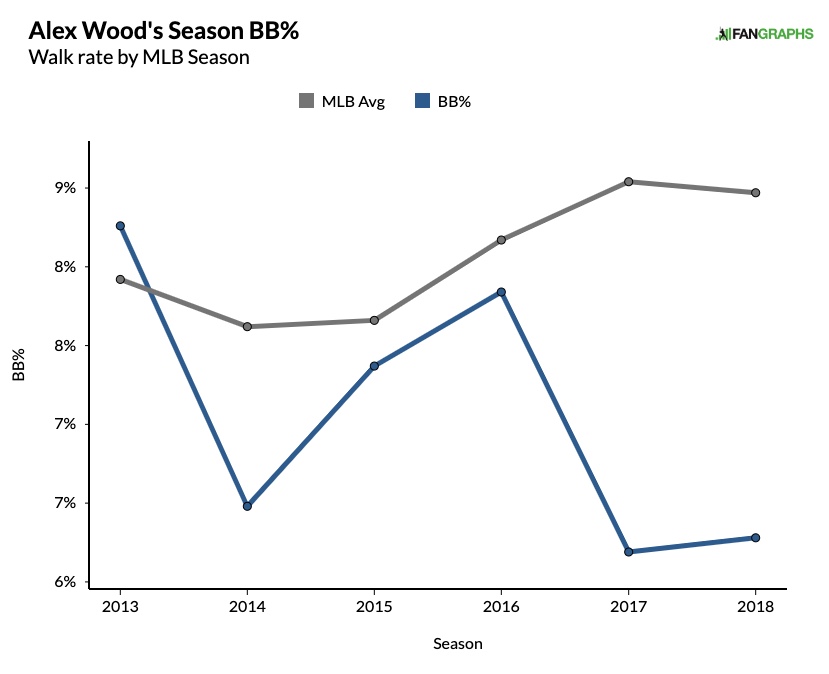 Wood has a good ground ball rate, as you would expect with a pitcher throwing a fastball with sink. 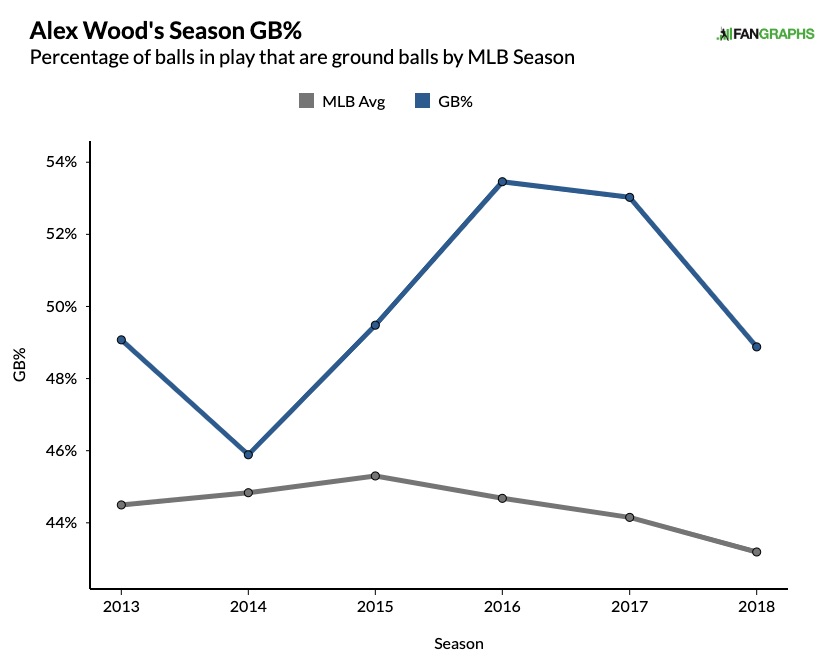 When you put it all together, Wood has been an effective pitcher. This is a graph of his FIP- (red line) and xFIP- (blue line). Remember the “minus” means the stats are on a 100-point scale where 100 is league average. Being below 100 — and Wood has spent his entire career below, often well below — is the good side. 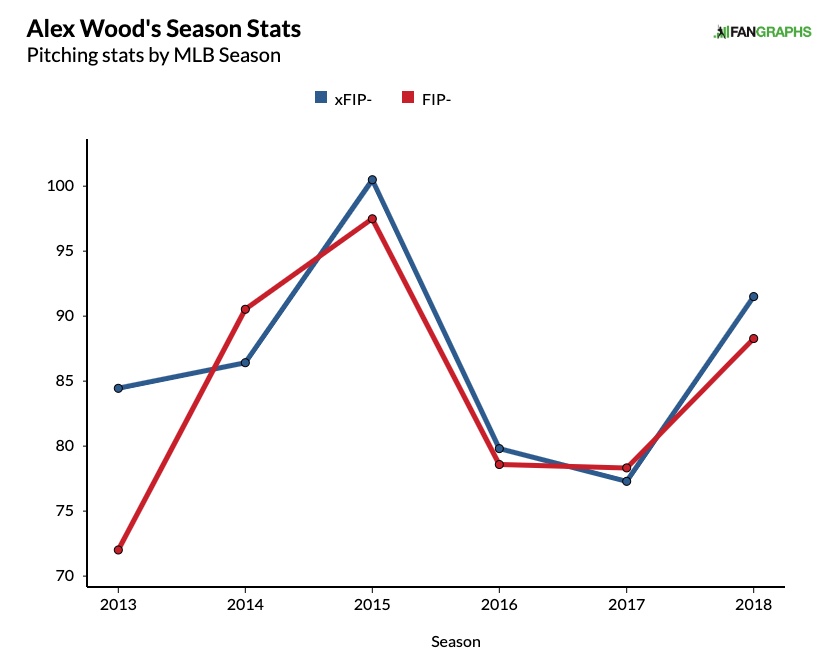 What About Wood’s Health?

Wood has never had a back issue prior to this year. He did not make the Disabled List in 2013, 2014 or 2015. With the Dodgers in 2016, he was out with a sore left triceps muscle from June to September. He did make the Dodgers postseason roster in 2016.

Wood was on the DL twice in 2017 with a sore SC joint. (The SC joint is part of the shoulder. It’s at the front of your chest where the top of your breastbone meets your collarbone at the base of your neck below your head.) Both times Gray was back in 10 days, the minimum time away for someone on the DL. In August 2018, the Dodgers put him on the DL for left adductor (thigh) tendonitis. Again, Wood was back in 10 days.

Worth noting: It has been suggested the Dodgers manipulated the new 10-day DL/IL rule to give their starting pitchers a rest. That Wood returned immediately at the end of three separate 10-day stints is, um, curious.

So, if you discount R&R with the Dodgers, Wood has had one significant injury his 6-year big league career, the triceps muscle in 2016. Before 2019, that is.

Alex Wood made a 1-inning start for the Reds in late February then was shut down with a lower back strain. He’s had several dreaded “setbacks” over the next five months.

This month, Wood has made four rehab starts starting on July 6 with Louisville-AAA. He pitched 5.1 innings over three games for the Bats. Most recently, he went 6 innings for AA-Chattanooga, with 4 Ks and no walks.

Where Does Wood Fit in the Reds Plans?

Sigh. If Alex Wood had pitched healthy for the Reds this year, he likely would have performed at the same level as Sonny Gray and Luis Castillo, giving the Reds an excellent third starter. Wood was a key piece of the Dodgers trade and given his pretty good health record (for a pitcher), the Reds have been unlucky.

On the other hand, Wood’s absence probably created space for Tyler Mahle, which has been a strongly positive development for the Reds. So while we’re pondering counterfactuals, think of the one where Mahle spent all of 2019 toiling in AAA.

It would be a shock if Alex Wood isn’t rusty. It’s hard to sit out two-thirds of the season and come back and perform on equal footing with major league players. Ask Scooter Gennett about that. Then again, Wood shouldn’t suffer from fatigue that pitchers often do this time of year. He might benefit like other Reds pitchers from the coaching staff. And Wood has a free agent contract to worry about.

Speaking of that. Chad Dotson wrote an article for Cincinnati Magazine last month where he describes Wood accurately as a quintessential No. 2 starter in any rotation, when healthy. Chad made the case for the Reds to sign Wood to a short extension. Wood might be attracted to the security and not having to face a highly uncertain free agent market. The Reds would first have to judge whether Wood has overcome his back strain and returned to form. Players this close to free agency seldom give hometown discounts, but this is a special circumstance.

While it would have been wonderful to have a healthy Alex Wood all season, his return to the rotation right now is good timing. Odds are the Reds will move Tanner Roark in the next few days, opening up a regular rotation spot for Wood. If Roark remains a Red and Tyler Mahle returns on schedule, Wood could work from the bullpen, where he has experience. He might become the top lefty reliever for the Reds if they trade Amir Garrett in coming days.

The Reds have an interesting asset in Alex Wood. Wood has been an excellent pitcher. It will be fascinating to watch how his time with the Reds transpires. And that starts today at 1:10 p.m.

If Wood is good today, could you see the Reds trading him before the end of the week? Based on his track record and being LH starter, I could see a scenario where a team offers up a decent prospect or maybe a Clint Frasier from the Yankees. I only give it a 10% chance of happening, but would love that move to be made.

If the Yankees offered Frazier for Wood, the Reds would jump on that in a heartbeat. Not sure teams will value Wood all that highly given his injury history, but he does have some postseason experience and pitches from the left side. It’ll be interesting to see what the front office does with him.