The Reds evened things up with the Braves last night with an all-team 5-2 win. They got strong starting pitching from Alex Wood and excellent relief pitching from Michael Lorenzen and Raisel Iglesias. The hitters, led by Joey Votto did enough.

Now they have Trevor Bauer and Sonny Gray going in the last two games of the series. Today, in particular, is the debut of one Mr. Trevor Bauer, recently acquired from Cleveland in the Reds biggest move at the trade deadline. Bauer had a terrific season in 2018. He might have won the A.L. Cy Young award had he not suffered a broken leg in August after being hit by a line drive. 2019 hasn’t been up to the same standard, but there were aggravating circumstances that have since disappeared. The Reds clearly expect (and paid for) a guy closer to Bauer 2018 than Bauer 2019.

You can read all about Trevor Bauer’s background, his pitch arsenal, past performance and those aggravating circumstances here.

As you recall, Dallas Keuchel found an unsatisfying free agent market in the offseason and sat out the first few months of 2019. He agreed to a 1-year, $13 million contract with the Braves on June 6. He made his first start about two weeks later. Keuchel’s best year, by far, was 2015 with the Astros, a year he won the A.L. Cy Young award. Since then, he’s remained a solid, but not elite starter. The problem with his free agent market was that Keuchel wanted to be paid like a Cy Young winner and he really hasn’t been that for a number of seasons. Keuchel’s fastball velocity (88 mph, it’s really a sinker) is one of the lowest in the league. So is his strikeout rate. He’s a extreme ground ball pitcher.

Bauer is most known for his curveball, which has an astonishing 9.3 inches of vertical drop (that takes into account natural fall from gravity). That’s the nastiest bite for any major league pitcher who has thrown at least 100 curves.

Reds with the platoon lineup vs. lefties. No Jesse Winker. No Josh VanMeter. No Derek Dietrich. Instead, Phillip Ervin, Aristides Aquino and Jose Peraza. 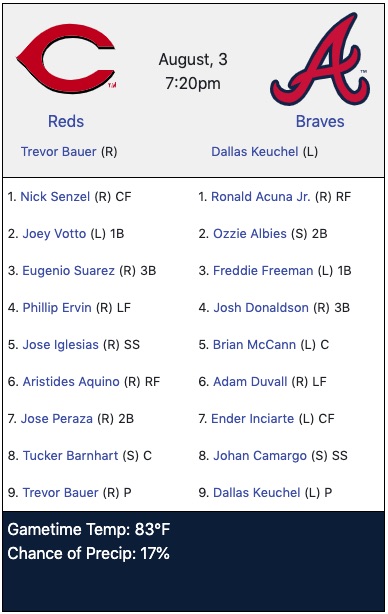 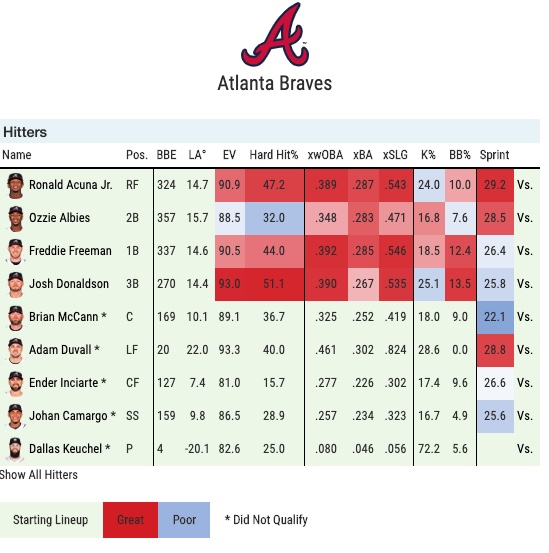 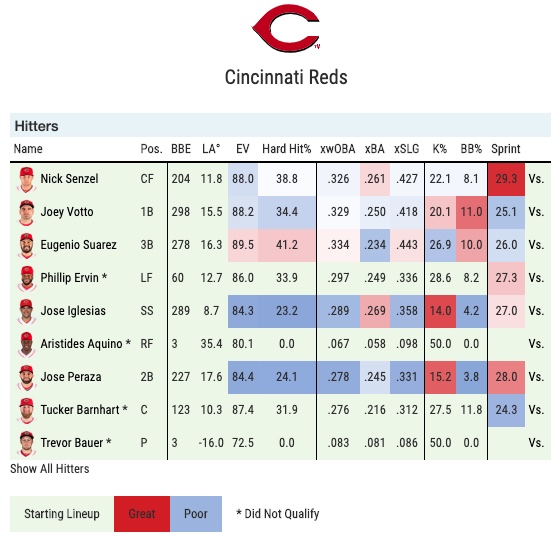 Bauer throwing a lot of breaking balls. Need to get the bats going.