The ending of Friday night’s game was befitting of the hideous uniforms the Reds were wearing.

Despite some late-inning heroics from Aristides Aquino to break a 1-1 tie with the Pirates, Raisel Iglesias imploded once again in the final inning in a 3-2 loss. The win probability chart says it all:

Iglesias gave up three straight singles to start the inning, recorded an out on a sacrifice bunt, and allowed a walk-off single. None of the four hits Iglesias allowed were particularly hard hit — only one exceeded the 95-mph threshold Statcast deems “hard” contact. The singles had exit velocities of 90.5, 74.8, 66.5, and 96.5 mph. None were particularly egregious in terms of location, either, although he did miss his spot on an 0-2 pitch to Colin Moran, who singled to start the inning: 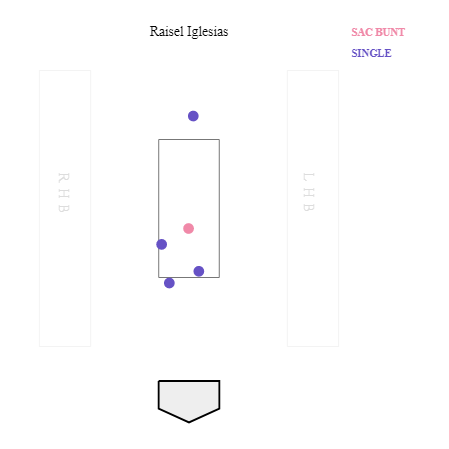 Aquino was the driving force of the offense once again. He had four hard-hit balls on the night — the rest of the lineup had two combined — and the third-hardest was his home run. That dinger got the Reds on the board in the second inning and set a new record for fewest games to get to 12 career home runs. He came through later with the go-ahead double in the eighth.

The Reds missed a huge opportunity to blow the game open in the seventh inning. After putting runners on first and third with no outs against starter Mitch Keller, the Pirates turned to Michael Feliz out of the bullpen. Derek Dietrich, Nick Senzel, and Brian O’Grady didn’t manage to put a single ball in play, all striking out. The sequence dropped the Reds’ win probability from 71.9% to 41.6%.

Anthony DeSclafani had a solid night on the mound, throwing six inning of one-run baseball. He didn’t allow a home run for the first time in five starts. It was just the 10th time in 25 outings that he didn’t allow a long ball. Disco didn’t rely on swings and misses, only registering three on 80 pitches, but he got a healthy dose of ground balls (61.1%) by primarily his slider.

Robert Stephenson and Amir Garrett pitched two scoreless innings in relief. Stephenson overcame an ugly error on a dropped pop-up by Eugenio Suarez and struck out Kevin Newman with a runner on third base in the seventh. Garrett threw a perfect eighth inning.