No Reds fan is happy about losing 3 of 4 from the stupid Cardinals. And if you continue to live and die with every game outcome, I get it and won’t judge. Nonetheless, the mounting number of Reds losses affords us an opportunity. It’s not one we wanted. But it’s available to choose.

We can quit obsessing about the W-L column and scoreboards. Instead, we use September to get a good look at the Reds future. Again, that’s not what we hoped for this year, but it is where we are. Think of it as a mental health break.

With that in mind, my thoughts on the Spectacle in St. Louis:

1. The Slog. Four games in two days is torture for fans, the players, the managers, the broadcasters, the ushers, the vendors, everyone. I suppose it helps with coping if your team keeps pulling out one miraculous win after another. Otherwise, it’s an utter slog. Please, no more.

2. Tyler Mahle. The Reds got superlative pitching from Tyler Mahle. Mahle’s season deserves, and will get, a longer treatment, but he’s really had a terrific year of improvement. If you look at what the pitcher controls (and you should): strikeouts up, walks way down, ground ball rate up, fastball velocity up and spin rate up. That has led to lower xFIP, wOBA, SIERA and xwOBA, all the more impressive because of the run environment this year. Quit looking at his (and any other) ERA. It’s a team stat, susceptible to teammates defense and relief pitching and luck streaks.

Thanks to Enquirer reporter Bobby Nightengale for this stat: Mahle has left games this season with 9 runners on base (those are called “bequeathed runners”), all 9 ended up scoring. By comparison, when Tanner Roark was with the Reds, he bequeathed 14 runners to the bullpen and only two scored. Those bequeathed runs count fully on a starter’s ERA. If none of Mahle’s bequeathed runners scored, it would lower his ERA from 4.72 to 3.97. Yes, starters should have liability for letting runners on base, but the inequity in outcome is still a reason to be skeptical of ERA as a measure of individual pitchers.

3. Sonny Gray. Gray turned in another tremendous start on a big stage. He’s in the running for N.L. Pitcher of the Month. Gray is having the best year of his career at age 29 and the Reds have him for three more seasons after this one for a good price.

4. Luis Castillo. The walk bug bit Castillo again. Two of the three runs he gave up got on base by free passes. Otherwise, he had a strong start, with 8 strikeouts over 6 innings. Castillo is 26 and will be with the Reds through 2023.

5. Eugenio Suarez. We’re holding our collective breath this morning pending the x-ray results of his hand. If you don’t know, he was struck [video] by a pitched ball late in yesterday’s night game. Suarez left the game. The Reds announced they wouldn’t be able to take a look at it until today back in Cincinnati due to swelling. Suarez lost a couple weeks last season to the same thing. He’s not in today’s lineup.

Before he was HBP though, Suarez had hit homers #39 and #40 in the series. That puts him in rarified air. Suarez is just the 9th Reds player hit 40 homers in a season. Only 6 players from Venezuala have ever done it. No Reds third baseman has ever hit 4o in a season.

Suarez, who just turned 28, is signed to an extremely team-friendly deal through 2024 with a team option for 2025.

6. The Bullpen. Inconsistency on full display. Raisel Iglesias blew a game and saved a game. Michael Lorenzen had dominant innings and gave up a big run. Kevin Gausman and Robert Stephenson continued to show promise. Amir Garrett’s walk-rate has skyrocketed. Matt Wilkes came up with this during the slog: 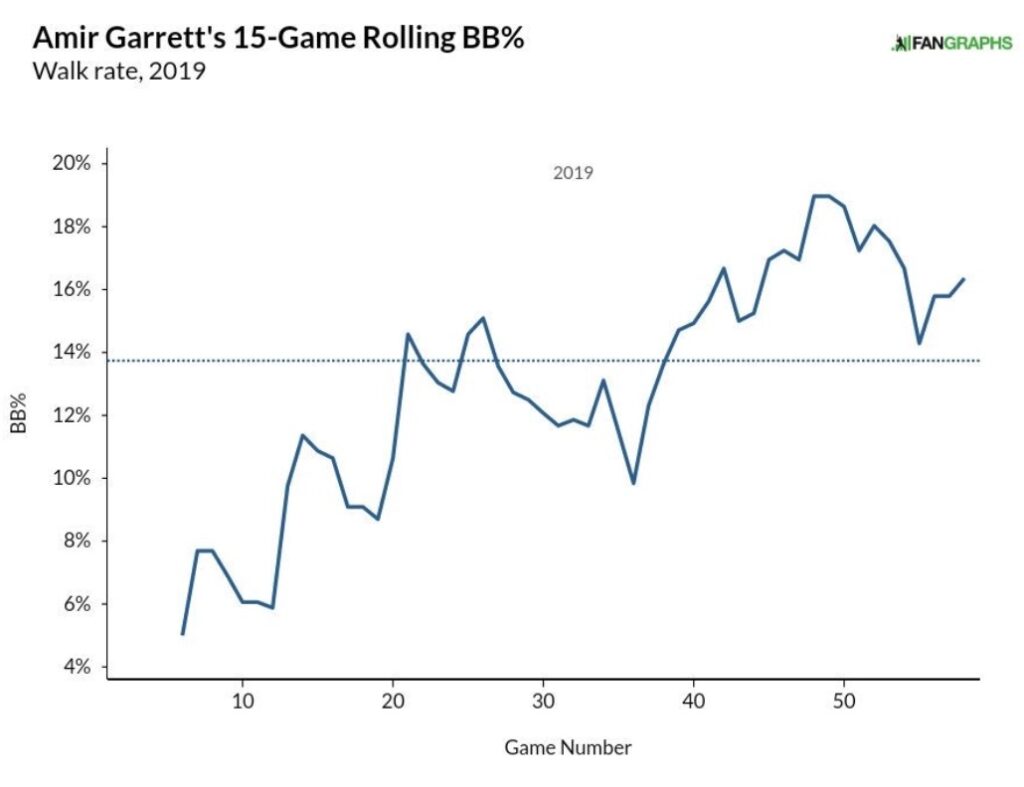 Note the horizontal line in the middle is not the league average walk rate. It’s Garrett’s average OF NEARLY 14%. League average for relievers — and remember, there are a LOT of terrible relievers, is 9.6%. Garrett’s walk rate is now 14.1%. Only a handful of relief pitchers have a higher rate. And there a LOT Of terrible relievers, have I mentioned that? Anyhow, Garrett has had many brilliant moments this season, but you can’t walk that many batters and make it. Garrett walked the first batter he faced in yesterday’s day game. Then he threw the ball into the stands on a pickoff attempt.

Inconsistent. Repeat after me: This is why they are relief pitchers.

7. Defensive Lapses. It’s hard to know what to make of this. Defensive mistakes continue to plague the team. Many were by pitchers throwing to first base or dropping balls when covering first. Josh VanMeter had a couple. Phillip Ervin’s throws from the outfield appear to have random direction and arc. It’s the worst I’ve witnessed for a Reds player. It’s hard to see how the Reds can afford to play him in the field, particularly late in a close game. His bat plays, his arm sits. Unearned runs matter.

The Reds gave up unearned runs in both of the heartbreaking 1-run losses.

8. The Bats. The Reds got solid offensive contributions from Joey Votto, VanMeter, Suarez, Tucker Barnhart and Ervin this weekend. Nick Senzel hit his 12th home run. The offense averaged 4 runs per game, which is OK.

9. The Stupid Cardinals. Give the Cardinals their due. They are playing well, with the best record in the NL since the All-Star break. On top of that, a lot of things went right for them. When you’re up against a team playing that well, there is no margin for error, especially on the road. Base running mistakes, wild throws, errors, walks, swinging at pitches way out of the strike zone, etc. make it hard to win. An unearned run or two might not cost a game against the Marlins, but it will against the St. Louis Cardinals.

10. Yet. The Reds outplayed the Cardinals for a majority of the series. In game two, they built a 2-0 lead through 6 innings and a 2-1 lead through 8. In Sunday’s afternoon game, they built a 3-1 lead through six and 3-2 lead for seven. In game four they led all but an inning and a half. Yes, relief pitching absolutely counts as part of the team. But if you’re looking beyond the bottom line, the Reds played at least as well as the Cardinals in the series.

11. The Resilience. The Reds bounced back after tough losses in each of the first three games. After two crushing, late-inning losses, they rallied their spirits enough to win the Sunday night game.

The weekend series in St. Louis wasn’t what Reds fans hoped for. We wanted the Reds to do a lot more spoiling of Cardinal postseason plans. But if you choose to get past the frustration, look through the smoke and wreckage, there are plenty of positives to find. Again, if you choose to look for them. I recommend you do. 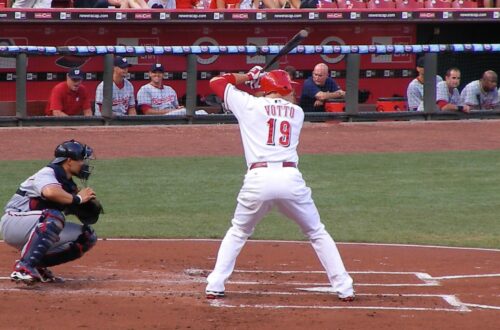 Get Your Day Off to a Great Stat! 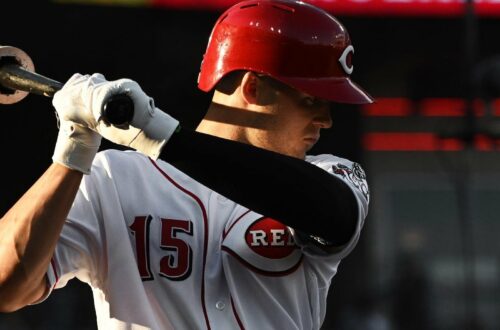 Well said. Suarez has had an important season. 40 HR is Adam Dunn territory. Clean up the defense.

I’ll add Aristino Aquino as another reason for optimism in September.

Just seems hard to believe the Reds have so much trouble finishing the deal against the Cardinals. If it’s not one thing, it’s another. The defense/baserunning stuff is what bothers me. Do other teams shoot themselves in the foot as much as the Reds do, and I just don’t see it since I mostly watch the Reds? “No margin for error” does sum that up nicely. You don’t even have a chance to win those games if you’re not standing toe to toe with them, however.

I want some look-ahead positives, by glimpsing what the future holds. If the Reds are auditioning Galvis as next year’s shortstop, here’s a wacky idea. Play him at short. Or give him the lefty-hitting half of a platoon at short with Jose Iglesias. Keep second base open for VanMeter. If VanMeter is needed in the outfield, let Blandino play second. … What do the Reds “owe” to Jose Iglesias to keep playing him every day if he is not in their future? He has spent 5 months showing other teams what he can do. Time off in September is not going to change that.

I agree with you about playing Galvis ahead of Iglesias and VanMeter at 2B. But I’m afraid the Reds are still thinking of re-signing Iglesias (assuming Iglesias wants that). If they want to build a group of position players based on Iglesias A+ defense, fine. But no way should they assume he’ll contribute offensively. I have the same reservation about Galvis, frankly. His career offensive numbers are way below average and worse than Iglesias. At least in Galvis case, his good season comes with a lot of power.