For a few innings, it looked like the Reds would cruise to a much-needed easy win against the Phillies on Wednesday. But after they blew a five-run lead, capped by a painful game-tying solo shot by Jay Bruce, the pitcher who gave up the home run was one of the heroes in an 8-5 win.

That pitcher was Michael Lorenzen. He threw two clean innings aside from that home run, but his heroics came at the plate. Jose Iglesias put the Reds back on top with a home run (101.2 mph, 405 feet) to straightaway center field in the seventh inning.

Lorenzen added the insurance runs in the eighth with his first homer of the year (100.7 mph, 387 feet). It was Lorenzen’s seventh career homer, each coming in Great American Ball Park. He may not be an everyday hitter, but he should have more than 19 plate appearances this season. Here’s what Lorenzen has done when putting the bat on the ball this season:

Freddy Galvis almost had a home run sandwiched between the Iglesias and Lorenzen blasts, but he was robbed on a spectacular play by Phillies center fielder Adam Hasely.

Joey Votto, who was 3-for-4, got the Reds in front early with a first-inning home run (104.5 mph, 395 feet) to the opposite field. They added four more runs in the second. Brian O’Grady smashed his first career extra-base hit, a triple that almost left the yard (407 feet). Following a walk to Bauer, Josh VanMeter laced a single (100.8 mph) to plate the second run, Votto added an RBI double down the right-field line, and Aristides Aquino hit a two-run double down the left-field line.

This all came against Phillies ace Aaron Nola, who had been one of the best pitchers in the NL of late. Meanwhile, Trevor Bauer appeared to be in control early — but it all fell apart again.

Bauer took an extreme fastball-heavy approach. Coming into the game, he had used his four-seamer 37.5% of the time. He used it at a 61.8% clip on Wednesday, his highest rate in a game since Aug. 18, 2015. Bauer didn’t throw his first breaking ball until the second inning, his 31st pitch of the game.

It wasn’t effective. Bauer’s four-seamer only got four whiffs and was hit for a 96.0 mph average exit velocity. He avoided any damage until the fifth inning, however, when he gave up a pair of two-run homers to Logan Morrison and J.T. Realmuto. In Bauer’s defense, the Realmuto home run was unlucky. It was hit at only 92.4 mph and had a .100 xBA. Per @RedsFan_Brandon on Twitter, it was only the 47th of more than 5,800 home runs hit this season hit at or below 92.5 mph.

Robert Stephenson, who has become David Bell’s No. 3 guy out of the ‘pen, threw a perfect sixth inning behind a rare fastball-heavy approach. Raisel Iglesias threw a shutout ninth. 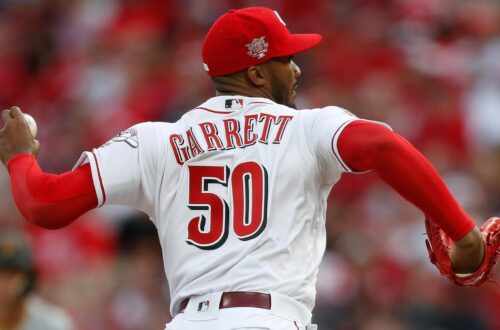 Is Amir Garrett throwing too many sliders?

RC+ Recap: Reds on wrong side of history in loss to D’Backs