If the Hot Stove brew of rumor, reporting and reporting rumors is to be believed, the Cincinnati Reds remain in dogged pursuit of a frontline free agent starting pitcher. The front office has had to move on from its interest in 30-year-old Zack Wheeler, formerly of the New York Mets. Wheeler found his preferred match and inked a deal with the Philadelphia Phillies to pay him $118 million over 5 seasons. Turns out Philly’s proximity to New Jersey, his wife’s home, was an important factor in Wheeler’s choice.

The Reds have apparently fixed their gaze elsewhere. The latest object of their affection being another 30-year-old pitcher, former San Francisco Giant Madison Bumgarner. National writers are now speculating that Bumgarner’s contract will also exceed the $100 million threshold.

Most baseball fans remember Bumgarner for that World Series when he single left-handedly beat the Kansas City Royals. Bumgarner started Game One that the Giants won. As an encore, Bumgarner pitched a complete-game shutout in Game Five. And like one of those marathon Springsteen concerts with a second encore, Bumgarner appeared in Game Seven for a FIVE-inning shutout appearance to lock down a 3-2 Giants lead. In total, he’d pitched 21 innings, giving up a solitary earned run, while striking out 17 and walking one.

That indelible performance happened a half-decade ago. A new nine-figure contract for Bumgarner would likely run through 2024.

In other words, the Reds are engaging in a major league version of a Ten Year Challenge. It’s not only fair to ask, it’s essential to figure out. how closely will the 2020-24 Madison Bumgarner resemble that superhuman who awed us in 2014?

The Giants selected Madison Bumgarner with the 10th pick of the 2007 draft. That was eight slots after Mike Moustakas was chosen by Kansas City Royals and five picks before the Reds took Devin Mesoraco. All three of those players were drafted out of high school; in Bumgarner’s case, South Caldwell High School, about an hour away from Charlotte, North Carolina. It was during his time at South Caldwell where he may or may not have dated a girl named Madison Bumgarner.

Bumgarner sailed through San Francisco’s system, earning a cameo with the Giants in 2009 as a 19-year-old. He split the 2010 season between AAA-Fresno and the major leagues, starting 18 games for San Francisco.

Beginning in 2011, Madison Bumgarner began a six-year stretch of making 30+ starts and throwing 200+ innings per year. Those six seasons, from 2011-2016 are the part of Bumgarner’s resumé where he earned his reputation as one of the best starting pitchers in baseball.

He pitched 1276.2 innings over those six regular seasons. Bumgarner struck out 1285 batters, with a 25% strikeout rate. He walked fewer than 6% of the batters he faced. Bumgarner threw 15 complete games.

In five of those six seasons, Bumgarner earned Cy Young votes, finishing as high as 4th twice. Bumgarner made the N.L. All Star team four times and won the Silver Slugger award twice, given to the best hitting pitcher.

Putting it all together, Madison Bumgarner was a dominant 4-WAR pitcher from 2011-2016.

Bumgarner’s streak of six exemplary seasons was derailed for two years by a couple freak injuries.

In April 2017, Bumgarner was involved in a dirt bike accident, bruising his ribs and partly tearing a ligament in his left shoulder. He had four starts prior to that and returned in mid-July for 13 more.

In 2018 spring training, Bumgarner took a line drive off his pitching hand. The ball broke a bone in his pinky finger. Surgery placing three pins to hold the bone in place, plus rehab, kept him out until June 5. Doctors say it takes a full year for the bone to return to 100% strength. Bumgarner made 21 starts.

Note that neither of these are chronic, repeating injuries related to pitching a baseball. Unlike Zack Wheeler, Madison Bumgarner hasn’t had Tommy John surgery.

Strikeout Rate Bumgarner’s strikeout rate (24.1%) recovered from 2018 and was above the NL average for starting pitchers (22.6%). But it wasn’t back to his 2011-2016 level. Keep in mind that over that time the MLB strikeout rate had risen by 2%. So Bumgarner went from 5% above league average in his prime to 1.5% above. His swinging-strike rate (11.6%) was above his career number and exceeded all but one of his prime years.

Ground Ball Rate During his prime years, Bumgarner’s ground-ball percentage (GB%) was 44.4%. But last year, it dropped to 35.8%. The NL average for starters was 43.6%. As Matt Wilkes pointed out to me in a conversation you can get away with those fly balls in San Francisco’s cavernous park, but not so much in GABP.

xFIP Bumgarner’s strikeout, walk and batted ball profile produced an xFIP of 4.31. To provide context, that was 3% better than league average. During his prime he was 15-20% better than average.

Bottom line in these metrics, Bumgarner’s continued strong strikeout and walk rates in 2019 kept his numbers in line with the league, but looking at the actual quality of contact he gave up he fell well behind.

Fastball Velocity Bumgarner has never had a blazing fastball. His career average velocity is 91.4 mph. It was in that range throughout his prime seasons, but did drop a little bit in 2016. His 2019 velocity (91.4 mph) matches his career and is above his 2016 rate. Bumgarner’s 2019 fastball whiff rate was comparable to 2016, but both of those years represented a healthy drop from 2013-2015. That fastball velocity of 91.4 mph is now in the bottom 10 percentile among major league pitchers.

What to make of this? Matt Wilkes and I have written (Matt, Steve) extensively how spin rates matter. On the one hand, it’s great for Bumgarner to have worked on his spin rate. Matt notes that jumps like this are rare. Matt also suggests that the higher fastball spin rate is helping Bumgarner compensate for the drop in his velocity. On the other hand, is it reasonable to expect continued increases?

Bumgarner has 14 postseason starts, including four World Series games. He’s been terrific in October, as the account of his 2014 heroics demonstrates. But part of Bumgarner’s postseason experience is a 9-0 loss to the Reds in Game Two of the 2012 NLDS. That night Bronson Arroyo gave the Reds a 2-0 series lead with seven shutout innings at AT&T Park. (Sigh.)

For 2020, the Giants made Bumgarner a qualifying offer ($17.8 million), but he turned it down and elected free agency. Any team that signs him, beside the Giants, would forfeit a draft pick.

The narrative of Madison Bumgarner’s career has distinct chapters. For his six prime seasons (2011-16) he was one of the best pitchers in the game and especially dominating in the postseason. He spent two years (2017-2018) in injury wilderness. His sub-par performance in those seasons can safely be ignored, particularly because the injuries he suffered were one-off events. Other than those two incidents, he’s never been on the DL. He’s been good for 30 starts and 200 IP. That included 2019.

It’s that most recent chapter — 2019 — that needs the most scrutiny. Because he pitched healthy for an entire season last year, it tells us more about how Bumgarner will pitch going forward than any of his seasons before that.

The positives: In 2019, Madison Bumgarner was a 2.5-3.0 WAR player. He was durable and that’s valuable. He is maintaining excellent strikeout and walk rates. The rapid development of his spin rates shows that he’s still working hard on his craft and looking for ways to incorporate new information and techniques. He’s left-handed.

The negatives: When batters are making contact, they’re hitting the ball hard and in the air. He is well below average in those metrics. That’s the opposite of a recipe for success in Cincinnati. He would cost the Reds a draft pick.

Assessment: The quality of Bumgarner’s pitching in 2019 was about 3% better than average. What sustained his value was durability. If over the next few years, Bumgarner misses time due to injury, that balance will swing negative. Similarly, if he can’t sustain his strikeout and walk excellence, the hard-hit balls will take their toll. As you would expect for a 30-year-old pitcher, especially one with 1948 major league innings pitched (compare that to 749 innings for Zack Wheeler), he’s started his decline phase. He is a pitcher on the rise only in relation to his injury plagued previous two seasons, not versus the league.

There’s a decent chance Bumgarner would be an above average pitcher in the near term. A one-year deal for $18-20 million would make sense. But unless the Reds new-fangled pitching staff works another miracle, he’s no longer a top-of-the-rotation guy. Add to that the flashing warning signs and Bumgarner isn’t a candidate for a long contract like the one the Phillies gave to Zack Wheeler.

Madison Bumgarner is not the pitcher today he was in the bright spotlight of the 2014 World Series, the way most of us remember him. In this particular Ten Year Challenge, one that might cost $100 million, the Reds won’t be signing the handsome young guy on the left. 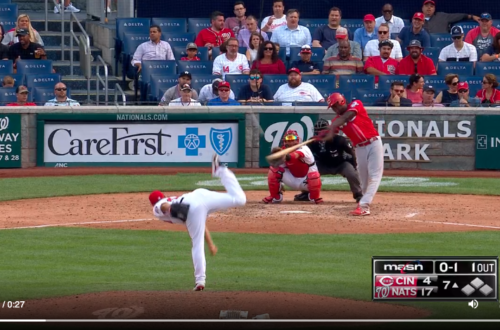 Aquino HR #9: Out of the Strike Zone 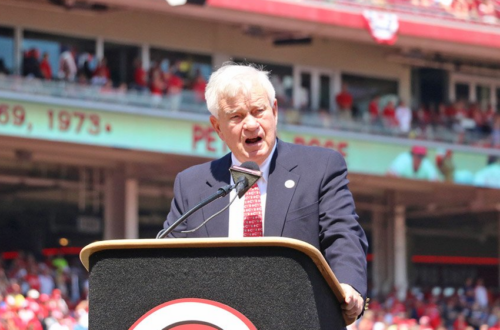 Reds ownership will cut payroll in 2021

Great synopsis. $100 million and 4-5 years is too much and too long. Reds need a lefty starter imo. That said, the Reds are relevant and its been a long time coming.

The Phillies outbid the Reds for Wheeler, let’s outbid them for Didi.

Didi is an upgrade over Galvis. And a multi-year deal would help address a huge and important organizational gap. And Didi is still a flashy defensive SS.

To sign MadBum also comes with the ‘cost’ of not having that money to spend elsewhere. The Reds play in a hitter-friendly ballpark, so they need to be able to score runs. I like Pinson’s idea above!

Yes, the opportunity cost is the key. I’m not sure why the Reds are players in these pricy starting pitcher negotiations when they need more help on offense. Only thing I can think of is they already have in place a trade for a bat that involves sending out a current SP. I’m fine with that, but Bumgarner isn’t the right guy for a 5-year deal. Wheeler, maybe, but not MadBum.

Dick Williams is clear this weekend the Reds are now focusing resources to sustain a “winning arc” per C Trent. I’m very optimistic they will pivot resources in the changing market to get the best team to put on the field in 2020. Go Reds.