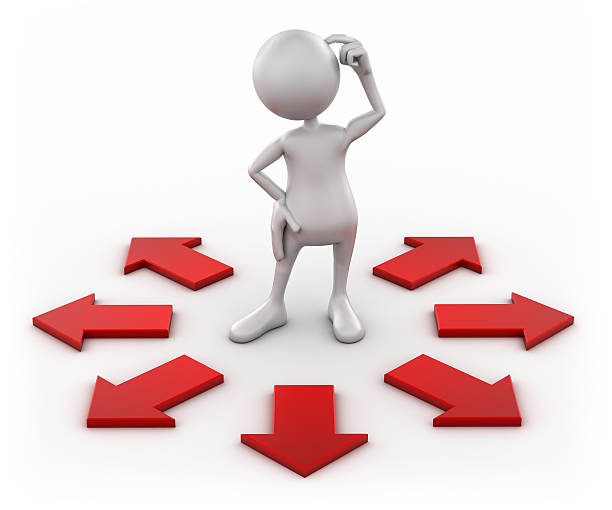 Since the end of the 2019 regular season, the Reds front office has been active remaking the 40-man roster. We’ve seen a flurry of moves in the last couple weeks associated with arbitration tender decisions and the run up to the Winter Meetings. Even though the club didn’t finish any deals with free agents or trades with other teams during the meetings in San Diego, we know from previous years that the time between the end of those meetings and the holidays has been chock-full of important transactions.

To make sense out where the Reds are going, we first need to see where they are.

These are players who have been acquired by the Reds and added to the 40-man roster:

Smith, Jankowski, De Leon, Martini, Shafer and Payton are organizational-depth pieces. Payton (our Meet Him post) has to make and stay on the 26-man roster or he goes back to Oakland. If he sticks in a Reds uniform, it will be as LH pinch hitter with pop. De Leon is a legit swingman who, with help from the Reds pitching gurus, could make a run at the starting rotation. If Smith, Jankowski, Martini or Shafer make the Opening Day roster, it will be due to a run of injuries or an awful offseason by the front office.

Moustakas, of course, is the big acquisition. He signed the 6th largest free agent contract in baseball so far this offseason. He slots in as the Reds starting 2B, but can play across the IF, even SS in a pinch. In light of the Moustakas signing, Nick Senzel seems destined to remain in CF.

These are players who were on the 40-man roster at the end of the season and no longer are:

Peraza signed for close to $3 million with the Red Sox. The Giants inked Gausman for $9 million. Both of those numbers are below their projected arbitration awards had they stayed with the Reds. Iglesias and Wood, both free agents, have not signed yet. Derek Dietrich had enough seniority to opt for free agency, which he did instead of reporting to Louisville.

The 40-man roster stands at 39 players. With Moustakas having a bit of his salary backloaded, according to our updated analysis of the payroll, the Reds have in the range of $25-30 million left to spend on new acquisitions. That’s a conservative estimate of the budget that ownership has approved.

Next, let’s analyze what more we can and should expect the Reds front office to do before the start of the season.

The Reds have telegraphed, either through interviews or pattern of behavior, these upcoming acquisitions:

Another Big Bat: Corner OF

You might find it presumptuous to include corner outfield in the “obvious” category. It’s not. Yes, the Reds have Jesse Winker, Aristides Aquino and Philip Ervin returning. But let’s not fall prey to the psychological bias of over-valuing what we already have. The Steamer-Fangraphs 2020 WAR projections provide the needed reality check: Winker (1.3), Aquino (0.5) and Ervin (-0.1). And yes, Steamer knows about those cool plans to platoon.

That’s a big ol’ splash of icy Ohio River water on the face, right? The front office needs to borrow a page from last offseason and move beyond satisfaction with homegrown mediocrity; this time with position players instead of pitching.

A huge upgrade was there to be had at catcher with free agent and former Reds #1 draft pick Yasmani Grandal. But Grandal chose the White Sox. What about shortstop? Other than Didi Gregorius, who signed cheap with the Phillies, there aren’t other compelling free agents. But more on SS in a minute.

Among the best position players left on the free agent market are corner outfielders Marcell Ozuna and Nick Castellanos. We’ve written “Should Reds Target” posts about Ozuna and Castellanos. Ozuna has more upside, Castellanos is younger and unlike Ozuna doesn’t come attached to a rejected qualifying offer that would cost the Reds a draft pick. A reunion with Yasiel Puig could fit in that category. The next tier is Kole Calhoun, Shogo Akiyama (Japan), Corey Dickerson and Avisail Garcia. The Reds have been linked to Ozuna, Akiyama and Calhoun. It’s hard to imagine the Reds not adding one of these OF bats. The bigger, the better.

The Reds starting rotation returns intact from last season. That said, it was widely reported the Reds aggressively pursued free agent starter Zack Wheeler. Bringing on Wheeler would have allowed the Reds to deal one of their current starters for a position player. But Wheeler chose the Phillies and their $118 million/5-year offer. Turns out Wheeler’s wife living near her home was a factor. The Reds had been linked to Madison Bumgarner (no, please), but the former Giants pitcher signed a $85 million/5-year contract last night with the Arizona Diamondbacks.

Recent reports/rumors suggest the Reds have cooled on the remaining top end of the starting pitcher market. Wheeler was a one-off in the eyes of the front office. If that’s the case, it would make sense for the Reds to wait on the mid-range SP free agent market. They can swoop in and sign one or two for more depth and a bit of spring training competition. Last season the Reds went the trade route for SP (Sonny Gray, Tanner Roark, Alex Wood, Trevor Bauer). But this year, with greater needs elsewhere, it makes sense to shop in the free agent store. Decent-risk starters have been available for less than $5 million the past few years.

The Reds have enough talent and depth to conclude they could get by without the annual spin of the reliever roulette wheel. We’re talking about this year’s model of Zack Duke, Jared Hughes, David Hernandez, Kevin Quackenbush, Blake Wood, Drew Storen, Steve Delabar, Burke Badenhop and Kevin Gregg. Sigh. On the other hand, attrition is a real thing. Adding depth here is likely, out of habit if nothing else.

Those are the three predictable areas for free agent acquisitions. Count on the Reds doing more in each one.

If the Reds front office gets those free agents, in addition to the moves they’ve already taken, it would represent a significant improvement over their 2019 roster. Adding Moustakas and Ozuna (for example) would be a huge upgrade in run scoring. Nick Senzel and Jesse Winker should be healthy to start the season and that would boost the offense as well.

We still haven’t addressed the possibility of a trade. Hints or innuendo about a deal have been scarce. Unlike the free agent market, a successful agreement means finding an intersection of interests between two teams. It’s not imperative the Reds go further and make an additional impact trade.

But I have the sense they are looking. It would be a big, surprising one. Last year, they pulled off a stunning, blockbuster trade with the Dodgers. The Williams-Krall-Bell regime seems to have a taste for trading. What might one look like?

To be sure, the flexibility to trade from their major league strength — starting pitching — took a hit when they didn’t land Wheeler. But the Reds still have sufficient resources to draw on in three categories: (1) major league relief pitchers, (2) top minor league prospects and (3) young corner outfielders.

The Reds also have several major league players who could be a position-for-position swap as part of the return. If they trade for a catcher such as Willson Contreras, they could part with Tucker Barnhart. If they trade for a major league shortstop, Freddy Galvis becomes expendable. The return for a frontline starting pitcher might include Tyler Mahle. A deal for a new corner OF might see Aristides Aquino or even Jesse Winker shipped off.

Finally, and perhaps most important, they can take on salary. That’s relevant, even crucial, when the trade partner is looking to unload payroll, as many are.

As one example, let’s look at the trade market for a top-end shortstop. Freddy Galvis is projected for 0.2 WAR in 2020 by Steamer-FanGraphs. The Reds should be talking with these teams about their SS: Houston (Carlos Correa), Boston (Xander Bogaerts), Colorado (Trevor Story), Cleveland (Francisco Lindor) and the LA Dodgers (Corey Seager).

Each of those shortstops has at least two years of team control remaining. Correa, Lindor, Story and Seager are heading into their second year of arbitration. Bogaerts signed a long-term deal with the Red Sox. All five teams have talked about wanting to cut payroll. The Reds could take on their salaries, plus another player the club is trying to unload. What would the Reds give up? It would depend on which of those players we were talking about. But they could offer Raisel Iglesais or Amir Garrett; they could include Freddy Galvis; they could add a good prospect; and then there’s the money.

Last offseason was hashtag Get The Pitching. Frustrated waiting for in-house starters to develop, even the Reds ownership and front office endorsed the campaign. What took place was a tidal wave of change in the right direction. The front office ushered in a new coaching staff armed with data and advanced technology. They made not one, or two, but FOUR starting pitching trades. Ownership signed a significant contract extension. The all-out push paid off in talent acquisition and development. The Reds held opponents to 711 runs. That was down from 819 runs in 2018. Get The Pitching resulted in a 15% improvement in run prevention in a season when runs league wide were up by 10%. The Reds went from 21st in xFIP to fourth.

To build on the pitching progress of 2019, the folks working at 100 Joe Nuxhall Way need the same all-out approach this offseason on the hitting side. They’re off to a solid start. They wasted no time replacing the hitting coach they had lured from the Dodgers just a year before. Mike Moustakas is a huge upgrade at 2B. If they can carry out the agenda outlined above — both the obvious and add that one big, surprising trade — the Reds just might accomplish in run scoring what they did in run prevention.

And that, Reds fans, would mean a bunch of wins. 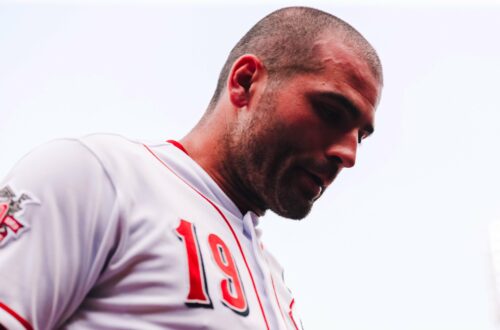 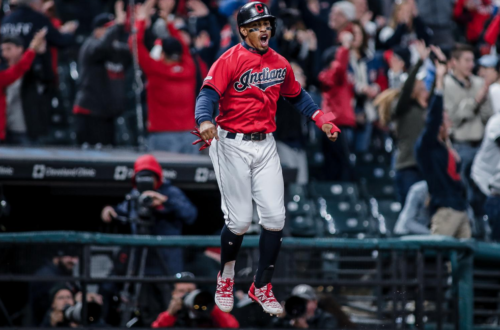 What Francisco Lindor would mean for the Reds 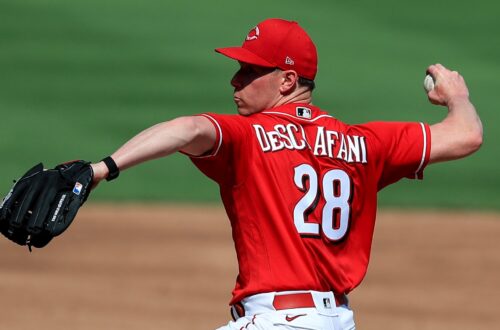