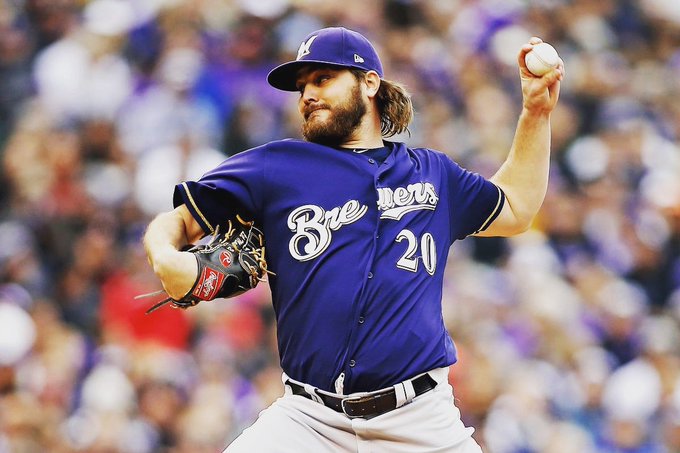 Wade Miley‘s career had tanked in Baltimore in 2016 and 2017. Miley had put together several league-average seasons in Arizona, but then had bounced from the Diamondbacks to the Red Sox to the Mariners and then the Orioles. His was the typical story of a washed up 31-year-old major league pitcher when he signed a minor league deal with the Milwaukee Brewers in 2018.

Miley didn’t make Milwaukee’s club out of spring training. He was called up in May but injured until basically the All-Star break.

That leads to the reasonable question: Is it possible that Johnson and his staff can work their magic on Miley and coax another superb season from his left arm?

Sure, at least that’s what the Reds and their fans have to hope.

But there are reasons to be skeptical that a reunion with his pitching coach will return Miley to his 2018 career half-year.

For one thing, Miley’s success in 2018 was largely due to his throwing a new pitch — his cutter. Miley had never thrown a cutter until he experimented with it in 2017. Johnson convinced Miley to boost the number of cutters he threw from 14% to 41%. What stands out is that little else changed about Miley’s pitching in 2018. There were none of Johnson’s trademark improvements in spin rate or velocity or pitch movement. Problem is, in 2019, major league batters figured out Miley’s cutter. Batting average against it rose from .196 to .278. Slugging against it went up from .312 to .438. Overall, his xwOBA on the cutter went up from .291 to .331. This was in a season when he threw that pitch 47% of the time.

Second, it’s not like Miley left Derek Johnson in Milwaukee and went to a black hole for pitching development in 2019. In fact, the Houston Astros are known for making pitchers better. They’re the gold standard for getting pitchers to reach their potential. Ask Justin Verlander. Ask Gerrit Cole. Ask Charlie Morton. So expecting the Reds pitching staff, as smart and talented as they are, to make large improvements in instruction over what the Astros did with Miley is wishful thinking.

Finally, Miley’s terrific 2018 was only really 15 starts and 80 innings. He didn’t sustain it for an entire season. That’s a small enough sample size to be distorted by variables Miley didn’t control. For example, his luck on average for batted balls in play (.269) was by far an outlier in his career (.306). Miley also benefitted from a HR/FB rate of 5.2% and an 0.33% HR/9. Research shows that pitchers have little control over the number of home runs they give up independent of how many fly balls they allow. That’s why the best way to predict how many home runs a pitcher gives up is knowing his FB%. While that number has crept up the past few years across the league due to changes in the baseball, a pitcher’s HR/FB number moves toward the league number over time.

Miley’s career HR/FB is 12.5% which is about what the league average was over that time. To no one’s surprise, Miley’s BABIP and HR/FB moved back to league average last year with the Astros. The 2018 narrative about Miley throwing his cutter to avoid home runs was just that, a nice story. That same cutter gave up a league-average 15.2% HR/FB last year.

When you adjust for those two anomalies, Miley’s BABIP and HR/FB, his 2018 success vanishes into thin air. All you needed to see ins 2018 was his xFIP, which was 4.30 — worse than the league average of 4.15.

Yes, thanks to the help of Derek Johnson, Wade Miley stopped the free fall his career experienced in Baltimore. But if you expect the Reds pitching staff to wave their magic analytics wand and make Miley a better-than-average pitcher, there are good reasons to believe you’ll be disappointed.