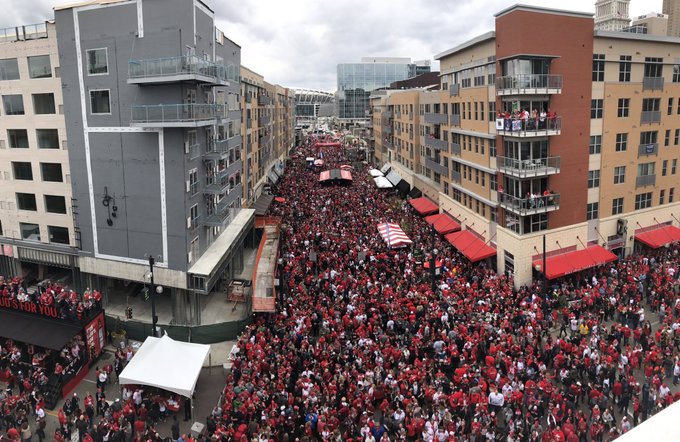 Take me out to the ball game, take me out with the crowd.

The crowd. That glorious Opening Day crowd. 44,000 people at the game. 100,000 at the parade. 60,000 at the block party near the stadium. All reveling in a de facto holiday for Cincinnati. We capitalize Opening Day, after all.

But this year that crowd poses a mortal danger.

And it must be prevented from gathering for the city and region’s well being.

I’m talking about the threat of the coronavirus, of course. We still have much to learn. But the numbers are startling. Just two weeks ago, we knew of 15 cases in the United States. Today, that number is  () (update: over 1250) representing infected people in (update: 43) states and Washington D.C. (37) American deaths have been attributed to the virus.

Even worse, we’re just at the start. The pace is quickening, with the virus spreading among communities across America. As testing becomes readily available, we’ll soon discover hundreds or thousands more who have been infected.

Health experts are bracing for a sharp increase in reported cases in the United States. A doubling or more every week, for months.

One public health step we’ve seen is the cancellation of large public events. It’s an extreme form of social distancing, the one policy that has proven effective at slowing the coronavirus in other nations.

Major American universities, from Harvard to Grinnell to Stanford, have suspended in-person classes. The California-based Indian Wells tennis tournament, a Masters level event held in March equivalent to the Western & Southern Open in Cincinnati, was cancelled. Saudi Arabia has banned pilgrimages to Mecca. The Japanese professional baseball season has been delayed for at least a couple weeks. The annual Conference on Retroviruses and Opportunistic Infections is now taking place online. The nation of Italy has been shut down.

Just yesterday, the City of Boston announced the difficult decision to cancel the city’s St. Patrick’s Day Parade, a tradition dating back to 1737. Irish are the largest ethnic group in Boston, so the event has enormous civic importance. Crowds of over a million people attend that parade, plus the house parties. Cancelling it was bold, you could say Boston Strong. Even the St. Patrick’s Day parade in Dublin, Ireland has been cancelled.

The reason large gatherings are prime targets in combating the spread of the coronavirus is because public health officials know they are a classic pathway for a virus to spread. Even in outdoor events, you have people touching each other, being close together and coughing on each other. They present enormous risks of importing, dispersing and exporting infectious disease, particularly respiratory infections like the coronavirus. In this case, that’s to and from the broad reaches of Reds Country.

The experience in the city of Philadelphia in 1918 presents a cautionary tale. Just as a deadly flu epidemic was spreading into community populations, the City of Brotherly Love decided to go ahead with a parade to celebrate the conclusion of World War I. It drew 200,000 people.

The results were swift and stark. Philadelphia became the hardest hit city by that flu in America. All beds in the city’s 31 hospitals were filled within 72 hours of the parade. Within six weeks, 12,000 people were dead.

“At first, Philadelphia’s epidemic did not differ from that in other major American cities,” noted historian James Higgins. “Yet by the first week of October, roughly five weeks into the outbreak, Philadelphia’s mortality rate accelerated to a point unmatched by any city in the U.S. or perhaps by any major city in the world.”

The spike in Philadelphia’s death rate was attributed to an ill-timed parade. Other cities that cancelled similar parades experienced infection and death rates half those suffered in Philadelphia.

What To Do With Reds Opening Day

In short, play the game with no fans. Cancel the parade and block parties. Close the downtown bars and keep fans off the streets. Reschedule the Opening Day celebration for Monday, August 24, another home game against the St. Louis Cardinals. (Findlay Market shop owners would love it if the parade were once again on a Monday, when the market is otherwise closed.) Make that date a huge celebration.

Parades for Opening Day in Cincinnati date back to 1890. The now-official Findlay Market Reds Opening Day Parade is a century-old tradition. It’s a wonderful regional expression of community pride in being the town that claims the first professional baseball team. The timing to coincide with Opening Day is nice, but not imperative. Moving it for a year to a different date would be no huge loss.

The same goes for the Banks block parties. These are the folks without tickets who jam together for concerts and drinking in the streets next to the stadium. Change the date. No big deal.

Those attending the Opening Day game itself would have no defense against the guy coughing the row or two behind. Or the person ahead in the concession line who turns around to sneeze. Add hundreds of vendors, ushers and concession stand workers who can become unwitting vectors. Great American Ball Park would become an anchored cruise ship without free booze, at ten times the population and no private rooms.

The Balance of Risks

Hand washing, cough etiquette and masks are no match for densely crowded conditions.

To be sure, Cincinnati and surrounding Reds Country can’t avoid the coronavirus, even taking aggressive proactive steps to prevent large groups from assembling. But levels matter. Slowing the spread may provide the crucial difference in ensuring our local hospitals have enough ventilators, intensive care units, medical supplies and healthy nursing and doctor staffs.

An overwhelmed medical system, with shortages of essential medicine and equipment, will be a threat to more than coronavirus patients. Avoidable deaths would occur from everyday causes such as cancer and heart disease. Triage may become necessary. It has in the past. It is reality in Italy today.

Appropriate decision-makers, whether that be Reds ownership, the mayor of Cincinnati, the governor of Ohio, and Major League Baseball, should error on the side of public health. Putting smart and safe ahead of sentimentality would be Cincinnati Strong.

If decision-makers go ahead with current plans, they’ll be responsible for additional illness and deaths, perhaps, if history is an indication, on a large scale. They’ll make it less safe for us, our family and friends, the region’s shopping malls, schools, churches, movie theaters and restaurants.

We could leave it up to individuals to make their own decisions. The young and healthy might feel they can survive the coronavirus (the odds would be in their favor). But they would still be deadly carriers. With limited or mild symptoms, low-risk individuals might not even realize they’re infected. They could spread the virus to friends, family, even strangers, in older, high-risk groups. The young might feel the sting of an overwhelmed hospital system.

There will be real costs to strong steps. But those side effects on businesses and others can be mitigated. So far, extreme social distancing has been the only effective public health measure against the exponential spread of the coronavirus.

I’m a die-hard Reds fan. I’ve owned season tickets for years, watch nearly every game and devoted more than ten years to this hobby of writing about the team. I’ve been fortunate to attend my share of Opening Days and it’s a unique treat, including singing “Take Me Out to the Ball Game” during the 7th-inning stretch. It doesn’t come easy to advocate significant disruptions in the way fans enjoy it.

Yet, for the good of our families, neighbors and broader community the powers that be must shut it down. For now, to crowds, all of it. To keep our city and region safe, we can do without the in-person experience once.

Then we’ll get through both the virus and the loss. We’ll go back to our crowds and traditions. But the next few months need to be about Purell and Clorox Wipes more than peanuts and Cracker Jack.

We have tickets. I’m not sure how I feel about it. I want to go, but I definitely don’t want everyone hacking and snotting on me. It’s a conundrum.

That’s right. I’d feel the same way if I had tickets. That’s why the city/Reds need to take this decision away from us as individuals. Even if someone decides to stay at home to protect themselves and family, if the games take place those newly infected people will spread out in schools, churches, malls, restaurants etc. and still pose risks to everyone. Even the people who decide to stay home.

The next sad question, then, would be, how long into the season would games need to be played without spectators? A vaccine is months away, and without the ability to know who might be spreading the virus even if they don’t show the symptoms? Shudder.

They heard you. Opening Day Parade is now postponed.

It’s going to be more than the parade. The odds are huge that at least one player will test positive before Opening Day and that will force the league’s hand because of the related quarantines. My best guess: MLB announces a 1-month delay to the start of the season. But that will end up being at least 3 months. Maybe they’ll decide to just play the second half of the season.

I think the start of the season will be delayed. The question then becomes how long.

NBA was swift and decisive. NHL is next. Time to suspend the season MLB.