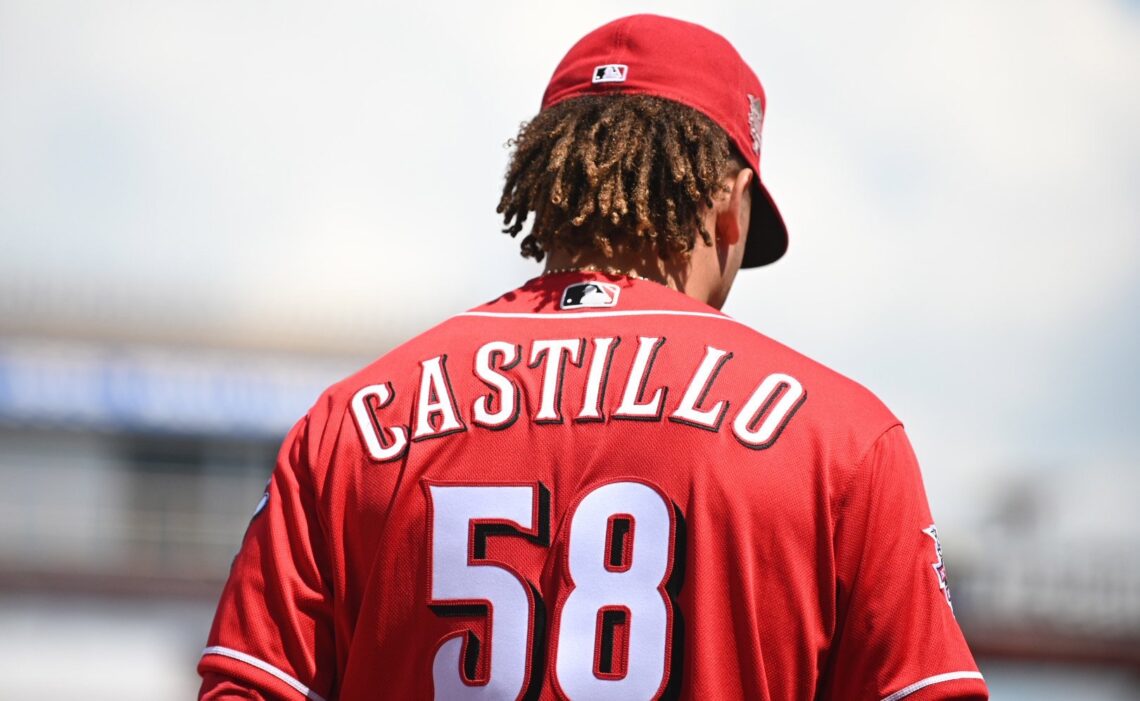 Before his first start of the year, I wrote about Luis Castillo and his ongoing mission to develop his slider. We all know about his nearly unhittable changeup. Fine-tuning his slider would give him two deadly putaway pitches to unleash. In a dazzling 2020 debut, he didn’t throw it slider much — 11 of his 91 pitches were sliders — but he did use it effectively. Let’s revisit some of the highlights in preparation for his second start of the season tonight.

Castillo threw six of his 11 sliders for strikes in his first start of the season. All but two were against right-handed hitters, which aligns with his career tendencies.

The first came against Miguel Cabrera in the bottom of the first inning. Castillo made the future Hall of Famer look silly, fooling him with a slider low and away.

This is a great example of why the slider can be effective for Castillo. As I mentioned in the in-depth breakdown linked above, his slider moves completely differently than his other three pitches. Castillo’s fastballs and changeup all tail toward righties, but the slider just drops. Cabrera seemed to be expecting the ball to dart back over the plate, and the result was an ugly swing.

The next slider I want to showcase was the second of three swings and misses Castillo generated with the pitch. This one was for strike three against Austin Romine.

Again, we see a batter who seems to expect the ball to tail back over the plate. Romine opens up his hips to pull the ball, which he probably believed would be a changeup, which Castillo threw 54.6% of the time with two strikes in 2019. Instead, Romine misses badly as the slider drops away from him.

Next up is a first-pitch slider from Castillo, again to Cabrera.

According to Statcast, Castillo likes to use his slider early in the count to right-handed batters. He threw the breaking pitch in 0-0 counts 36% of the time to righties in 2019. It was fairly effective, as he threw it for a strike 50.4% of the time and generated a 60.0% whiff rate. Still, Castillo throws a fastball on about 57% of first pitches. Cabrera seemed to be expecting a heater here and swung early, giving Castillo another swing and miss.

The last slider I want to highlight may have been Castillo’s best of the day to retire C.J. Cron in the fifth inning.

Castillo threw a slider to Cron on the first pitch and hung it badly. Cron clearly wasn’t expecting it, however, and let the pitch go by for a strike. On 0-1, Castillo followed up with another slider. He rarely throws back-to-back sliders, which means Cron probably eliminated the pitch in his head before it was even thrown. Castillo threw 3,158 pitches in 2019 and only featured back-to-back sliders 127 times. Cron is clearly fooled and expects the ball to tail back over the plate. He opens up his hips far too early and gives a half swing that results in a weak groundout to shortstop.

Despite the strong returns for his slider in start one, Castillo still showed some areas to work on. Here’s the full pitch chart: 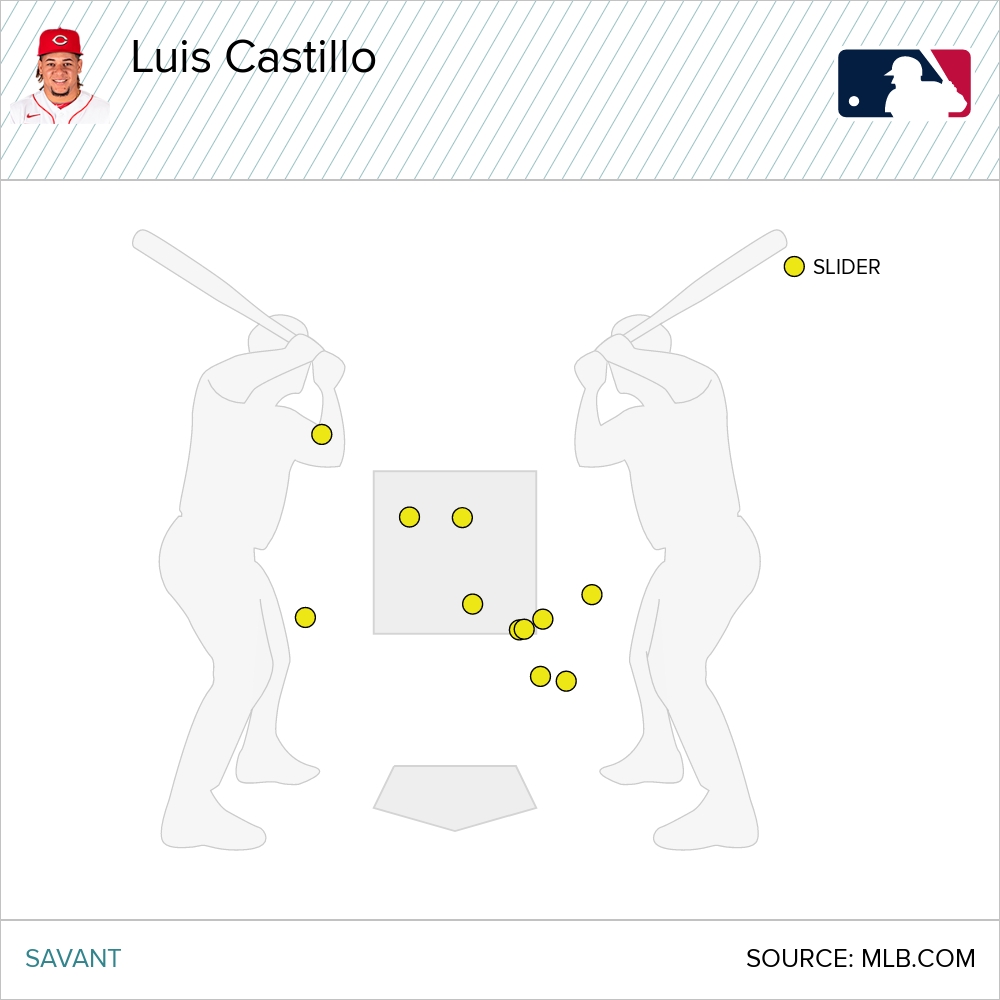 For the most part, Castillo kept the ball low and away from righties — right where he wants the pitch. But he certainly hung a few sliders and was lucky they weren’t swung at. As I mentioned in my piece last week, he got in trouble with hanging the slider late last season, resulting in five home runs against it during July, August, and September.

The two sliders to lefties are the ones that look like they’re about to hit the right-handed batter. This is still a work in progress for Castillo. He doesn’t have much horizontal movement on the slider, which makes it tough for him to throw backdoor breaking balls to lefties. However, he has also struggled at times to throw the pitch down and in against them. Compare his pitch heatmap against righties and lefties last season: 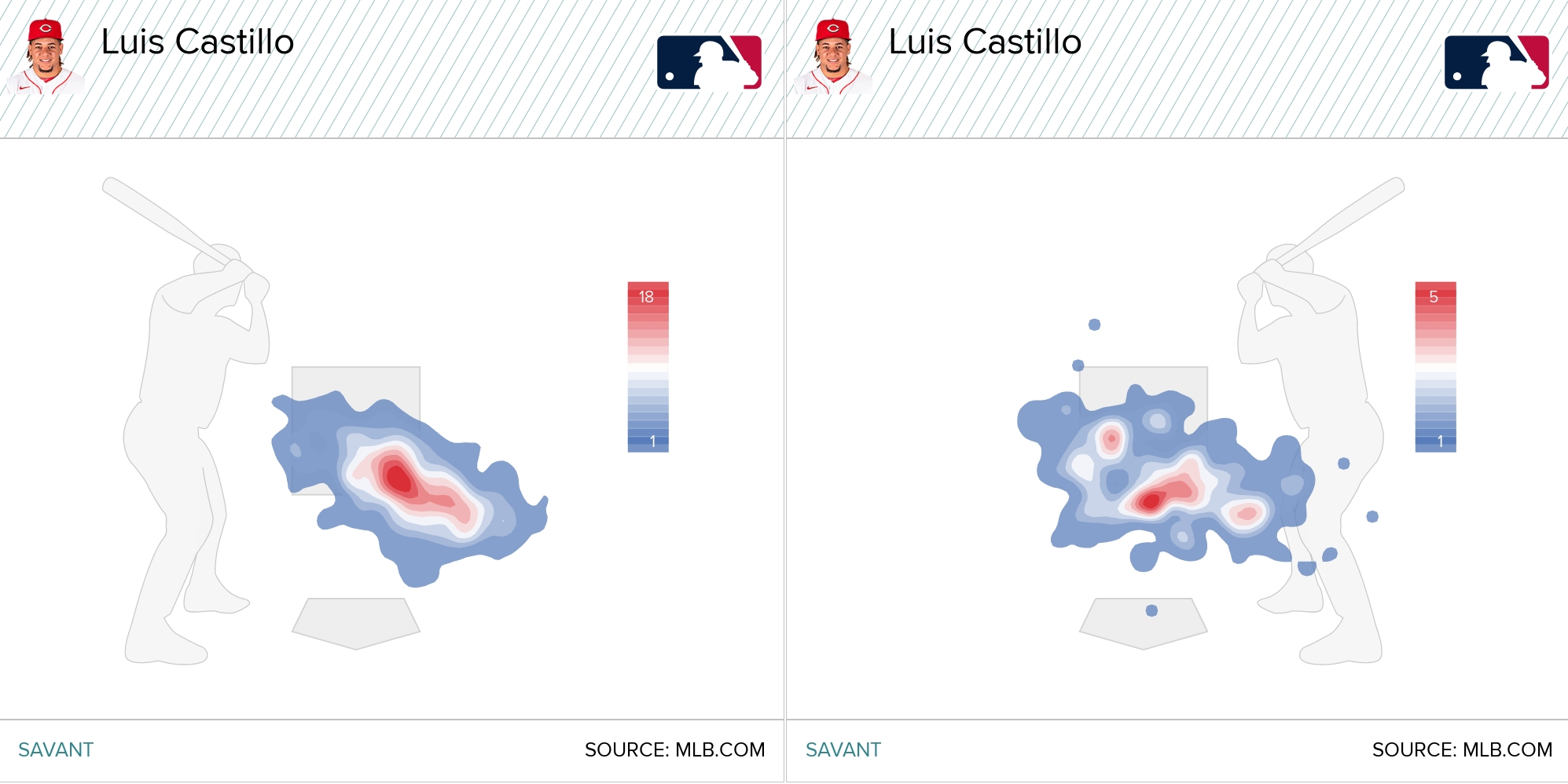 Castillo’s slider is never going to replace his changeup as his most effective out pitch, but he demonstrated how it can be a weapon — as well as how he can improve it — in his first start of 2020. Keep an eye on the pitch in tonight’s start against the Cubs to see how he utilizes it.