The Reds played a 7-inning intra-squad game tonight, with many of the players from the Alternate Training Site at Prasco Park getting ample playing time. Kudos again to the organization for making the effort to produce these games with multiple camera angles and even replay.

From a scouting standpoint, these summer games are useless for predicting anything about the upcoming 60-game season. Not that we won’t try to draw unwarranted conclusions, because that’s what fans do during training camp. Always worth remembering that Scott Schebler hit .342/.490/.579 last spring, won the CF job, then hit .135/.273/.243 in March and April. But it’s great to see and start to get to know the new acquisitions and top prospects.

Nick Lodolo, the Reds top draft pick in 2019, pitched two innings. He’s 6’6″ but not exactly lanky. The 22-year-old lefty looked solid through the core and thighs, desirable physical development for a pitcher. Lodolo held his own against left-handed batters. Tucker Barnhart, who has given up switch hitting and pulled a line drive double down the first base line while standing in the left-handers batting box was an exception. Lodolo’s slider wasn’t as effective against right-handed batters. It looked like they were able to differentiate it from his fastball and it stayed in their swing plane (the old timey name for that is “wheelhouse”). Christian Colon shot a Lodolo slider down the left field line for a 2-run homer. 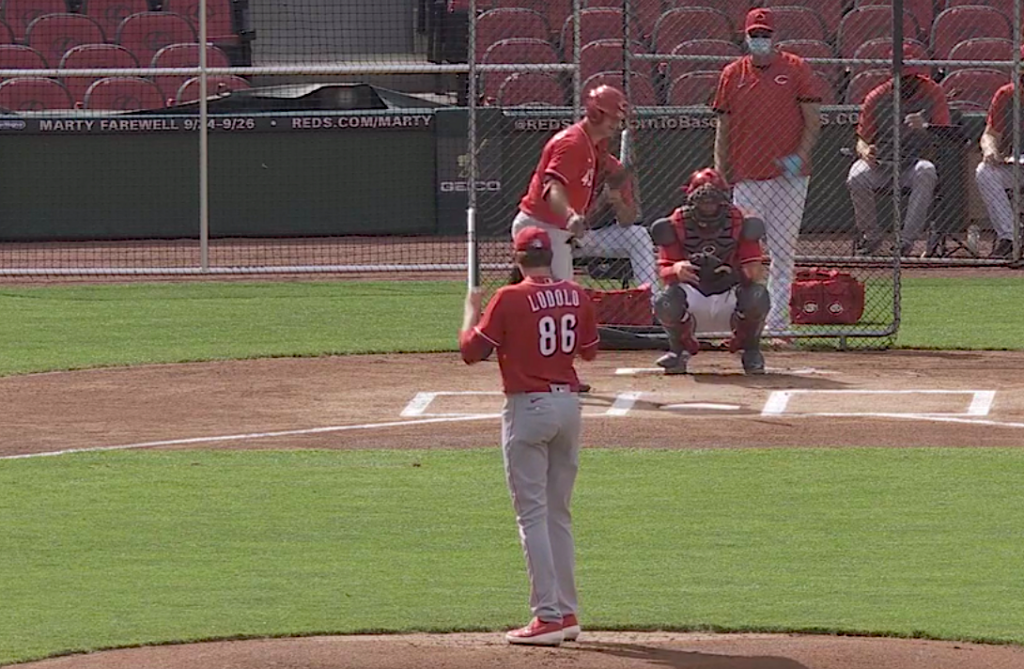 José De Leon, who the Reds acquired from the Tampa Bay Rays for a player to be named later and cash, pitched three innings. De Leon was a promising starting pitcher in the Dodgers organization, a hair’s breadth away from their major league rotation in 2016. The Dodgers traded De Leon to the Rays where he had Tommy John surgery in the spring of 2018. De Leon looked great tonight. He retired 9 of the 10 batters he faced, walking none and striking out a couple. To be clear, he wasn’t facing Baez, Bryant, Rizzo and Schwarber (from Middletown). But he was in the bottom of the strike zone all night. Keep on eye on him. 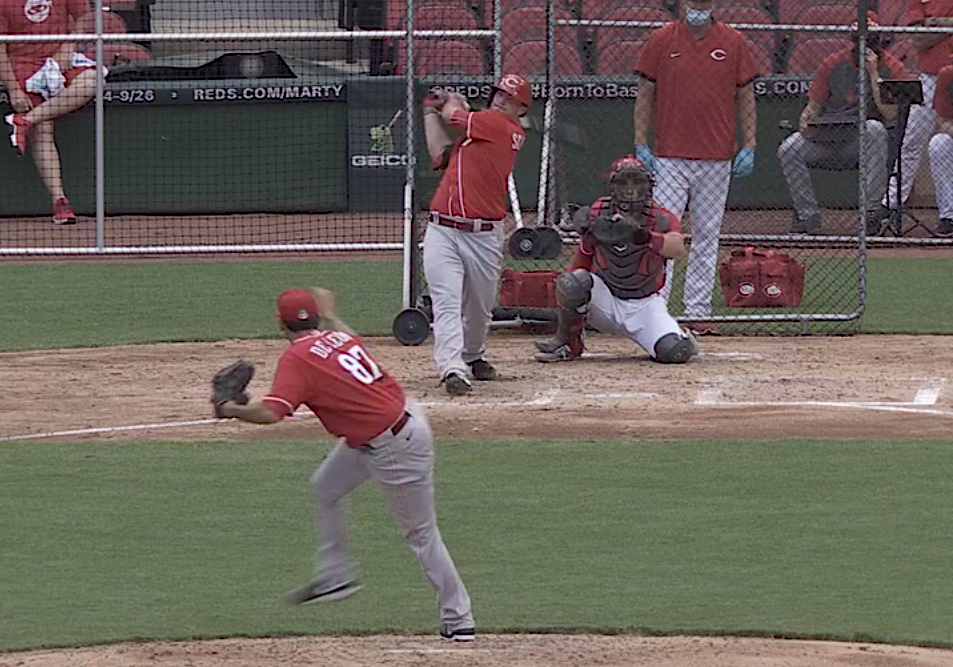 Luis Castillo started for the Prasco Reds and went less than two innings although through a bunch of pitches. The GABP loaded the bases against Castillo both innings. He struggled with his control, walking three batters and had an HBP. After Joey Votto smashed a 2-run bases-loaded single in the second, manager David Bell ended the inning. Castillo had thrown his pitch limit and no one was warming up because pitchers were assigned specific innings.

Amir Garrett struggled in his inning, walking four of the five batters he faced, the other being a single from Shogo Akiyama. Bell pulled the plug on that inning, too.

We got our first glimpse of reliever Pedro Strop in a cocked Reds cap. The Reds signed Strop to a free agent deal. A rusty Strop got two of the first three batters out, but then gave up a single to Jesse Winker, a walk to Boog Powell loading the bases, then walked in a run before surrendering a bases-clearing double in the left-center gap to Kyle Farmer on a grooved fastball. David Bell had seen enough.

Christian Colon had the 2-run homer off Lodolo. 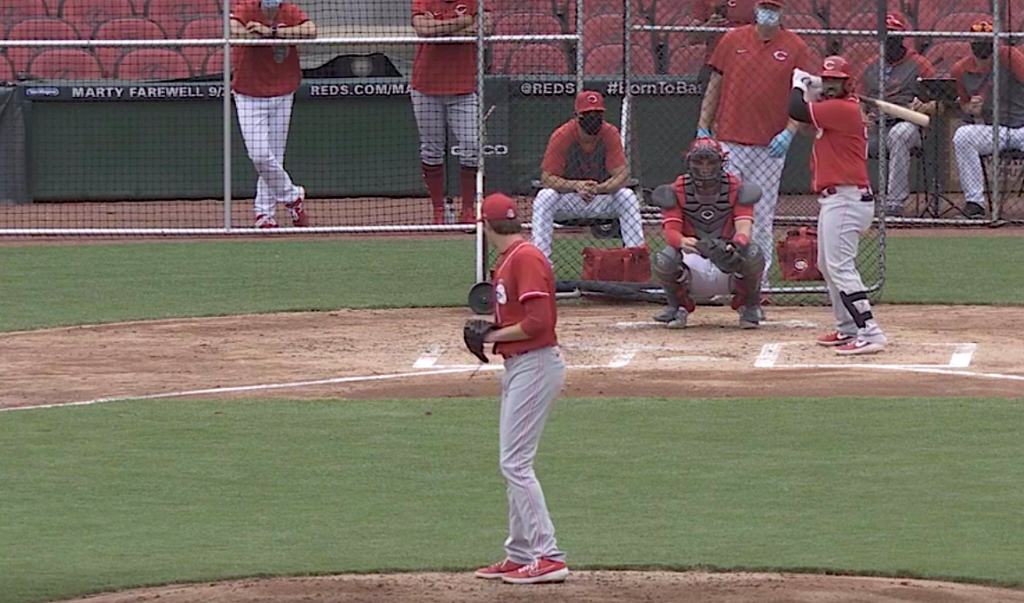 Kyle Farmer, who played third base, had two walks and a double. Joey Votto had three walks and a 2-run single (video below). Shogo Akiyama had a hard-hit single, another hard-hit ball that was played for an out, a ground ball to shortstop that he beat out for a hit and a strikeout. Jesse Winker had two singles, on one of which he turned on a letters-high inside fastball, an HBP and strikeout. Already mentioned Barnhart’s double. Travis Jankowski had a single and walk in his three at bats, with a couple stolen bases. He’s a useful depth piece in the organization who wouldn’t be out of place if called up to play centerfield in the majors. Alex Blandino, who played shortstop, walked twice.

Speaking of Scott Schebler, he flew out, struck out and grounded out before walking in his final at bat. He’s out of options. It’s hard to see him making the Reds 30-man active roster, which means his time in the organization may soon be coming to an end. Schebler and Jose Peraza were the key parts of the Todd Frazier trade. Worth noting Schebler did hit 30 homers for the 2017 Reds.

José Garcia flew out twice (once deep) and struck out twice. But I want to talk about his defense. He flashed elite range and arm on a play deep in the shortstop hole, so you can see the potential. But Akiyama picked Garcia’s pocket in the first inning, beating out a routine ground ball. Akiyama hustled all the way, is fast and shoots out of the left-handed batters box. But Garcia took an extra crow step and got beat. In the 7th inning, Garcia showboated on a routine double play, flipping the ball way over Christian Colon’s head at second. They got the out, but it should have been an easy two.

Great recap, hopefully these continue once the real games start! I am encouraged by Shogo. I know these scrimmages mean nothing. But it seems like he just has a knack for getting on base.

Thanks. We’ll have in-depth coverage of the real regular season games. Of course, we’ll have more actual stats from the game and larger samples to draw from.

Agreed that it will be interesting to watch Akiyama. From a few early samples, he does seem to have good contact skills and is sneaky quick down the baseline. He’ll have to be able to draw walks to keep his on-base percentage valuable. I don’t think he’ll hit for much power. Maybe gap-to-gap.

I think our last hitter who played in an Asian league was Shin-Soo Choo. If Akiyama hits as well as Choo did in 2013 I will be very happy.

When is it time to question Amir Garrett?
He’s become a lefty specialist with a slider.
What happened to the power lefty who struck out 12 as a starter against the Orioles?

He literally couldn’t get anyone out and Bell just stopped the inning.

Regarding Schebler, I had kinda forgotten about him until a few of the RC+ writers mentioned him recently. He and Adam Duvall were two players I found myself rooting for especially because they were seen as at best a good fourth outfielder on a decent team, but not everyday guys. Maybe because of Schebler’s injury luck, we’ll never know if he could have outplayed that perception.

I was really impressed by akiyama’s speed. That was a pretty well-hit one or two hopper directly to the shortstop.

I think Schebler would be a good fit for the Pirates to take as chance on. Maybe they’d trade Quinn Priester for him.