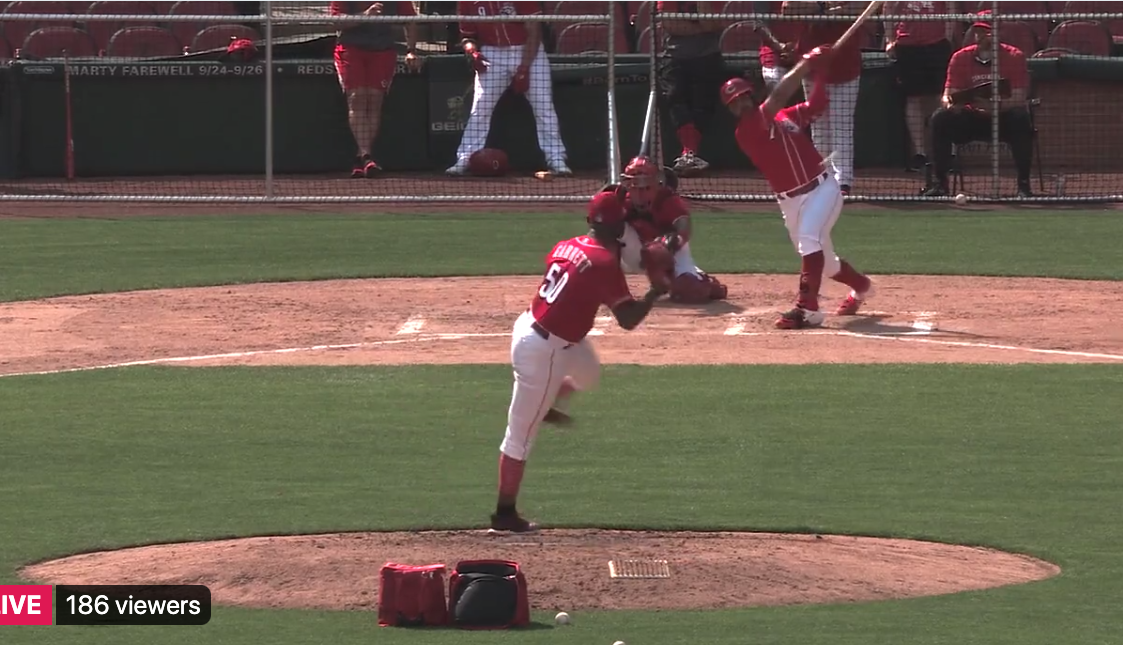 Not this Friday. Or the next Friday. But the Friday after that.

The Reds practiced at Great American Ball Park for about 2 hours and 15 minutes today. At least that’s how long the streaming video lasts that the Reds provided. Practice followed a similar structure to yesterday’s workout. Position groups work together in the first segment, which lasted about 25 minutes today.

The outfielders (Nick Senzel, Shogo Akiyama, Nick Castellanos, Jesse Winker, Phil Ervin and Mark Payton) worked on leaping at the fence, breaking on balls (reaction) and an agility/stamina drill of catching three balls thrown in different directions, one after another. Nick Senzel is the best natural athlete of the bunch. Akiyama and Ervin are in the next group. Payton is agile. Akiyama’s translator, who looks athletic himself, is out there with the OF group wearing a ball glove. 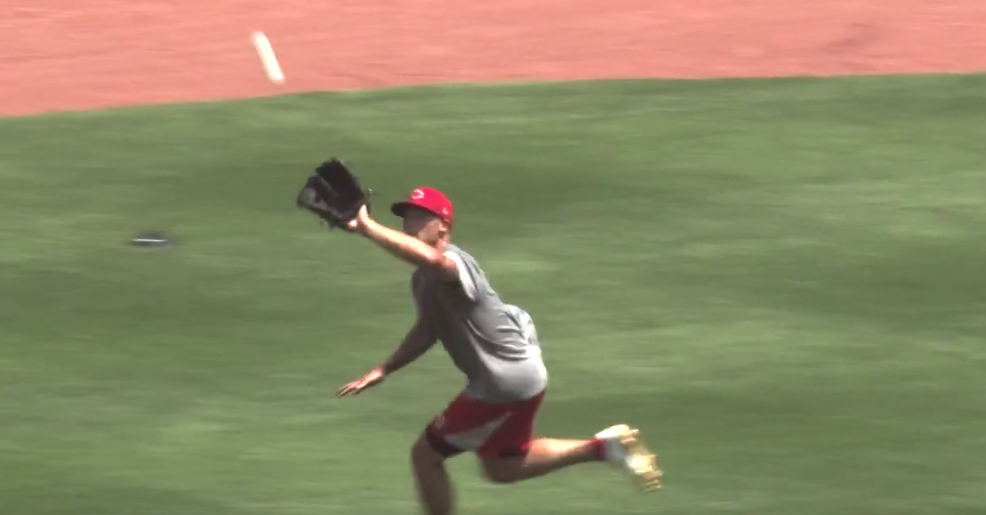 The infielders (Freddy Galvis, Kyle Farmer, Alex Blandino, Mike Moustakas, Joey Votto, Josh VanMeter, Eugenio Suarez and Matt Davidson) practiced taking grounders, turning double plays, making tags and covering bunts. Yesterday, they spent a decent amount of time practicing double plays when shifted to three infielders on either side of second base. Today’s position assignments were clear cut. Galvis and Farmer played SS. Moustakas and Blandino were at 2B. Suarez and VanMeter took 3B and did a drill where they fielded ground balls in rapid succession on their knees. Votto and Davidson covered 1B. 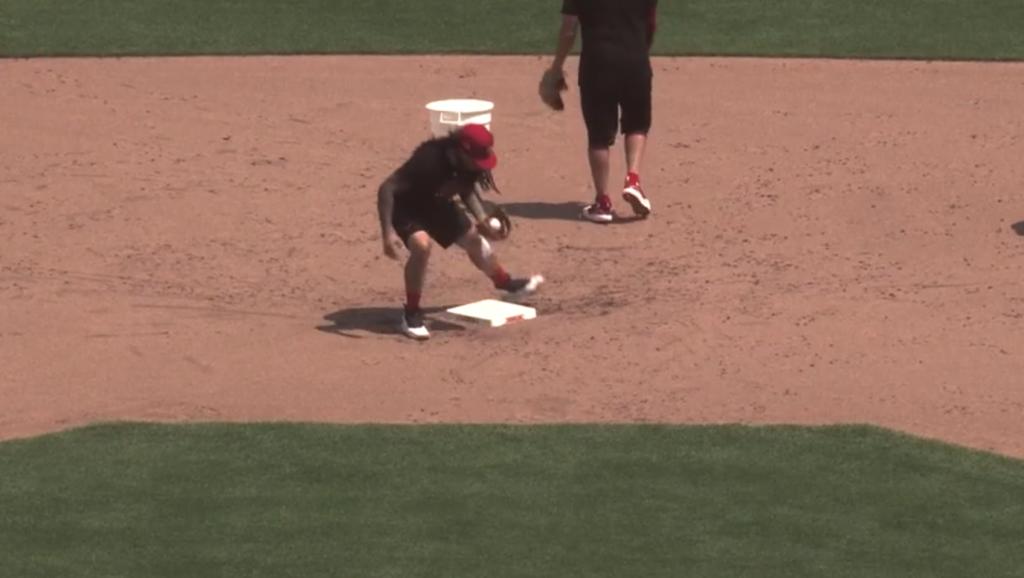 Most of the pitchers participated in Pitcher Fielding Practice (PFP). They fielded bunts and ground balls, practiced covering first and their pickoff moves at 2B. 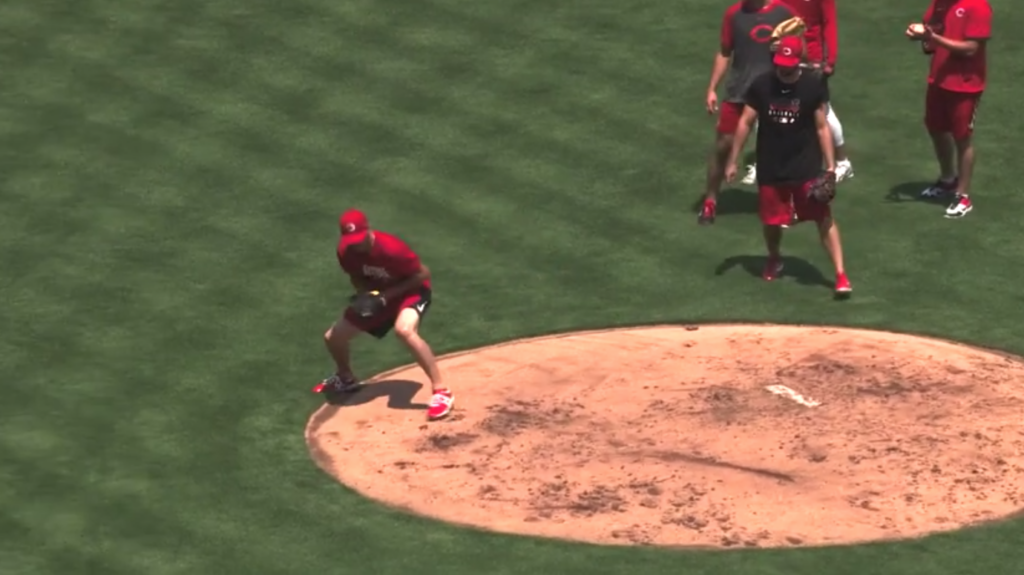 Sonny Gray and Raisel Iglesias had long bullpen sessions. Pitching coaches Derek Johnson and Caleb Cotham were with them. Remember that Johnson was Gray’s coach in college. 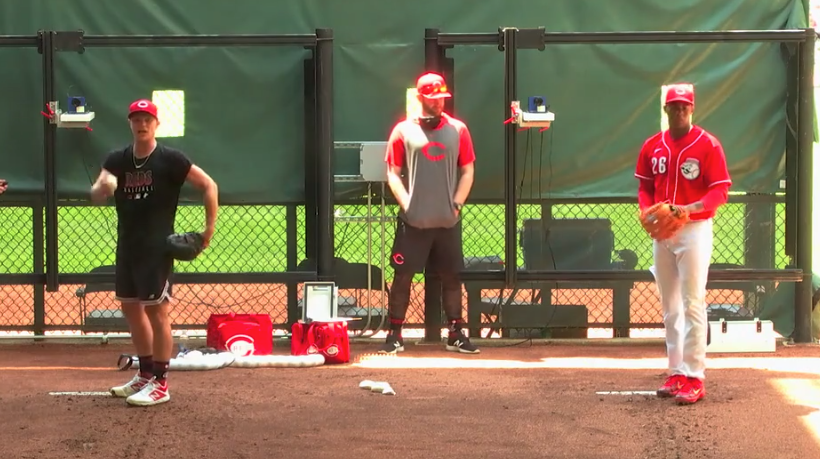 The second, and longest, segment of the workout was standard batting practice. The Reds organization should be commended for its commitment to producing streaming video and then replay of the practice session. It’s not an afterthought. They have several camera operators and a producer cutting from one to another. The past two days, after the batter swings in BP, a second camera shows where the ball went. That’s a neat feature. The only thing better would be if they produced a bit of video from the alternate practice site at Prasco Park. But it’s understandable they don’t.

Joey Votto changed into this shirt for his swings.

Nick Castellanos ended his final BP turn like he was in a Home Run Derby, with four home runs on five swings. The final one was to right-center.

The final segment of practice, which lasted about 45 minutes, was live Major League pitcher-batter competition and the catcher umping. If a batter swings at the first pitch and hits a ball in play, that’s the AB. The pitchers go a certain number of pitches to represent an inning of work. Three strikes and you’re out. That happened a lot today.

It would be surprising if the pitchers weren’t waaaaay ahead of the hitters right now. They had pitched for several weeks when Spring Training was cancelled. As long as they could find someone to throw with (a brother, sister or friend) they could continue doing their Major League thing during quarantine. It didn’t require another Major League player. On the other hand, unless the hitter’s brother or friend happens to be a Major League pitcher they couldn’t simulate the real thing. 3.5 months of quarantine edge goes to the guys who get to perform on a mound.

Today, the pitchers — Wade Miley (1 IP), Tyler Mahle (2 IP) and Amir Garrett (1 IP) — dominated. The streaming ended after that, but I don’t know if that was the end of practice.

Miley looked good for the part of his inning I saw. He got two left-handed hitters, Akiyama and Winker, on strikeouts.

Mahle struck out Moustakas, Winker, Galvis, Winker again, Galvis again, Davidson and Suarez. Shogo Akiyama was the only player to put a ball in play in Mahle’s two innings, and it was a check-swing ground ball. Mahle worked his trademark fastball, throwing it up in the zone for swings-and-misses. He also used his curve and splitter/change effectively for out pitches. Davidson and Suarez both swung and missed at a third strike Mahle breaking ball off the plate. An effective out-pitch would be a welcome step forward in Mahle’s development. Worth noting though that Tyler Mahle is just 25 and had a 23.2% strikeout rate last year, which was above league average (22.3%) for starting pitchers. So he did have an out pitch last year, too. 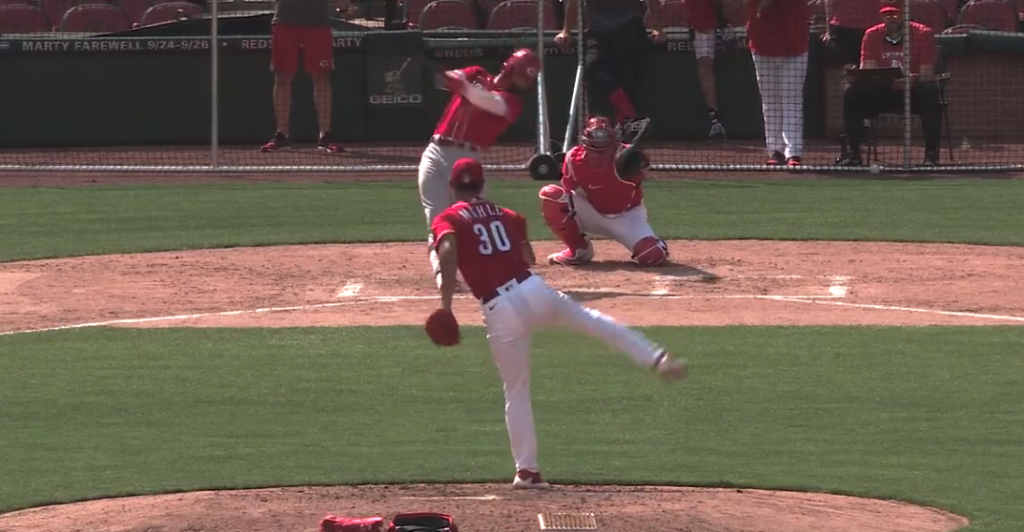 Amir Garrett, who was the only Reds player I saw with a mask on in the live pitcher-batter practice (several players, but nowhere near a majority, wore masks in the first part of practice), looked sharp as well, but not as flawless as Mahle. Garrett struck out left-handed Akiyama on a sweeping slider. He gave up solid opposite field contact to Davidson. He “walked” Suarez on four pitches. Then struck out LH Mike Moustakas looking before facing Suarez again. AG got Saurez twice in the at bat on off-speed pitches and struck the Reds third baseman out on the second of them. 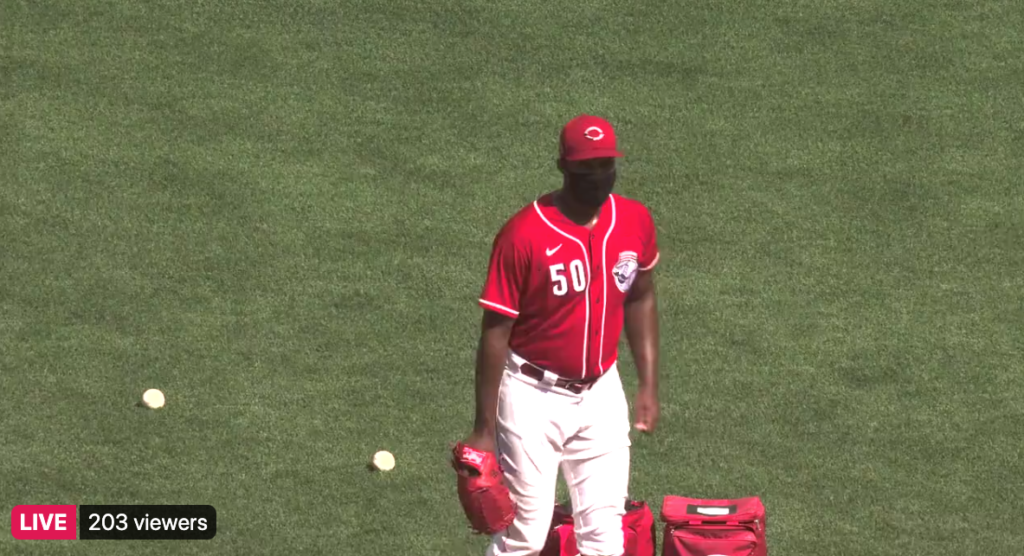 At one point, Cody Reed, Michael Lorenzen and Matt Bowman took a break from running sprints to do socially distant headstands. Bowman was clearly best. Reed was respectable. It looked like the first time Lorenzen had tried it, which means within a week he’ll be the world’s best headstand walker. 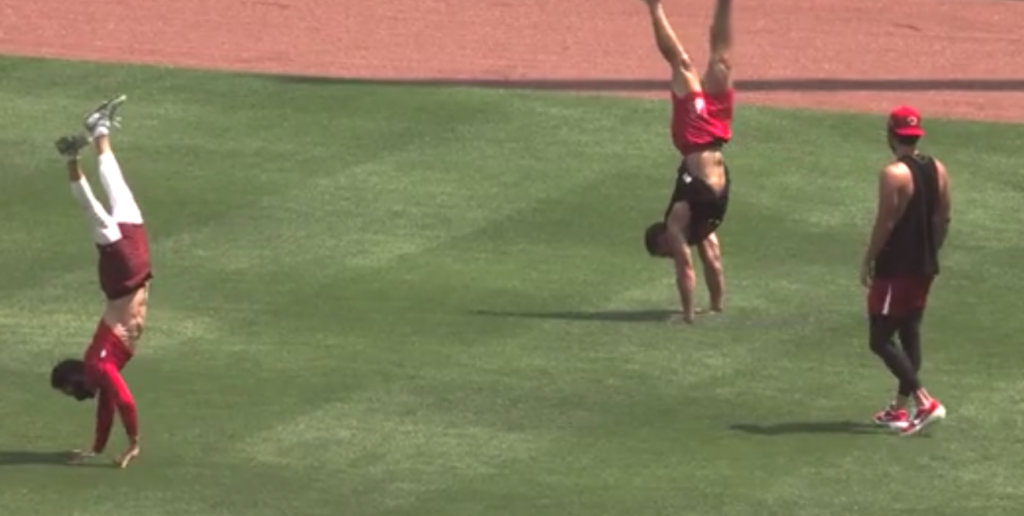 Those are my thoughts from today. You can only tell so much (nothing, really) from one day at the old ball field. Still great to watch the Reds back at it.

Get your weekend off to a great stat: Pitchers limiting contact 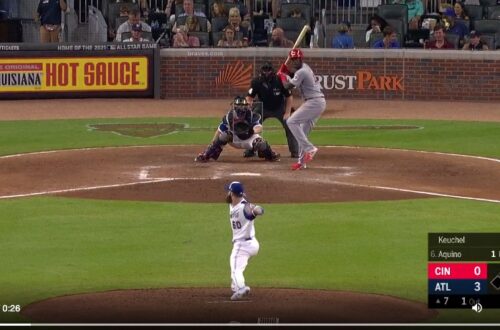