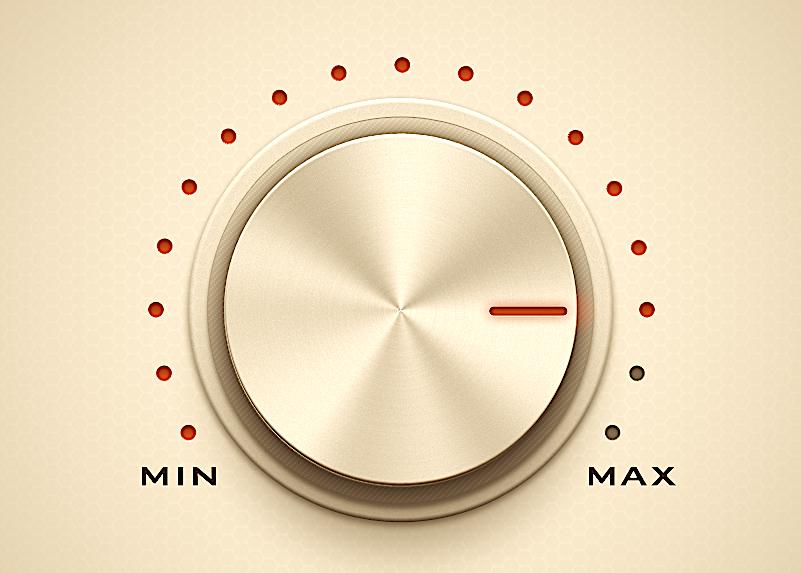 The Reds bullpen has become a fashionable and easy source of fury for a segment of our fans (and play-by-play TV broadcasters).

We in Cincinnati have no monopoly on anger at our local team’s relief corps. Every major league fan base experiences emotions ranging from frustration to outrage toward its bullpen. The phenomenon is understandable. The vast, vast, vast majority of relief pitchers are inconsistent. Complaints ratchet up when a late-inning run is given up, but don’t dial down when things go right. That’s called Negativity Bias. We dwell on the negative and forget the positive.

To be sure, a few of the Reds relievers have been guilty of bad pitching.

But the bullpen isn’t as bad as it seems and shouldn’t be the cause of undue angst about the future.

First, the obvious: We’re only 17 games into the season and these relievers have only pitched 6 innings. The number of appearances is so few, the data tells us nothing about the pitcher or the future, no matter how short the season ahead of us is.

With that gigantic caveat in mind, let’s look at a few statistics to put their early-season struggles in context.

In praise of Strikeouts and Walks

We have so many ways to evaluate pitchers now. The sabermetric revolution, paired with next-gen technology that gives us new measures of each pitch, has unleashed any number of fancy measuring sticks.

But a couple of the simplest pitcher metrics as old as the game itself — Strikeouts and Walks — remain among the most meaningful.

Strikeouts reflect the pitcher’s dominance over the batter. Walks measure the pitcher’s command over the ball. Dominance and command may not present a complete description of the successful pitcher, but the two attributes go a long way.

Another virtue of evaluating pitchers by Strikeouts and Walks is those stats are under a high degree of control by the pitcher. They don’t depend on the wide variance in defensive positioning, defensive skill, official scoring, park size, relievers, opponent lineup construction, random luck, etc.

Even though the sample size is small, Strikeouts and Walks are early predictors of success and failure. A few dozen batters is enough to gain a sense of how good a pitcher has been when it comes to Strikeouts and Walks. They are among the first metrics to stabilize.

Again, with full appreciation of the small numbers in the IP (innings pitched) column, here are how the Reds pitchers have done coming out of the bullpen. 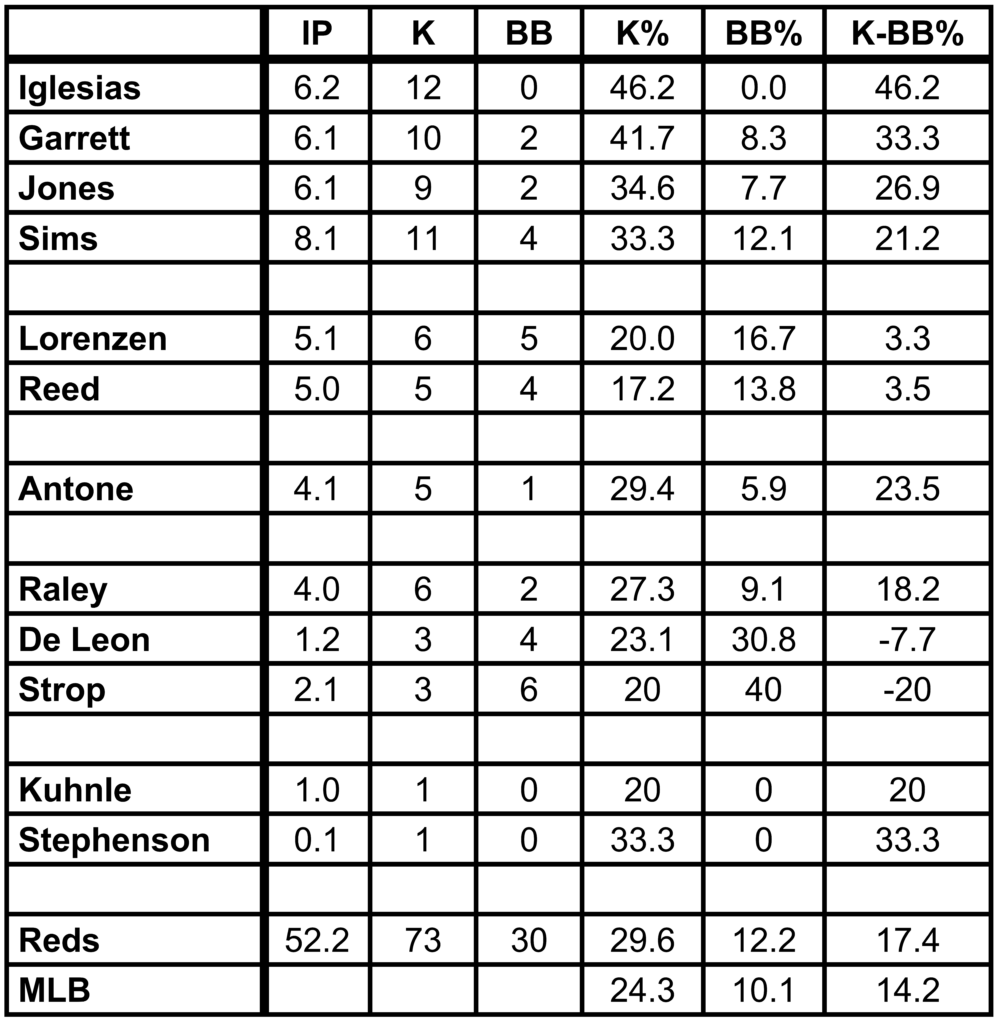 The chart does exclude the one inning by HR-bashing Matt Davidson (1 IP, 1K, 0BB). And with today’s return of Wade Miley, Tyler Mahle is back in the bullpen, but he hasn’t acquired bullpen stats yet.

The Strikeouts and Walks numbers are revealing. Whether you use the counting stats or the rate stats, it’s clear is the Reds have four pitchers who have performed well compared to the MLB average. Iglesias-Garrett-Jones-Sims, in 27.2 innings, have 42 strikeouts and just 8 walks. That’s high dominance and strong command. Raisel Iglesias is one of the top five relievers in the league right now.

Lorenzen and Reed have lowish strikeout numbers and high walk numbers. Low dominance and poor command is a bad combination. Lorenzen pitched well last year [although his xFIP (3.97) was a full point higher than his ERA (2.92)]. He has dominant stuff, but hasn’t executed it. He’s left several pitches in the  middle of the plate and hasn’t been able to throw strikes. It’s unclear if Cody Reed’s inability to repeat a consistent delivery will prevent him from becoming a solid reliever. As of now, he’s the only other lefty beside Garrett in the bullpen, and out of options. For now, he’s here to stay. Of the two pitchers in this category, it’s much easier to see Lorenzen quickly rebounding.

Tejay Antone’s two appearance, one as a reliever and one as a starter, were promising. Barring injuries or double-headers, he won’t be getting a start again soon, so we’ll get to see how he fares over several bullpen appearances. There’s no reason to believe he’ll be less effective in short bursts. He should be a solid regular addition to the pen.

Robert Stephenson was the Reds best reliever in 2019 by several measures. His K%-BB% was 22% last year. If he gets back to full health, Stephenson stands a good chance to be another reliable piece of the solution.

But what about all those home runs the Reds bullpen has given up? We’ll tackle that good question in the next post.

The “Reds bullpen has been bad” narrative is an easy one to grab for on a TV broadcast, in a sports column or on Twitter. As a simple statement about the past, the claim is debatable, but not unfair. But when it gets made over into a prediction and forms the basis of “what can the Reds do to fix the bullpen” anxiety, it’s deeply misleading.

Some of the Reds relief pitchers have been quite good, others not so much. It’s important to look at the right measures.

Based on K and BB, the Reds have a core of four relievers who have pitched well and have the stuff to continue. Tejay Antone and Robert Stephenson can push that number of effective relievers up to six. Expect Michael Lorenzen to be back in form and part of that category again soon. That’s seven. Maybe Tyler Mahle or Wade Miley joins the party as well.

Reds need a second lefty to pair with Garrett.
That would stabilize things short and long term.

I agreed with the bottom line here even before reading the analysis. Mainly Lorenzen played a huge role last year, and that’s led to a painful adjustment in terms of his role. But as Steve and others often point out, relief pitcher performance varies widely from season to season. Early season adjustments have to be made. What’s gone wrong otherwise ? Reed is once again failing to take advantage of an opportunity, Stephenson got hurt, it doesn’t look like Strop is going to help. The Reed/Strop developments are not surprising. Hopefully Stephenson is coming back.

I felt coming into the season that the most important bullpen pieces were Iglesias and Garret. They’re looking as hoped. Trent just wrote an excellent piece on Sims in The Athletic, he has nasty stuff and can play the role that Lorenzen did last year. And Lorenzen is presumably healthy (a problem seems to be stronger muscles he doesn’t know what to do with) and will most likely get back on track.

Fans getting all over Garrett lat night was uncalled for – on the HR pitch he threw his usual slider, it didn’t hang. It’s not news that a RHed hitter will occasionally do that with it.

The above wasn’t “anonymous”, it was Pinson343. WordPress forgot who I was.