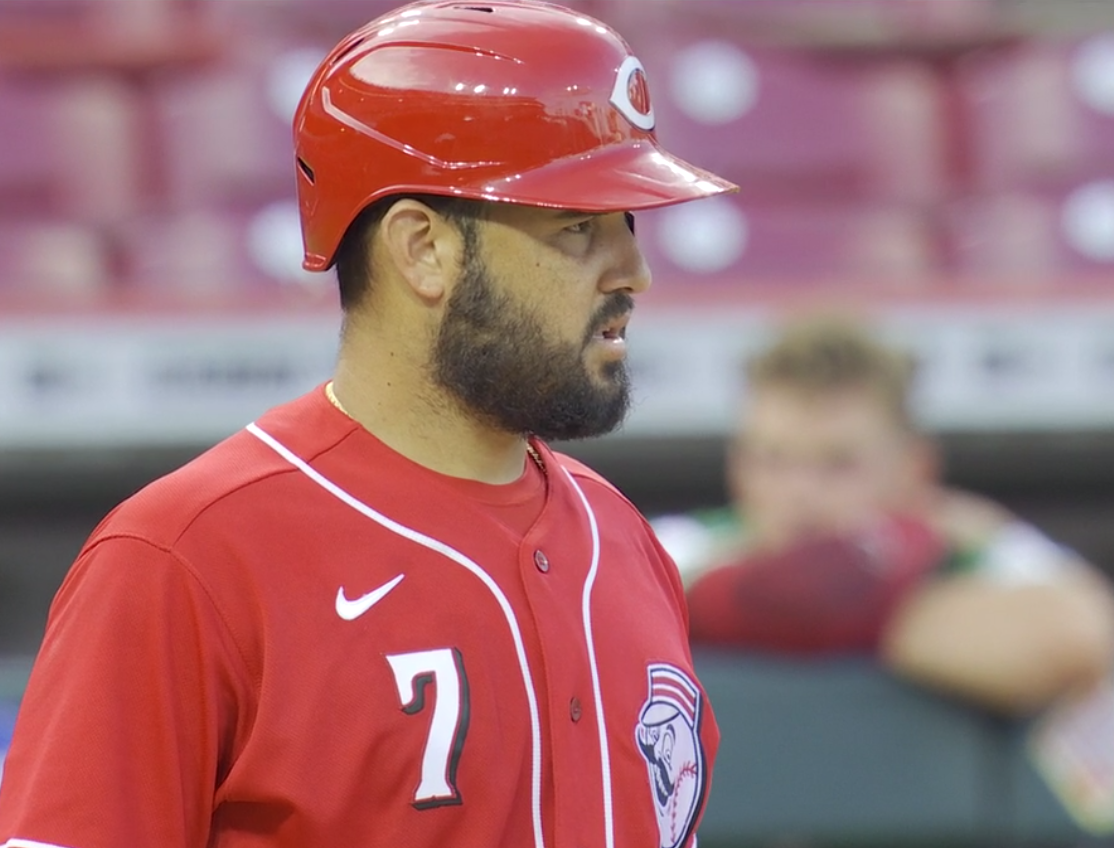 Eugenio Suárez was acquired in a trade with the Detroit Tigers in December 2014, along with pitching prospect Jonathan Crawford, in exchange for Alfredo Simon. At the time, Crawford was seen as the headliner of the deal, and Suárez was viewed as most likely a future utility infielder. He had hit just .242/.316/.336 with an 86 wRC+ in 277 PA with the Tigers prior to the trade, and through his first three seasons with the Reds, slashed .260/.336/.438 with a 105 wRC+. While that was above average, it certainly wasn’t star-level production.

At the beginning of his career, Suárez was a spray hitter, using the entire field. Notice that his HR and hits were spread across the entire field, with more hits toward the center of the field than the pull side. 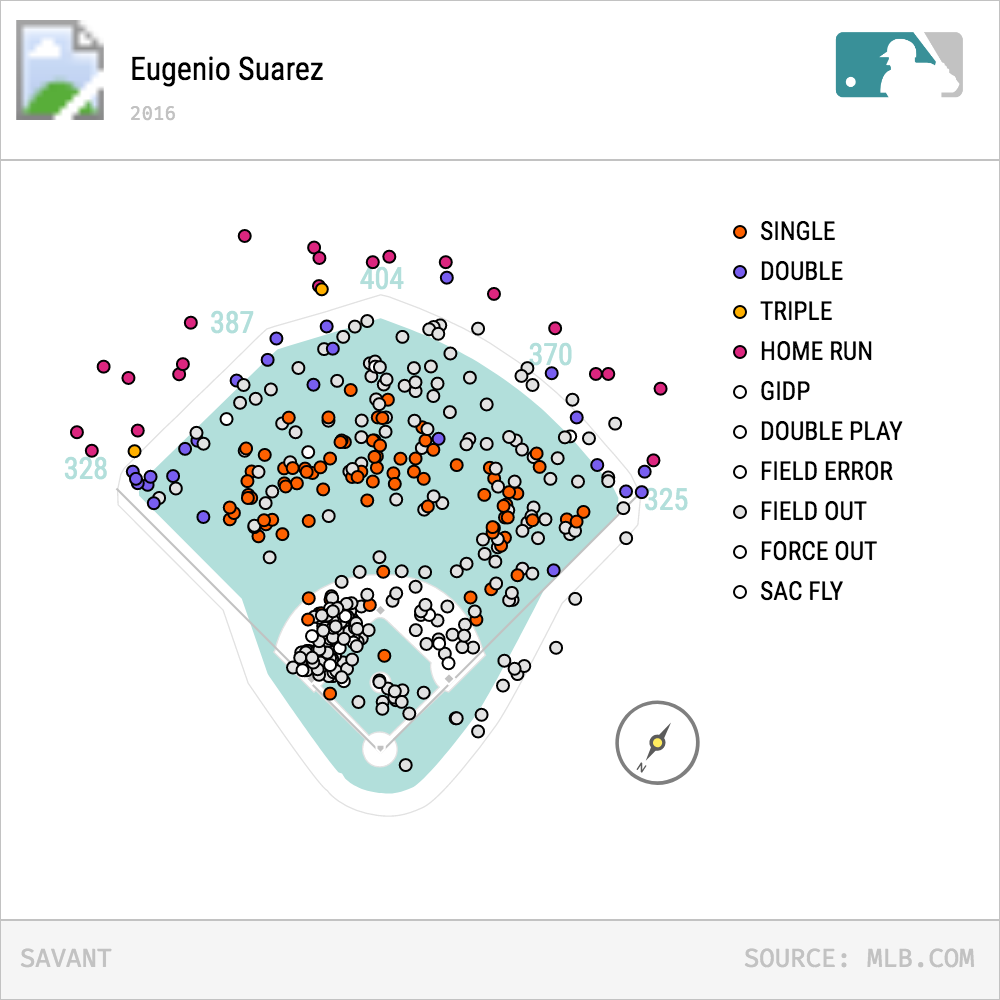 As his career went on, Suárez went through an evolution as a hitter. 2018 was his first truly great year, with Suárez hitting .283/.366/.526 with a 135 wRC+. A lot of that can be attributed to his becoming much more of a pull-heavy hitter. While he still sprayed hits all around the field, in 2018, his HRs were predominantly to the pull side. 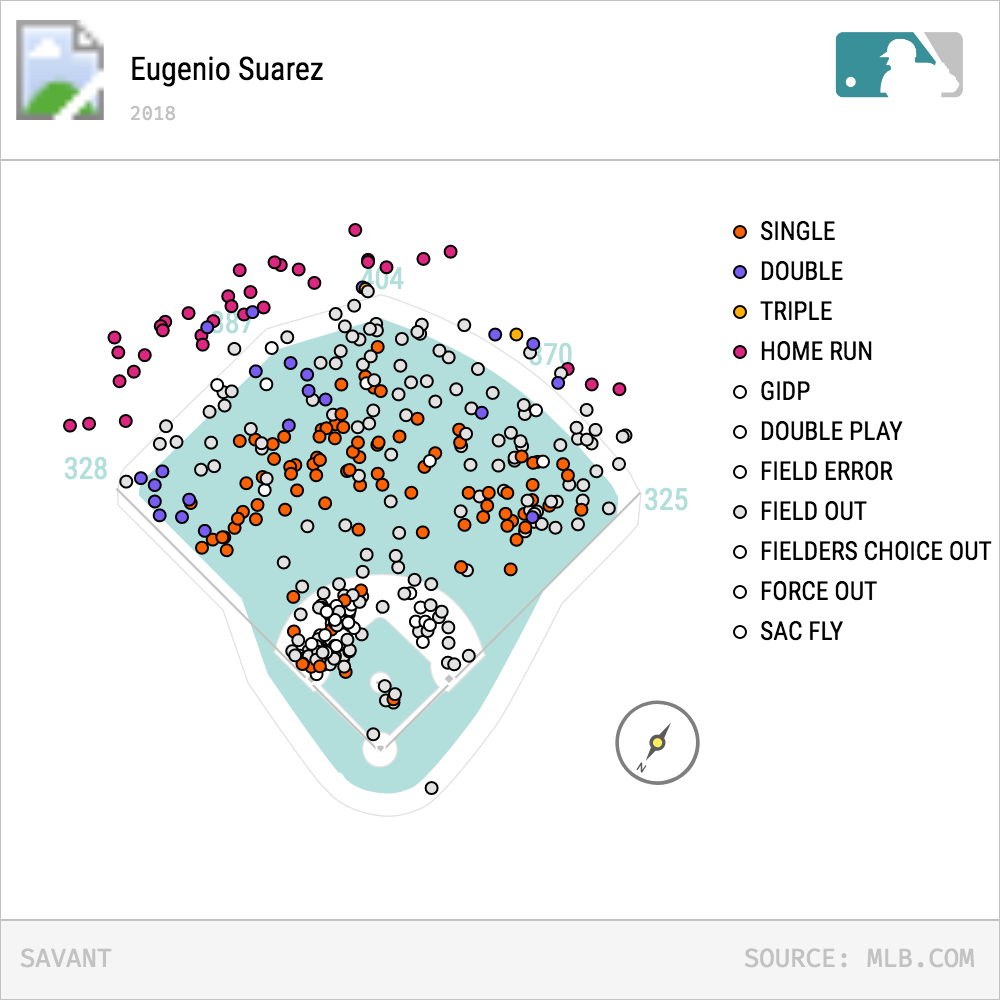 Suárez was the Reds’ most important hitter in 2019, hitting .271/.358/.572 with a 133 wRC+ and .381 wOBA, to go along with 49 HR. He backed up his numbers with impressive StatCast metrics as well, posting an elite 14% barrel rate, along with a 40.8% hard hit rate that ranked well above league average. His .361 xwOBA, while below his actual .381 wOBA, showed confidence that he could maintain his success in the future. He did so by continuing the shift to being a pull hitter. By 2019, the vast majority of hits and home runs were to the pull side. This is backed up by his batted ball profile on FanGraphs, as his percentage of batted balls to the pull side of 52.0% in 2020 was by far the highest of his career. 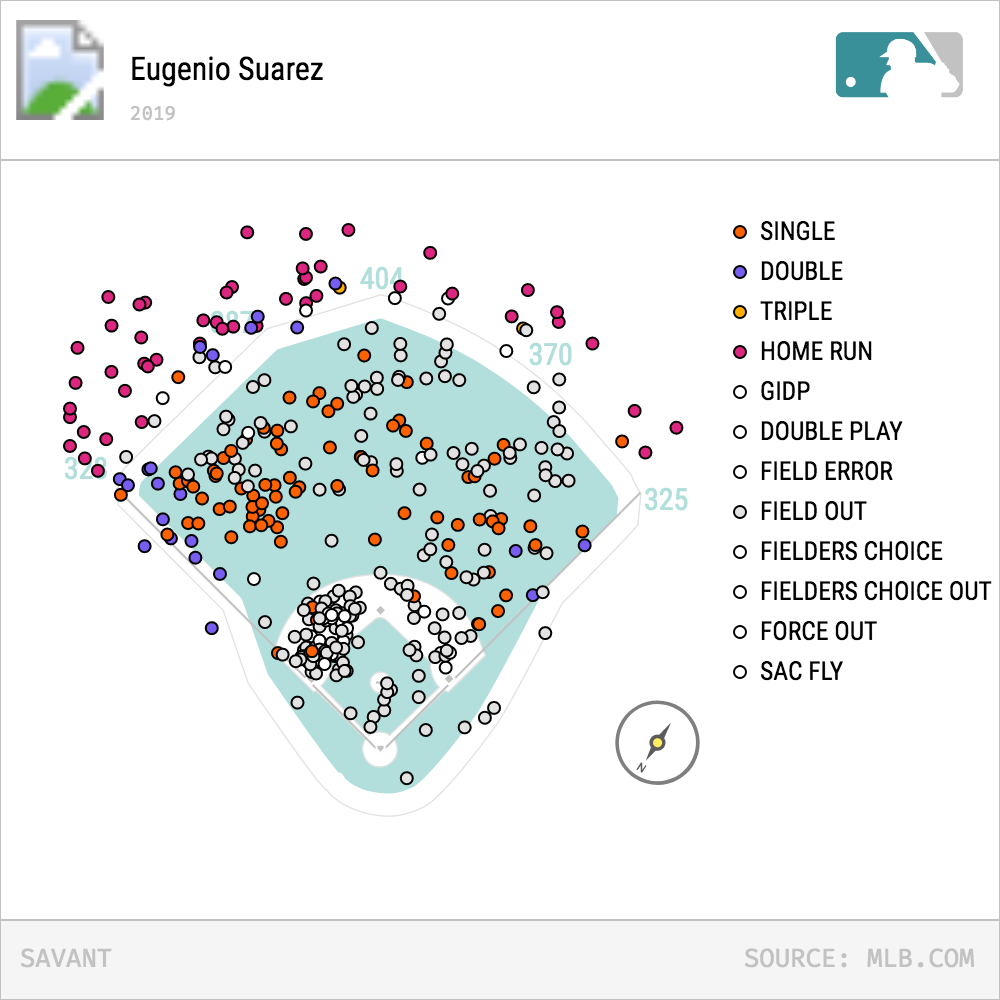 A quick glance at his StatCast page provides reason for optimism, as his 11.9% barrel rate and .339 xwOBA are well above league average, and his .216 xBA and .456 xSLG are also better than his actual numbers. Suarez’s walk rate and strikeout rate are better than his 2019 numbers and he has just a .161 BABIP this year.

Suarez has begun to heat up of late, hitting .233/.281/.533 with 3 HR since the team’s return from their COVID-induced break prior to Thursday’s doubleheader, though those numbers still leave something to be desired. In that period of time, he’s sporting a .167 BABIP.

So what has been the problem for Suárez thus far in 2020?

A glance at Suárez’s batted ball profile shows he is still pulling the ball a lot, as he did in 2019.

Suárez has, however, seen a shift in his batted ball profile with regards to hitting ground balls, line drives and fly balls. He has seen an overall decrease in line drives, while increasing his ground ball frequency.

This shift has been even further amplified in balls Suárez has hit to his pull side in 2020. He has seen a massive spike in pulled ground balls, while hitting fewer fly balls and line drives to the pull side. He has not recorded a hit on a fly ball to the pull side this year reflecting his decrease in power.

The chart below is for all batted balls to the pull side by Suárez, from 2016 through 2020. Most notably, Suárez’s launch angle on pulled balls has decreased to 0.3 degrees in 2020, supporting the previous data of his increase in ground ball rate to the pull side. Additionally, he isn’t hitting the ball hard to the pull side as you would expect, posting the lowest average exit velocity of his career. That has led to a drastic decrease in BABIP and ISO, and is a big part of his struggles in 2020.

From his 2020 spray chart, you can identify two pulled HR in a month. You see many pulled ground balls, but far fewer pulled balls hit to the outfield. Three of his HR have been to center field, and he’s had two other batted balls deep to center. 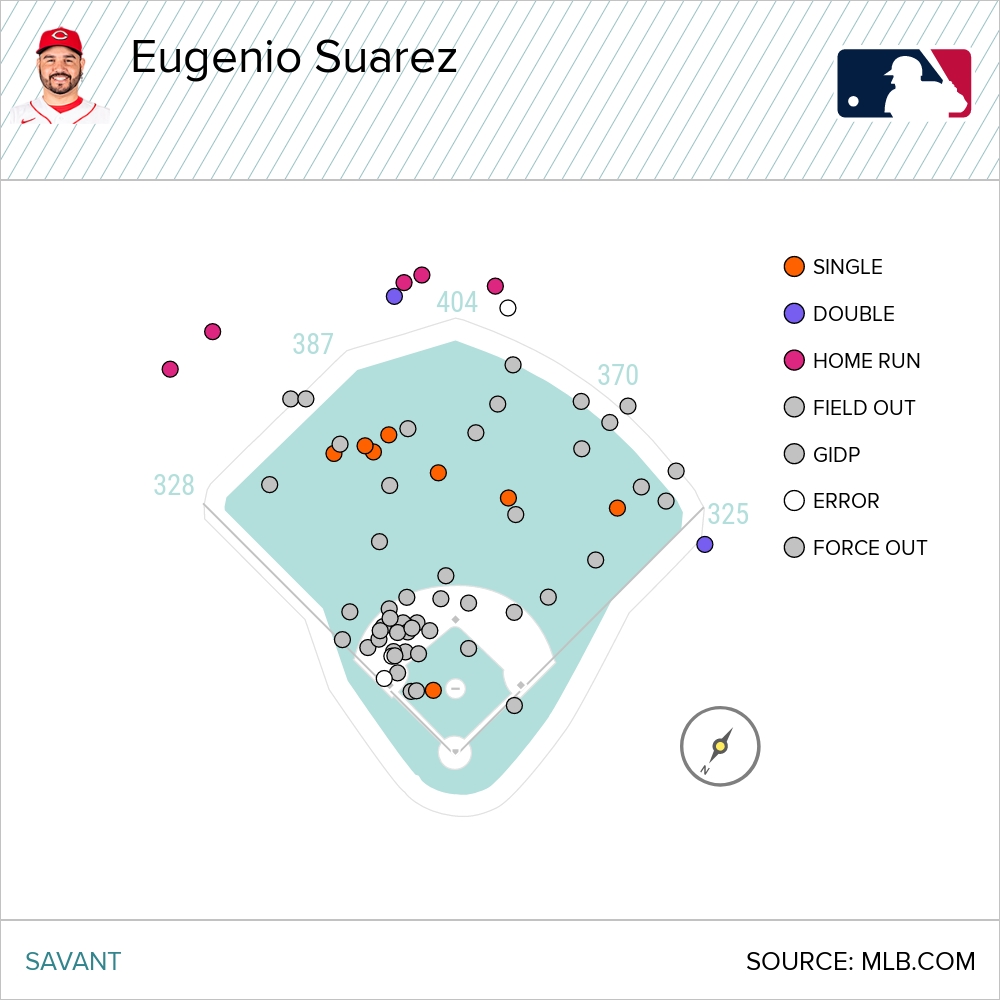 As Reds fans hope that Suarez starts to pull out of his slump, what should we look for?

Hitting the ball in the air with authority to left field. There were encouraging signs in yesterday’s doubleheader. Suarez pulled a line drive to left for a single and hit a solid fly ball to left field in the first game. In the top of the 7th inning of the second game, he blasted a 2-run homer to left-center.

2020 has been a challenging year for Eugenio Suarez. But those hits yesterday provide reason for optimism. 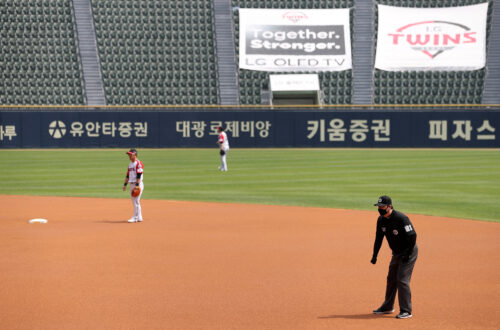 Checking in on Former Reds in the KBO

Great research, Kyle. This definitely backs up the eye test just from watching Suárez every night. Just hasn’t elevated the ball much. Hopefully he’s starting to come out of the slump with 3 HR in his last 5 games.

Nice work, this makes a lot sense. Would be interesting to see if pitchers are attacking him differently to try to keep the ball on the ground.