The Reds played tonight’s game with nine pitchers in the bullpen. Seven of them didn’t pitch yesterday. The six best relievers aside from Tejay Antone were available. With the Reds trailing 3-1 in the top of the fourth inning, starter Anthony DeSclafani faced Cardinals shortstop Paul DeJong with bases loaded and two outs.

DeSclafani was making his first start in 10 days. He’d missed time due to the birth of his son. Prior to his previous start, he’d had a wait of eight days. So it’s understandable he’s having a difficult time getting into a rhythm. In another one of his starts, DeSclafani was tipping his pitches and the weak-hitting Pirates scored nine runs in two innings. Tonight, as DeJong walked up to the plate, DeSclafani had walked four batters and given up six hits in 3.2 innings.

Paul DeJong had missed 25 days earlier this year after testing positive for COVID. DeJong is an excellent defensive shortstop, having been a finalist for the NL Gold Glove last year. But he’d also belted 30 homers in a breakout 2019. That makes Paul DeJong one of the best all-around players in the game. He’s known for hitting fastballs.

The Reds were managed tonight by bench coach Freddie Benavides. Manager David Bell was serving a one-game suspension for the actions of his club Saturday night and excessive arguing. Benavides, in consultation one presumes with pitching coach Derek Johnson, chose to let DeSclafani face DeJong, despite those six ready relievers.

DeSclafani got ahead of DeJong 1-2. Then threw a fastball and knuckle curve nowhere near the strike zone.

Before he became a Reds broadcaster, Jeff Brantley had a major league career that spanned 14 seasons. He knows enough about catcher signs that even when there’s an opposing runner on second and Tucker Barnhart was using a code, Brantley knew what pitch the Reds catcher was asking for.

Usually, this kind of commentary comes after the fact, with perfect hindsight.

In this case, Brantley’s foreshadowing was enough warning to pay close attention to where Barnhart set up for DeSclafani’s fateful pitch. Way inside. Barnhart wanted the fastball to DeJong, the pitch Anthony DeSclafani insisted on throwing, inside. 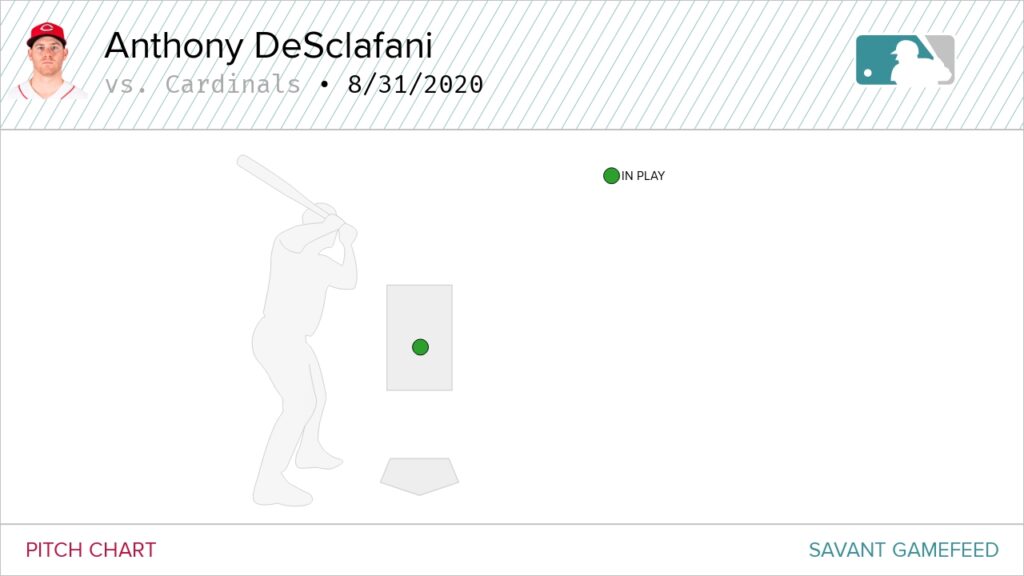 DeJong hit DeSclafani’s 94.4 mph fastball 409 feet into the humid Cincinnati night. The game was over.

Michael Lorenzen threw 57 pitches in relief of DeSclafani, 36 for strikes. Over 4 innings, Lorenzen scattered three harmless base runners. He surrendered homers in his first three appearances in 2020, but hasn’t in his last 9, spanning the entire month of August.

Joey Votto had two hits. Jesse Winker had a double and single. Eugnio Suarez had a single and three-run homer (396 feet) in the 9th inning. Aristides Aquino, starting in his first game in 2020, was 0-4 with three Ks.

The Reds and Cardinals are at it again tomorrow night at 6:40 pm. After playing 12 seasons in the Korean baseball league, Kwang Hyun Kim is now starting for the Cardinals. Kim shut the Reds out over 6 innings a little more than a week ago. Sonny Gray goes for the Reds Here are the pitchers’ stats:

Wow. Great info. Wrong pitch, terrible location. Against one of the better hitters in the lineup. With the bases loaded, and after having allowed more than half of the hitters so far in the evening to reach base, and with a ton of fresh arms available, he was left in the game. Recipe for disaster, also known as losing.