Luck — both good and bad — plays an enormous role in baseball.

That’s not to say that skill — physical and mental — isn’t a huge factor as well. Certain people are faster, stronger, smarter, have better reflexes, discipline, etc. Those are innate qualities and can also be developed through training. They decay with age. Those attributes give players, and their respective teams, an edge.

Among the advances in understanding baseball that sabermetrics has given us are perspectives on and ways to measure the dual factors of skill and luck. Analysts have developed ways to separate skill from luck and calculate their respective contributions. We’ve learned that while luck may even out eventually, it doesn’t over the course of a game, a week, a month or even a season.

Those understandings have profound implications for evaluating and projecting player performance. Skill is durable, luck isn’t. A player who has been unlucky would expect to show improved results in the future. While new expression of that phenomenon comes adorned in avant guard statistics, the idea is as old as the hills.

After 14 games, the Reds are 6-8. In three of the previous four games, they scored 2 runs on 11 hits. Is this group of players bad at hitting, or have they been unlucky?

A fashionable way to measure hitting luck is to look at a player’s Batting Average on Balls in Play (BABIP).

It’s akin to the familiar statistic of Batting Average, except for leaving out strikeouts and home runs. It’s calculated with a formula that simply measures the number of times that player’s ball falls in for a hit as a percentage of balls he put in play. Strikeouts, walks and home runs are considered not in play. League average BABIP has hovered around .298 for years.

To figure out if a player has been lucky or unlucky, it’s tempting to compare that individual’s current BABIP to league average. If his BABIP is way above .298, you conclude he’s been charmed. Well below .298, and he’s been ill-fated.

But that’s not the way it works, because BABIP isn’t strictly a function of luck. Other important variables influence how often a player successfully gets a ball into play: the opposing defense and pitching and his own batting skill.

Defense Batters who have faced better defenses should have a lower BABIP. The quality of the opposing team’s defense is based on the talent of its players and how aggressive and accurate they are at positioning players. When that practice was exotic we called it “the shift.” Now, it’s so common it’s just defense.

Pitching Batters who face better pitchers will also have a lower BABIP. For the most part, pitchers can’t control where the ball goes once it’s put into play. They determine strike outs and walks, but not whether that ground ball goes for a double or double play. But to a small degree, one that can add up, through velocity, movement, location and deception, pitchers can have a limited influence on the quality of contact. And that raises or lowers a hitter’s BABIP.

Hitting Skill One other important variance in BABIP comes from the batter’s skills as a hitter — both physical and mental. Players possess different talent levels in terms of eyesight, reflexes, eye-hand coordination, strength, agility, speed, and so forth. Many of those qualities can be developed through training. Players also have varying mental attributes such as pitch identification, ability to predict a pitch, discipline in repeating their process, etc. Take all those factors and you end up with certain players who are more likely to hit line drives (which have a higher BABIP) than others. You end up with Joey  Votto and Jose Peraza at opposing extremes.

Comparing a player’s BABIP to the league average of .300, given a large enough sample, is the way to measure that player’s skill, not his luck. For example, Joey Votto’s career BABIP is .347 and Mike Trout’s is .348. By contrast, Tucker Barnhart has a .293 BABIP and Freddy Galvis .290.

The way to use BABIP to measure luck is to compare the player’s current BABIP to his own career BABIP. But even then, your analysis is confounded by the possibility that batter may have faced uncommonly good defense or pitching, or maybe he’s in a legitimate slump. Each of those factors would produce a lower-than-expected BABIP.

Here are the Reds BABIPs before last night’s game: 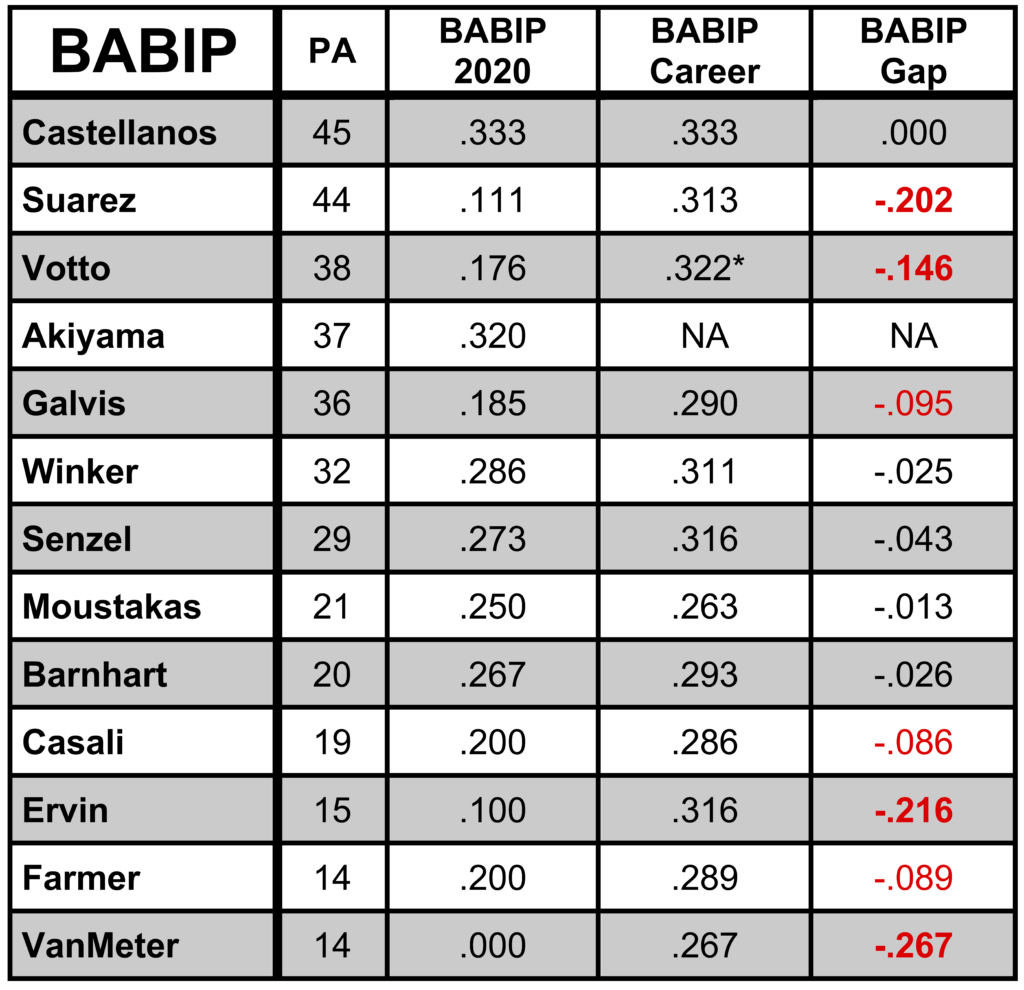 What should you do with this data?

But again, while these numbers may suggest whether a player has been lucky or unlucky, it’s an imprecise and possibly misleading way to measure that. Eugenio Saurez might have a low BABIP 2020 because he’s faced good pitchers, been robbed by great defensive plays or simply because he’s been swinging poorly, popping the ball up more than usual. It certainly doesn’t mean he’s had 200 points of batting average worth of bad luck.

One of the daily miracles performed by the advances in data measurement is the ability to determine how hard, how high and how fall a bar is struck. Thanks, first to radar, and now high-speed cameras installed in every park, new automated technology quantifies the game in ways that were previously unmeasurable. How accurate? To within a quarter of an inch. New in 2020, MLB is now using the same system pro tennis employs for line calls.

With that information the stats folks can match any struck baseball to the universe of other balls that have been hit the same. Then they compare real-world outcomes. That’s how next-generation tech calculates whether a ball should have fallen in for a hit. Or more precisely, what the odds are that a certain batted ball would go for a hit.

A batter’s xBA tells us what the player’s Batting Average should be assuming average luck. xBA neutralizes the variance in defense, pitching and skill. It’s the Batting Average the player earned given the balls he actually hit. If a player’s BA is above his xBA, he’s been lucky relative to other players. The reverse is true for players with xBA > BA. That guy has been unlucky.

So, if you want to find out whether a batter has been lucky, there’s a way to do it. And it’s not his BABIP.

xBA is the statistic you’re looking for.

Now, xBA takes a little more digging, at least for now. You find it at the Baseball Savant site where MLB’s official Statcast data is displayed. Search for the player and you’ll find xBA in his Career > Statcast Batting chart.

This is a segment of the chart for Christian Yelich of the Milwaukee Brewers. The blue arrow points to the xBA column. The green arrow is aimed at Yelich’s xBA as of this morning (.174) and the orange arrow shows where his career “ALL” xBA number is (.314). You can compare those two numbers and also his batting average (.125) and conclude that Yelich has had about 50 points of bad luck (the difference between his BA and xBA) and he’s done about 140 points of bad at hitting so far in 2020.

Here are the Reds xBA numbers going into the game last night: 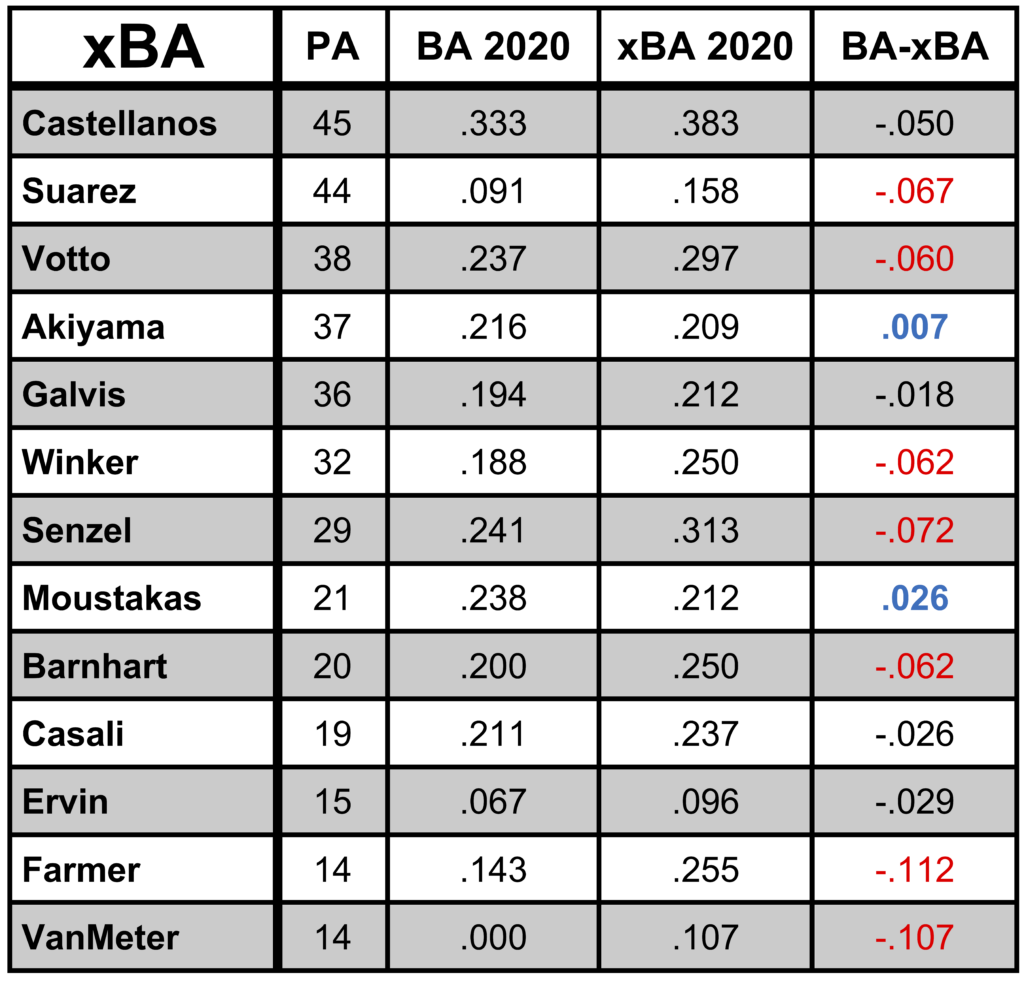 What does this data say:

When Reds front office personnel such as GM Nick Krall and manager David Bell say the Reds have been unlucky so far, this is what they’re talking about. That’s not to excuse all the Reds losses as due to bad luck. But this data should give one pause before reaching negative conclusions about the team’s true talent based on the results so far. To paraphrase U2, don’t let the small sample of BABIP grind you down.