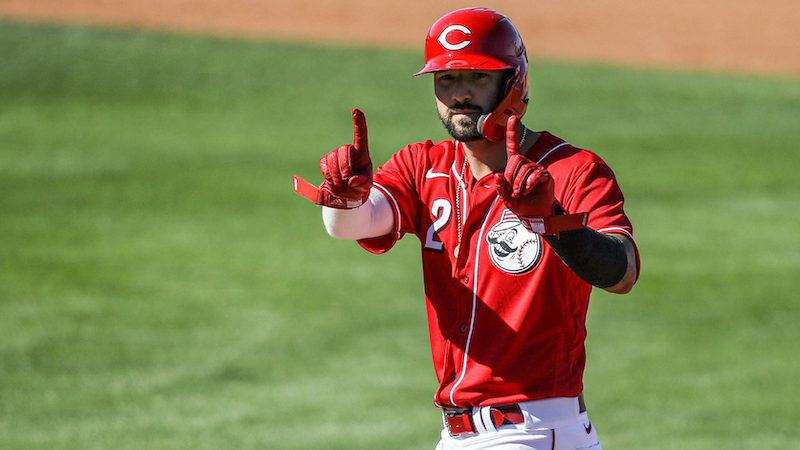 The Reds started off the 3-game series in Milwaukee with a dominant 8-3 win over the Brewers. They combined strong pitching from Trevor Bauer with effective platoon hitting against LHP Eric Lauer.

It was one year ago this past Monday that Trevor Bauer debuted for the Reds. The club had engineered a three-way trade that sent Yasiel Puig to Cleveland and Taylor Trammell to San Diego. Bauer was disappointing in his 10 starts for the Reds last fall, but his outstanding launch to the 2020 season surely was what the club had in mind when they made the deal. Bauer has pitched at a Cy Young level.

Tonight, Bauer struck out the side in the first inning and recorded all the outs in the second inning on whiffs as well. Over 6 innings, Bauer K’d 12 Brewers. In his first start of the season against Detroit, he struck out 13 Tigers. His career high is 14. Bauer gave up three hits and a walk.

Bauer was a little heavy on his fastball tonight, throwing it 55% of the time compared to 50% in his previous two games. He induced whiffs on 44% of the swings he got the fastball.

Bottom line: In three starts and 19.1 innings, Trevor Bauer has struck out 32 and walked 4.

Bell was able to use bullpen arms the final three innings that needed a good appearance. Cody Reed pitched a shutout 7th with two strikeouts. Pedro Strop threw a handful pitches before leaving the game with an apparent groin injury. Lucas Sims relieved Strop and gave up a 2-run homer to Christian Yelich before getting 3 outs in the 8th. Sims returned in the 9th and finished the game off with a 1-2-3 inning including two strikeouts.

The Reds jumped on Brewers starter Eric Lauer for six runs in the second inning. Christian Colon started things off with a walk. Jesse Winker followed with a single (notable that it was off a left-handed pitcher). Kyle Farmer got the Reds on the board with a double to left field. Nick Senzel drove in run number two with a sacrifice fly to deep right field. Nick Castellanos doubled in Farmer for a 3-0 lead. Eugenio Suarez walked — worth noting that even as Suarez has struggled at the plate, he’s continued to contribute to run scoring with walking.

Matt Davidson delivered the big blow with a 3-run homer. Davidson may prove to be a real weapon against LH pitchers in the DH spot, although tonight he handled 1B for Votto.

Castellanos added two more runs with his seventh homer of the year in the 6th inning. It was an opposite field blast and tied the right fielder for the Major League lead.

Winker, Farmer, Davidson and Castellanos had two hits. Suarez had a hit and two walks.

Farmer handled the shortstop position tonight with ease. He turned a couple DP and made other routine plays. You wonder if Farmer might compete with Freddy Galvis for playing time. Farmer is a much better hitter against LHP. Galvis has been less than stellar on defense.

The other negative tonight is Nick Senzel leaving the game in the 4th inning with reported groin tightness. Senzel was grabbing at his leg in the first inning after he hustled from first to third on a Matt Davidson single.

The Reds and Milwaukee play tomorrow night at 7:10 pm ET. Anthony DeSclafani goes for the Reds, following his excellent start in Detroit when he threw 5 shutout innings, giving up only 3 hits.

Bauer was just awesome. Fun to watch, unless you’re Ben Gamel. Bauer K’d him twice. The first was on a nasty breaking pitch that fell off the proverbial table, and the second was on a fastball perfectly placed at the bottom of the strike zone.

I almost felt sorry for Christian Yelich in his first two AB. Almost.

I immensely enjoyed the Yellich ABs against Bauer.

After the way Yelich has mashed the Reds, watching him K a couple of times on filthy stuff from Bauer was …. delicious. A little reversion to the mean was due.

Bauer threw one breaking ball after another that was taken for a strike because it was unhittable.

I thought Sims closed it out nicely. Strop had thrown 8 pitches before leaving, 7 for balls. So he only threw one pitch to the second guy who walked, both walks were charged to Strop. He induced a double play before the Yellich HR.
Yellich seems to be Yellich again.