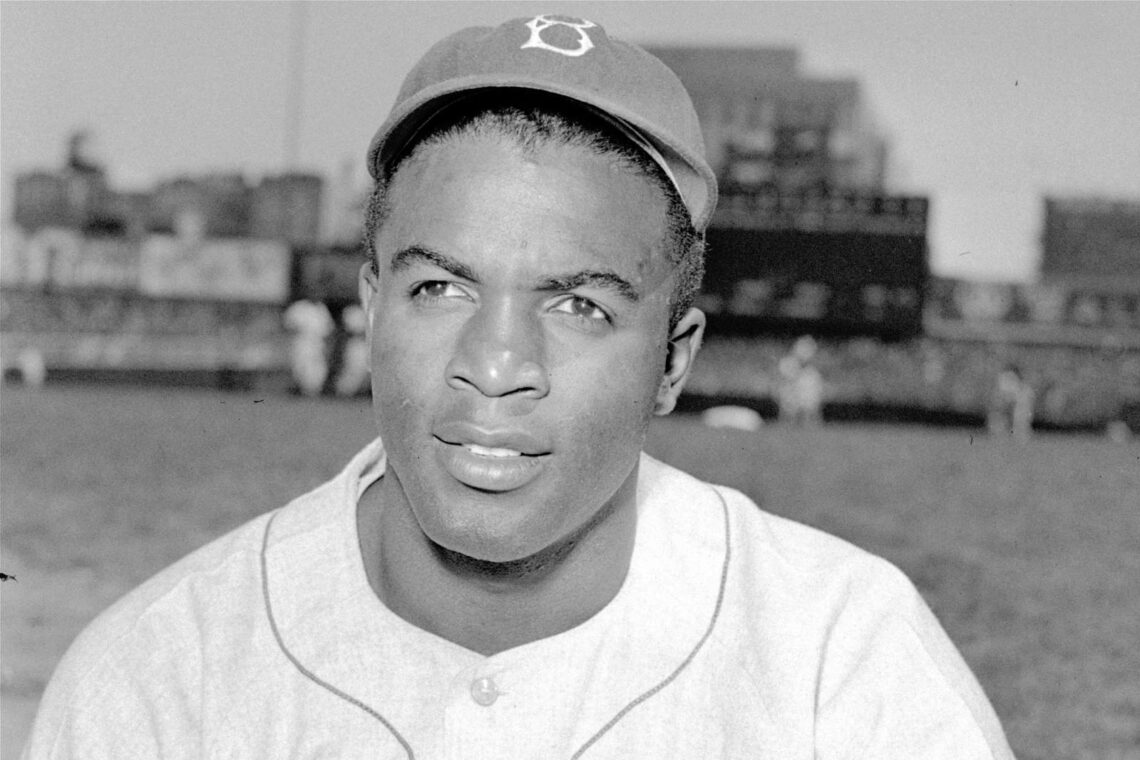 Major League Baseball  is celebrating Jackie Robinson today. In 1947, Robinson broke baseball’s color line that had relegated Black players to the segregated Negro Leagues. Robinson had played for the Kansas City Monarchs until Brooklyn Dodgers general manager Branch Rickey chose Robinson to integrate the major leagues. That year, Robinson was named Rookie of the Year and won the NL MVP two years later. The Dodgers won six pennants and a World Series in Robinson’s 10 seasons. Robinson was elected the Hall of Fame in 1962.

The tradition of all MLB players wearing Robinson’s #42 on his day of recognition (usually April 15) began in 2007, when Reds right fielder Ken Griffey Jr. asked commissioner Bud Selig and Robinson’s widow for permission to wear the number in a game.

On April 15 each season, every team in the majors celebrates Jackie Robinson Day in honor of when he broke the color barrier in baseball, becoming the first African-American player in the 20th century to take the field in the big leagues.

This year, dozens of Black baseball players are donating their salaries from today and tomorrow to support racial justice initiatives. This terrific video was narrated by Dodgers OF Mookie Betts.

“Jackie Robinson made my success possible,” said Dr. Martin Luther King Jr. “Without him, I would never have been able to do what I did.”

Don’t look now, the Reds have won three in a row.

It’s worth saying out loud that Tyler Mahle was the Reds fifth starting pitcher last year and made 25 starts. He showed steady progress on fundamentals from 2018 to 2019. Despite that improvement, the Reds signed Wade Miley to a 2-year free agent contract and announced he would become the fifth starter. Local writers announced the “vacancy” in the rotation had been filled.

That a vacancy existed must have seemed like big news to Mahle. Tyler Mahle is 25 years old and still figuring things out. But one question he appears to have answered is what his second pitch should be. The key to Mahle’s early success as he rocketed through the Reds system was fastball command. Beyond that, Mahle threw a slider most years, but in 2019 he abandoned the slider for a curveball.

Tyler Mahle with 12 whiffs on his slider tonight, his career high for any breaking pitch. Had only topped 6 whiffs in a start one other time. Huge development for him if he can keep it going.

Mahle struck out 11, one short of his career high, and walked only two batters. The only two hits he gave up were first-inning home runs to Anthony Rizzo and Kyle Schwarber. Mahle’s fastball topped out at 96.7 mph, the pitch he used to strike out Schwarber swinging in the 6th inning.

Tonight was Tyler Mahle’s fifth appearance and fourth start. With Wade Miley being placed on the IL this afternoon with shoulder soreness, Mahle looks to get another couple starts.

Amir Garrett relieved Mahle in the 7th, striking out Victor Caratini and recording a shutout 8th inning, finishing with inducing Rizzo into a double play. Robert Stephenson, making his third appearance since coming off the IL, got a strikeout before giving up a single and home runs to Willson Contreras and Jayson Heyward to make the score 6-5.

Raisel Iglesias was called on to save the day, which he did. He retired the final two batters on a fly ball and grounder.

You can actually pinpoint the second when his heart rips in half. pic.twitter.com/OhoCsTdl42

Geno has homered in 4 of his last 6 games! 👀 pic.twitter.com/Qa3lzrrwUv

The Reds and Cubs play a doubleheader tomorrow. The first game is at 4:10 pm and the second, a makeup for a rainout on July 30, follows right after. As of 6:45 pm, the Reds hadn’t announced who their pitchers would be. The Cubs are starting Yu Darvish in the first game and Alec Mills in the second. Here are their stats:

Darvish is one of the best pitchers in baseball. The Reds were scheduled to face him in the game that got rained out on July 30 and missed him. As a pure baseball fan, you hope the Reds assign Trevor Bauer to that game. Bauer and Darvish are in any conversation of who have been the five best starters so far in 2020.

Alec Mills has pitched parts of three major league seasons. He was drafted by the Kansas City Royals in 2012 and traded to the Cubs in 2017. Mills throws a bunch of pitches including a 90-mph fastball. The Reds faced Mills on July 28 in one of their everyone-in-the-bullpen-give-up-a-home-run games. Mills struck out three and walked two in six innings. He gave up a homer to Nick Castellanos.

Looks like you are getting your wish with the first game pitching duel. Thanks for the recap, Steve.

Darvish-Bauer should be a great one.

I liked seeing Matt Davidson getting a start against a RHed pitcher. Not that I want him in the lineup every game against RHed pitching, but he’s better than some options Bell has gone with for DHing. His BA and OBP are much lower against RHed pitching, but he hits for as much power. His career splits: .270/.347/.485 against righties, 07/.273/.420 against lefties. So his ISO is virtually the same against righties (.215) as against lefties (.213).

Agree. Davidson’s career wRC+ vs. RHP is 88. Not as good as he is against LHP, but not awful, either. Especially against a pitcher who has a reverse split which may indicate something about his pitch portfolio that makes it favorable for Davidson. I’ve also read that Davidson is a good infielder. Used to be a 3B but lots of time at 1B lately.

The Davidson as a good fielder who used to play 3B is new to me. Good to know, and could come in handy.