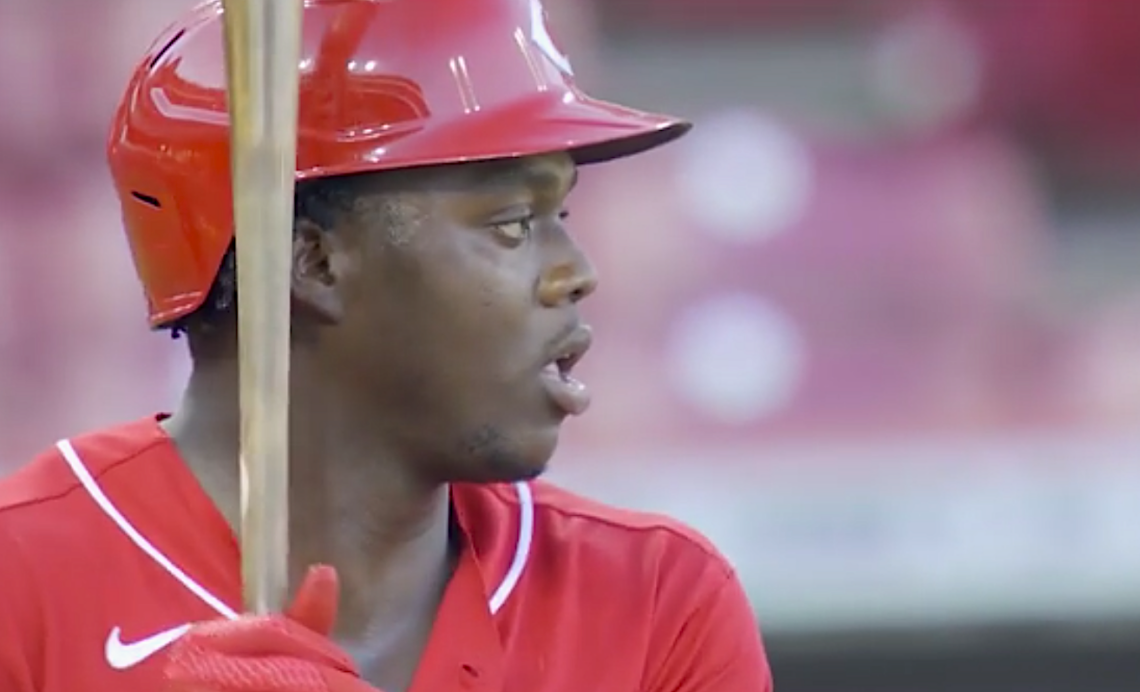 After blowing a three-run lead, the Reds came back to win game two of Saturday’s doubleheader over the Cubs on a walk-off wild pitch.

Down 5-4 entering the seventh inning, the Reds had the pleasure of facing the erratic Craig Kimbrel. Curt Casali and Nick Castellanos drew walks to put runners on first and second with one out. Aristides Aquino, the 29th player on the roster for the doubleheader, came through with a single to score pinch-runner Freddy Galvis and tie the game.

Following a wild pitch to advance runners to second and third, the Cubs intentionally walked Eugenio Suarez to load the bases. Mike Moustakas then struck out on three pitches, bringing Jose Garcia to the plate. Garcia swung and missed at the first pitch in the dirt, but the ball got away from the catcher, allowing Castellanos to score the winning run.

How’s this for a win probability chart? 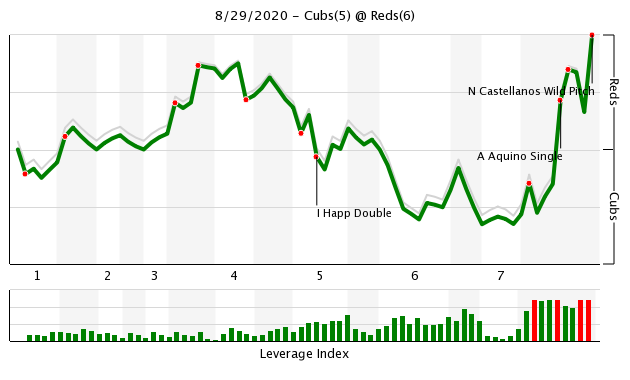 The win moves the Reds to 15-18, just half a game outside of a playoff spot.

Before the walk-off, though, it was quite an eventful evening.

Behind homers from Joey Votto, Curt Casali, and Jesse Winker, the Reds jumped out to a 4-1 lead in the third inning. And that’s when the chaos began. In the fourth inning, a ball got away from starter Tejay Antone and sailed over the head of Anthony Rizzo, who was understandably unhappy. Cubs manager David Ross and coach Mike Borzello were tossed in the aftermath. The Cubs then got back in it with a two-run home run by David Bote to make it 4-3.

The next inning, a pitch got away from Cubs pitcher Adbert Alzolay toward the head of Shogo Akiyama. The benches cleared and David Bell, Votto, and Winker were ejected from the game. Somehow, no Cubs were ejected after the altercation, although Rizzo did plenty of chirping. Everything seemed to unravel for the Reds after that with sloppy defense and an erratic performance from the middle relievers.

Michael Lorenzen was the victim of poor defense in the fifth, which allowed the tying run to score. Castellanos dropped a fly ball to right field to begin the inning, putting a runner on second. Following a strikeout, Ian Happ doubled to tie the game. Lorenzen got out of the inning with another strikeout and a groundout.

Tyler Thornburg turned in a disastrous outing in the sixth inning, allowing a single and two walks to load the bases with no outs. Only three of the 14 pitches he threw were in the strike zone.

Nate Jones got the tough duty of getting the Reds out of a bases-loaded, no-out jam. He allowed a sacrifice fly to Nico Hoerner to give the Cubs the lead, but worked around a walk with a strikeout and groundout.

Joel Kuhnel — called up after the first game of the day as Jesse Biddle hit the IL — threw a scoreless seventh, working around a pair of two-out singles.

To begin the night, Antone turned in a so-so outing in his second career start, allowing three runs in four innings. He struck out five and walked one. Home runs were his biggest downfall, accounting for all the runs surrendered. He got off to a tough start by allowing a cheap home run to Happ to lead off the game. The ball had a measly 2% hit probability but just grazed the very bottom of the right-field foul pole. In the fourth inning, Bote took Antone deep on a hanging slider.

The Reds offense showed life early after being shut down by Yu Darvish in Saturday’s first game. Votto answered Happ’s leadoff homer with one of his own (96.9 mph, 371 feet) in the bottom of the first. It was the 288th home run of Votto’s career, passing Tony Perez for third on the Reds’ all-time list.

Winker played add-on later in the third with a two-run laser that left the park in a hurry (113.0 mph, 388 feet). It was Winker’s hardest-hit ball of the season and trailed only Matt Davidson (113.1) for the hardest hit by a Red this year.

The Reds and Cubs will wrap up their four-game series on Sunday with a pitching matchup that heavily favors the good guys. First pitch will be at 1:10 p.m. EST. 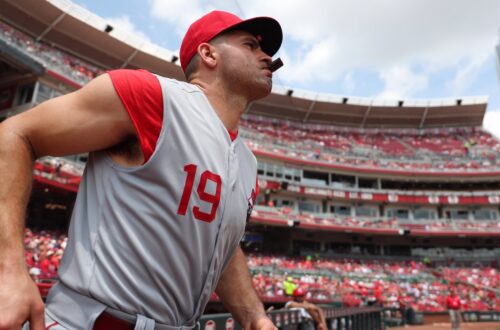 RC+ Preview: Reds vs. Cubs (August 8) – The Start of a Crucial Series

Matt did a nice job of describing how the Reds lost the 4-3 lead with sloppy play, nothing to add there.

I was more upset at what transpired with the ejections. Neither pitcher was trying to throw at anyone’s head and I don’t believe anyone thought they were. It was about managers arguing with umpires. I understand that Bell had a point to make with the pitch that sailed over Shogo’s head. But why go on and on? The Cubs have an inexperienced pitcher having command problems, you don’t want him ejected.

That opens the way for Rizzo to bark at Bell and get the Reds all riled up and Votto and Winker ejected.

Bell said after the game he went out to stop his players from getting thrown out. Didn’t end up working out that way because of Rizzo, but that was his intent.

is there a rule this year about automatic ejection if a player leaves the dugout during an argument ? Votto and Winker were thrown out before even saying anything. Why wasn’t Rizzo thrown out for yelling at Bell to get off the field.

In any case, the baseball gods didn’t put up with it. Aquino comes in for Winker and makes a nice running catch to save a run (at least) in the top of the 7th and delivers the game tying hit in the bottom of the 7th.

Both teams lost leads in very ugly ways, but a win is a win.

The post game commentators noted that in this Covid year, leaving the dugout is an immediately ejectable offense. MLB wants no group melees.

“I think this team is starting to come together!” (Manager Brown from movie Major League).
After all that fury and furor the Reds would have lost that second game in past years.

Liked a lot, how Akiyama didn’t even flinch at that pitch up and in, over his head. Compare that to how Rizzo reacted. Enough said.