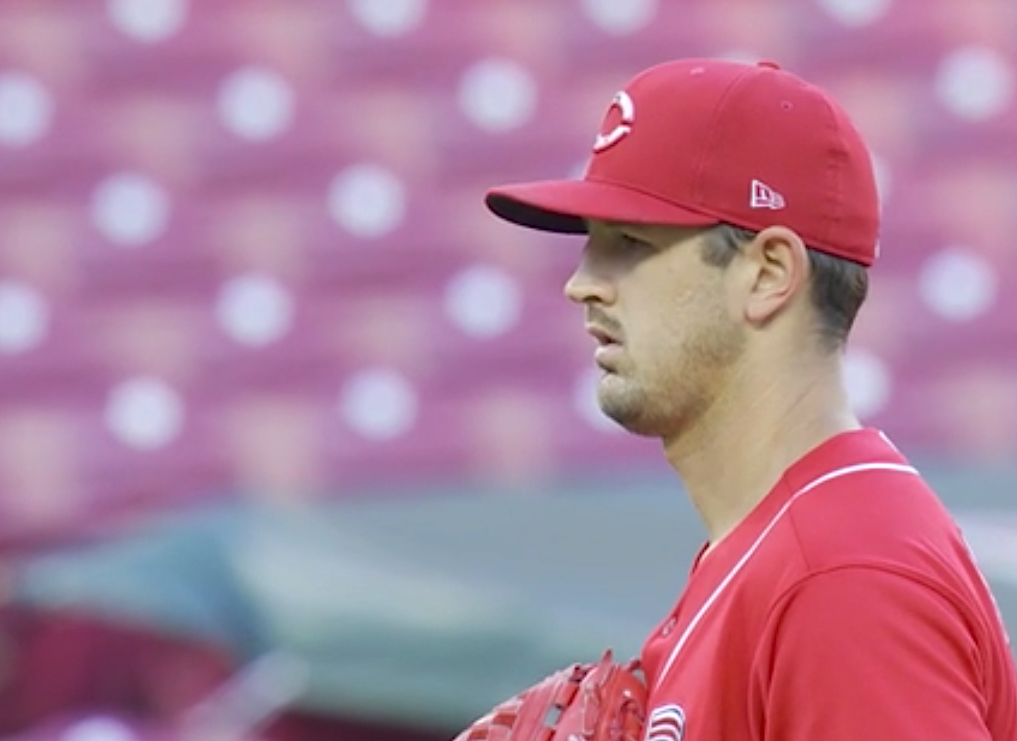 With a 2-0 lead in the seventh inning and a chance to extend the winning streak to four, the Reds bullpen again couldn’t hold onto a lead as the Indians stole a 4-2 victory on Tuesday evening.

The beat continued on for the Reds’ starting rotation. Tyler Mahle took the baton on Tuesday and turned in perhaps his best performance as a big-leaguer. The 25-year-old fired six shutout innings, surrendering only one hit, two walks, and a hit by pitch. Mahle struck out six, four with the slider he’s brought back in 2020, and racked up 13 whiffs — his highest total since May 31, 2019. Only one Cleveland hitter managed a hard-hit ball (95+ mph exit velocity) against Mahle.

Mahle got stronger as the outing went on. Although the right-hander had some uncharacteristic issues with command early in the game — needing 63 pitches to get through the first three innings — he tightened it up to retire the final 10 batters he faced on 35 pitches. Of note, Mahle returned to the mound for the sixth inning to face the Indians’ best three hitters for the third time: Jose Ramirez, Francisco Lindor, and Carlos Santana. Mahle has traditionally struggled the third time through the order. In his career, he has a 10.38 ERA, 6.77 FIP, and 5.97 xFIP when facing a lineup for the third time in a game.

Clearly, this was a big vote of confidence from manager David Bell and a test for Mahle, which he passed with flying colors by retiring the side in order. While the Indians offense is a mess right now, this was an encouraging start for Mahle. Bell will have an interesting decision to make when Wade Miley returns from the injured list.

The Cincinnati offense gave Mahle an early lead against baseball’s best pitcher so far in the 2020 season, Shane Bieber. Nick Castellanos blasted another home run in the first inning to put the Reds in front. It was perhaps his most impressive homer yet, hitting the top of the batter’s eye in centerfield. Statcast estimated the distance at 409 feet, but it looked a bit further than that. Regardless, Castellanos now has six home runs in 11 games, tying him with Aaron Judge for the MLB lead.

Eugenio Suarez got off the schneid with a solo home run — his first of the season — to center in the fourth inning (418 feet, 108.9 mph) to extend the lead to two.

You know you love me, I know you care. #TakeTheCentral pic.twitter.com/C722WRGHlp

Bieber buckled down after the Suarez home run, allowing only a walk and two singles as he pitched into the eighth inning. The Reds couldn’t get anyone on base against Indians relievers James Karinchak and Brad Hand.

And unfortunately for Mahle, the bullpen blew another lead. Relievers allowed two runs without a ball leaving the infield in the seventh inning — not ideal against what’s been the worst offense in baseball thus far.

Pedro Strop was certainly hurt by poor defense, as Freddy Galvis made an error to begin the seventh inning. But he also walked two hitters to load the bases with two outs when he was ahead in the count 1-2 against both batters. Wildness has gotten Strop into trouble throughout his big-league career (10.8% walk rate), and it came back to haunt him tonight. He made a good pitch to Cesar Hernandez, who grounded weakly to first base — but so weakly (68.7 mph exit velocity) that he was able to beat it out for an infield single as Strop couldn’t handle the throw from Joey Votto.

The meltdown continued in the eighth inning. Nate Jones, who has missed considerable time with elbow injuries throughout his big-league career, was brought on for the second day in a row. He walked the first batter he faced (sensing a theme here?) and gave up the go-ahead home run to Franmil Reyes.

Making his first appearance in a week, Amir Garrett cleaned up the mess with a groundout and a strikeout. Cody Reed threw a clean ninth inning, hitting a batter and striking out one.

Notably, Mike Moustakas left the game in the sixth inning with a bruised left quad.

The Reds will travel to Cleveland as the series against the Indians continues on Wednesday at 7:10 p.m. EST. Tejay Antone will make his first major-league start (2019 minor league stats below; 2020 fastball velocity used).

Luis Castillo was originally scheduled to make the start, but he’s being pushed back a day. Tejay Antone will get the starting nod instead. The right-hander was dominant in his only appearance of the season, allowing one run in 4.1 innings against the Cubs on July 27. He’ll have a tough task squaring off against Mike Clevinger. After a strong 2020 debut, Clevinger was knocked around for four runs in four innings while walking five batters in his second start. Clevinger, a flyball pitcher, has had issues with home runs, allowing four of them in 11 innings.

When Miley returns, he could be valuable in the pen. He could partner with Sims as someone who can go long as needed. I’m not saying that just because Mahle had a great start tonight.

I’ve been a critic of the Miley signing since the start. He might help in the bullpen with another LH arm. Hard to imagine them putting the $15m free agent in the pen, though. Can’t understand why they gave him a 2-year contract for so much.