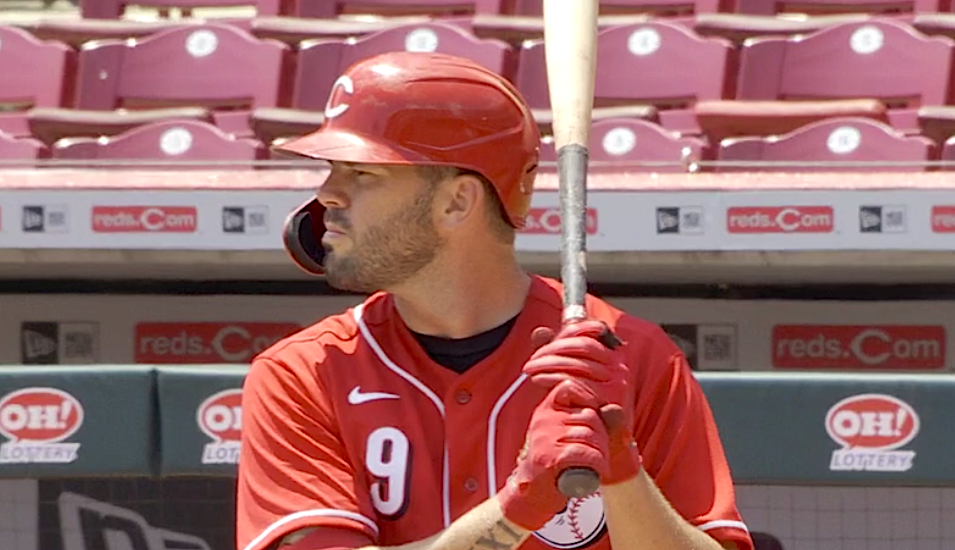 If the Reds are going to make a run at the postseason, it needed to start tonight. Led by a 3-run homer by Mike Moustakas and a dominant pitching performance by Trevor Bauer, the Reds did indeed pull out a 3-0 win. That’s the same score by which they lost last night. The Reds beat Yu Darvish and lost to Alec Mills. Go figure. Go, 2020.

Trevor Bauer, making his eighth start of the season, didn’t give up a hit until Victor Caratini lined a single to center to leadoff the 5th inning. By then Bauer had struck out 8 Cubs.

The Reds starter finished with ten strikeouts and no walks, throwing 112 pitches.

Bauer ran into trouble in the 8th inning. Two Cubs batters reached on singles, so with two outs David Bell summoned Lucas Sims from the bullpen. Sims, the subject of my post earlier today, retired Reds-killer Ian Happ on one pitch — an 81 mph curveball. Happ lined to second base.

Raisel Iglesias pitched the 9th and retired the middle of the Cubs lineup 1-2-3 on on 10 pitches.

The Reds didn’t waste time to break the team’s scoreless streak of 15 innings. Mike Moustakas launched a three-run homer into the right field bleachers off an 0-1 Yu Darvish curveball.

While a home run drove in all three runs, two walks contributed to Reds run scoring. Nick Castellanos and Jesse Winker had walked to add value to Moustakas’ blast. It was the first time Darvish had walked two batters in an inning this year and the first homer off a Darvish curve in 2020. 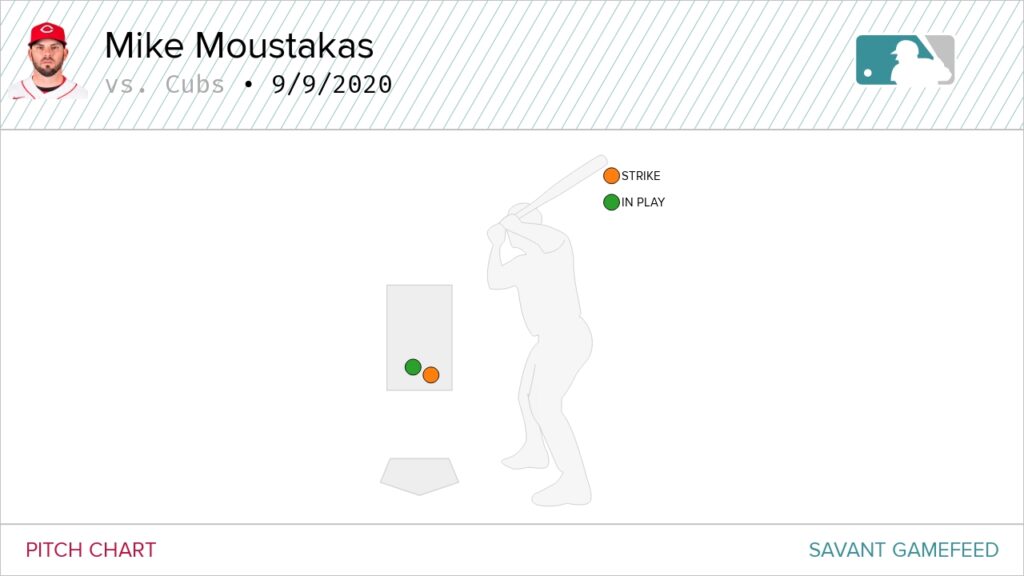 The Reds offense then went more than 5 innings without a hit. They managed only three more after the Moustakas homer, two by Shogo Akiyama. There were seven total hits in the game.

The Reds return to the friendly confines for one last battle with the Cubs tomorrow night. The pitching matchup is Sonny Gray against Adbert Alzolay. Gray received an extended break since his last start against the Cardinals on September 1. Alzolay is a 25-year-old righty, who is making his third start of the season.

Moustakas has been gradually heating up since the quad injury that I believe seriously affected his play. If he goes on a tear …

Shogo is getting more comfortable at the plate and is a solid all-around player. I believe he should be in the lineup (almost) every day, he can hit LHed pitching.

Votto has made the unluckiest out 3 times within the past week.

Given the other current options at SS, I was happy to see Galvis back. Why ? Because he hits the ball very hard sometimes, more often than his competition. He had a mysterious injury, I tweeted some of the Reds writers about his absence and they replied but if they knew anything, they weren’t saying. (Yes SS is a hole and I hope Garcia is ready soon, but he was put in a very difficult situation, jumping from A ball to the NL.)