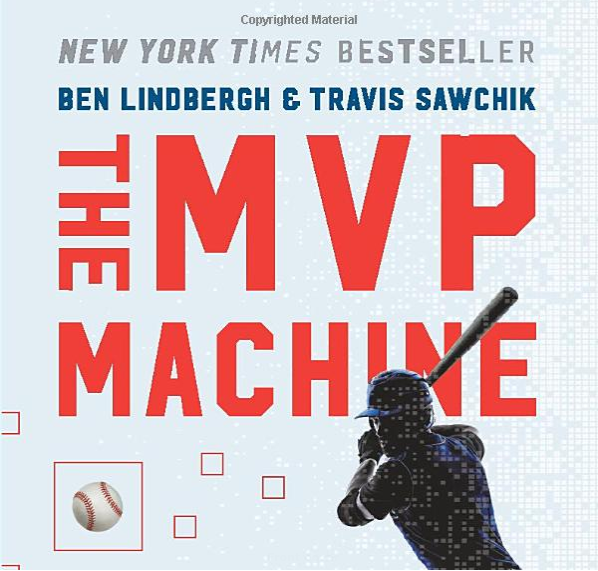 I’d heard nothing but good things about, “The MVP Machine: How Baseball’s Nonconformists Are Using Data to Build Better Players” by Ben Lindbergh & Travis Sawchik. I’d heard that it was essentially the “Moneyball” equivalent for the Statcast era and that’s more or less true. But more than Statcast numbers, it’s more about player development and not only how to see keys for outstanding players but how to develop, and in some cases even create, attributes to make players better.

MVP Machine focuses a bit more on pitching than hitting as pitching development is further ahead thanks to inventions like Rapsodo, a system designed to monitor spin and trajectory of pitches, and Edgertronic, a high speed camera. Edgertronic has been slowly revolutionizing how teams watch video of games and practices by having such a high rate of frames-per-second that even the most minute details such as finger placement on a pitch are fully visible and able to be analyzed. It’s probably a 65/35 split between hitting and pitching in the book but they do discuss how players like Justin Turner, J.D. Martinez, and Mookie Betts have used technology to tweak their swings to become more successful in what has been dubbed “The Fly Ball Revolution”.

Turner and Martinez were more drastic changes than Betts, but they all began using things that you’ve already read about on this site such as launch angle and exit velocity to find their best swing and become upper echelon hitters. Martinez recalls at one point that while he was trying to make adjustments to save his career — he had posted an 87 wRC+ in his first 3 seasons — he was told by coaches that swinging for line drives up the middle was what he should be trying for. His quote was, “Oh, you want a line drive right up the middle. Right off the back of the L-screen. Ok, well that’s a single.”

Using the available data, it was determined that the best hit you can have is a fly ball to the pull side with an optimal launch angle between 20 and 30 degrees. This struck me as odd because the 2020 Reds so far have the highest fly ball rate in baseball with 25.9%, the 4th highest pull rate in baseball at 40.6% (Astros lead with 43%), and tied for 7th best average launch angle at 14.3 degrees (Oakland leads baseball with an average of 17.9 degrees). That being said, it’s not surprising that the Reds are 5th in baseball with 75 HR and have the highest percentage of their runs scored via the home run. This tells me that they have bought into the numbers and are changing the hitting approach as a team to try to take optimal swings and use Great American Ballpark and her dimensions to their advantage.

Pitching is the driving force in this book and two of its main focuses are pitcher Trevor Bauer and Driveline innovator Kyle Boddy. Boddy very much fills the Bill James role in the book along with a few others as guys who don’t come from a baseball background who end up finding revolutionary tactics that MLB front offices had yet to discover. Boddy and Bauer, along with his father, had been separately experimenting with alternative pitching strategies, such as throwing with weighted balls and using wearable technology to track biometrics in order to allow the body to properly recover, far before anyone else and ended up crossing paths.

The book chronicles Bauer’s rise to the majors and ultimately his quest to invent a slider, a pitch he’d never really thrown, in the winter before the 2018 season. He knew the exact movement he was looking for in the pitch (0 vertical and 10in of horizontal) and used the technology to find the correct grip and arm angle to get as close to his goal as possible. He’s continued to use this pitch 11.6% of the time in 2020 and it’s arguably his best pitch, carrying a 39.2 Whiff% and a wOBA of .112.

Former Reds pitcher and current Reds Director of Pitching Caleb Cotham is also a central figure. He was a Driveline believer towards the end of his career and has carried it to his new venture. Part of the book focuses on baseball’s need to have coaches who are fluent in the new ways of player development but also knows how to relay this information in a way that players can understand and digest.

I find this interesting because one of my main criticisms of the book is that it does get a little dense at times and weighs you down with a lot of large words, big concepts, and lots and lots of numbers. It does a good job of making it easy to understand for the most part but I think it shows how having a guy like Cotham who understands it and can break it down so the info gets to the players who need it in a way that they’ll understand is immeasurably important. The data is only useful if it’s understood and used correctly.

Many teams are discussed in the book as being on the forefront of the new information revolution. The Indians are mentioned often due to having Bauer at the time the book was written, however they are derided a bit for indulging Bauer to a point but also trying to stifle him at other times. Especially his contentious relationship with former pitching coach Mickey Callaway and somewhat with manager Terry Francona. The Dodgers and Astros are also a big focus, and in the new editions there is a new afterword that touches on the sign stealing scandal and discusses how the info can be taken too far. The only major mention of the Reds comes when discussing Tony Cingrani, who is close with Caleb Cotham and was recruited by him to Driveline. He discusses being traded from the Reds to the Dodgers in 2017.

Cingrani’s quote is that the Reds’ organization “was a lot of old-school baseball guys, as opposed to [LA], it’s trying to embrace that analytics side.” He also notes that while the Reds did share some info with players it was pretty barebones and not tailored to individual skill sets. He also is quoted saying, “We were kind of on our own. It was just like, ‘Hopefully you have success. Good luck”.

Obviously, this paints the Reds in a pretty negative light, but this was still in the Walt Jocketty and Bryan Price regime. Since then the Reds have made some important moves such as hiring David Bell, Derek Johnson, Caleb Cotham and Kyle Boddy, trading for Trevor Bauer, and retooling their organizational message by trying to craft a singular strategy in every level of the minors and majors instead of players getting haphazard and contradictory philosophies at different stops.

While there’s obviously some questionable decisions in Bell’s in-game strategy, I feel like he’s very valuable in relating info to the players in the same way Cotham does and seems to have the respect of his players, as shown when he and Anthony Rizzo had words last month and Joey Votto and Jesse Winker immediately went to his aid.

I feel like the Reds were probably late to the table on this influx of knowledge and learning, but they are definitely not the last and the quality of their hires has helped close the gap between them and the top tier player development organizations. I think Bauer is a large piece of this too. It’s talked about multiple times in the book how he is more than willing to share his knowledge and help teammates to get better, and I think this also comes through on his YouTube channel where he has vlogged a good portion of this season.

I haven’t even scraped the tip of the iceberg of all the info the book presents. It’s a must read for anyone who’s interested in how the game is advancing from a culture where, in one of the anecdotes in the book, a player in the minors was getting fined for making mistakes and asked his manager how he can improve to not get fined and was told that he had to figure it out on his own, to a game where information is not only presented but accepted.

There’s a seismic shift happening in the foundation of most organizations and this is a great read on how to better understand it. I look forward to re-reading this book and definitely recommend that you read it too.

I love this book!