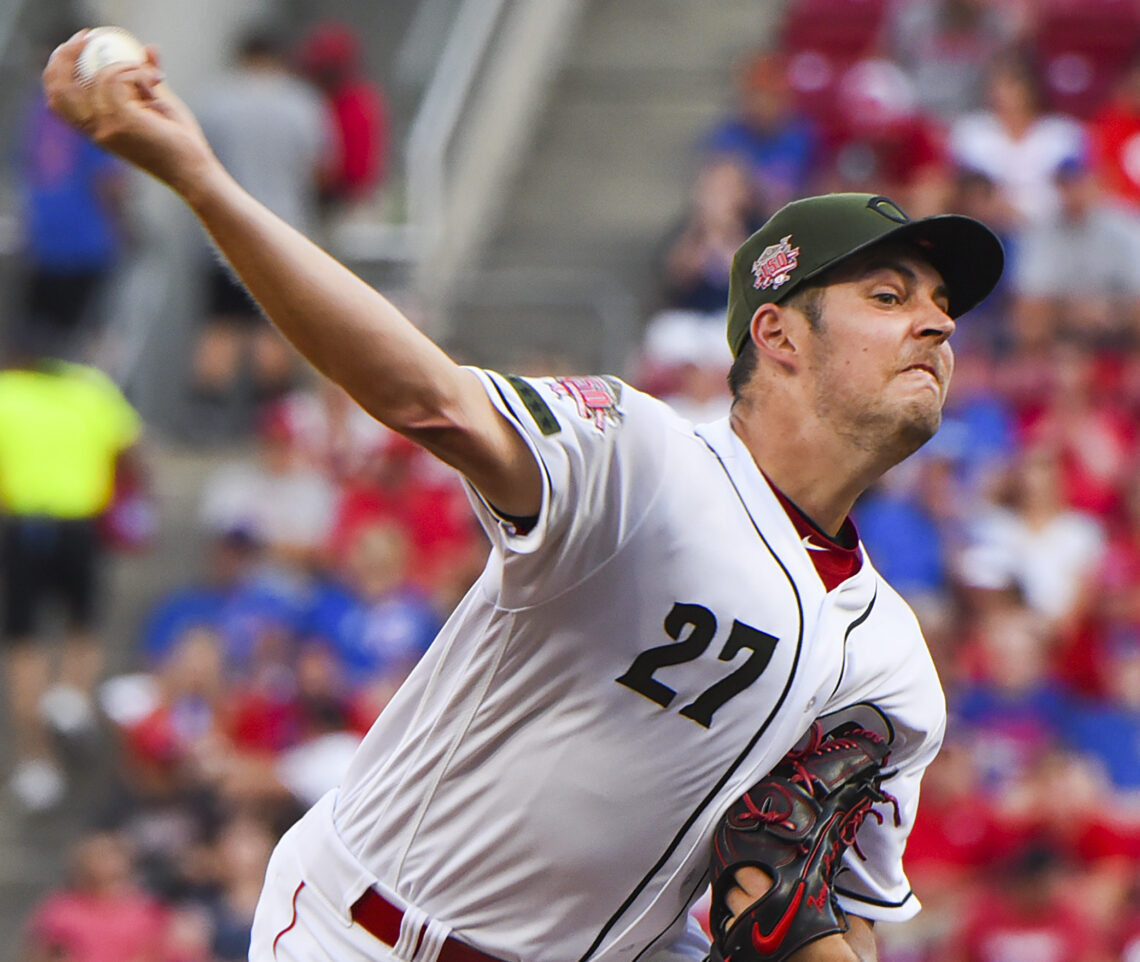 Before the trade deadline in 2019, the Reds acquired Trevor Bauer from the Indians in a three-way trade that saw them deal away Yasiel Puig and top prospect Taylor Trammell. While the front office hoped Bauer could lead the Reds on a postseason run last year, the trade was mostly made with eyes toward 2020.

Bauer struggled mightily in his 10 starts after the deal, allowing a 6.39 ERA, 4.85 FIP, and 4.44 xFIP while giving up nearly two home runs per nine innings.

With Bauer’s talent level, however, few people expected a repeat of 2019 in his first full season as a Red. Considering that he also pitched through torn ankle ligaments and back spasms last year, a rebound seemed like a safe bet in 2020 — and rebound he has. In fact, the only disappointing aspect of his 2020 is that we won’t get to watch him for a full season.

Along with Jacob deGrom and Yu Darvish, Bauer is a leading candidate to win the National League Cy Young in this shortened season. Dominant may be too weak of an adjective to describe how well he’s pitched. The 29-year-old has a 1.71 ERA in 58.0 innings, which leads the NL and trails only Shane Bieber for the major-league lead among qualified starters. And that’s far from the only category where Bauer finds himself among NL leaders.

You get the picture.

So, what has Bauer done to achieve this level of success?

The conversation can’t begin without discussing spin rate. This shouldn’t come as a huge surprise; Bauer has long been a poster boy for spin rates, thanks to his work at Driveline with current Reds pitching coordinator Kyle Boddy. But the amount of spin Bauer has added to all five of his primary pitches in 2020 is astounding: 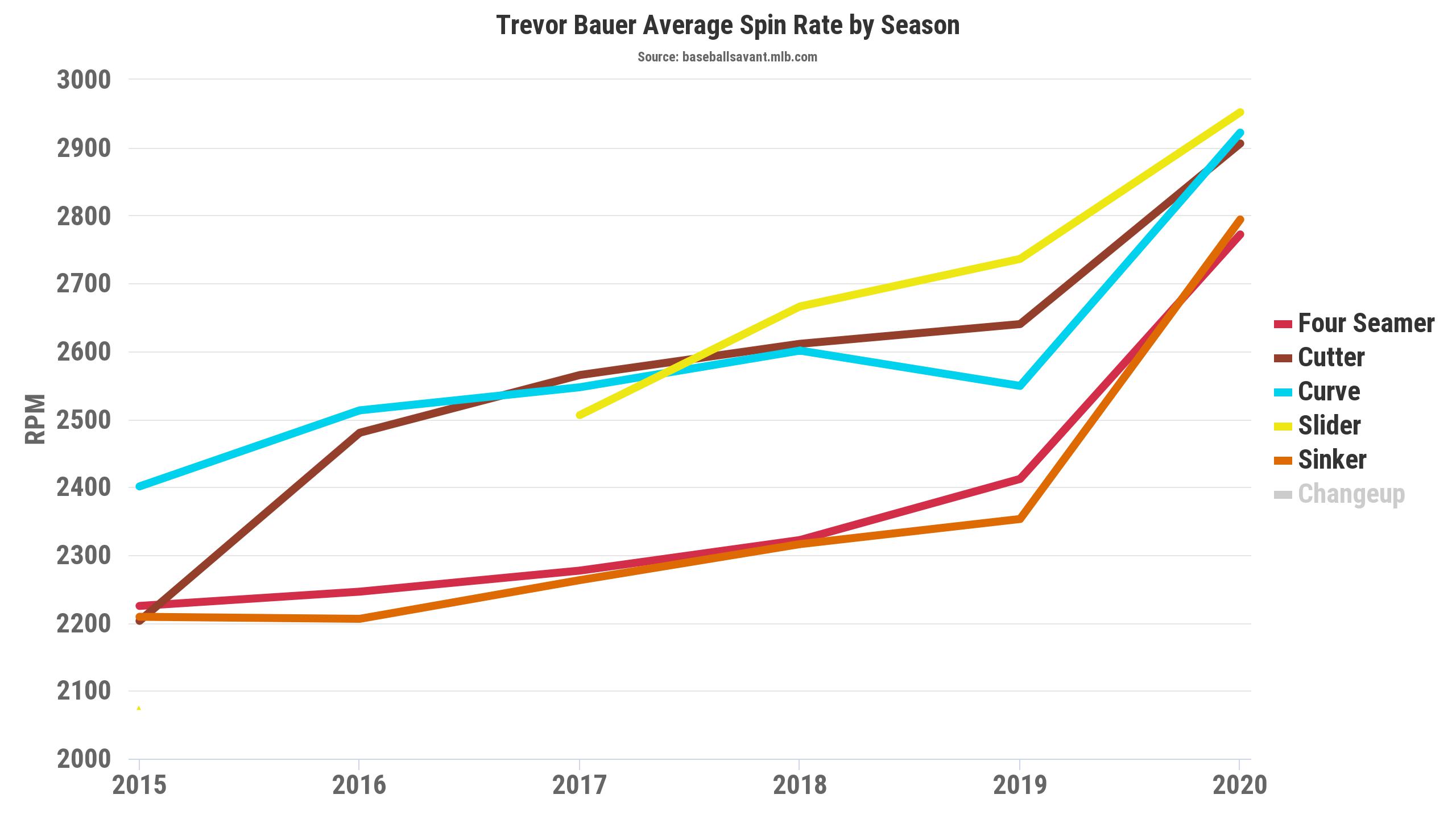 Bauer’s increase in spin actually began last September. How he’s added so much spin all of a sudden is unclear. He’s previously stated that he could gain significant spin by using pine tar or another sticky substance and indirectly accused Astros pitchers — specifically Gerrit Cole — of doing so. Whether he’s started using pine tar or not, it’s working.

Bauer is getting more spin on his four-seam fastball than any pitcher in the game aside from teammate Lucas Sims. He’s also second in spin rate on his cutter, fifth on his slider, and 24th on his curveball. Spin is especially important for a fastball and curveball. It keeps the fastball from dropping as much, eliciting swings underneath the ball. A high-spin curveball will have more movement. For Bauer, his slider spin rate is also huge because he throws it with side spin instead of gyro spin (i.e., the movement of a football). Side spin leads to horizontal movement, while gyro spin does not lead to movement. A pitch with gyro spin is said to have a low spin efficiency. Only three pitchers have a higher spin efficiency on their sliders than Bauer. Sonny Gray, for the record, ranks sixth.

Given his propensity for spinning the ball, it should come as no surprise that Bauer is among the league leaders in pitch movement for his four-seamer, curveball, and slider. Statcast measures the raw movement of every pitch and compares it to the “average” pitch within 2 mph in velocity and 0.5 feet of extension and release.

Here’s how Bauer ranks among all MLB pitchers on his fastball, curveball, slider, and cutter: 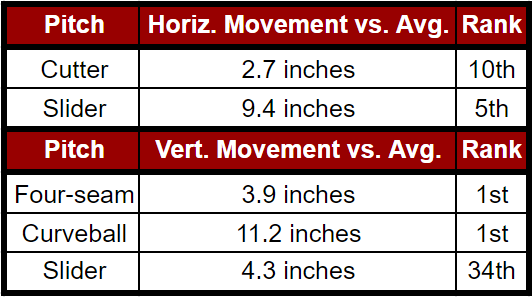 Nasty stuff is one thing, but Bauer is also commanding the ball much better than he did in 2019. His 6.8% walk rate is currently a career low, and he’s done a much better job of keeping the ball on the edges of the strike zone instead of over the middle. No pitch better exemplifies this than his four-seam fastball.

He throws the four-seamer 42% of the time, so he needs it to be sharp to have success. All of his wicked secondary pitches that draw the oohs and aahs play off the heater. Last year, the four-seamer got knocked around — in fact, of the 34 home runs he allowed, 20 came on the fastball. Although he’s throwing it nearly 1 mph slower (93.6 mph on average), it’s a vastly different story for the four-seam fastball in 2020:

It’s up for debate whether that level of dominance is sustainable for a full season when the league average four-seamer has been hit for a .261 average (.270 xBA), .475 slugging percentage (.505 xSLG), and .352 wOBA (.371 xwOBA). But Bauer’s four-seamer is no average fastball, and it’s also rare that a pitcher adds more than 300 rpm of spin from one season to the next.

With that additional spin, Bauer has a career-best 23.8% whiff rate on his four-seam fastball — the league average for a starting pitcher is currently 21.3%.

Despite allowing a 92.8 mph average exit velocity, he’s also getting low-quality contact on the pitch. Among pitchers with at least 25 four-seam fastballs put into play against them, only Danny Duffy has a higher pop-up rate than Bauer (21.7%). Mike Fiers and Kenta Maeda are the only qualified pitchers with a higher overall infield fly ball rate than Bauer (18.2%). This is another positive effect of a high-spin fastball; batters often swing underneath the ball, resulting in weak pop-ups and fly balls.

Besides the extra spin, how is Bauer getting more whiffs and pop-ups with his fastball? Throwing the ball up in the zone. 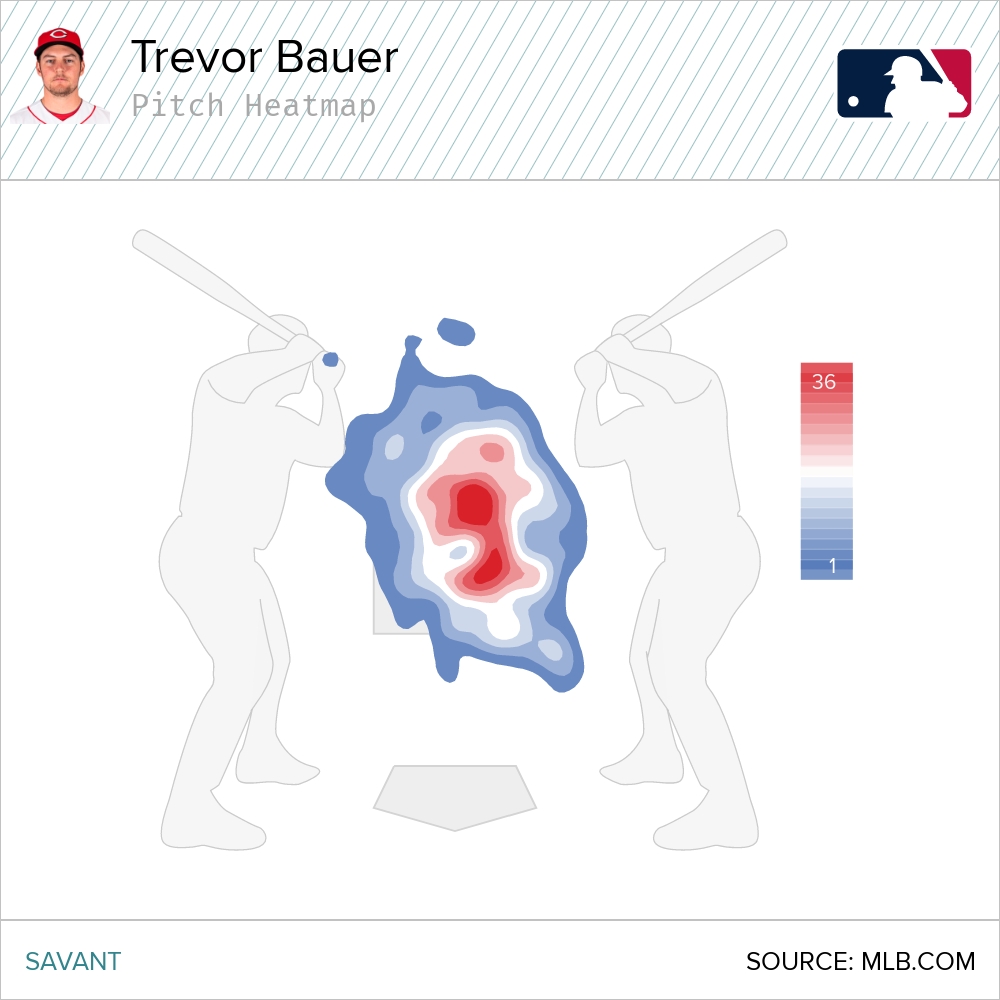 But clearly, as you can see from the heat map, Bauer isn’t throwing the fastball at the top of the zone exclusively. He’s also painting the corners better than he did in 2019. Bauer has hit the edge of the strike zone 46.5% of the time with his fastball compared to 44.5% last year, and 22% of his four-seamers have gone for called strikes — way up from 17.3% in 2019. Only Shane Bieber, Bauer’s former teammate and probable AL Cy Young winner, has more called third strikes on four-seam fastballs this year.

He’s doing it to both lefties and righties, as well. Case in point from his last start against the Pirates:

By establishing his fastball up and on the corners of the plate, he can tunnel his secondary pitches more effectively. And with their elite movement, it’s often lights out for the hitter.

Good luck trying to hit his curveball when it looks exactly like his fastball until the last second.

This cutter/slider also looks like a fastball headed for the outside corner before darting away at the last minute and prompting an ugly swing from Javier Baez.

Here’s another example with the fastball and slider overlayed:

It’s not just convenient cherry-picking of highlights, either. Bauer’s cutter, slider, and curveball have all benefited from better fastball command (and spin, of course). 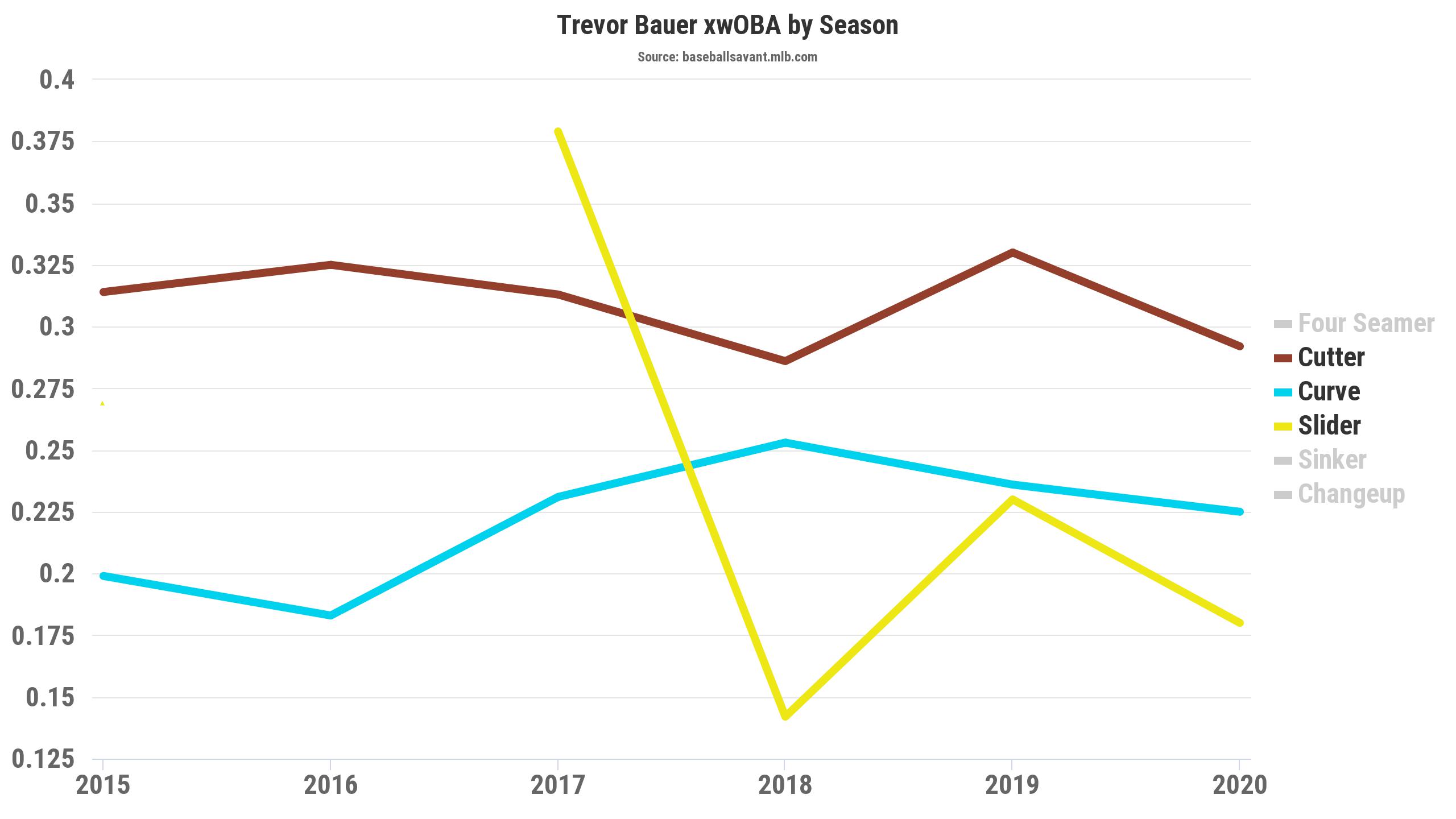 A healthy and motivated Bauer is as fun to watch as any pitcher in baseball, and the Reds wouldn’t be in the hunt for a playoff spot without his dominant season. He takes the mound tonight in another huge game against the White Sox in primetime.

Worry about whether he’ll re-sign with the Reds in the offseason. Right now, just enjoy a master class in pitching.

RC+ Preview: Disco, Reds look to bounce back vs. Cardinals

There’s times he almost makes it look easy. Amazing. Thanks for the great read !