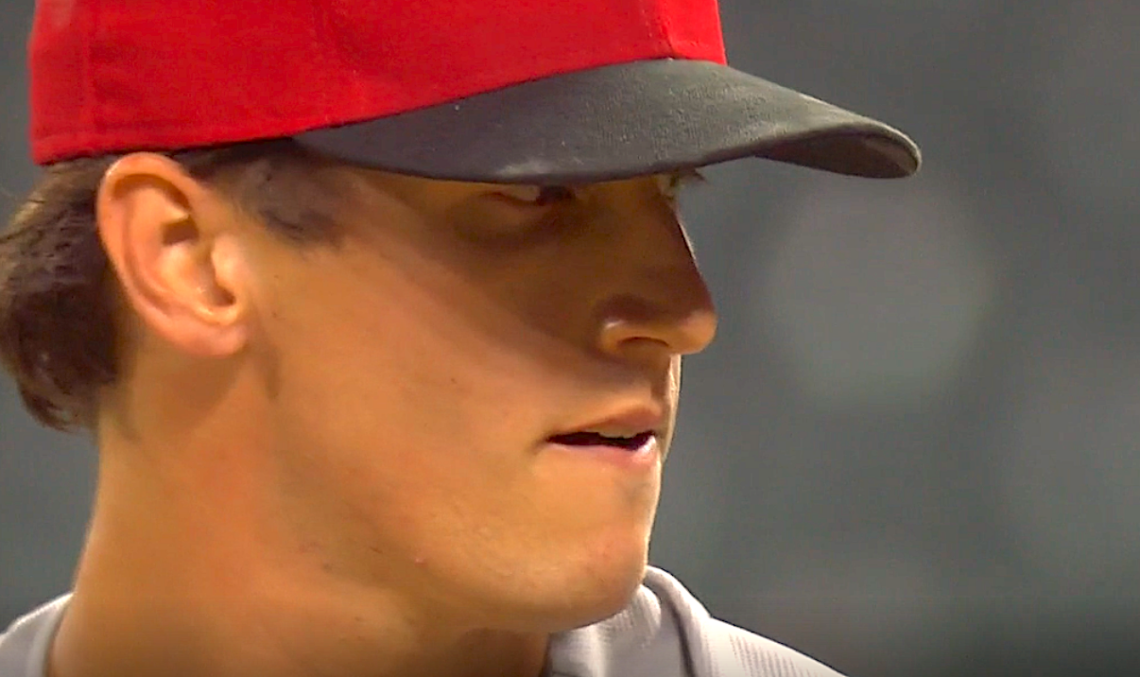 Let’s face it. The 2020 baseball season has been bleak for the Cincinnati Reds and the team’s fans.

But there have been encouraging individual performances, both the expected — Sonny Gray, Luis Castillo, Trevor Bauer — and surprising. Among the latter category would be Jesse Winker’s breakthrough, Tejay Antone’s out-of-nowhere arrival and Tyler Mahle’s jump-step progress (a surprise to those who pushed for Wade Miley).

Add to that list 26-year-old Lucas Sims, who has emerged as a dominant arm in the Reds bullpen. Amidst the gloom of this bizarre summer, let’s spend a moment appreciating one of the things that’s gone right.

The Reds didn’t draft Lucas Sims. They acquired him from Atlanta at the 2018 mid-season trade deadline when the club sent Adam Duvall to the Braves. Outfielder Preston Tucker and pitcher Matt Wisler were also part of the return for Duvall.

Sims had been a promising high school prospect. Atlanta made him a first-round pick (21st overall) in 2012 out of Snellville, Georgia. Sims worked his way through the Braves system and made a couple dozen starts for the big league club in 2017 and 2018. But by mid-2018, Atlanta’s system was pitching rich and Sims, well down the starting pitcher pecking order, was expendable. His last inning in a Braves uniform was against the Reds on June 25.

The Reds assigned Sims to a starting pitcher role as well. He made five appearances in 2018 and 16 in 2019 for the Louisville Bats, all as a starter. The Reds called up Sims for a doubleheader spot start last May. The right-hander was dazzling through seven shutout innings, striking out nine and walking one. The Reds brought Sims back to the big league club for good, as a reliever, toward the end of July.

The writers here have been high on Lucas Sims from the start. By mid-August 2019, we were referring to Sims as a solid member of the bullpen. Matt Wilkes wrote a long analytical post about Sims super-high spin rate on August 20. Matt Korte called attention to Sims’ elite status at inducing swings and misses this offseason. We’ve also thrown a spotlight on his too-high walk and fly-ball rates.

It is clear Sims is thriving under the instruction of David Bell’s pitching coaches. In October, we reported the huge gains in spin rate the reliever had made since leaving Atlanta. When a Braves fan on Twitter wondered why Sims hadn’t pitched “so well” for Atlanta, Sims himself replied: Cause the Reds actually care about making their pitchers great at what they’re good at.

Here’s the absurd pitch that provoked the Atlanta fan:

So what are the things Lucas Sims is good at that the Reds have helped make great?

48% of the pitches Lucas Sims throws are fastballs, four-seam fastballs. Sims’ average fastball velocity is 93.7 mph and tops out at 95.6 mph. The Major League average for relievers is 93.5 mph.

What separates Lucas Sims’ fastball is its spin rate. Sims is in the 99th percentile of pitchers when it comes to spin on his fastball. The ball revolves 18.5 times (backspin) from his hand to the plate.

With Atlanta and the previous Reds coaching staff, Sims fastball spin rate was 2375 rpm. Last year, it jumped to 2641 rpm. In 2020, it has continued to increase, up to 2768 rpm. That’s the highest fastball spin rate among Major League pitchers (Trevor Bauer is #2 at 2763 rpm).

Backspin on a fastball prevents it from falling as quickly. The average fastball drops 15 inches on the way to the plate. Sims’ heater drops 12.2 inches. Out of 400 Major League pitchers, Sims ranks #13 on that metric.

2.8 inches may not sound like much until you consider the diameter of an official MLB baseball is less than 3 inches. When batters swing expecting the ball to be in one place based on the habits of a lifetime and the ball is actually 2.8 inches higher it produces a swing and miss or a popup.

Sims magnifies this advantage by pitching up in the zone, particularly with two strikes. 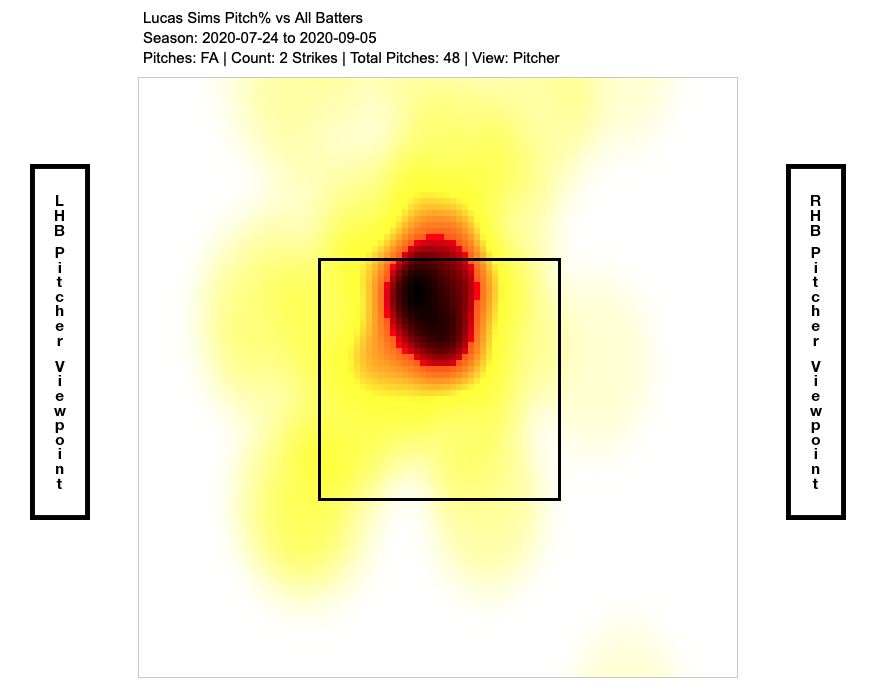 Sims induces swing and miss on his four-seam fastball at a rate 50% higher than league average. Here’s an example.

A fastball that stays up longer than batters expect also causes popups. The average pitcher induces popups in 10% of balls put in play. Sims’ rate is more than double that. Here are a couple examples.

When Lucas Sims isn’t deploying his fastball he’s usually throwing a curve. This season, the curveball comprises 36% of his portfolio. That’s up 10% from last year. Again, the remarkable characteristic of Sims curve is the spin rate, where he ranks in the 99th percentile. It revolves 25.3 times from hand to plate.

With Atlanta and the Reds previous coaching staff, Sims curve spin rate was 2828 rpm. Last year with the Reds it rose to 3120 and this season it has continued to increase to 3275 rpm. That’s the second-highest spin rate in the Majors, behind only Garrett Richards (3302 rpm).

Here is Sims using his curveball to strike out a left-handed batter.

Same result with a right-handed hitter.

Should the Reds consider moving Sims back to a starting role?

Like all the Reds strong relievers, Lucas Sims has an extensive background as a starter. Amir Garrett, Michael Lorenzen, Robert Stephenson and Archie Bradley were all developed for the rotation. Raisel Iglesias was the Reds Opening Day starter in 2016.

The case for making Sims a starter is the same as it is for any good reliever. Math and value. Relievers pitch 65 innings in a regular 162 game season while starters pitch 180-200. Sims has pitched only 16.2 innings this season, while Reds starters have thrown in the neighborhood of 40. Relievers can’t provide as much value as starters when they pitch a third of the innings.

Shouldn’t organizations play their best players as often as possible?

The idea of 180 innings of this Lucas Sims must tempt the Reds front office.

Not so fast. It’s possible that Sims (and Garrett, Lorenzen, etc.) has become the pitcher he is because of the move to the bullpen. That switch coincided with, if not caused, the consolidation of his pitch portfolio and put a focus on his two key pitches.

Sims made this comment in an interview with Mark Sheldon a few weeks ago: “When I was with Atlanta, I was trying to mentally will my way in games without my best stuff. I was doing a cutter and sinker and my breaking ball was not very good. I was just trying to find ways to go out there and compete. Now, it’s more just going back to what I did in high school: throwing fastballs and breaking balls and the occasional changeup. That’s always been my strength.” (Mark Sheldon, MLB.com)

That portfolio — a fastball, a breaking ball and the occasional changeup — sounds more like a reliever than a starter.

Making Lucas Sims great at what he’s good at

The Reds acquired Lucas Sims a few months before David Bell became manager and Derek Johnson the pitching coach. Starting with the 2019 season, something clicked between Johnson, his staff and Sims. In short time, their work together has produced an outstanding pitcher.

When you look at suppressing overall run production (xwOBA), Lucas Sims ranks in the top 98 percentile of major league pitchers. As a clear measure of his 2020 dominance, batters have swung at 119 of Sims pitches and missed 42 times. That whiff rate of 35.3% dwarfs the league average of 25%.

Not only is Sims valuable, but he’s just at the start of his Major League career. Under the current Collective Bargaining Agreement, the Reds have Sims’ rights through the 2024 season. Sims isn’t even eligible for arbitration until 2022.

The list of bright spots for the 2020 Reds is a short one.

The ascendence of Lucas Sims as a dominating reliever is on it.

Nice read, thanks for this. Hope Sims can keep it up.

I never know how much stock to put into the phrase “change of scenery” helping a player, but sounds like it worked out great for him. … The change has helped Duvall quite a bit too, amazingly !!