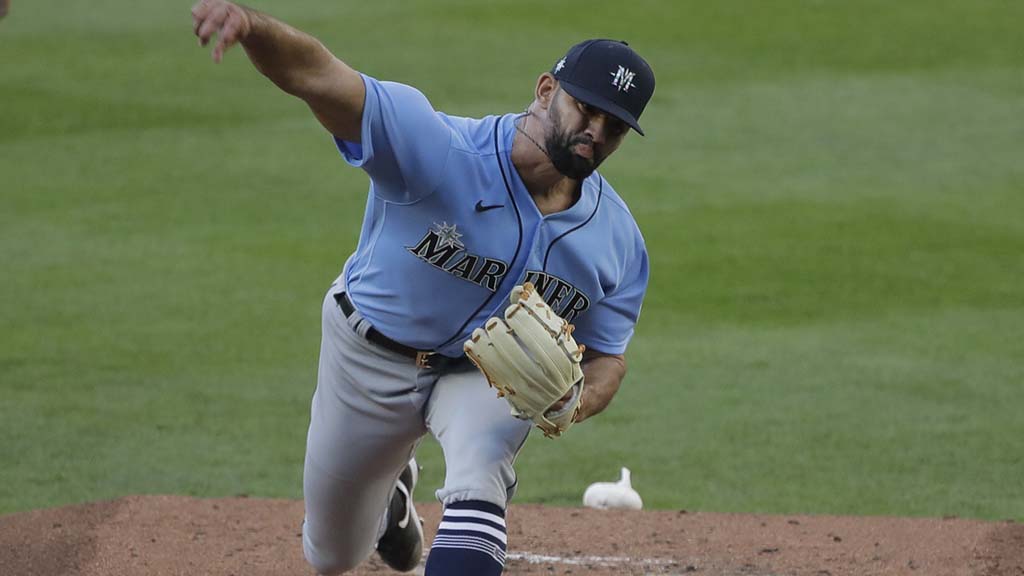 In what was no more than the second-most important news item on Wednesday, the Reds completed a trade with the Texas Rangers to acquire pitcher Art Warren. For their part, the Rangers received an undisclosed amount of “cash considerations.”

(I’m not sure what the difference is, if there’s any, between cash considerations and just plain old cash. “Cash considerations” is probably a focus-group driven phrase designed to splash eyewash so fans won’t think it’s just about money. Ha.)

Either way, the deal didn’t cost the Reds any players. So what did the hometown club get for their cash considerations?

Art Warren is a 27-year-old right-handed pitcher. Warren went to Napoleon high school, in a small Ohio town between Toledo and Fort Wayne, about 25 miles west of Bowling Green. He was born in Stryker, OH, a few miles northwest of Napoleon.

Warren’s college career began at the University of Cincinnati, where he appeared in 25 games between the 2012 and 2013 seasons. Two of those games he was the starting pitcher. The rest of his appearances were out of the bullpen. Warren transferred to Ashland University where he red-shirted for the Golden Eagles in 2014 while rehabbing from Tommy John surgery. Warren appeared in three games (12.1 IP) for Ashland in his junior year in 2015 before being selected in the 23rd round by the Seattle Mariners in the 2015 draft.

That line raised enough eyebrows in the Mariners front office that Warren was promoted to the big league club in September 2019. He debuted against the Reds on September 12, pitching the 8th inning, entering the game with two outs. Warren walked Sad-September Aristides Aquino and gave up a single to Freddy Galvis before inducing a fly out from Phil Ervin.

Warren made five more appearances in 2019, all out of the bullpen. Over 5.1 innings, he struck out five, walked two and gave up a couple hits.

If 2020 had been a normal season, Warren would have likely spent the year at AAA, a level where he’s still never pitched. Instead, Warren spent the 2020 season at the Mariners Alternate Site before being placed on waivers (a surprise to some) after the season. Texas claimed Warren from the Mariners on October 21. The Rangers designated Warren for assignment on December 26. Now he’s on the Reds 40-man roster.

In his brief MLB stint in 2019, Art Warren was a two-pitch pitcher. Warren used a four-seam fastball and slider each about half of his 87 pitches. He threw two curveballs, a pitch that scouts had highlighted earlier in his career.

Four-seam Fastball Warren’s average fastball velocity was 95 mph. Scouts said Warren caught their eye after his move to the bullpen boosted his FBv into the upper 90s. In 2020, it had a relatively low spin rate (2202 rpm) which puts it in the “sinks more than average” category instead of the “sinks less than average” category of high fastball spin pitchers like Tejay Antone, Michael Lorenzen and Lucas Sims. Amir Garrett and Luis Castillo are examples of successful pitchers at the lower end of the fastball spin rate.

Warren’s fastball didn’t show much swing-and-miss against major league hitters. He threw it 34 times and recorded just one whiff, on this well located heater to Aquino.

One odd bit of data from Warren’s brief stint with the Mariners. His fastball velocity dropped quite a bit through the month of September. While it’s not unusual for a pitcher to have a high mph in his amped-up major league debut, Warren threw several four-seamers recorded in the 91-92 mph range in his final appearance. It’s probably nothing. Probably. 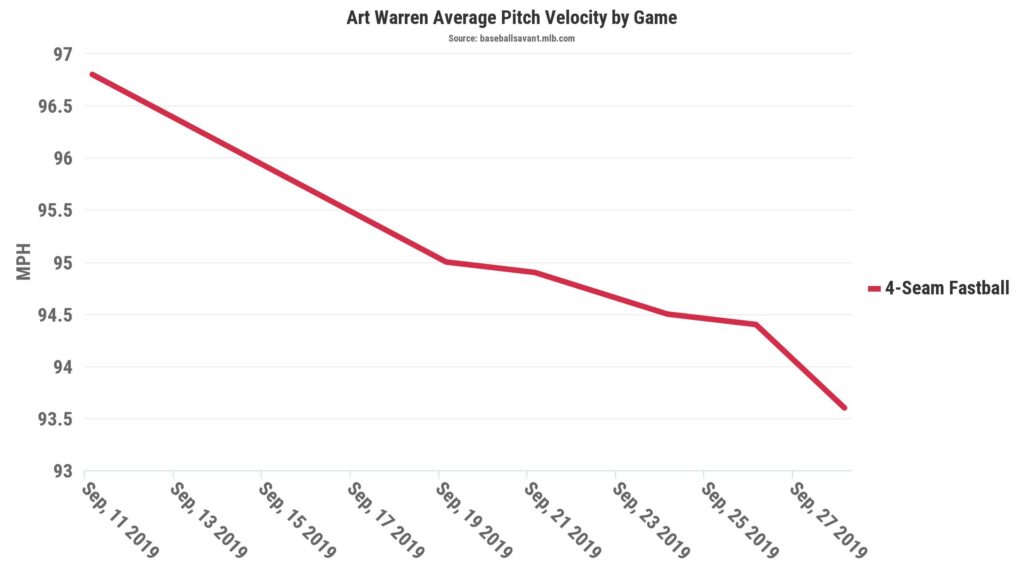 Here’s the slider Warren threw on his first major league pitch. Note the downward tilt. Warren’s slider breaks mostly up-and-down, not to the side.

Warren will throw the pitch on any count. Here he gets the Orioles’ Chris Davis looking on a 3-2 slider.

Where Warren Fits with the Reds

Warren’s homecoming story makes for a nice narrative, but his two years pitching in Cincinnati for the Bearcats were a bust that the pitcher remedied by transferring to Division II. At Ashland, he missed a season with Tommy John, then threw just 12 innings in 2015. It’s hard to figure on what basis the Mariners drafted him, but it sure wasn’t his college performance. I guess the 23rd round is a crapshoot, so why not take the 6’3″ pitcher who throws 95 mph?

Warren did develop as he moved through the Mariners system. (Although this is not one of those times where you would consider using the term “rocketed” as in “as he rocketed through the Mariners system.”) Warren’s strikeout and walk rate were excellent in 2019 at the AA level. A rash of injuries on Seattle’s major league club led to his call-up in mid-September that year.

But in 2020, the Mariners didn’t see fit to give Warren more major league experience. They called him up for one day in August, when the club was 7-18. But sent him back to their Alternate Training Site without having him pitch, in the process using up one of Warren’s options. Then they put him on waivers because they didn’t want him on their 40-man roster. The Rangers reached the same conclusion a couple months later.

The sample size (5.1 IP) on Art Warren’s time in the major leagues is too small to be an indicator of anything. Warren is down to two pitches, so the bullpen is his destiny. His record and experience should ticket Warren for the Louisville Bats relief corps in 2021. He’ll turn 28 before Opening Day.

If you’re searching for positives, acquiring Art Warren was costless for the Reds. They didn’t give up any players, just an undisclosed bit of cash consideration. Warren has two options left, which means the Reds can move him between the majors and minors, something Nick Krall mentioned as a positive earlier in the offseason. Warren has such little major league service time, he’ll pitch for the league minimum salary if he makes the team. And this is where we pay obligatory credit to the Reds pitching gurus. We wave our hands all around and speak in hushed tones about fixing Warren. Of course, there’s his frame, a 95-mph fastball and downward breaking slider to work with — maybe tools that could produce an above average ground-ball rate.

Back in the real world, it tells you everything you need to know about the Reds offseason and roster that the club is using up a 40-man spot on a soon-to-be-28 relief pitcher with no meaningful major league track record. On a guy who has already been cut by two teams that didn’t make the expanded 2020 postseason. My guess is in the next few months, the Reds will try to move Warren off the 40-man roster and expose him to waivers like the Mariners and Rangers did.