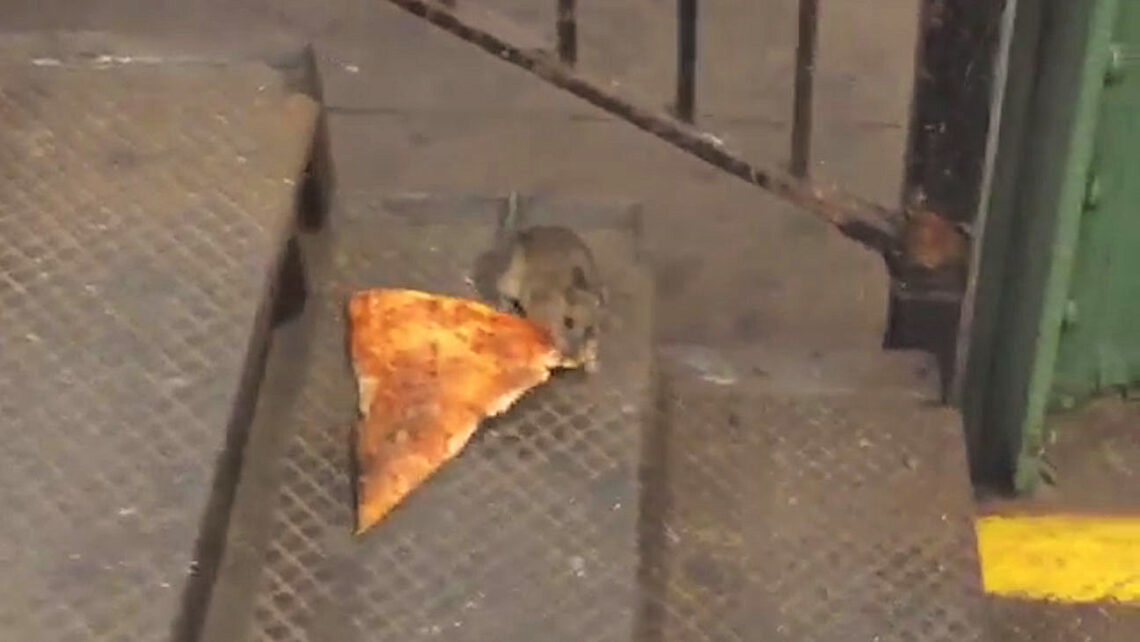 Lily Tomlin tells a short joke about the rat race. It ends with her observation that whether you win or lose, you’re still a rat. I’ll confess a certain temptation to borrow a version of her punchline to help describe the current state of offseason affairs in the NL Central.

But it doesn’t exactly fit. You see, some team in the division has to finish with the best record. And that accomplishment, no matter how dubious, is rewarded with a trip to MLB’s postseason. That team’s fans will proudly carry that championship banner.

So it’s worth asking: Could the Reds “win” the NL Central even while jettisoning the back end of their bullpen?

To answer that, let’s start with a little context. The outlook for MLB attendance in 2021 has improved over the silent turnstiles of 2020. But how much better remains clouded by doubts. We’re a couple weeks from the scheduled start of Spring Training and huge uncertainties remain:

Because of the financial ambiguity, baseball owners, like the Castellini family, have cut back on player payroll.

Yes, a handful of organizations — Boston, Toronto, San Diego, Washington — have boosted spending over their pre-pandemic 2020 plans. A few more clubs will move into that category as they sign the remaining headliner free agents, like Trevor Bauer and the nice shortstop trio. But most MLB clubs have moved toward austerity.

So far, the Reds’ NL Central competitors have chosen the “spend less” route:

Those are significant payroll reductions for all four teams, representing quite a race to the bottom.

The Reds have also cut payroll. Ownership ordered the front office to reduce spending to accommodate new acquisitions and then some. The Reds non-tendered Archie Bradley, Curt Casali and others. They traded Raisel Iglesias who, despite fan frustration born of negativity bias, was one of the best relievers in the game, simply to dump his salary. Trevor Bauer, Anthony DeSclafani and Freddy Galvis left for free agency.

Tugging payroll in the opposite direction are the Reds players still on the roster who are due raises in 2021. Those salary bumps come from signed contracts (Joey Votto, Eugenio Suarez, Nick Castellanos, etc.) or earned through arbitration eligibility (Luis Castillo, Jesse Winker, Michael Lorenzen, etc.).

The net impact  is the Reds baseline payroll has fallen from around $140+ million to $120 million. Here’s a breakdown of the current roster, including updated numbers for the arbitration-eligible players: 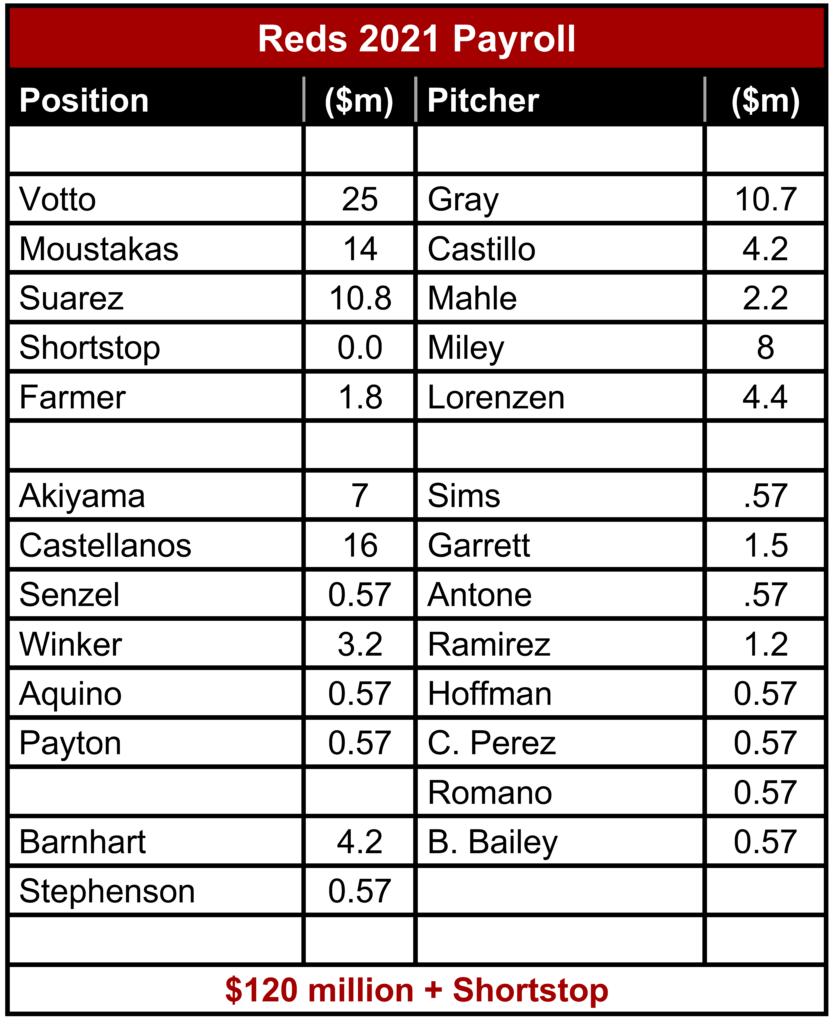 Those names are drawn from the Reds current 40-man roster. Many, like half the bullpen, are placeholders not predictions.

Notice that bottom number of $120 million comes with a shortstop-sized asterisk. The Reds need an everyday SS and are reported to be kicking the tires on free agents — Didi Gregorius, Andrelton Simmons, Marcus Semien — who would not be inexpensive. All three are projected to pull in more than $10 million in 2021.

The NL Central race to the bottom

So how does Reds payroll spending compare to the other NL Central teams?

The FanGraphs Roster Resource is an unparalleled one-stop source for MLB roster information. It tracks up-to-date, detailed depth charts and payroll for each club, offseason moves, free agent status and more. One snapshot of NL Central payroll this offseason comes from the FRR salary data from 2019-2021. For 2019 and 2020, it uses end-of-year salary. For 2021, it uses the FRR baseline projection, with a slight tweak to the Reds number. More on that in a second. 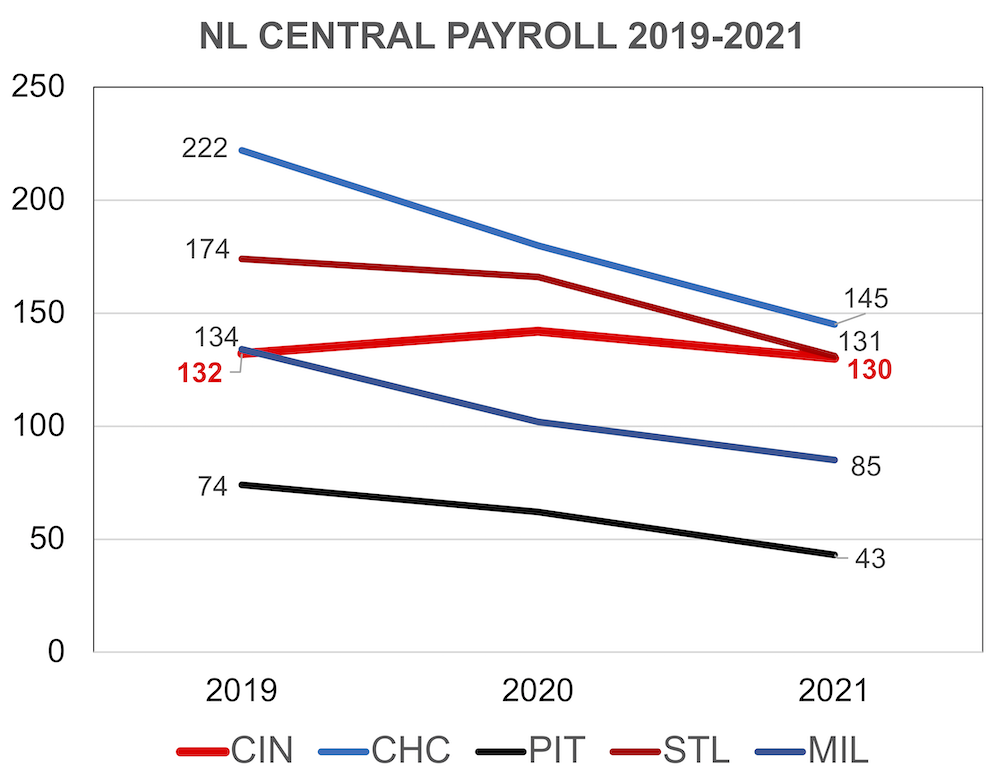 The NL Central race to the bottom had begun in 2020. The Cubs, Brewers and Pirates all had cut payroll compared to 2019. The Cardinals had reduced spending, but only by a bit. The Reds were the only NL Central team in 2020 to buck the trend by raising payroll.

The FRR 2021 number for each organization assumes the club’s current roster. If a club adds payroll through trade or free agent signings, that would change the graph. Same if they cut their spending further.

For the Reds 2021 number, I’ve added a $10 million shortstop to the $120 million baseline from the previous section. That’s unlikely to be where they end up, though. The shortstop may cost more or less than $10 million. The front office may cut more payroll by trading Sonny Gray or Eugenio Suarez. It may add more payroll by bargain shopping relievers or bench players.

The same variance exists for all the NL Central teams. This is a snapshot, not a forecast.

As Reds fans, we pay extra-close attention to our home town front office. We judge its moves against the club’s history, ownership promises and our dare-to-dream hopes. This offseason, we also have to take into account the unexpected, significant and ongoing impact of the pandemic.

With soaring income from a variety of sources, the financial health of Major League Baseball had been quite rosy prior to the pandemic. The Reds had been full participants in that rising tide of revenue and profits. While we expect the sport to regain altitude once the COVID risk subsides, it’s unclear what toll the virus will take on payroll spending in the short term, meaning 2021.

Dick Williams had a plan. After a half-decade of frustration with a stumbling rebuild and fumbling the development of pitchers in-house, he switched gears and built the Reds the old-fashioned way. By spending the owner’s money and shipping prospects. Williams began in 2019 with the acquisitions of Sonny Gray and Trevor Bauer. In 2020, the Reds pocketbook opened further covering $160+ million in free agent spending on three hitters and Wade Miley. Player payroll was headed to record levels.

The idea was to parlay that roster into a crowd-drawing pennant run. With cash reaped from success-thirsty Reds fans and a revenue-boosting trip to the postseason, Reds ownership would have new resources to add further payroll. Maybe even compete for Trevor Bauer.

That’s where comparing the change in Reds 2021 payroll to the rest of the division can provide helpful context. Projected spending in the NL Central in 2021 is down to just 72.5% of what it was two years ago. A significant segment of baseball owners appears hesitant to hit the reset button and return to pre-pandemic business as usual just yet.

By contrast, if the Reds are done shedding payroll and if they pick up one of the $10+ million free agent shortstops and a handful of cheap bench/bullpen players, the club could end up spending $135-140 million, just a bit below what they had planned in 2020.

That’s a big IF, of course. Actually, two big IFs.

Look, it’s easy to view Reds penny pinching as retrenchment. But that could be misreading the situation. We should be careful to not assume too much about what transpires this offseason.

Reds ownership is moving through a transition from one generation to the next. It’s impossible to rule out big change in the club’s management, for better or worse. But that’s not what this is. Like every major league organization, an unforeseen circumstance forced the Reds to regroup, at least for the moment. Analysts have made the point that the 2020 baseball season was an aberration and should be looked at as such. Rightly so. But we’re also not all the way through the blip.

That said, the Reds are holding their own in the downward payroll spiral of the NL Central. If they end up at the top of the 2021 standings, I will celebrate it. Look for me among the other Reds fans clutching that championship like, well, one of Lily Tomlin’s rats dragging a slice onto a subway.

Reds still boast a strong rotation and an offense that will surely be better than last year. In the NL Central, I like our chances. The taste of the playoffs, even if a little bitter after not scoring in two games, may have whetted the appetites for more postseason fun!

kmartin
Reply to  Randall A Gilmore

Randall, I am curious about why you think the offense “will surely be better than last year.” I think Akiyama, Votto and Moustakas are past their prime. Winker is a good but not great hitter. Senzel is perpetually injured. I would love to see some logic to make me optimistic about the offense.