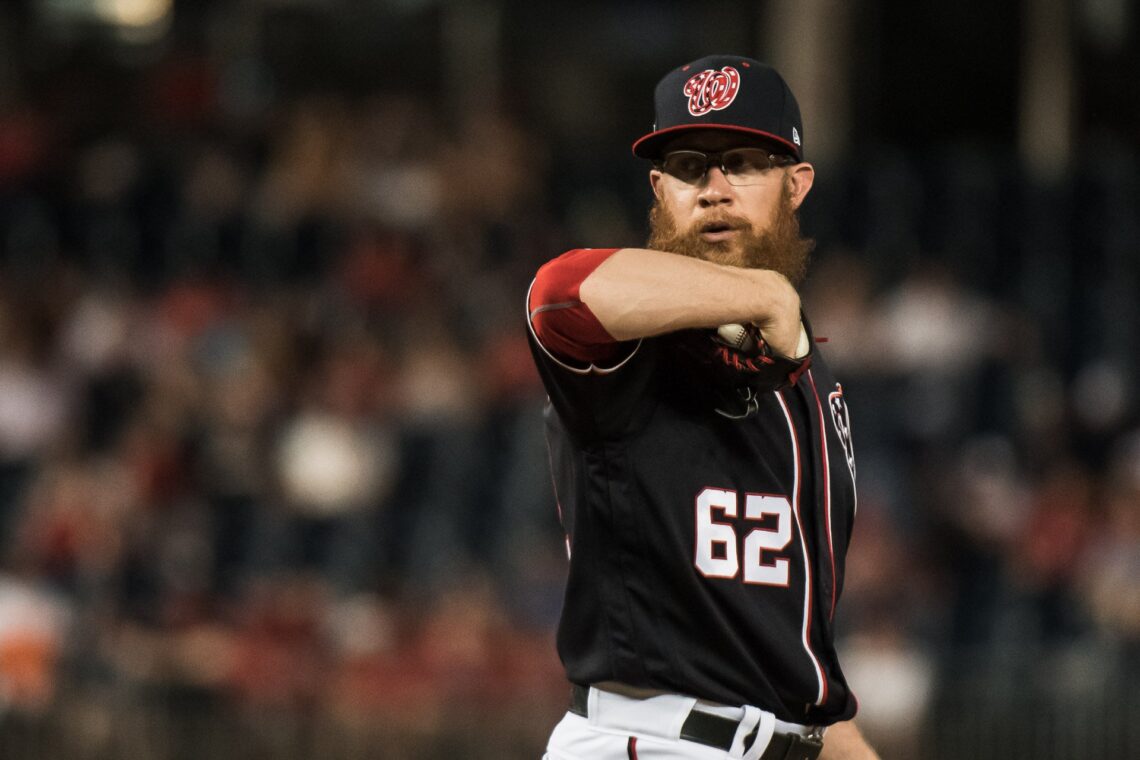 Sean Doolittle's one-year contract with the #Reds has a salary of $1.5 million, plus performance bonuses, source says. @MLB @MLBNetwork

Doolittle is a nine-year major league veteran reliever having split his service time between the Oakland A’s and Washington Nationals. He turned 34 in September. Doolittle closed for parts of three years (2017-2019) for the Nationals, including for their 2018 World Series championship team. Doolittle was chosen for the AL All-Star team in 2014 and the NL team in 2018.

Doolittle gives David Bell another left-handed arm in the bullpen to go with Amir Garrett. The Reds also traded with the Astros for LHP Cionel Perez, who could be in that mix, too.

Doolittle’s strikeout rate was 30.9% and walk rate a glittering 4.8%. The only Reds pitcher who comes close to that is former reliever Raisel Iglesias, who since his shoulder forced him to the bullpen in 2016, had a 29% strikeout rate and 8% walk rate. None of the Reds regular pitchers in 2020 had a walk rate as low as 4.8% and Doolittle managed that for seven seasons.

From 2012-2018, only 77 relievers threw at least 300 innings. Think of the survivor’s bias for that group. They had to be relatively free of injuries and good enough to be allowed to pitch a bunch of innings over seven seasons. The names at the top of that list are Aroldis Chapman, Kenley Jansen, Craig Kimbrel and Andrew Miller. Out of that group of 77 elite relievers over seven seasons, Sean Doolittle ranked #6 in FIP, #14 in xFIP and #7 in SIERA.

At the most recent end of that stretch, 2017-2018, Doolittle’s xwOBA (composite of contact quality, strikeouts and walks) was .216, more than 100 points below league average.

It is indisputable that Sean Doolittle was great through the 2018 season. But that’s not the whole picture.

In 2019, Father Time started to gain on Sean Doolittle during his age-32 season. Doolittle pitched in 63 games (60 IP) for the Nats and saved 29. At a superficial level, his 4.05 ERA didn’t look bad. But remember, that stat is lousy in isolating how the pitcher himself actually pitched. From earlier:

“Earned Run Average (ERA) is an out-of-date way to evaluate pitchers. It does a terrible job in quantifying what it advertises by name — the number of runs earned against the pitcher. It ignores the role of defense, parks, scorers decisions, opponent lineup construction, bullpen effectiveness and just plain luck on balls in play. That said, it’s a common, public-facing stat. But with all the information we have one or two clicks away, it’s easy to do much better than ERA.”

Sean Doolittle’s 2019 season is one of many examples where ERA offers an extremely misleading evaluation. Take a look at how Doolittle’s performance collapsed from his 2017-2018 seasons to 2019:

Those numbers reflect dramatic decline in how he was pitching. All of them are far more indicative of his actual performance than his ERA.

A look under the hood at Doolittle’s pitch metrics exposes more of the drop-off. This graph shows the trend in Doolittle’s fastball velocity: 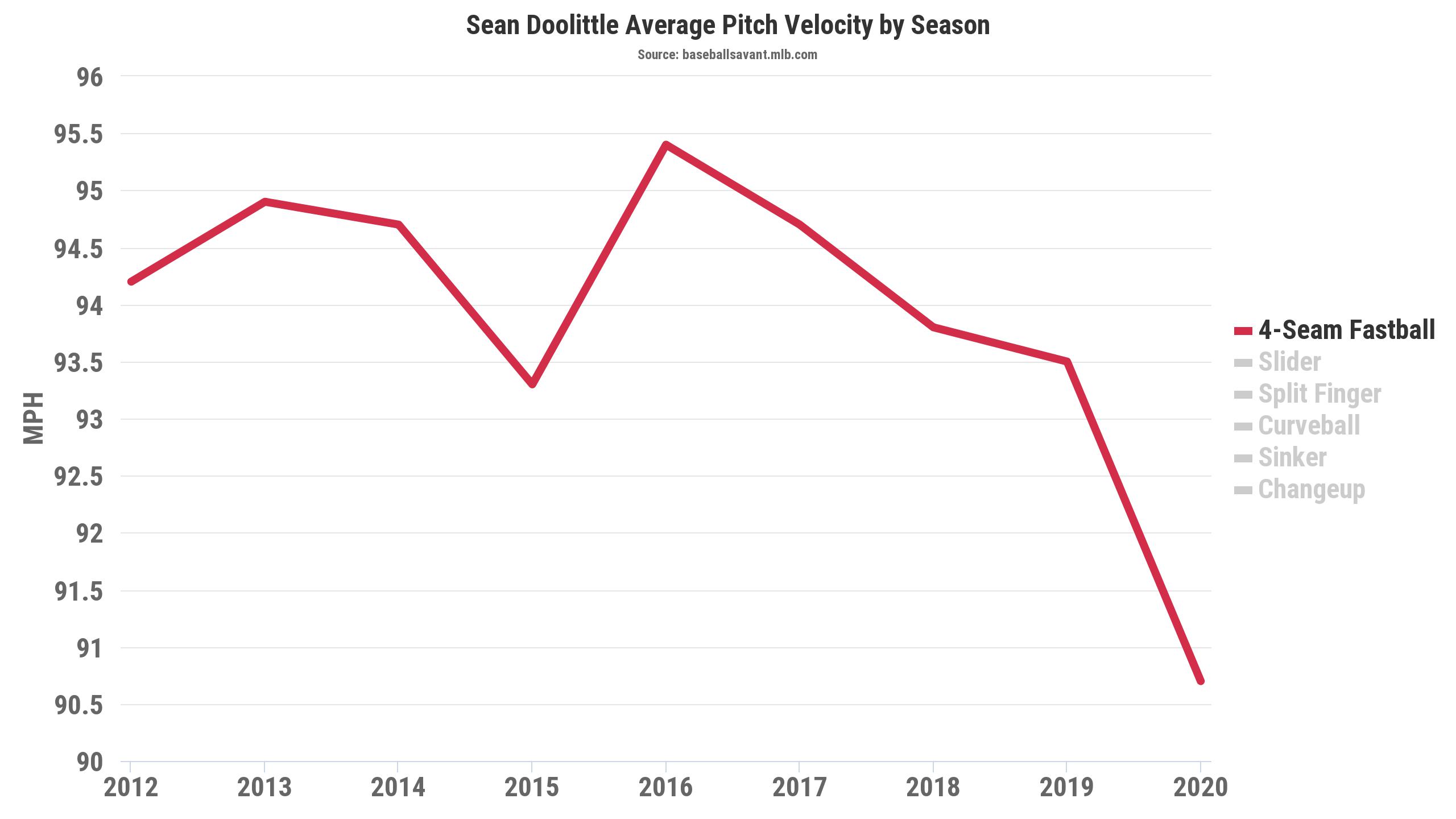 Not only is Doolittle’s fastball velocity down, but so is its horizontal and vertical movement. Beyond his heater, Doolittle’s slider isn’t sliding as much and his splitter isn’t splitting like it used to. That’s why hitters are whiffing on him less, squaring him up and hitting the ball harder. More contact and better contact is a bad combo for a pitcher.

The previous graph is the first time we’ve made any mention of Doolittle’s 2020 season. That’s because he only pitched 7.2 innings due to an oblique strain and right knee fatigue. Doolittle was also sidelined a bit in 2019 with tendonitis in his right knee. He missed time in 2018 with a strained big left toe. Doolittle battled shoulder injuries from 2015-2017, including a rotator cuff problem.

The reason for concern about Doolittle’s home run rate is he’s an extreme fly-ball pitcher. His GB% in 2019 was the third lowest among 158 qualified relief pitchers. As you would expect, his FB% was third highest. Pitchers try to avoid fly balls because unlike ground balls, they can become home runs. Nationals Park is the same dimensions as Great American Ball Park except near the lines, where GABP is up to 10 feet shorter.

Yes, pitchers with high fly-ball rates can defy the odds for a while. Tyler Mahle, for example, had a 29% GB% and 50% FB% in 2020, about 5 points better than Doolittle on each, but still toward the extreme fly-ball end. But the obvious and important difference between Mahle and Doolittle is their stuff. Mahle’s fastball has a velocity of 93.9 mph and spin rate of 2389 rpm. They combined to create new “upward” movement and harmless fly balls by design. [See: Tyler Mahle’s Revamped Fastball by Matt Wilkes from late September.] Even in Mahle’s case, he was lucky on home runs in the abbreviated 2020 season. His HR/FB and HR/9 rates were far below his career averages.

Sean Doolittle was an elite major league pitcher for more than a half-decade. But the 2019 and 2020 seasons present bright flashing signals warning about his future effectiveness.

Friend of the site, Doug Dennis, long-time writer for Baseball Headquarters, passed along this info from BHQ’s current scouting report on Doolittle:

“Doolittle struggled mightily between six trips to the IL in five years. He possesses a steady xBB%. But his skills are in free-fall as velocity tanked and Doolittle struggled with mechanics. History says 1) Doolittle can succeed despite health, and 2) He will miss time. Track record warrants late flyer to see if he can recover.”

Our Matt Wilkes summarized his thoughts about the signing:

“Flashy name, but Doolittle isn’t the pitcher he once was. Velocity down, spin and whiffs on his slider down. Has struggled to get RHH out the last two years. Part of it health-related, part of it age-related. Could be a fine addition if he’s healthy and gets some velo back. Reds only have three other LHP on the roster.”

Our Kyle Berger sees more of the upside with Doolittle, judging the reliever’s 2019 to be more positive based on a wide array of composite stats.

Beyond the numbers, you’ll see plenty of references to the “veteran presence” that Doolittle will provide. But signing free agent relievers is like throwing darts blindfolded. A few good months, like the Reds received from Jared Hughes and David Hernandez are about the best you can do. More common is the fate of Kevin Gregg, Burke Badenhop, Ross Ohlendorf, Zach Duke, Pedro Strop, Yovani Gallardo and Steve Delabar.

One Reds beat writer, Mark Sheldon, has written that the Reds signed Doolittle to take the team’s closer role. The lefty reliever has notched more than 100 Saves in his career. It’s unclear if Sheldon is making an assumption or reporting what he’s been told by someone with the club. But if the Reds are planing to use Doolittle as the closer, it’s a colossal misjudgment. Having said that, it wouldn’t be a surprise if Nick Krall or David Bell says that Doolittle is in the mix for the job, because why not?

My bottom line: It’s unrealistic to expect Sean Doolittle to regain his 2012-2018 form. If he does, the Reds will have struck gold. But much more likely is Doolittle struggles, and puts up numbers between his 2019 season and something worse, in which case he’s little to no help to the Reds. The best scenario that’s at all realistic is that Doolittle fights back to mid-way between his 2018 and 2019 performances. In that case, he could prove a valuable asset as a lefty in the Reds bullpen. At $1.5 million, the risk is low, as long as his veteran status doesn’t automatically confer his role and he ends up coming into the 8th inning on Opening Day against the Cardinals.