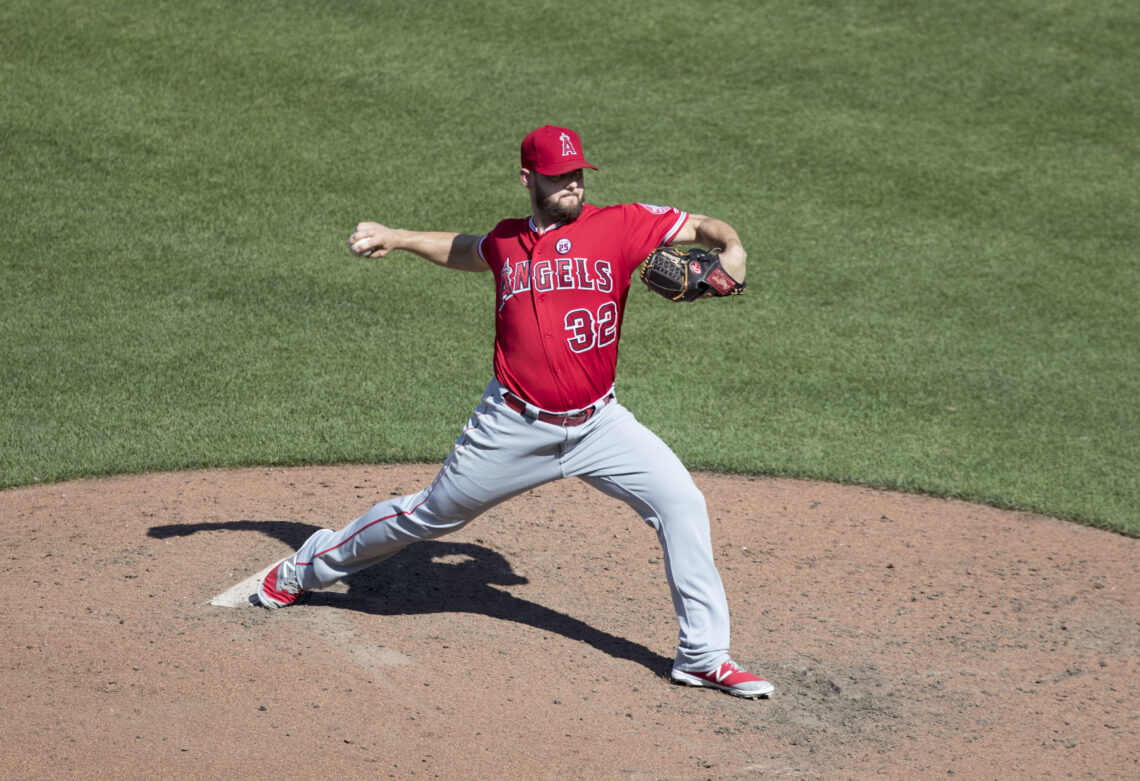 The Reds signed right-handed reliever Cam Bedrosian to a minor league contract this afternoon. He’s not on the 40-man roster but has been invited to spring training in Goodyear. If that last name sounds familiar, it’s because Bedrosian is the son of Steve Bedrosian, who pitched in the majors from 1981-1995, winning the Cy Young award as the Phillies closer in 1987.

Bedrosian (29) was selected by the LA Angels of Anaheim with their #1 pick (29th overall) in 2010. He had pitched for East Coweta High School, which is about 45 minutes southwest of Atlanta.

Cam Bedrosian started 21 games in lower-A ball but otherwise has been a reliever in the Angels system. He made his Big League debut and 16 other appearances in 2014 and split the 2015 season between AAA and the Angels. Bedrosian pitched for the Angels through the 2020 season.

At the conclusion of 2020, the Angels tried to send Bedrosian, who was out of options, back to AAA. He refused the assignment and became a free agent. He has 5+ years of service time and is eligible for a third year of arbitration. Bedrosian has earned $6.7 million from the Angels in his career, including $2.8 million in 2020.

Bedrosian did “start” seven games for the Angels in 2019, but it was in an opener role, usually for one inning. His highest pitch count in those starts was 22.

Bedrosian has hit the injured list a few times in his career:

The last of those is worth elaboration. The adductor (groin) muscle group is in the inner leg and attach to the pelvis. As a right-handed pitcher, Bedrosian’s right adductor would play a crucial role in back leg drive and power striding off the rubber. More on this later.

Bedrosian became a full-time major leaguer with two months left in the 2015 season. Through the first four months of 2016, he appeared to be on track to become a dominant closer for the Angels. He struck out 51 and walked 14 in 40 innings in a set-up role (2.13 FIP, 2.96 xFIP, 2.77 SIERA). But then Bedrosian was sidelined with the finger tendinitis and was later diagnosed with a right forearm blood clot, forcing him to miss August and September.

Bedrosian’s 2020 numbers come from a small sample (14.2 IP), so don’t read too much into them. He made four appearances the first week, used mainly when the Angels were behind. Then he missed the month of August with the adductor injury, returning on September 2. He pitched in seven games, always when the Angels were behind, usually by several runs.

Bedrosian throws a four-seam fastball about half the time and a slider the other half. He also has a splitter but barely uses it (~1% of the time). Early in his career, two-thirds of his pitches were fastballs, but he’s steadily increased his slider usage over the years. In 2019, he used his breaking ball a bit more than his heater.

The four-seamer possesses above-average spin (75th percentile) but its velocity has been declining for quite some time. It averaged 96.0 mph in 2016 and has dropped every year since, bottoming out at 92.2 mph last year. After returning from blood clot surgery in 2017, Bedrosian was still hitting about 95 mph. But then he hurt his groin early in 2017, and his velocity has never really returned. 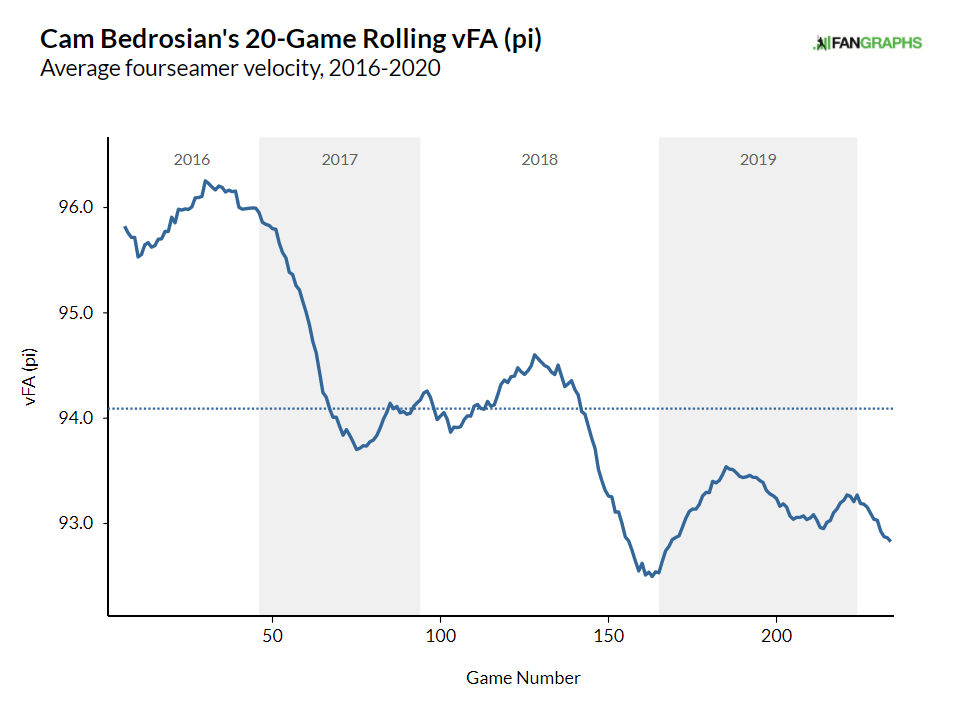 The lack of velocity has contributed to a poor whiff rate (17.1% for his career), well below the league average (about 20%). However, its spin is encouraging. Not only does it get above-average raw spin rate, but Bedrosian greatly increased its spin efficiency between 2019 (79%) and 2020 (92%) by using a more overhand arm angle. As a result, his vertical movement (rise) rose from 1.8 to 3.1 inches above average, tied with Lucas Sims for the fifth-best mark in baseball. That’s something the Reds can work with, even with diminished velocity, by having Bedrosian throw up in the zone more.

Bedrosian’s slider also brings some intrigue. The pitch has typically sat around 83 mph. It dropped by 2 mph in 2020, which potentially contributed to a career-worst 26.1% whiff rate and 22.2% chase rate. It’s important to remember, of course, that this was a small sample size and he dealt with injury.

Despite the lack of whiffs, though, Bedrosian still held hitters to a .263 xwOBA with the slider in 2020, right in line with his career mark and the league average. Why? It, too, gets above average spin (around the 72nd percentile) and elite vertical movement. In 2020, only two pitchers who threw at least 50 sliders got more drop vs. average. Here’s what it looks like:

Cam Bedrosian was an above-average — but not great — reliever from 2017-2019, the bulk of his MLB career. The Reds are hoping he returns to that form. If Bedrosian’s slippage in 2020 is related to lingering groin issues, and he can avoid a relapse, there’s a shot for him to once again be the pitcher he was up to 2019. With his spin rates and pitch movement profiles, the Reds’ coaching staff may be able to help Bedrosian unlock more potential in spite of the velocity concerns. Unlike many veteran relievers that get picked up as free agents, Bedrosian is on the younger side (29) and will pitch at that age through the 2021 season. He also has far more major-league experience than many of the other bullpen candidates the Reds have acquired during the offseason. If he’s healthy, there’s a decent shot he makes the Opening Day roster.

Nice analysis, Steve, thanks. I appreciate how you and the other writers at RC+ take the effort for an in-depth analysis of an acquisition such as this one when most others have nothing but dismissive complaints.