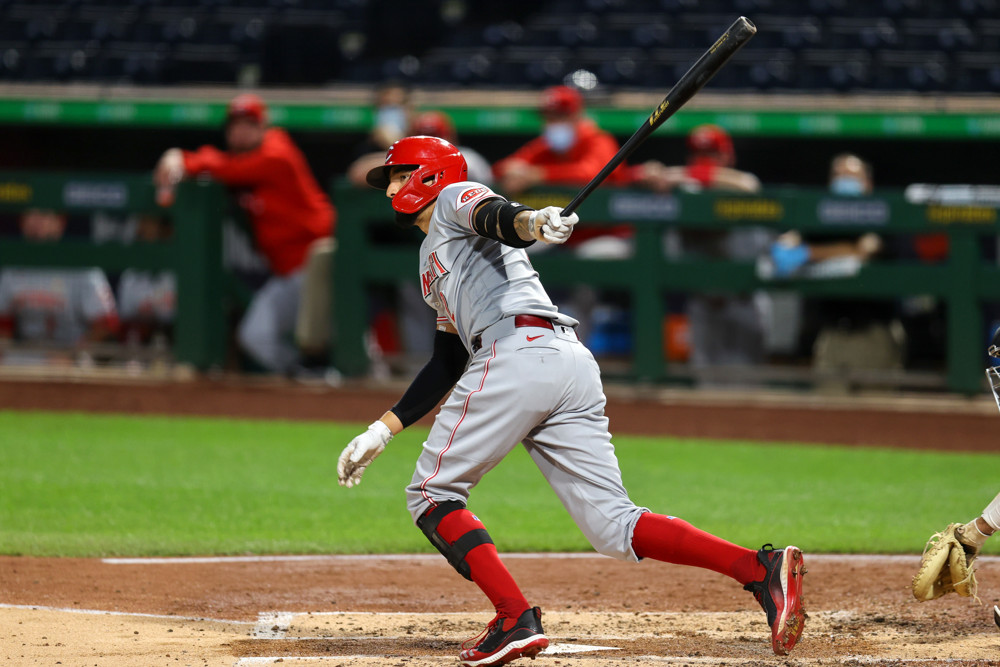 In January 2020, the Reds capped an offseason spending spree by signing right-fielder Nick Castellanos to a four-year, $64 million deal. A hot commodity after being one of the best second-half hitters in 2019, the team hoped that breakout would continue in Cincinnati.

Through the first two weeks of the season, it did. Castellanos started the year on a 12-game hitting streak, hitting .366/.447/.878 with six home runs. He looked like an MVP candidate. There was worried chatter in the Reds Twitterverse that he’d exercise his opt-out clause after the season.

But then he ran into a brick wall. Castellanos hit just .192/.262/.395 while striking out in nearly 30% of his remaining 195 plate appearances. The cold spell dragged his season slash line down to .225/.298/.486. His batting average and on-base percentage were career worsts. His slugging percentage and wRC+ (102) were his worst since 2015. His strikeout rate skyrocketed by seven percentage points to a career-worst 28.5%. Understandably, he decided not to opt of his contract.

Still, there was plenty to like about Castellanos’ season, even if the results weren’t what he or the Reds hoped for. He had a career-best 7.9% walk rate. He smoked 27 extra-base hits (11 doubles, 2 triple, 14 homers) to lead the team. He also blistered the ball and did so consistently.

Castellanos’ average exit velocity, which stayed around 88 mph throughout his career, was 91 mph in 2020. That put him in the 82nd percentile and trailed only Jesse Winker for the team lead. Nearly half of his batted balls (46.7%) were hit at 95+ mph, also a career best. His barrel rate (16.0%) was in the 92nd percentile. As a reminder of what constitutes a barrel from the RC+ stat glossary:

Given the growing prevalence of the shift, even against right-handed batters, it’s fair to wonder whether that hurt Castellanos. The results say it didn’t. Castellanos faced a shift more than ever in 2020 (66.8% of his plate appearances), but he actually fared better against those alignments (.371 wOBA) than against standard ones (.228).

There’s no doubt that Castellanos had some bad fortune. His batting average on balls in play (.257) was more than 70 points below his career mark (.329). On top of that, only nine hitters in baseball had more hard-hit outs (39). Nobody had more batted balls with a 50% or higher hit probability go for outs (25), and nobody had more barreled balls go for outs (9).

Oddly enough, though, this isn’t new for Castellanos. Since 2015, no hitter in baseball has more barreled outs — and it’s not particularly close. Castellanos has 80 such outs; the next closest player, Jose Abreu, is at 65. On one hand, it shows that Castellanos barrels the ball a lot. On the other, it seems like remarkably rotten luck.

Part of it is undoubtedly because he spent a large chunk of that time in Comerica Park, which has one of the largest outfields in baseball. Another part is that while Castellanos can certainly hit the ball at 95+ mph consistently, he doesn’t really have the extra gear that elite hitters do. 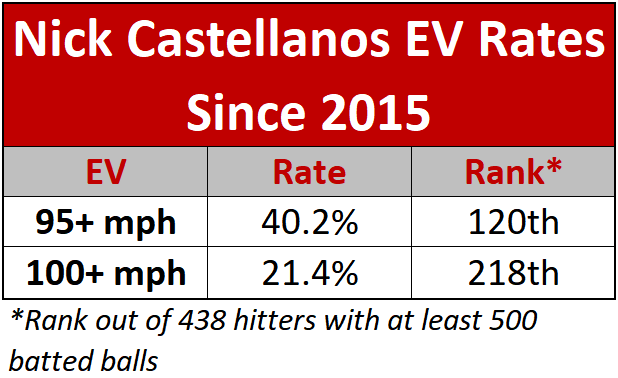 Considering he’s a line-drive hitter and many of his barreled outs have gone to center field, the largest part of a ballpark (particularly in Comerica), this starts to make a little more sense. Castellanos hit 44.5% of his batted balls straightaway in 2020, a career high and a huge increase from the previous two seasons (33.9% in 2018, 35.2% in 2019). Perhaps this helps explain the large discrepancy between his actual wOBA (.343) and expected wOBA (.370) since 2015 — only five hitters with at least 1,000 batted balls have a bigger negative gap.

This isn’t to say Castellanos is a bad hitter, just that he isn’t quite in that elite category — a conclusion that Justin Choi also arrived at when he also noticed this strange trend with Castellanos. Still, luck was clearly not on his side in 2020 either. Castellanos had a ridiculous 48-point gap between batting average (.225) and expected batting average (.273). Only two hitters with at least 100 batted balls last season had a larger gap (Carlos Santana and Eduardo Escobar). If he continues to hit the ball hard consistently — even if he’s not crushing balls at 115+ mph like Aaron Judge — better results should come in 2021 as positive regression should kick in.

The story doesn’t end with the quality of contact, though, as there’s an elephant in the room to address: strikeouts.

Clearly, he wasn’t just a little worse than average in these categories. He was significantly worse.

Castellanos has always been a free-swinger. He hasn’t walked much (career 6.5 BB%) and tends to chase a lot of pitches (34.8%). He’s often been susceptible to chasing a slider low and away. But he’d never had quite this level of swing and miss in his game. In particular, Castellanos uncharacteristically struggled to make contact against fastballs and off-speed pitches (mostly changeups). 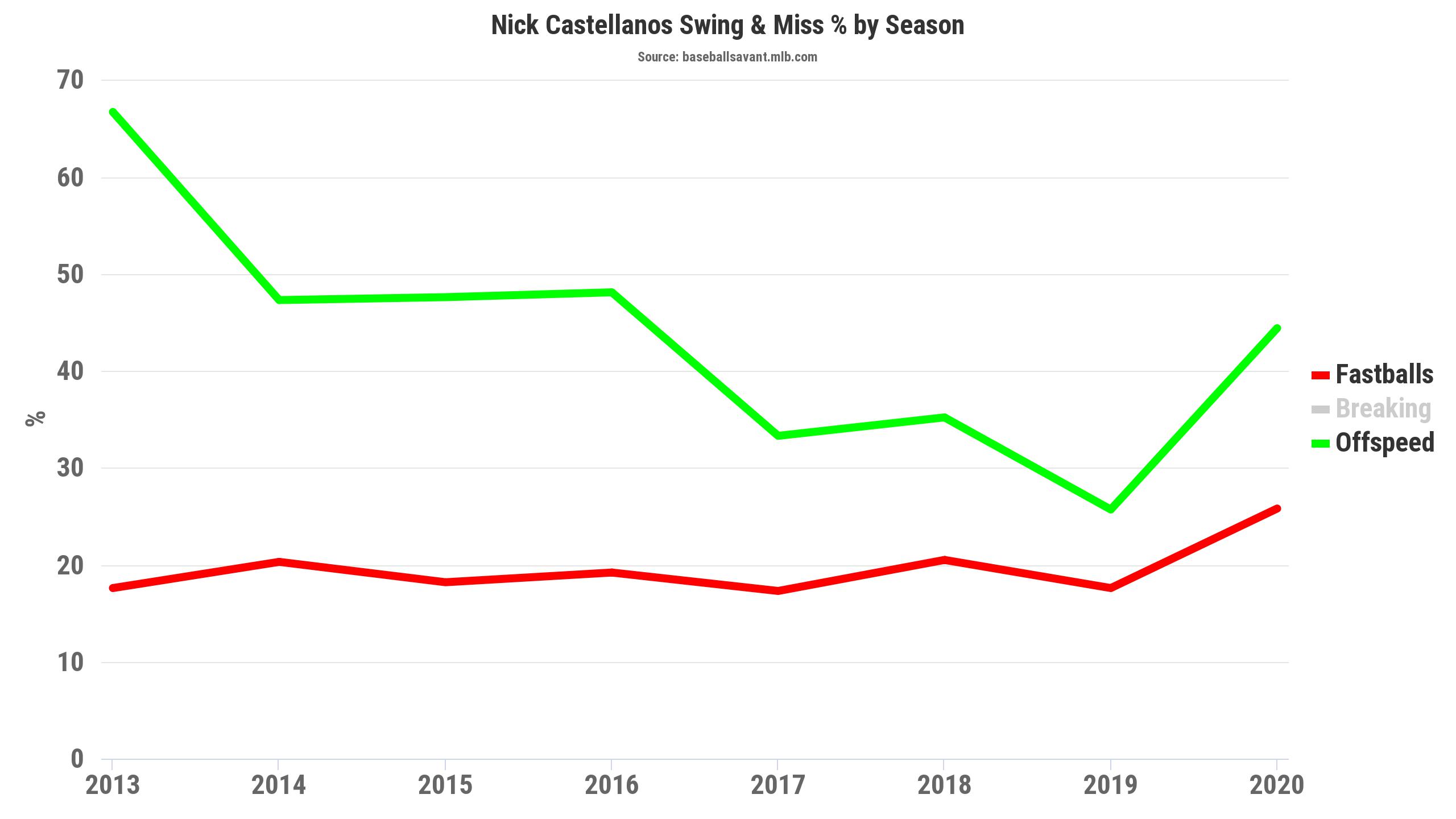 Chalk some of that up to a small 60-game sample.

But notably, Castellanos tinkered with his stance a lot in 2020, and this may have played a role.

He had a bit of bat movement, but he mostly stayed pretty quiet before the pitch. This was pretty consistent with both the Tigers and the Cubs.

He started the year with a stance similar to what he’d always used. Here he was on Opening Day:

Then, five games into the season, he introduced a bat wave toward the pitcher. It was far from a Gary Sheffield-esque stance, but it was a noticeable change.

After adopting the bat wave early in the season, Castellanos homered in five of seven games. When he started to cool off, though, he tinkered again. The wave came and went throughout the season, sometimes even disappearing and reappearing within the same game.

For example, his stance on August 20 looked much closer to his old one:

Three days later, the bat wave was back.

What can we make of this?

Was Castellanos continually tinkering with his stance due to the frustration of those hard hits not falling? Possibly.

As the chart below shows, strikeouts started to become a larger problem when the production began to dip and he decided to alter his stance. In one 10-games stretch, he struck out in more than 40% of his plate appearances. 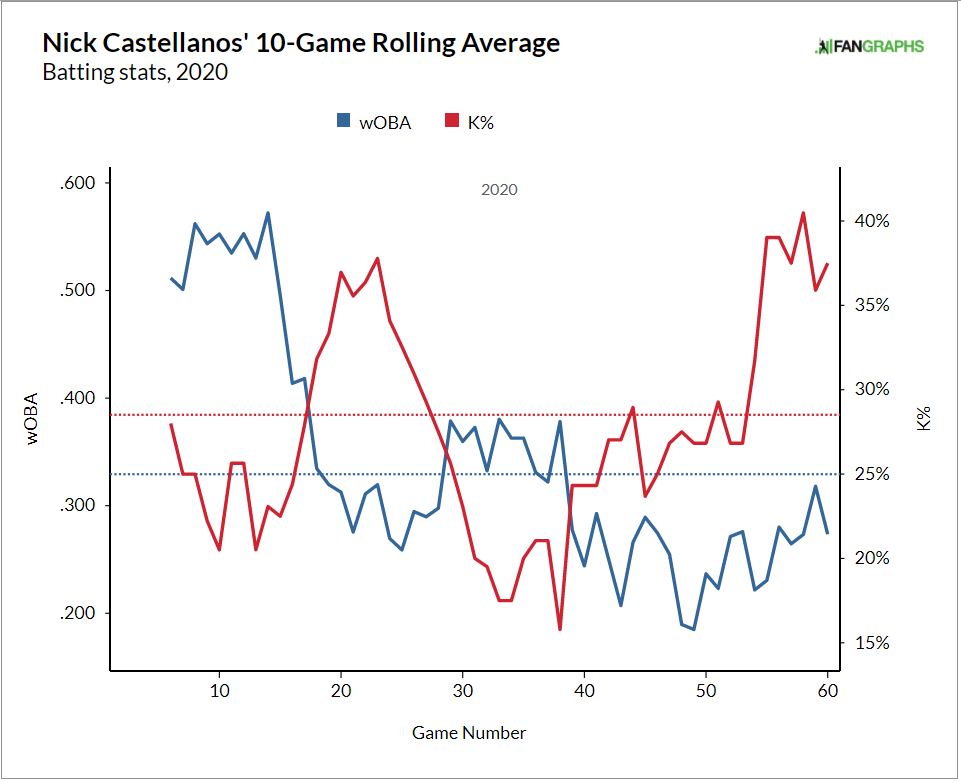 Was that extra pre-pitch bat movement contributing to more swings and misses? Was that movement preventing him from his hands in the proper position at times? Maybe, but that’s a conclusion we’d need a hitting coach to help make. From the outside, it’s hard to say with certainty. Hitters can succeed with different approaches and are constantly making adjustments throughout a season. But it could be one plausible explanation for his strikeouts.

In a recent spring training interview, Castellanos also admitted to pressing at the plate (quotes from MLB.com):

“Usually those little spells where nothing’s falling are easy to ignore, but then when you look up and you only have 17 games left, you know?” Castellanos said. “To say that I didn’t pay attention to it or I wanted to do really well? Or I tried to do too much? I’d be lying.”

“I’m sure if we had 162 games, man, my numbers would have been right where they normally are.”

Is this a foreboding warning sign about his strikeout rate moving forward? Probably not. The batting stance changes may have contributed. Maybe he was trying to sell out for power. If those potential contributing factors carry over into 2021, maybe he’ll continue to strike out at a higher-than-average rate. However, it’s hard to draw any meaningful conclusions from a 60-game sample. The larger sample, dating back multiple seasons and thousands of plate appearances, would say he’ll return to an average-ish strikeout rate in 2021. That said, it will be interesting to see if Castellanos sticks with the bat wave or returns to a quieter stance in 2021.

For what it’s worth, all projection systems expect Castellanos to bounce back closer to his career numbers. THE BAT X projections are particularly interesting and encouraging because they incorporate Statcast data such as exit velocity — and Castellanos has thrived in that arena.

If Castellanos can maintain his gains in hard contact while bringing his strikeouts back down, it would be a huge lift to a Reds offense that often struggled to get off the ground last season. And it could lead to one of Castellanos’ best seasons yet.

Great information and insight on Castellanos Matt! Hopefully he will be better in his second season. The Reds will need his usual consistency this season!

Thanks! I think year two will be much better for him.

Behind on my reading, but really enjoyed this, Matt. Let’s hope you’re correct !!