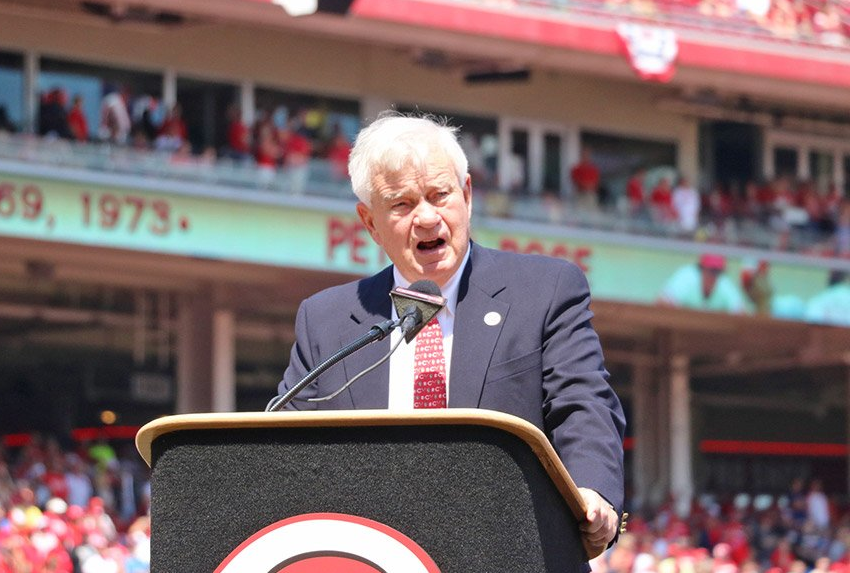 In contrast to the likes of Jerry Jones and other sports team owners, Bob Castellini has never been big on interviews. It has been a good long while since Reds fans have heard the club’s principle owner answer questions — some would say, be held accountable — about the direction of the team. Well, Castellini granted veteran Cincinnati Enquirer sports columnist Paul Daugherty a Q&A session. The revealing 23+ minute recording was published today.

Reds fans should give careful listen to the entire interview, to judge Castellini and evaluate his answers. The indented portions of this post are restatements of what Castellini said, lightly edited for clarity.

I listened to the interview several times. It raised a number of fascinating issues, each of which warrants its own post — the bullpen, Joey Votto’s contract, modeling the Tampa Bay Rays. But this post is limited to three broad points.

(1) Bob Castellini remains 100% devoted to giving Reds fans a winning team and he expects hard work and top performance from his players and front office to accomplish that. But the defining paradox of the Reds operation is that it has to happen under a given, fundamental assumption about money.

Castellini is devoted to giving Reds fans a winning team. You could hear the genuine frustration in his voice when he talked about the 2014-2019 seasons.

When you go six years without being in the playoffs, you aren’t very proud of yourself. Believe me, we do not intend on letting that happen again. If you have to suffer through a retrenchment of a year or two, or three, then you have to do that. But that’s too long a period of time not to give your fans a winner. …We want to produce a winner in the worst way.

To reach that goal, Castellini expects his employees to perform the best they can. In fact, he believes because the club is in a small economic and population market, it has to outwork and outplay other teams. Castellini pointed a finger squarely at the players on the 2020 team:

We have to get our players to play up to their capability. Last season we felt we had a much better team than we showed up on offense.

Regarding his front office:

(Competing as a small market team) is an opportunity to do more with less and still win. There are a lot of different situations like that in life. We feel like we can work harder and smarter. We’ve done that in the past.

But one aspect of the Reds operation — a crucial one — that doesn’t get the best-we-can-do treatment is Castellini’s principle that the team has to operate in a break-even manner financially. That rule is not up for debate; Castellini enforces it as a given. To put it as economists would: The break-even rule sets a resource constraint under which all the other optimizing behavior has to operate. But the rule itself is chosen by the organization itself, not imposed by an external force or authority. When asked if the Reds still operate financially in a break-even manner:

Absolutely. We invest everything back into the franchise. …We always budget to break even.

While Reds fans may rightly question it, the Reds owner wears his break-even principle as a badge of honor. A couple related points here:

First, when owners “put money back into the franchise” they increase the value of that franchise. For example, if a team clears $50 million one year and uses that operating profit to install a new scoreboard, the organization has increased in value. In the interview, Castellini gave another example when he explained that Reds owners viewed spending on Joey Votto’s contract as an investment in the team, to make the team worth more.

Second, owners can borrow against assets that have increased in value. When Castellini was asked about the franchise quadrupling in value since he bought the team, he said you can’t spend based on something’s value. He drew an analogy to a house going up in value. Castellini said you’d have to sell the house to get the benefit.

The concept of taking out a mortgage must have escaped the multi-millionaire. If your house goes up in value, you can borrow more against it if you need or want to. If your major league team goes from being worth $250 million to $1 billion, you can borrow against it to pay for other stuff you want. I’ve never been rich, but I’ve read they often borrow money to make other investments. Bob Castellini understands the concept of borrowing against the value of assets.

I understand and share fan frustration with the Reds. The team has struggled on the field most years under this ownership group. Instead of blaming the players, we aim ire at ownership for not spending enough or the front office for making stupid decisions, in one degree or another. But to allege that Bob Castellini doesn’t want to win or doesn’t care about the fans ignores his push-in-the-chips moves last winter and is otherwise flat wrong. It’s simply that he treats the amount of money going into the team as set, as not up for debate. To point at that and say it proves he doesn’t care about the fans misses the nuance.

2. Bob Castellini confesses to intervening in baseball decisions to prevent popular players from being traded. At the same time he complains about prolonged periods of losing, not seeing the tension between those two views.

When asked if he’d ever let his being a fan affect his ability to trade a popular player, the Reds owner was surprising and unequivocal.

Yes, it has. There have been at least one, or maybe two I did not want to trade because of the appeal they had to the season ticket buyers.

When asked for specifics, he mentioned three:

Billy Hamilton was one. Todd (Frazier) right after he won the Home Run Derby, they wanted to trade. That was a tough one. Too tough. And Aroldis (Chapman). Then of course he had his tragedy. We missed the boat on that one. But it was not predictable.

Castellini explained that his motivation in vetoing the deals was attendance and that trading fan-favorite players would jeopardize income and possibly winning.

We depend a lot on our attendance. Because you get prospects for your key players who will play in years to come does that mean it sacrifices your ability to appeal to your attendance to get more and more attendance and win in that particular year or one or two years.

Those statements reveal both that Castellini cares about the fans (if anything, too much) and that he misunderstands what motivates most attendance. No doubt certain fans pushed through the narrow GABP turnstiles to watch Aroldis Chapman emerge from centerfield gate to Wake Up. Or paid to see Billy Hamilton make that night’s highlight reel play. But the bigger picture is that winning and losing drives most fluctuations in attendance, particularly in Cincinnati.

Failing to trade Hamilton, Frazier and Chapman (I’d add Cueto) at peak value hobbled the rebuilding plans and set back winning. The difference alone in what the Reds and Yankees got by trading Chapman is staggering. Prospects can end up winning MVP and Cy Young Awards. Fans file in to see those players, too. I’ve heard of one trade involving Hamilton that ownership turned down which would have brought a pitching “prospect” to the Reds who has ended up winning serious hardware.

As team owner, Bob Castellini has the right to make or veto trades for any reason he wants. But he’s not a baseball person. He’s shrewdly hired a front office full of smart people and given them tools to come up with moves they’ve calculated would help the club succeed. Today’s interview shows that Castellini has been way too involved in baseball decision making, intervention that comes at the expense of the team’s win column.

(3) Father Time has full access to the owner’s box.

You see the Father Time clichés all the time when discussing players getting older. Father Time is undefeated. Father Time always bats last. Further, sports writers have come up with the polite phrase “decline phase” to talk about the effects of aging on performance. Well, axioms about Father Time and decline phases apply to managers, coaches, general managers and owners, too. Not only in baseball, but other sports. In most walks of life, really.

As the business owner, Bob Castellini doesn’t have an HR department or mandatory retirement rule that dictates he retire. Castellini isn’t an aging politician subject to voters who decide it’s time for someone else to represent them. The Cincinnati Reds are a privately-owned company, so Castellini doesn’t even face shareholders. Here he is, at an age where most people have been retired for a decade, still talking on the record to someone who works for a newspaper.

I’ll confess I was surprised this morning to see the interview had landed. I thought we might have already heard Bob Castellini’s last. His answers were lucid and insightful. But you can tell the exchange was half-scripted. Castellini had the questions ahead of time (he even mentioned that once) and he seemed to refer to notes when answering. There was a tiny bit of rambling toward the end.

Please believe me that I’m not being critical or mean. If we’re lucky, each of us is getting older and we likely have a better appreciation for aging after the past 12 months. Bob Castellini and I even share a birthday, though he’s got a few years on me. This September the Reds owner turns 80.

Rather, today’s interview drives home the point that it’s time for Reds fans to start looking ahead in relation to team ownership, direction and possible change. There are indications and reports the transition may have already begun in certain respects.

Phil Castellini has been in charge of the non-baseball half of the Reds organization for years. Will he move over to the baseball side as his dad phases out? If so, will he intervene as much or even more in Reds baseball decisions? Will he have a different view of the club’s break-even policy? In other words, will the next generation of Castellini family management he be better or worse for the Reds than what we’ve witnessed the past 15 years?

Perhaps the next interview should be with him.

The dude is obtuse on baseball decisions. He inherited his wealth from the family business and guards his family wealth as his number one priority. He is not willing to be a risk taker and wants to ensure his family inherits the most amount of money possible. With those priorities, the Reds are certain to be middling for the foreseeable future and Bob is wasting the talents of Sarah Vedder, Kyle Boddy, and Sam Grossman.