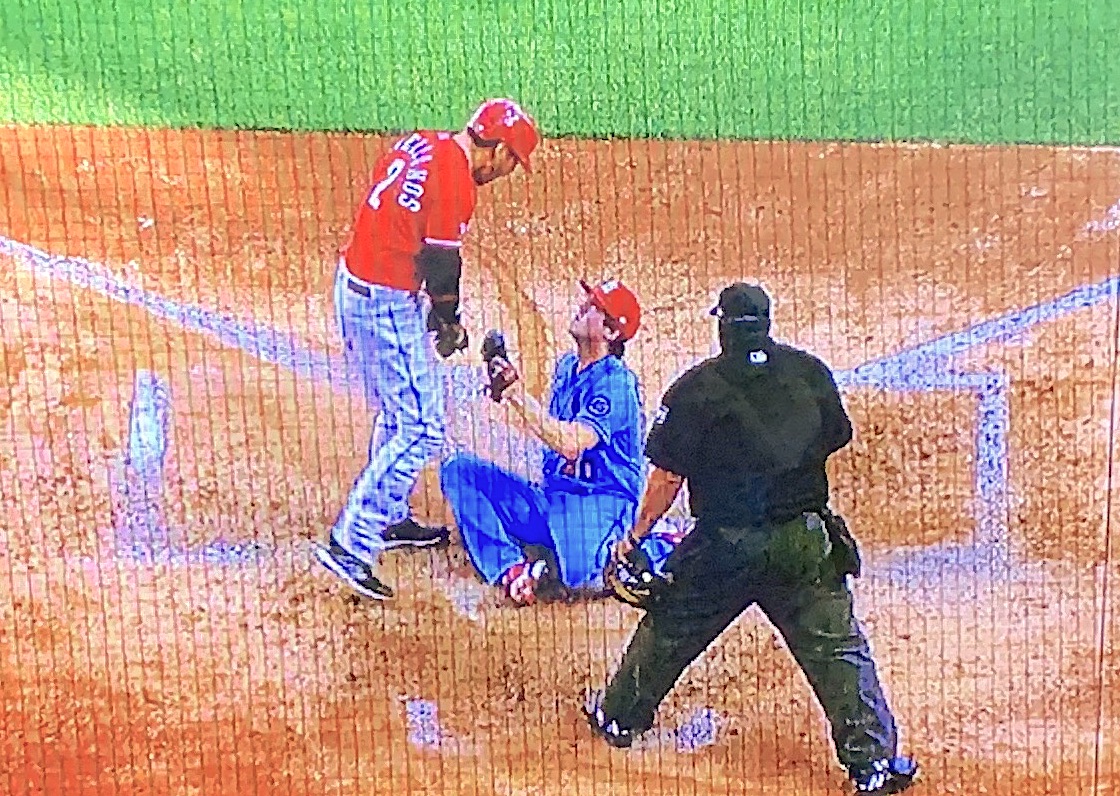 If you were listening to the Reds radio broadcast today, you probably caught a Jeff Brantley special. After the Reds had scored six runs in the bottom of the third, on their way to a 9-6 win over the Cardinals, the Reds announcer and former relief pitcher declared the home town team had “broken out a can of ‘Oh Lord, help me’.”

I’d never heard that phrase before; but I figured it was something Southern that Brantley had picked up in Birmingham or Starkville. But when you search “can of oh lord help me” to find out about it, Google responds “no results found.” Anywhere on the entire World Wide Web.

Ernie Harwell, legendary Hall of Fame broadcaster for the Detroit Tigers, used to say you’ll see something in every baseball game you’ve never seen before. Or ever heard before.

It’s hard to pick out one or two offensive heroes today. You could start with Tucker Barnhart, who started the scoring and gave the Reds their first lead of the season with a 2-run bomb off Adam Wainwright in the 3rd. That ball traveled 403 feet and brought to mind that Barnhart had a good season last year batting against right-handed pitchers, including popping 5 homers in 110 plate appearances. Barnhart’s homer drove home Tyler Naquin, who had walked to lead off the inning. Here’ the homer:

Barnhart Bombs are back! 💣 pic.twitter.com/V3zkAkyKSK

Mike Moustakas had a single, double and a walk. He contributed a cue shot down the third base line to the 3rd inning outburst, driving in Nick Castellanos. Moustakas also made a couple nice plays at third base. He’s been rock solid defensively in the first two games. 3B is his natural position and there’s a great chance the Reds will be better defensively there this year compared to last.

Jonathan India had a two-hit game, with two infield singles. His nubber down the third base line in the 3rd knocked in a run making the score 4-1. India also contributed great defense for the second game in a row. India has had back-to-back multiple hit games to start his big league career. The Reds will also be better at 2B defensively this year compared to last. Here’s the India play:

In the fourth inning, Nick Castellanos was hit by a pitch, went from first-to-third on a Joey Votto hit, and scored on a wild pitch from Jake Woodford. Castellanos’ enthusiastic response to beating the tag from the pitcher who hit him provoked a standard-issue bases-clearing shoving match. The Reds right fielder was thrown out for igniting the situation. He had singled and scored in the 3rd inning. Here’s the scuffle:

The Reds' and Cardinals' dugouts have emptied after Nick Castellanos scores on a wild pitch. pic.twitter.com/M8sSctUjbo

Tyler Naquin, who was playing center for Nick Senzel, batted twice in the 3rd, leading off with the walk, then putting the final stamp on the inning with a 2-run ground-ball single that was just out of the reach of the Cardinals second baseman. Senzel entered the game later.

.@TyNaquin caps a SIX-RUN third inning for the @Reds!

Aristides Aquino, who was in the game for Castellanos, hit a 404-foot home run to make the score 9-3. It made amends for Aquino losing a fly ball in the sun and giving up a run.

Tyler Mahle was outstanding. He pitched 5+ innings throwing 84 pitches. Mahle struck out nine and walked two. The two walks came in the top of the 3rd when Mahle seemed to be nibbling with his slider. when facing the heart of the Cardinals order a second time. On 36% of his pitches, Mahle induced either a called strike or a swing-and-miss. Even more encouraging, Mahle’s fastball spin rate averaged 2527 rpm, a jump from 2389 last season. Mahle’s fastball velocity averaged 95.1 mph, also well above his 2020 rate of 93.9. Mahle’s fastball topped out at 98 mph and he threw four pitches that had a higher velocity than any pitch he threw last year. Mahle’s spin rate on his slider was also up, too.

After giving up a leadoff walk, Cam Bedrosian came in to get two outs in the 6th, following Mahle. Bedrosian had the third out retired on the fly ball that Aquino lost in the sun. David Bell called on Cionel Perez was called on to get the last out which he did on a pop-up to second base.

Perez pitched a clean 7th inning with a strikeout. Perez’s fastball topped out at 99 mph and got a 50% whiff-rate on 10 swings. Perez struck out Nolan Arenado to start the 8th inning but was lifted after giving up a walk and hit. Sean Doolittle came on and walked Yadi Molina to load the bases. Dylan Carlson got a sacrifice fly to make the score 9-4. Doolittle struck out Austin Dean to end the inning. Doolittle’s fastball averaged 93 mph. He threw it on all of his 13 pitches.

Sal Romano came in to pitch the 9th inning, his second appearance in two games. Romano gave up a single to Paul Goldschmidt and a home run to Nolan Arenado, making the final score 9-6.

The Reds conclude the Cardinals series with an afternoon game at Great American Ball Park. First pitch is at 1:10 p.m. EST as Jeff Hoffman faces off against Carlos Martinez.

I’ll never forget it, ‘A can of “Oh Lord, help me”’. Heard it, backspaced 10 seconds and heard it a second time. Brantley exceeding expectations, and Nick C making it happen, new respect there.

Hearing a “can of oh lord help me” is even better than when Brantley explained the difference between: “pert near”, “a goodly bit” and “a fer piece.”