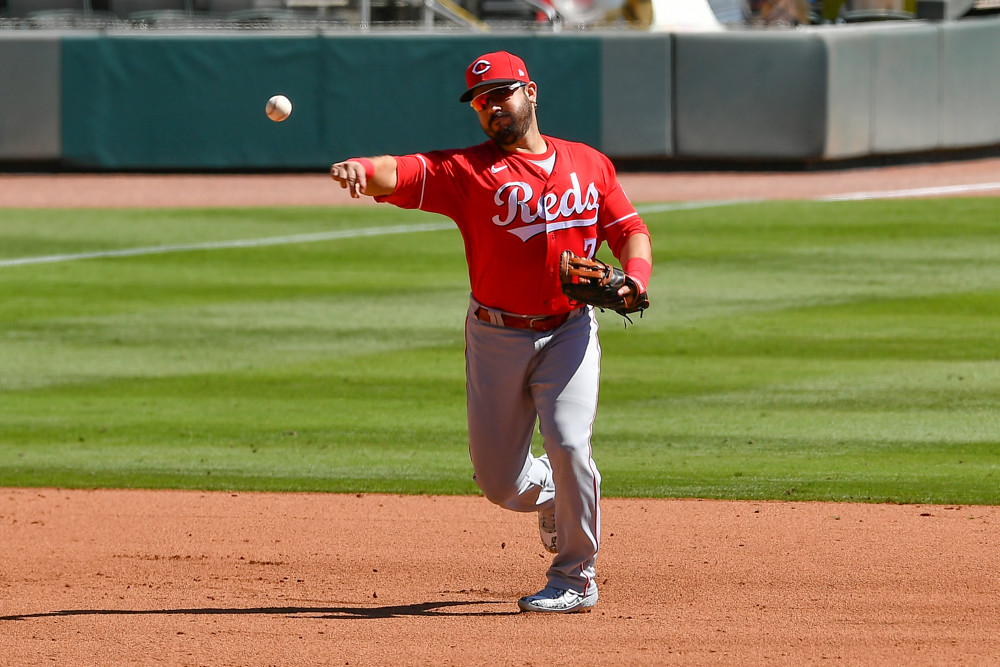 Opening Day was, unfortunately, no joke for the Reds, as they dug themselves an early hole and couldn’t climb out in an 11-6 loss.

From bad defense and uncharacteristic struggles by ace Luis Castillo to poor defense and another untimely injury to Nick Senzel (left shoulder), the 2021 season didn’t get off to a memorable start.

[Update: Per C. Trent Rosecrans, David Bell was optimistic about Senzel after the game, saying he hopes the center fielder will return this weekend.]

But it wasn’t all bad. Let’s start with the good news.

The offense wasn’t the problem today. Cardinals ace Jack Flaherty lasted less than five innings against the Reds, allowing six runs. Overall, Cincinnati picked up 10 hits, including five for extra bases, and five walks. They consistently took quality at-bats and made the St. Louis pitching staff grind in what was hopefully an encouraging sign of things to come.

Facing a 6-0 hole, Jesse Winker started the game off with a scorcher of a double to right field (110.9 mph), moved to third on a flyout, and scored on a wild pitch. Remember, Winker led the Reds in average exit velocity last season and ranked in the 90th percentile among all MLB hitters.

As there’s a drive into deep left field…

If you picked Nick Castellanos to hit the Reds’ first home run of the season, you win. He lined a two-run homer over the left-field fence in the third inning (109.7 mph, 407 feet).

The first homer of the Reds' 2021 season belongs to Nick Castellanos! #RedsOpeningDay pic.twitter.com/kQSt3uQZHA

Castellanos added a double in the fifth inning and a single in the ninth inning to finish a triple short of the cycle. We recently wrote about why Castellanos is poised for a better sophomore season in Cincinnati.

Eugenio Suarez also homered, leading off the fourth with an opposite-field blast (104.6 mph, 346 feet) to partially make up for a rough day defensively (more on that later).

Jonathan India — the first Red to debut and start on Opening Day since Chris Sabo in 1988 — picked up his first MLB hit in the fourth, doubling down the left-field line.

First big league hit down… many more to come.

India also smashed a line-drive single in the sixth inning that came off the bat at 109.7 mph. He’s the fourth Reds hitter to pick up two hits in his MLB debut since 1992. The others: Tyler Stephenson, Mike Leake (!), and Jay Bruce.

The Reds scratched across two more runs in the fifth inning behind the strength of their best hitters. Winker (walk), Castellanos (double), Joey Votto (RBI single), and Suarez (walk) all reached base consecutively before Mike Moustakas drove home another run with a sacrifice fly.

Brutal baserunning ended another potential rally for the Reds in the sixth. Tyler Stephenson, India, and Winker all reached with singles to load the bases with one out. Castellanos flew out to left field, but Stephenson inexplicably broke for third base and was doubled up before India could score on a sac fly.

All in all, though, this was an impressive showing by the bats in game one.

It was not an ideal start to the season for Luis Castillo, who we pegged as a Cy Young sleeper. Whether due to the frigid weather or not, he didn’t have his best command or stuff on Opening Day. Bad defense did him no favors, either. He lasted just 3.1 innings, allowing 10 runs (8 earned) on eight hits and two walks in what was one of the worst outings of his career. For only the second time in his career, he didn’t strike out a batter.

Castillo just didn’t have a feel for any of his pitches today. The chart below shows how off his command was: 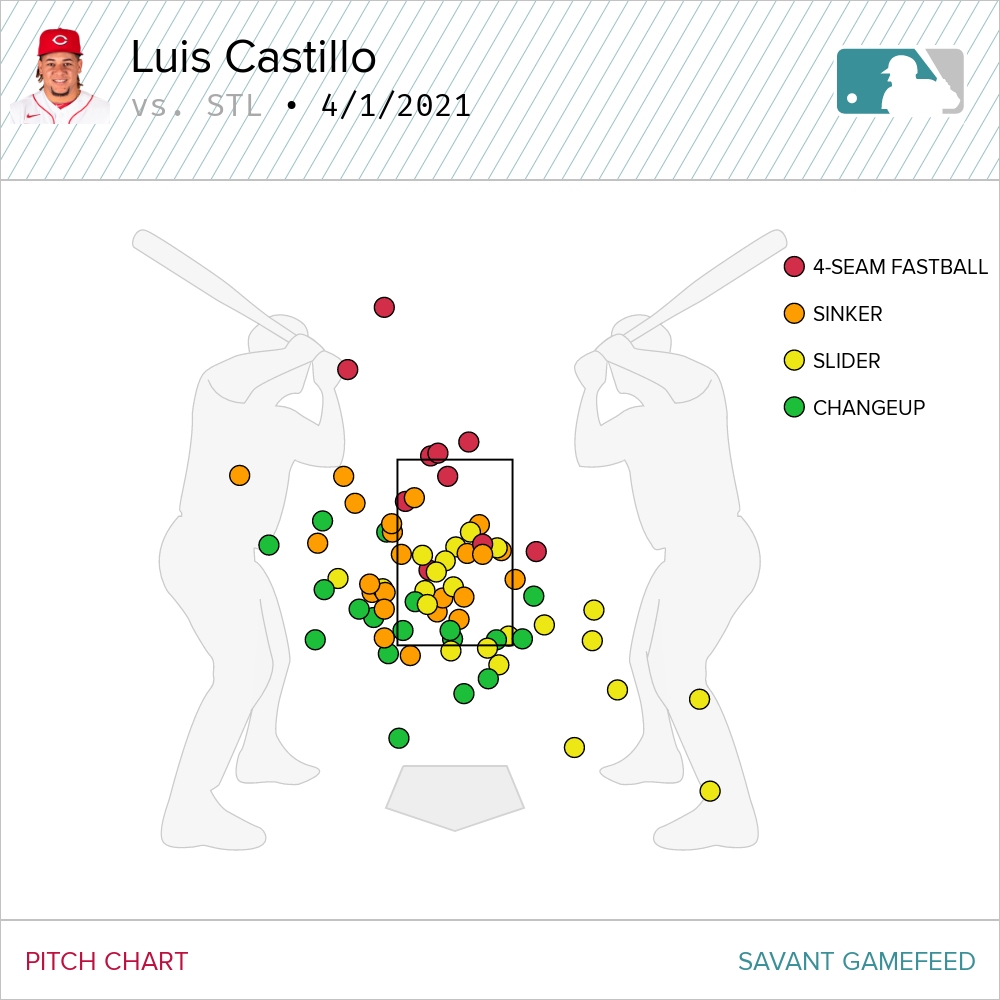 Clearly, none of his pitches were particularly sharp. He hung sliders in the middle of the plate and consistently missed to his arm side with the changeup and sinker. He got only six swings and misses, his lowest total since 2018.

But the defense — a legitimate worry for the 2021 Reds — did Castillo no favors.

With the score already 1-0 in the top of the first inning, shortstop Eugenio Suarez had a chance to limit the damage with a double-play ball hit by the slow-running Yadier Molina. But Suarez let the ball roll under his glove into left field, allowing two runs to score. Next batter Dylan Carlson made things worse with a three-run home run. Just like that, it was 6-0 with only one out. Castillo made a bad pitch to allow the home run, but five of the six first-inning runs tied back to bad defense.

Suarez made another error in the second inning, directly leading to another run. Paul Goldschmidt hit a ground ball in the hole to Suarez’s right. He fielded it cleanly this time, but his throw to first was low, resulting in another error that let Goldschmidt take second base. There’s an argument to be made that Votto should’ve scooped the ball at first base, but the throw was undoubtedly poor. Arenado followed with an RBI single.

It’s far too early to panic about Suarez’s defense, but it wasn’t a great first showing.

Castillo also spiked a throw on a ground ball back to him in the fourth, though it was another ball that Votto could’ve handled at first.

Cam Bedrosian was called on to clean up the damage after Castillo departed in the fourth. His Reds debut didn’t go well, allowing a two-run home run to Tyler O’Neill.

The pitching in the back half of the game was much better. Sal Romano (2 IP), Carson Fulmer (2 IP), and Sean Doolittle (1 IP) combined for five shutout innings.

Romano impressively retired Goldschmidt, Arenado, and Paul DeJong in order during his second inning. Fulmer retired all six hitters he faced and spun up some nasty curveballs. Four of the six curves he threw were either called strikes or whiffs.

Meanwhile, Doolittle touched 94 mph with his fastball, which was nearly 2 mph faster than any pitch he threw in 2020. His average fastball was 93.0 mph, 2.3 mph higher than his average last year. Of the nine fastballs swung at, he got five whiffs. An encouraging start for the lefty.

The Reds are off tomorrow and will reconvene with the Cardinals at Great American Ball Park on Saturday. First pitch is at 4:10 p.m. EST as Tyler Mahle faces off against Adam Wainwright.

Infield defense was sloppy to say the least. Poor base running error by Stephenson didn’t help the Reds rally either. Castillo will pull it together and the offense was positive overall. Until Saturday….

This was a very odd opening day in baseball. There were 13 games and in six of those games at least 10 runs were scored and in four of those six it was 15 or more runs. You would think with every team starting their number one pitcher that there would not be so much scoring.