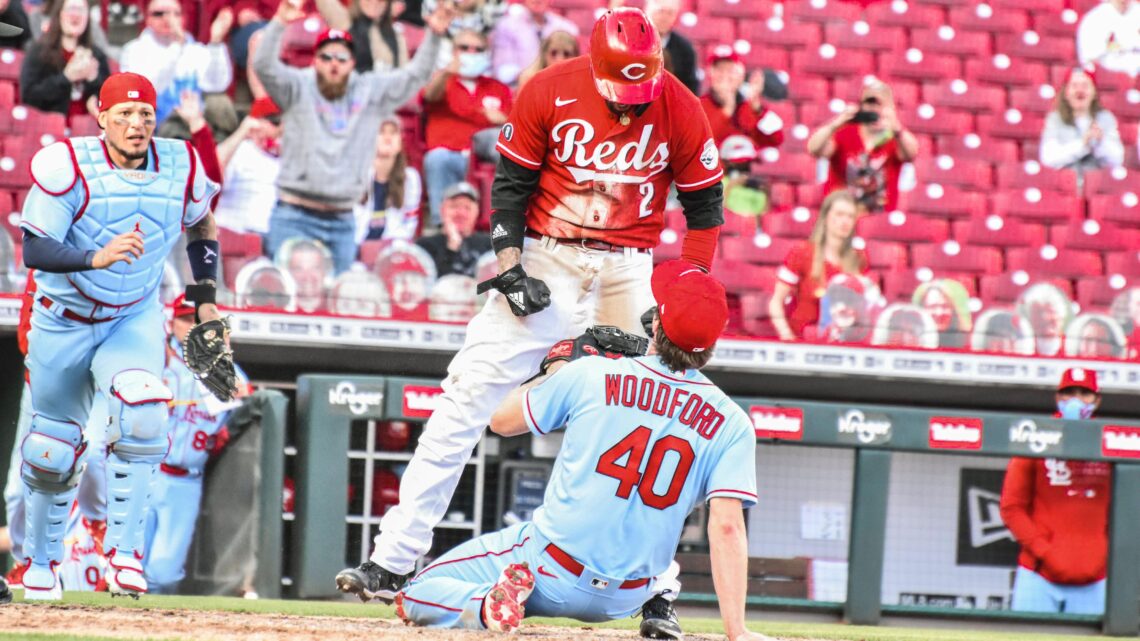 The Reds came into the day looking to take the series from the Cardinals. For the second day in a row, Nick Castellanos played a huge role in the game’s storyline, with key contributions to the team’s offense.

The first time through the order went quietly for the Reds, with nobody reaching off of Carlos Martinez. Castellanos, yesterday’s hero, jumpstarted the offense with a one-out triple in the fourth inning that narrowly missed being a home run to straightaway center field. Joey Votto followed that up with a single to right to drive in Castellanos and put the Reds on the board. Notably, Votto’s single had an exit velocity of 113.4 mph, harder than any ball he hit last season. Eugenio Suárez then drew a walk. The Reds weren’t able to muster any more runs in the inning, stranding two runners.

The Reds threatened again in the bottom of the fifth. Tyler Stephenson reached on a one-out infield single and pinch hitter Kyle Farmer drew a walk. Tyler Naquin then hit a 96.6 mph ground ball to the right side of the infield, with Tommy Edman making a diving stop to record the out and keep a run from scoring. Castellanos then hit a three run home run to left center field to make it a 4-1 ballgame. Votto then grounded out to end the inning.

Suárez drew another walk in the sixth inning, and Nick Senzel drew a walk of his own to make it first and second. Jonathan India, who Jim Day had just dubbed “The Red Sparrow” for his resemblance to Jack Sparrow from the Pirates of the Caribbean movies, hit an RBI single to drive in Suárez and move Senzel to third. Senzel scored on a wild pitch, then Stephenson then hit a single up the middle to score India, making it a 7-1 game. The Reds opted to let Tejay Antone bat for himself, and he dropped a bunt down the third base line. The Cardinals went for the out at second base and didn’t get it in time, making it first and second, still with one out. Tyler Naquin then launched a 109.8 mph home run to right field, making it a 10-1 game.

Mike Moustakas worked a leadoff walk in the seventh. Three batters later, Stephenson grounded a single to the right side for his third hit of the game. Alex Blandino, who had replaced Votto as part of a double switch, hit a two run double to push the score to 12-1.

Every Reds position player in the starting lineup reached base at least once.

Jeff Hoffman rolled through the first four innings, striking out five while only allowing one baserunner, a Nolan Arenado double in the first inning. Things started to unravel a bit in the fifth, as Tyler O’Neill hit a leadoff double and Yadier Molina drove him in with a single to tie the game. Hoffman then got Dylan Carlson to ground into a double play and struck out Justin Williams to end the inning. Hoffman was then removed for a pinch hitter in the bottom of the fifth. Hoffman went five innings, allowing one run on three hits, striking out six and walking none. He also recorded 13 swinging strikes in 77 pitches.

Tejay Antone allowed the first two batters to reach in the sixth via a walk and an infield single. He worked out of the inning, getting two fly outs and a strikeout to end the inning.

Carson Fulmer pitched the seventh. He struck out two while allowing just one baserunner, a HBP by Dylan Carlson. Fulmer came back out for the eighth, though was visited by David Bell and the trainer prior to throwing a pitch in the inning. He stayed in the game, allowing a leadoff single and then walking the next batter. He then retired Goldschmidt on a fly ball, before being taken out of the game.

Sal Romano came in to finish the eighth, getting pinch hitter Edmundo Sosa to ground into a double play. He stayed in for the ninth, retiring the side in order.

The Reds begin a three game series against the Pirates tomorrow at GABP. José De León gets his first start of the season, facing JT Brubaker. First pitch is scheduled for 6:40 PM.

I can’t help but be excited about the new and fairly new reds on this roster. India, T. Stephenson, Antone, even Mahle.

Still lots of questions marks, but India, Stephenson and Senzel can make this a + team.