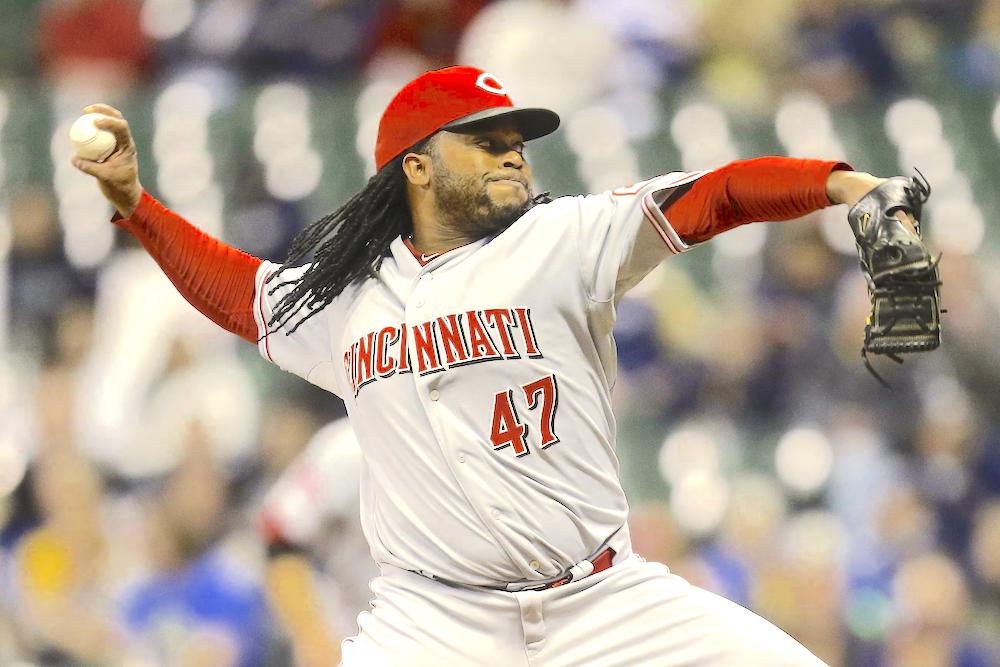 A post about an improbable thread line running through three Reds pitchers.

The Reds signed pitcher Johnny Cueto out of the Dominican Republic in 2004 at the age of 18. The young right-hander moved through the organization at a steady clip, making his first appearance with the Reds on a sunny day in April 2008. As with most 22-year-olds, Cueto struggled with control his first couple years and his results were inconsistent. But by 2010, Cueto had become good and great by the 2011 season.

The Reds and Cueto reached an agreement on a contract extension that covered his three years of arbitration, plus his first season of free agency. The deal also had a team option of $10 million for 2015.

Over the four seasons of 2011-2014, Johnny Cueto made 102 starts for the Reds, posting an ERA of 2.48 and xFIP of 3.51. The first of those numbers was 36% better than league average and the latter 8%. Three of those four seasons were among the best eight individual pitching seasons for the Reds in the decade of the 2010s. I wrote this about Cueto’s 2014 season:

Johnny Cueto was a bright spot. He led MLB with 34 starts, 243.2 innings pitched and 242 strikeouts. Cueto threw 4 complete games, two were shutouts. In 23 of his 34 games, Cueto pitched at least 7 innings, and in 15 of those, at least 8. He had a streak of six games pitching 8 or 9 innings. Cueto’s 2.25 ERA from 2014 remains the best of his career, as was his 3.21 xFIP. That ERA was 39% better than league average and third best in MLB, behind Clayton Kershaw, Felix Hernandez and Chris Sale. Cueto finished 2nd, behind Kershaw, in the N.L. Cy Young vote.

In total, Cueto made 213 starts for the Reds, dropping the ball just once.

With Cueto having suffered a series of injuries through the 2013 season, the Reds decided to put their chips down on Homer Bailey, who had thrown more than 200 innings in 2012 and 2013 and who himself had become one of the top 25 pitchers in baseball. The Reds weren’t going to extend Mat Latos, because by then they knew he was Mat Latos. By the time Cueto had proven his ability to stay healthy in 2014, he had become too expensive to re-sign.

Once the Reds decided not to give Cueto the large contract he was seeking, they should have looked to trade him before the 2015 season. Instead, the Reds picked up Cueto’s $10 million option and headed on amid reports that owner Bob Castellini was loathe to trade any of his stars (Cueto, Aroldis Chapman, Todd Frazier) prior to MLB’s All-Star game in mid-July, which the Reds happened to be hosting.

By the end of July 2015, with Cueto’s free agency looming and Walt Jocketty’s Reds nearly 20 games out of first place, the club traded Johnny Cueto. It was July 26, less than two weeks after the major league All-Star Game.

The Return for Cueto

Finnegan, who had pitched in the 2014 World Series for the Royals as a reliever, started 40 games for the Reds. The phrase “so far” should be attached to the end of that sentence since Finnegan, who is still just 27, had a bit of a career resurrection last month and will pitch at the Alternate Site in Louisville. He made 31 major league starts in 2016, but after that headed into minor league/disabled list purgatory before resurfacing in Goodyear this spring. John Lamb made 24 forgettable starts for the Reds in 2015 and 2016 before the Reds cut him.

Of the three pitchers the Reds received for Johnny Cueto, Cody Reed was considered the one with the best arm and most upside. He landed on many top prospects lists. But Reed didn’t develop much with the Reds organization and get much of a shot at the rotation from 2016-2018, even though the Reds were throwing starts at anyone those years. Reed did have a good year (3.51 xFIP) in the bullpen in 2018. He made 11 relief appearances for the Reds last year before the front office found itself in a roster jam and designated Reed for assignment, since the 27-year-old was out of options.

So how did the Reds do in the Cueto trade? One way to judge is to compare the outcome to a parallel trade that took place that summer.

The Detroit Tigers were shopping a pitcher who was similar to Cueto. David Price had won one Cy Young Award and finished second in 2014. Like Cueto, Price was 29 and about to become a free agent. Four days after the Cueto deal, the Tigers traded Price to Toronto. The return was also three pitchers: Daniel Norris, Matt Boyd and Jairo Labourt. At the time, the return was considered comparable to what the Reds got for Johnny Cueto.

The two trades occurred at the exact time when the baseballs got juiced and began to fly farther. But the end to the league’s low-run environment wasn’t apparent yet. The Reds and Tigers had said they were looking for offense, but neither was able to pry even one hitter from the sellers.

You could make a case that the Tigers ended up with the better return, based on how things have turned out. Norris and Boyd still pitch for the Tigers. Boyd was the Tigers Opening Day starter last week. On the other hand, both have been near replacement level, with Norris a smidgeon better and Boyd a bit below. Boyd has made 129 starts for the Tigers and that’s worth something. But his collective FIP/xFIP is in the neighborhood of 4.60 — a neighborhood most other major league clubs would avoid. Labourt made four starts in 2017 and has become a minor league/international league journeyman.

Before the Reds had to release Reed, the Reds were able to work out a deal with the Tampa Bay Rays.

Cody Reed was widely considered the pitcher with the most upside the Reds got in the Cueto return. But Reed didn’t get much of a shot at the rotation, even though the Reds were throwing starts at anyone in those year. Reed had a good year (xFIP 3.51) in the bullpen for the Reds in 2018. A knee injury sidelined him for most of 2019.

Cody Reed had struggled in nine relief appearances (5.93 xFIP) in last year’s COVID-shortened season before the Reds found themselves in a roster squeeze. With Reed out of options and the Reds wanting to replace him in the bullpen, the young left-hander’s time with the organization came to an end.

But Reed still had value in the eyes of other contending clubs who were desperate for relief help. The Reds designated Reed for assignment, headed for waivers, but were able to work out a trade with the Tampa Bay Rays for promising starting pitcher Riley O’Brien on August, 28.

After his World Series championship with the Royals (and their 3B Mike Moustakas) Johnny Ceuto got to free agency and cashed in. He signed a 6-year, $130 million contract with the San Francisco Giants. Cueto had one more outstanding season in 2016 (3.42 xFIP) before things started to slip. He had to undergo Tommy John surgery and missed the end of 2018 and almost all of 2019. Cueto did pitch the entire abbreviated 2020 season for the Giants, but was worse than average (4.78 xFIP). Cueto is in the final year of his contract, still in the Giants rotation and projected for an ERA of 4.54.

As much as it broke the hearts of Reds fans to see Johnny Cueto go, the Reds made the right decision not offering him the kind of deal he signed with the Giants. Cueto missed the better part of two seasons and has been ineffective in two others. Based on the FanGraphs calculation for WAR, Cueto has earned just 6.8 WAR in the first five seasons of his contract, and 4.9 WAR was from 2016. Johnny Cueto is projected at right about league average this year, and is once again earning $21 million.

Cody Reed made the 2021 Tamp Bay roster, but hasn’t pitched in the Rays first four games. Reed is a reliever, but the Rays may use Reed in part as an Opener, where he pitches the first inning or two of a game before the “starter” comes in. Reed, who has experience as a starter is well suited for that role. Due credit to the Rays for their imagination. Reed is projected for an ERA of 3.55, which the Reds could use. Reed is not due to reach free agency until after the 2024 season.

You have to wonder how Cody Reed would have fared if Walt Jocketty had known or cared more about modern pitching instruction. Reed was a Lost Boy, one of a group of promising starters from 2015-2018 whose development stagnated under the Reds out-of-date methods. If Reed would have had a longer time to work with Derek Johnson and crew, he might have better fulfilled his potential. It will be interesting to see how Cody Reed does with the Rays.

**Update [One of our great readers pointed out to me a related reference in the book The MVP Machine that I had forgotten. “In Cincinnati, (Tony) Cingrani says, the support staff ‘was a lot of old-school baseball guys as opposed to [LA], it’s trying to embrace that analytics side.’ Although the Reds shared some information with players, it was barebones and not tailored to individual skill sets. ‘We were kind of on our own,’ he says, adding ‘It was just like, Hopefully you have success. Good luck.'” Sigh.]

That brings us to Riley O’Brien (26), who has been a prospect with upside in the Rays organization. He pitched for their AA affiliate in 2019. Last season, O’Brien was assigned to the Rays alternate site, as he was with the Reds after the trade. In December, the Reds added O’Brien to their 40-man roster to protect him from the Rule 5 draft. Reports indicate the Seattle native has added needed strength to his slender frame.

O’Brien throws four pitches. His fastball averages in the mid-90s and has topped out at 98 mph. Here’s Matt Wilkes’ scouting report of O’Brien from when the trade took place. A new FanGraphs report, based in part on watching video from Mason, has mixed things to say about O’Brien but calls him “a classic small-school late bloomer with a good frame and athletic delivery, his stuff had been getting better for a few consecutive years.”

About a week ago, one sentence about O’Brien caught my eye. C. Trent Rosecrans’ reported in The Athletic that he had “heard from several people around the game that (O’Brien) has a chance to be a big league starter.”