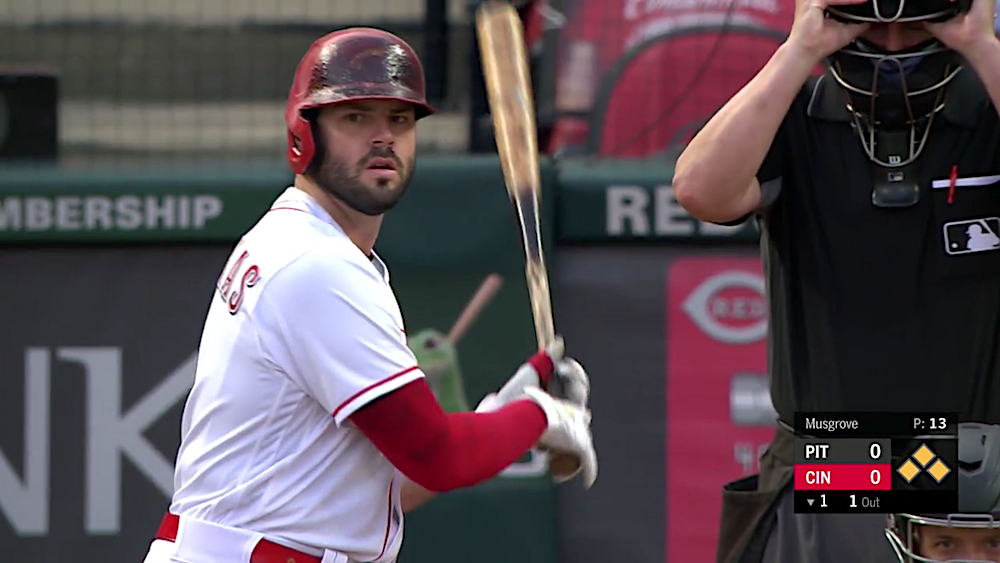 José de León turns in a solid performance, Nick Castellanos takes advantage of playing through his appeal, and the bullpen locked down the Pirates for 4 innings to take game one of the series with the Pirates.

The Reds, down 2-0, began clawing back in the second inning when Nick Senzel walked then hustled to beat a throw to second base on a Jonathan India weakly hit ground ball to third base. José de León helped his own cause by getting his first hit of his major league career on a single past a diving Adam Frazier for an RBI to make it 2-1. Naquin’s deep fly out ended the inning with two runners on.

Two runners were also stranded in both the third and fourth inning before the fifth when Mike Moustakas crushed a 430-foot solo home run just past the right field foul pole with an exit velocity of 110.2 mph.

After five straight strikeouts by Reds hitters to end the fifth, through the sixth, and start the seventh, Nick Castellanos stayed scorching hot driving a 431-foot home run to left center to take the lead 3-2.

The Reds added on some needed insurance in the bottom of the eighth. Moustakas added to his home run on the day with a hard double before a wild pitch moved him over to third base. Senzel walked for his second time to put runners on the corners, and India singled to left to bring “Moose” home. Barnhart watched one low for strike three followed by a pop-out from Farmer. Aristides Aquino, after pinch hitting in the seventh with a strikeout, doubled in Senzel to make it 5-2.

José de León got off to a bumpy start in the first inning giving up two solo home runs to Phillip Evans and Colin Moran. De León then settled in for a nice 1-2-3 inning in the second, but after opening the third inning with a seeing eye single from pitcher JT Brubaker (also his first career hit), another Eugenio Suarez error cost the Reds a double play. De León cleaned up the mess, stranding both runners striking out the side. After the third, de León  largely cruised through the lineup, including a five pitch fourth inning and striking out the side again in the fifth. He opened up the sixth inning with a walk before giving way to Cionel Perez. De León finished with 9 strikeouts and only two walks.

Cionel Perez locked down the sixth inning stranding de León’s lone baserunner by striking out Moran and Gonzalez on fastballs before Tucker Barnhart caught Bryan Reynolds stealing on what appeared to be a botched hit and run.

Never too early to start campaigning for Gold Glove #3. pic.twitter.com/YedKd6Fdky

Sean Doolittle was called in for the seventh keeping the Pirates off the bases with two strikeouts on swings and misses with his fastball.

Lucas Sims made his season debut in the eighth picking up where he left off in 2020. He struck out Wilmer Difo swinging on a slider registering 2,811 rpm, and then retired Adam Frazier on an infield fly out before Phillip Evans grounded out to end the inning.

Amir Garrett also making his season debut to close out the ninth needed a few batters to knock the rust off. Bryan Reynolds took Garrett deep to lead off the inning, and Colin Moran followed up with a bloop single. Amir settled in to strike out Erik Gonzalez, got Polanco to ground into a force out at second, and closed out the game after a walk with a groundout to Suarez.

The Reds look to extend the winning streak in game two against the Pirates at Great American Ball Park. First pitch is at 6:40 p.m. EST as Wade Miley faces off against Trevor Cahill.

Based on a sample size of four games Matt Wilkes looks absolutely prophetic.