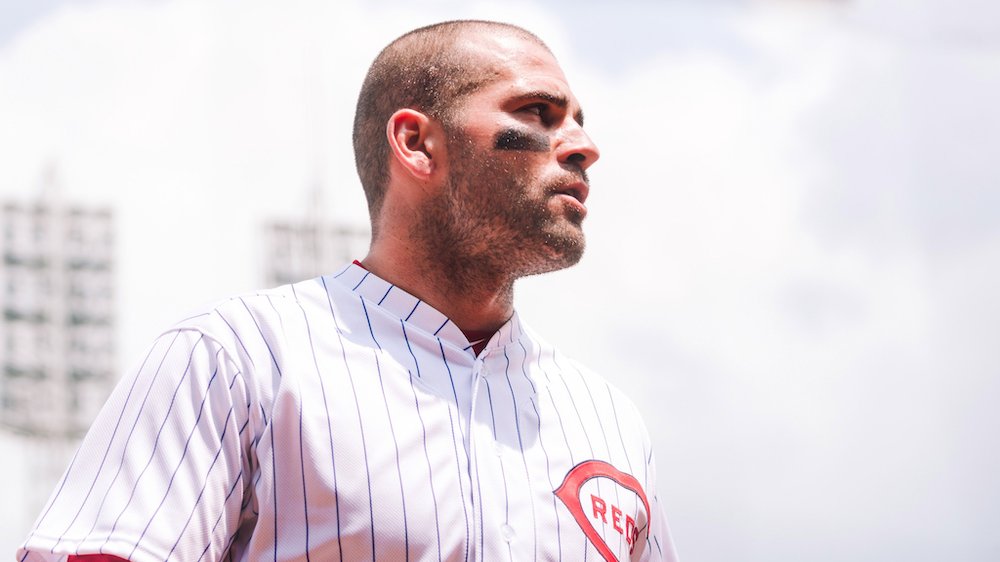 The Reds left Los Angeles on Wednesday content with themselves. They ended their seven game slide, showed resiliency on numerous occasions, and ultimately took two of three from the defending World Champion Dodgers. The same resiliency was shown on Friday, as the team battled back from a cautious start to defeat the Cubs in the first game of a crucial divisional series.

Entering Friday, the Reds were slashing .290/.373/.534 as a team at Great American Ballpark. After Friday, it remains clear they are enjoying the home cooking in 2021.

Through the first two innings, the offense was mostly quiet. Joey Votto was the only Red to reach base, when he roped a 100.9 MPH double in the first inning. Wade Miley was the next baserunner, as his one-out single (86.2 MPH, .940 xBA) in the third inning got things rolling. After a Jesse Winker single (98.3 MPH, .630 xBA) and Nick Castellanos RBI groundout, the Reds cut the lead to 2-1. Votto then continued his great night at the plate, banging a 429 foot home run (113 MPH), giving the Reds a 3-2 lead.

It was the 300th of Votto’s career, and he now only trails Frank Robinson and Johnny Bench on the Reds’ all-time home run leaderboard.

In a welcomed sight, Eugenio Suarez opened the fourth inning with a 423 foot, 107.6 MPH home run.

bThis snapped an 0-26 slump for Suarez, who the Reds desperately need to get back on track. Tyler Naquin followed Suarez by crushing a 106 MPH single to center field, and then scored when Nick Senzel hit his first home run of 2021 on a 102.2 MPH drive to left field.

Later in the inning, Tucker Barnhart reached on a walk and Miley grounded into a fielders choice. Miley would go first-to-third on a 106.5 MPH single from Castellanos, and then score on a 107 MPH double from Votto, his third 100+ MPH hit of the evening.

Justin Steele entered to pitch in the fifth and retired the Reds in order. He then struck out Tucker Barnhart to open the sixth, but Kyle Farmer blooped an 84.4 MPH single to center field that was misplayed by Jake Marisnick. Farmer would reach third on the error, and then score when Jesse Winker roped a 108.2 MPH shot at David Bote. Bote threw home on the play, but Farmer beat the throw.

Six of the next eight Reds would be strikeout victims, but the offense was still able to post 10 hits and 8 runs against subpar Cubs pitching – which is what we should expect from this team.

Outside of Tyler Mahle, Wade Miley has been the most consistent starter for the Reds in the first month of the season. Miley continued to be solid for the Reds tonight, but was removed at the right time, as he was hit hard throughout the night.

Kris Bryant opened the scoring for the Cubs in the bottom of the first, drilling a 100.8 MPH home run to left field. Miley would get out of the inning with two soft ground balls, but open the second by allowing a 96.7 MPH single from Matt Duffy, then a 106 MPH double from Marisnick. Duffy would later score on a 104.8 MPH groundout by Nico Hoerner.

The Cubs started the third with a double from Willson Contreras and a walk from Bryant, but Miley was able to wiggle out of trouble, forcing two soft groundouts and getting a strikeout. Despite going 1-2-3 in the fifth inning, Bote (105.1 MPH) and Hoerner (97.7 MPH) made hard contact. In Miley’s fifth and final inning, he once again worked around trouble. Contreras hit a 111 MPH single and Anthony Rizzo walked, but the inning ended on a 98.6 MPH groundout from Javier Baez.

Miley kept the Reds in the drivers seat, as they led 7-2 when he exited the game. He allowed just 5 hits and 2 walks over his 5 innings, but there were 9 hard-hit balls by the Cubs.

Jose De Leon worked a scoreless sixth inning, only allowing a soft single to Bote. Hoerner and Duffy both had 96+ MPH fly outs in the inning, though. The problem of leadoff walks continued in the seventh, as De Leon issued a free pass to Eric Sogard. Two batters later, Bryant smoked a 105.9 MPH, RBI double to cut the lead to 8-3. He then scored on a 102.5 MPH single from Bryant. Leading 8-4 after the seventh, De Leon exited the game having allowed two runs and four hard-hit balls over two innings.

David Bell handed the ball to Carson Fulmer for the eighth inning, and Fulmer worked a clean inning. Bote reached on a 104 MPH single to right field, but then ran himself into an out after Tucker Barnhart picked a ball in the dirt, catching Bote in a rundown.

Sogard reached base again with a single leading off the ninth, and after Fulmer walked Tony Wolters, Bell called upon Lucas Sims to finish the game. Sims had some tough luck with the strike zone, walking Bryant before getting a fly out from Rizzo. With the bases still loaded, Javier Baez hit a long sac fly to left field, cutting the lead to 8-5. Jason Heyward entered as a pinch hitter and subsequently walked, as did Jake Marisnick, which allowed another run to score.

With the game hanging in the balance, and Sims throwing 20+ pitches, Bell turned to Tejay Antone to close the door. Despite facing a bases loaded situation, Antone got two called strikes and then a groundout from Bote, ending the game and earning him his first career save.

The Reds look to take the series on Saturday, as Luis Castillo faces off with Zach Davies at 4:10 EST at Great American Ballpark.