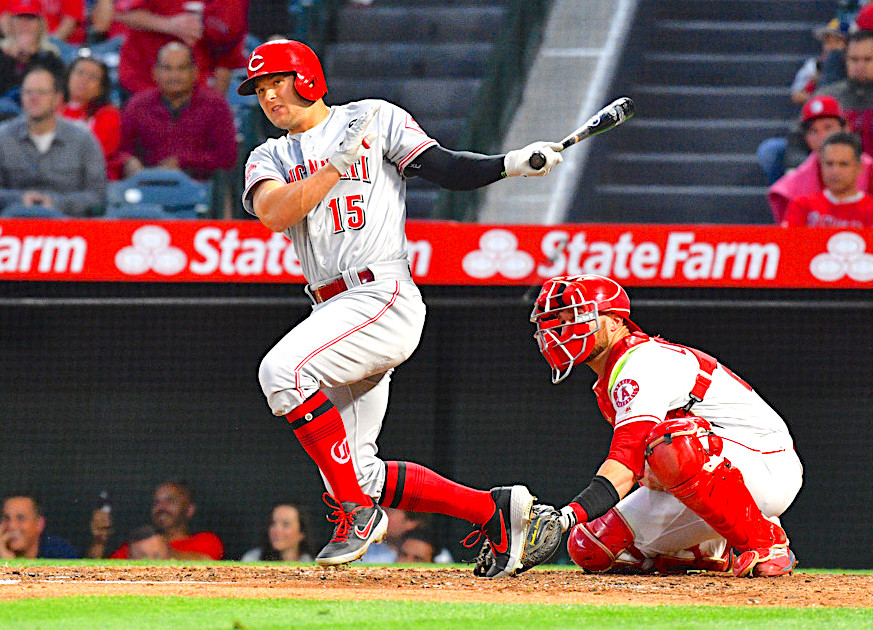 As any Reds fan could tell you, this performance stands in stark contrast to the team’s 2020 woeful offensive production. That Reds unit hit .212/.312/.403 with a run creation score of 91, nine percent worse than average.

It’s pointless to make predictions about the rest of 2021 based on the first six games. The sample size is too small. The Pirates are not a typical team.

What we can do with data right now is look backward. Instead of using it to say what the Reds will be, or even what the Reds are, we can describe what the Reds have been. They are unlikely to keep batting .316. But it’s still interesting to pick apart the numbers to discern what’s caused the Reds 2021 to diverge from 2020.

The hits keep on falling

Batting Average on Balls In Play (BABIP) is a stat calculated like old-fashioned Batting Average. The only difference is that BABIP excludes strikeouts, walks and home runs. It measures the percentage of the balls an individual batter or team hits — that the opposing team can turn into outs — that become base hits.

The Reds BABIP in 2020 was 24.5%. In 2021, that number has been 35.4%. That’s a 109-point difference. If you’ve watched the first six games, you’ve seen the dribblers sneak through, the bloop hits fall and the late swings foil shifts. We’ve joked about it. The way the Reds luck ran last year, none of those would have been hits.

But BABIP isn’t just about luck. The opposing defense matters. So does hitting contact quality. But luck is an element, more than most fans want to acknowledge. It’s more fun to believe our favorite player can aim a ground ball between two infielders or deliberately shoot a line drive in an outfield gap.

So how do we tease out what’s luck from what’s skill? The stat “expected batting average” can help.

An individual batter or team’s expected batting average (xBA) is what batting average should be given the actual batted balls, but with average defense, ballpark dimensions and luck. It takes every actual batted ball and, based on its exit velocity and launch angle, figures out what the typical outcome for that kind of hit has been across the major leagues. For example, it takes every ball hit at 10º launch angle (LA) and 86 mph exit velocity (EV) and sees how many of those turned into hits. Then when Nick Senzel hits a ball with a 10º LA and 86 mph EV, you put that percentage in his xBA.

In other words, xBA comes up with the number of hits a batter deserves based on the typical outcome of his batted balls instead of the actual outcome. It neutralizes defense, park and luck.

In 2020, the Reds expected batting average (xBA) was .231. Their actual batting average was .212. That means their outcome was 19 points worse than it should have been based on how well they hit the ball. They were roughly 19 points unlucky.

We can conclude about a third of the batting average difference between the 2020 and 2021 Reds has been due to luck related to where the ball lands.

More than luck has been at play in the Reds start. The team’s 2021 xBA of .298, which is the highest in the major leagues, is 67 points higher than the xBA of the 2020 Reds. Even ruling out those grounders and bloops that have found a way, the Reds have hit much better so far in 2021.

Some have credited the team adopting a new hitting approach. It’s been characterized as hitting more line drives and being more patient at the plate. It’s in contrast to hitting with higher launch angles for home runs and lacking plate discipline.

Does data back up the “new approach” claim?

Again, the sample size on this is limited and not representative. And that cuts both ways. There is an equally small sample for any hypothetical proof of a new approach. But here is what we’ve seen so far.

If the 2021 Reds have been swinging for fewer home runs and for more line drives, you would expect the team’s average launch angle on batted balls to be lower. In fact, the 2021 Reds are hitting at a higher angle.

With a new approach of just putting the ball in play, you would expect fewer balls hit into the outfield to turn into home runs. But the opposite has happened, the Reds have been substantially more effective at hitting home runs.

With a new, don’t put the ball in the air, approach, you would expect far fewer fly balls hit. But that hasn’t happened, either. Here is the actual data:

Launch angle up. Home runs up. Fly balls about the same.

We’ve also heard the Reds are showing more patience at the plate. Has that been true?

Another important factor to consider in figuring out what the Reds are doing different in 2021 is the team’s new players.

The at bats that went in 2020 to Freddy Galvis, Shogo Akiyama and Curt Casali have largely been taken by Jonathan India, Tyler Naquin and Tyler Stephenson. Those three players from 2020 had an xBA of .221, while the latter three have an xBA of .308 in 2021. Galvis, Akiyama and Casali hit with an average exit velocity of 86 mph while the 2021 crew has averaged 93 mph.

Part of the 2021 offensive surge is due to certain players replacing other specific players in the lineup. That gap may not last, but it’s been real and big for the first six games.

The “Reds have a new approach” narrative has taken off, in part, because it has been referenced often in the TV broadcast. We hear it every time a Reds player hits a line drive, gets a base hit or draws a walk.

That’s an example of confirmation bias. Confirmation bias is our tendency to interpret new evidence as confirmation of our existing beliefs. Similarly, we remember details in ways that favor our current theory. Part of the bias is to ignore data that doesn’t fit.

Examples include: Jonathan India hits a ground ball into an open area and we’re told “see, that’s our new approach” or a Mike Moustakas hit falls into play and we hear “that’s what happens when you don’t swing for the fences.” The Reds are leading the major leagues in home runs. Amid that onslaught of four-baggers, we’re told to give importance to a bloop single.

Several factors are behind the Reds early, great offensive numbers. New hitters, Pirates pitchers, better luck and hitting the ball harder have all contributed. On that last  point, the Reds have an average exit velocity of 89.2 mph, which is a bit above the 87.9 mph last year.

Is it possible Reds batters have adopted a new plate approach that’s helping?

It’s too early to tell either way. But it’s accurate to say there is no evidence of it so far in places where you might expect to see it. There’s no lower launch angle or more patience at the plate to be found. If anything, the data supports the Reds are trying to hit more home runs — and succeeding in spectacular manner. Although again, there isn’t enough of a sample to support that.

Beside just flat out getting it wrong, confirmation bias about a new hitting approach means we dismiss other important information — the small, specific changes made by individual players that could be making a difference. Joey Votto standing more upright in the box. Nick Senzel closing his stance. Tucker Barnhart giving up switch hitting. Tyler Naquin and Jonathan India putting on Reds uniforms. The one-size-fits-all narratives are too-easy shortcuts. Those details are the good stuff.

The welcome news is that a mountain of data is collected and assembled from every game. We can dig into it until an accurate picture emerges. And all that information is easily available to the public.

The numbers tell an interesting story. thanks Steve. It has been a fun start to the season.
Nice to see Naquin fulfilling some of the projections (small sample) from earlier in his career. He is very interesting player; speed, power, all three outfield positions, high draft pick so he has pedigree. Went back and read the player profile on him and he (like most on the team) is defiantly exceeding expectations. I love how your team breaks the numbers down for fans like me who want to understand the numbers better. Appreciate what you do here.

Thanks. The Reds have been exciting and overachieving. Yet almost every team who ends up winning does so because they have great stretches. Maybe this is ours.

Very interesting. And fun to be on the ‘lucky’ end of the BABIP train (for a week, anyway). Thanks, Steve. Great stuff that I love reading.

Thanks for the nice words and your long-time support.