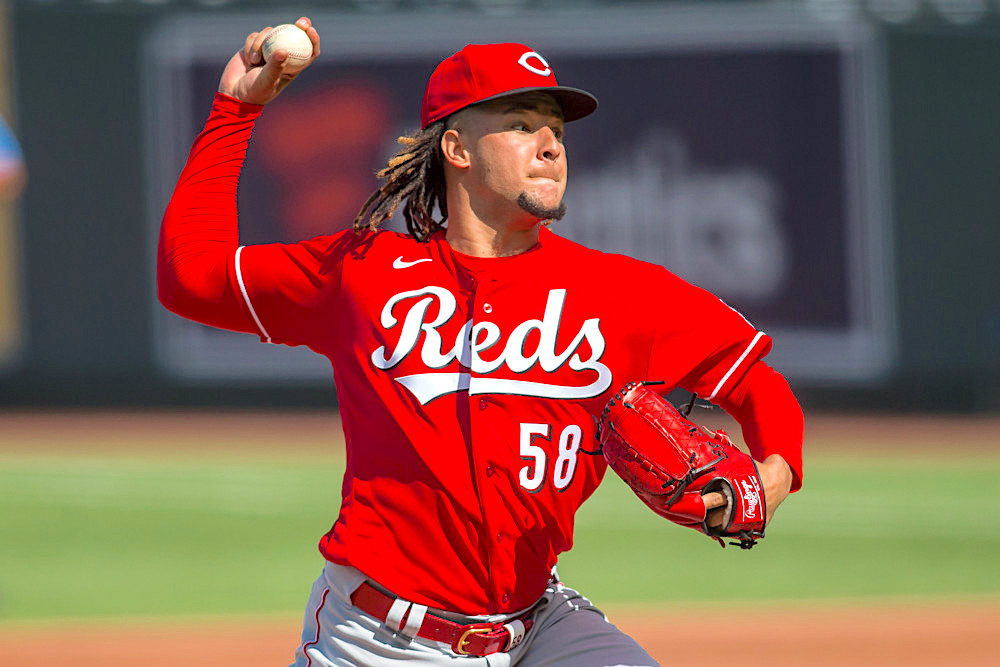 The Cy Young Award is given every season to the best pitcher in each league. It’s named for the Hall of Famer who won 511 games — almost 100 more than any other — and threw three no-hitters. The award is voted on and has been presented by the Baseball Writers Association of America since 1956. Roger Clemens has won seven times, the most of any player.

The Reds organization went a long time — 64 seasons — before one of its pitchers won the Cy Young. Trevor Bauer, who was an award-winner last year, was the first.

Wouldn’t it be something if the gap between the first and second winner was 12 months?

Bauer moved on through free agency to the Dodgers. But the Reds have another starter who might have the stuff to follow on with another Cy Young. And that’s Luis Castillo.

Why do we think Luis Castillo can win the N.L. Cy Young Award?

Let’s start with all-important fundamentals. These are the outcomes over which pitchers have the most control, without influence by either offense, his defense or bullpen. They are strikeouts, walks and ground balls. Nothing new-fangled. The first set of Topps baseball cards that carried statistics (1952) includes strikeouts and walks on pitcher cards. The three stats have proven to be powerful predictors of future performance from year-to-year.

Castillo has an elite strikeout rate (30.5%). As Reds pitching coach Derek Johnson has said, swing-and-miss doesn’t lie. If the batter doesn’t put the ball in play, there’s no risk of bad outcomes. Not only did Castillo rank in the top 12 of starters in K% last year, but his rate has risen every season, raising hope for further improvement. 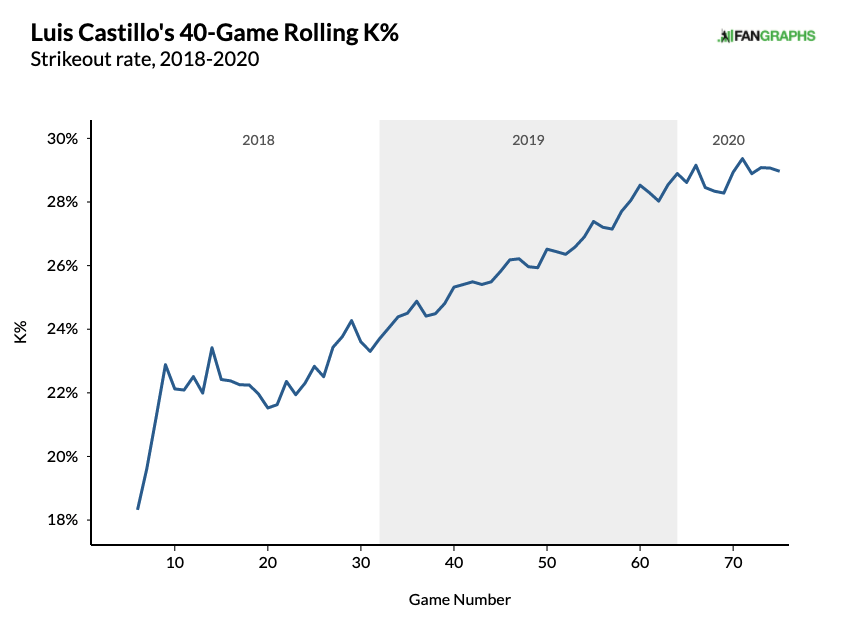 As you would expect, Castillo’s Swinging-Strike rate (percent of total pitches the batter swings and misses) and his Whiff rate (percent of swings the batter misses) track with his strong K% numbers. Among qualified pitchers, he ranked fifth in the former (15.4%) and 11th in the latter (32.7%).

Castillo’s walk rate (8.2%) has stabilized. Walks are a good measure of a pitcher’s control. After a troubling BB% spike in the first half of 2019, Castillo has settled down and produced a walk rate below league average for starting pitchers.

Castillo has an elite ground ball rate (58.4%). Major league average for starters is 43%. Ground ball outcomes are well suited for today’s game and not just in Castillo’s home ballpark. They never go for home runs. Plus, with the growing use of defensive shifts, ground balls are more likely to be converted into outs. The Batting Average on Balls In Play (BABIP) for grounders has been falling across the league, from .249 (2017) to .237 (2020). On top of all that good news, Castillo’s ground-ball rate is still trending up. 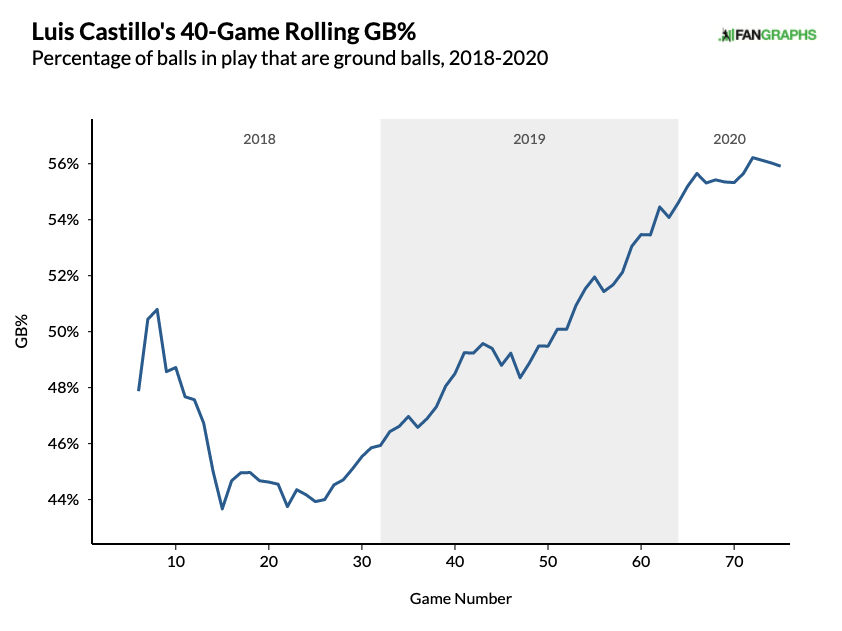 Let’s look under the hood at Luis Castillo’s pitches. Castillo has a four-pitch portfolio.

Castillo’s fastball clocked in at an average of 97.5 mph last year. That was the 2nd-highest speed among qualified major league starters, behind only two-time Cy Young winner Jacob deGrom’s 98.6 mph. Most pitchers lose fastball velocity as they age, but under Derek Johnson, Kyle Boddy and their staffs, Castillo has found more mph each season: 95.8 mph (2018), 96.4 mph (2019) and 97.4 mph (2020).

In what seems like an important development, Castillo has started throwing his four-seam fastball up in the zone, resulting in more swings-and-misses. Compare his 2019 fastball location (left) to 2020 (right). 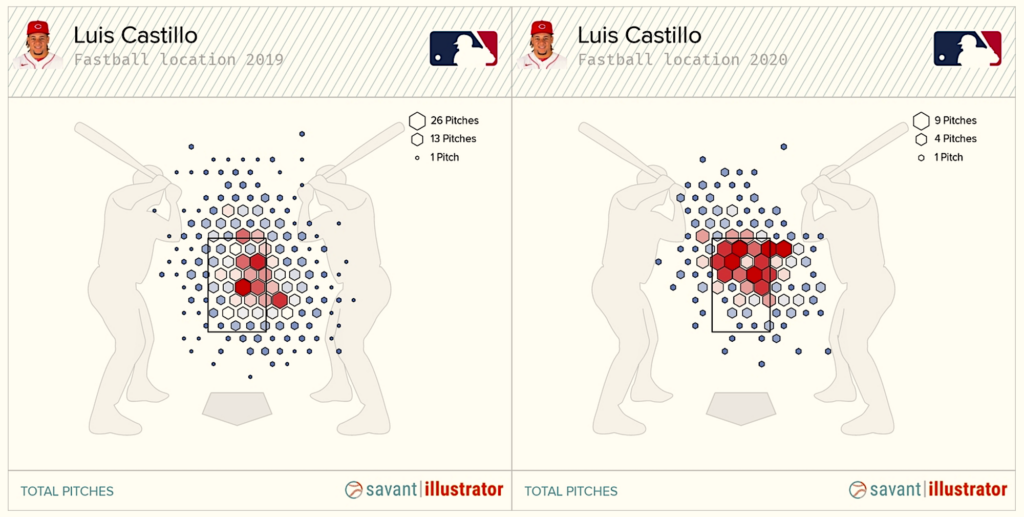 Castillo doesn’t have the high-spin fastball that typically succeeds up in the zone, but his velocity is more than enough to elicit swings and misses. The whiff rate on Castillo’s four-seamer jumped by nearly 10 percentage points, from 27.5% in 2019 to 37.2% in 2020. Among starting pitchers who had at least 100 swings against their four-seam fastballs, no one — not even Jacob deGrom — had a higher whiff rate.

The sinker, which clocks in at the same speed as his four-seamer (97.5), is Castillo’s best ground-ball pitch. Over the last two seasons, he’s generated a ground ball roughly 66% of the time the pitch is put into play.

Castillo’s changeup has always been his most devastating pitch. It has a 40+% whiff rate and also generates a lot of Castillo’s ground balls (57%). He uses it heavily against hitters on both sides of the plate, and to particularly great effect against left-handed batters down and away to get outs.

Making his changeup even better is that it looks eerily similar to his sinker. He tunnels the pitches by using them in the same part of the zone.

The difference? His changeup drops 10 inches more than his sinker, resulting in swings and misses. Here’s how it looks in practice:

There are so many examples of Luis Castillo making batters look foolish on his changeup it’s hard to choose. The victims list has to be led by Miguel Cabrera, who Castillo struck out on his changeup FIVE times in his first two starts of 2020. Here’s another one of the five.

In another example, Castillo’s changeup induces a soft grounder against Eddie Rosario.

Perhaps the biggest improvement in Castillo’s portfolio has been the development of his fourth pitch, a slider. Matt wrote a detailed analysis of Castillo’s slider before the 2020 season.

So how did Castillo do with his slider in 2020? In a word, it was brilliant. Castillo continued to ramp up his slider’s spin rate. That’s no surprise given the emphasis his coaching staff puts on that metric, but Castillo’s gains in slider spin have been phenomenal. 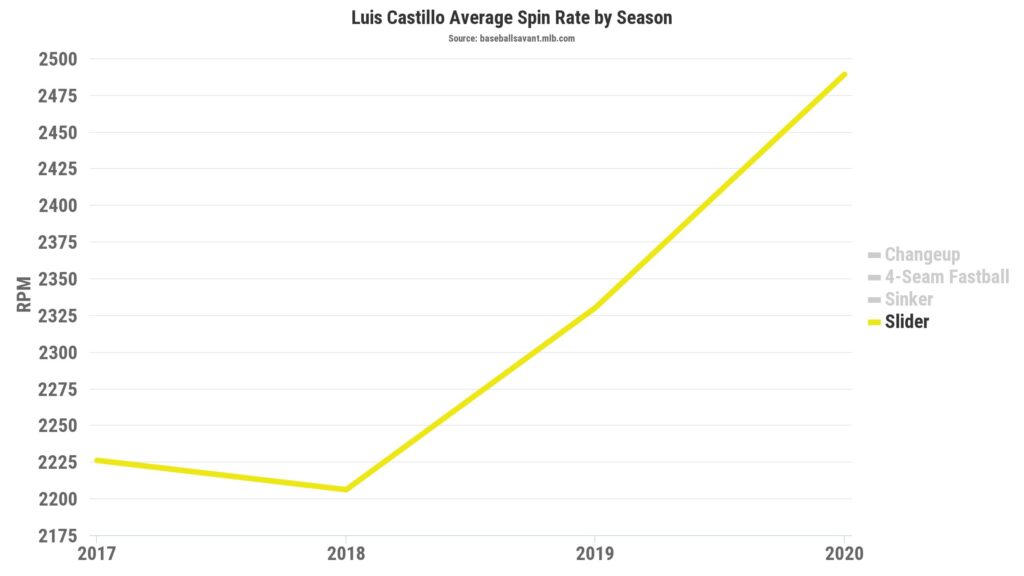 Because Castillo throws more of a gyro-slider, that spin doesn’t lead to a ton of movement, but it does get results. Last year, it resulted in a negative run value (negative is good) on his slider for the first time in his career. Castillo’s GB% increased from 56% to 60%. His xwOBA fell from .295 to a super-low .179. His whiff rate fell a bit, from 47.1% to 42.3%, but was still well above average.

To see how much it has improved, compared the location where he threw it to RH batters in 2018 (left) compared to 2020 (right). 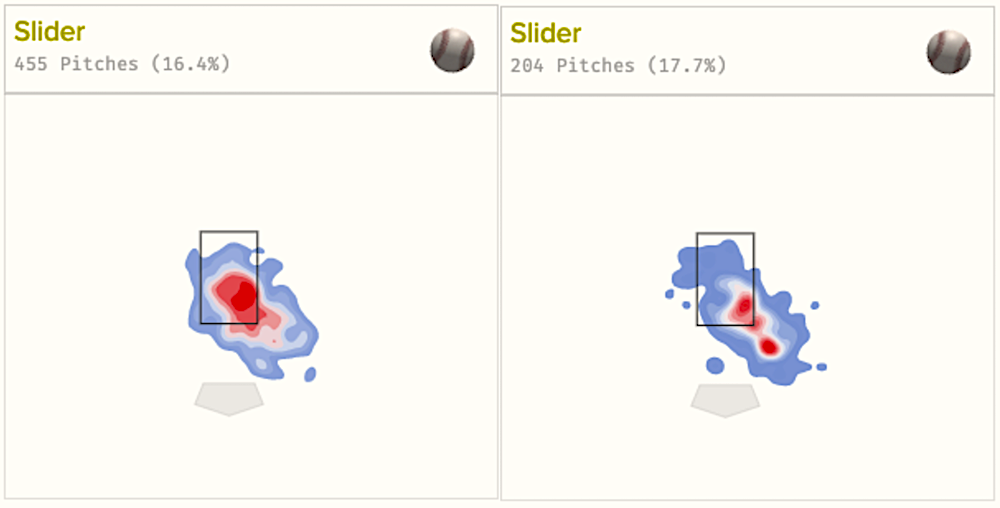 Additionally, Castillo grew a little more comfortable throwing the slider against lefties, increasing its usage from 9.7% to 12.8%. This could be one way he prevents them from sitting on his changeup with two strikes.

The 2021 season is set up for Luis Castillo. The important indicators are pointing in the right direction. Castillo’s fastball is getting faster. His changeup is more lethal. Castillo’s slider has become an effective pitch. Batters are making less contact off Castillo and when they do, hitting it with less velocity. He’s been healthy and has another year of experience. He’s thriving under the tutelage of Derek Johnson. And he’s still just 28 years old, right in the prime of his career.

The National League is full of incredible pitchers, from Max Scherzer, Yu Darvish and Jacob deGrom to practically every member of the Dodgers’ staff, including Clayton Kershaw, Walker Buehler and Bauer. The competition is fierce.

But Luis Castillo improved from 2018 to 2019 and again in 2020. If that trend continues, we could be looking at back-to-back National League Cy Young winners in a Cincinnati Reds uniform.

The 13 pitches that ruined our Opening Day – Reds Content Plus

[…] the Cardinals even. The Reds were sending ace Luis Castillo to the mound! I had read – just yesterday! – that Castillo could win the N.L. Cy Young […]