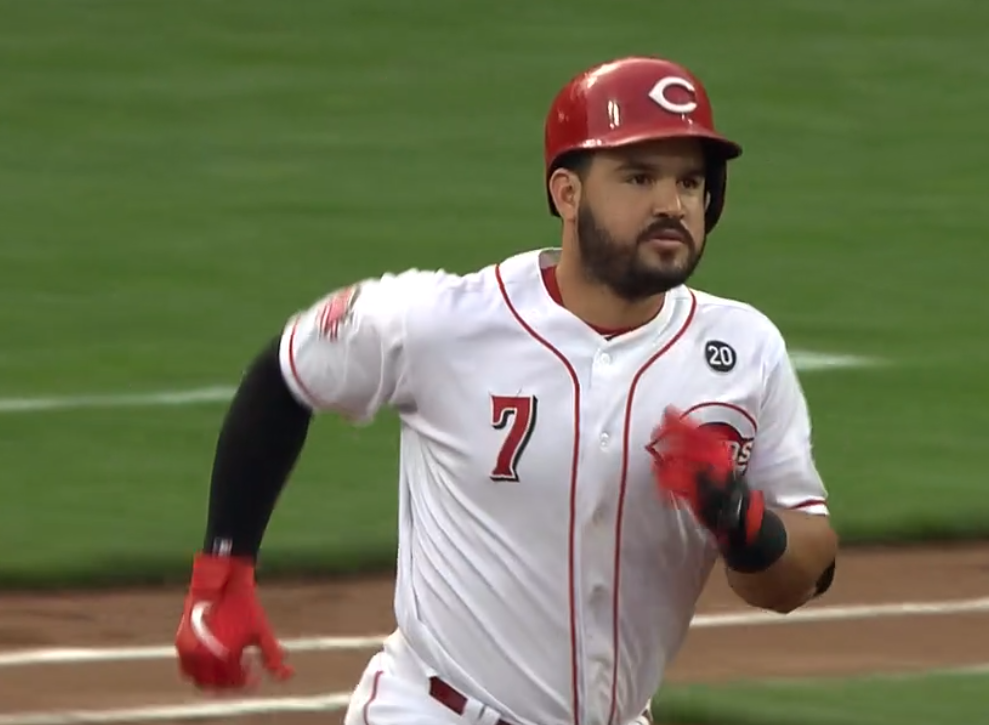 Chris Welsh began the broadcast remarking that while it may be intimidating for a young starter like Tyler Mahle to go up against Max Scherzer, it will be the Nationals hitters he faces- not Scherzer, and he should focus solely on them. That’s exactly what he did this evening with impressive fastball command and tailing sliders, inducing weak contact throughout his start.

Leadoff hitter Eugenio Suarez (more on that below) provided insurance in the 6th inning with a majestic home run to right, which felt like 10 runs once the not so secret weapon Tejay Antone entered the game in the following half inning.

This game was an unlikely win for the Reds considering they had lost 6 of 7 coming in and the Nationals had won 4 of 5 and had Scherzer on their side. They have 5 games remaining on the short road trip and hope to see some carryover from Suarez and the pitching staff.

The Reds knew they would have their work cut out for them tonight facing 3-time Cy Young award winner Max Scherzer. He totally looked the part in the first 2 innings, pinpointing his fastball on the black and throwing nasty off-speed to the tune of 9 swing and misses by Reds hitters. A fly ball to left by the scorching hot Jesse Winker was the only ball hit out of the infield.

This would change in the top of the 3rd when Kyle Farmer pulled a 4-seam fastball down the left field line for a solo home run (99 mph exit velo, 375 ft) to give the Reds a 1-0 lead. While Scherzer’s fastball is largely responsible for the nearly 3000 strikeouts in his career, he is not afraid to challenge hitters with the pitch, especially with the bases empty- it was the 5th solo home run given up on his 4-seamer this season.

With one out in the top of the 4th, the Reds right handed hitting MVP candidate, Nick Castellanos, short hopped a 103.7 mph rocket off the wall for a double, and advanced to third on an error as Kyle Schwarber misplayed the ball in left. It was a heads-up play to get 90 feet away from scoring with one out by the Reds best base runner according to Fangraphs BsR, one of the lone bright spots on the base paths for the Reds this season. It ultimately did not matter for the Reds as both Tylers, Naquin and Stephenson, were dismantled by Scherzer fastballs and change ups respectively.

The Reds threatened again in the 5th when the bottom of the lineup came to the plate. A sharp Tucker Barnhart single (.910 xBA) lined through the shift in right and a Jonathan India walk had the Reds with a runner in scoring position. Tyler Mahle quickly bounced into a double play to end the inning.

Pregame David Bell mentioned he was “doing anything he could to get Suarez going” when discussing the decision to hit Geno leadoff for the first time in his Reds career. Whether it was pushing the right managerial buttons, seeing better pitches with 2 potential MVPs behind him, or just plain ol’ baseball, Suarez made an impact from the leadoff spot in the top of the 6th. He clubbed a Scherzer changeup opposite field (390 ft, 105.4 mph) for a solo shot to right-center, and it was Good Vibes Only all throughout the Reds dugout. Obviously the Reds are looking for more than one good at bat for their cornerstone 3B, but given the circumstances of who was on the mound and the lineup tinkering by Bell, Reds fans are hopeful there is more of this Suarez to come.

The Reds threatened in the 9th after a leadoff Castellanos bloop single and Tyler Naquin walk gave them 1st and 2nd with no outs. Recently called up Scott Heineman rolled into a double play and Tucker Barnhart struck out to end the inning, and leave the game in Amir Garrett’s hands.

Tyler Mahle has had some trouble going deep into games this season, often times because of high pitch counts in early innings. It looked as if that would be the case again this evening when the first three batters worked full counts against him, and he ultimately ended up walking one in a 20 pitch inning. He tends to nibble at the corners rather than attacking hitters with strikes in the zone, although to the Nationals’ credit their hitters were impressively taking pitches just off the plate. Tonight Mahle quickly reversed course pumping strikes to the middle and bottom of the Nationals lineup, especially in 13 pitch 2nd and 3rd innings. He surrendered only the one baserunner on a walk in the first and allowed no hits the first time through the lineup.

Mahle allowed a single to Josh Bell in the top of the 4th, but quickly recovered to retire the next two hitters. He continued attacking the heart of the Nationals lineup, and stood at 66 pitches after four innings.

In the top of the 6th with one out, a soft Juan Soto flare fell in for a single and Mahle’s day was done after 94 pitches including just 3 hits and one walk. He was pitching well overall, but David Bell’s hook was rewarded by Captain Hook himself, as Tejay Antone got the Reds out of the inning with just one pitch- a double play.

Tip of the cap to Tyler Mahle! pic.twitter.com/lRXNrMW4yF

Antone was his usual self in the 7th inning, setting up Schwarber with curveballs and eventually blowing a 97.6 mph fastball up in the zone by him for a strikeout. He retired the next 2 hitters as well for a clean 1 2 3 inning, working his curveball to near perfection. Although he did allow a baserunner in the 8th, his curveball seemed to get even better, with vertical breaks consistently over 50 inches. He eventually struck out Trae Turner with a filthy slider, fooling him with a pitch that was nowhere near the plate. Antone was done after 33 pitches, turning the game over to Amir Garrett to close out the game.

It was the first save opportunity in a month for Amir Garrett, and he would be due to face the Nationals 2-3-4. Leftys are hitting .172 against AG, and he struck out 2020 batting champ Juan Soto with a fastball positioned perfectly down and away. The issue for Garrett was that the next batter, Josh Bell, is a righty. He grooved a 3-2 fastball right down broadway that Bell to sent over the LF fence and put  the Nationals on the scoreboard. With the Reds still leading 2-1, Garrett retired the right handed hitting Ryan Zimmerman for the 2nd out in the inning.

Garrett was pulled for Lucas Sims with the righty Starling Castro up next after facing the minimum of 3 batters. Garrett has seemed to round back to his 2020 form against left handed hitters, but will need to figure things out against right handers if he wants to keep pitching in high leverage situations.

Sims calmly got Castro to groundout to third for the final out, sealing a 2-1 Reds victory.

The Reds play game 2 of the series with another night game in the nation’s capital. First pitch is at 7:05 p.m. EST as Jeff Hoffman faces off against Joe Ross.

Is this the game where Geno unlocks his offense?

Great to see Geno with an oppo taco. If he can get going and we can get healthy this division is still open for the taking.

Geno moving up in the lineup to be the lead off hitter was awesome. Even though he’s been in a slump this year, nice to see him hit a dinger, especially against one of the best pitchers in baseball

Kevin Who Dey
Reply to  Chri

Chri
Reply to  Kevin Who Dey

I was excited before the game to see Suarez moved to the leadoff spot. It might not work out and either way I think it’s temporary, but it could be just what the doctor ordered.

Hitters are very attached to the idea that their “job” as a hitter depends on where they hit in the lineup. The job of the 4-5 hitters is to hit HRs and drive in runs, the job of the leadoff hitter is to get on base. (I’m not claiming this is completely irrational, you do like to see these things). But Suarez’ most obvious problem is that he’s trying to hit HRs. I’m sure he’s been made aware many times that this isn’t a good approach, but when he slumps he can’t help himself. A key thing that Bell said about his batting leadoff: “He’s going to have an opportunity to become a baserunner.” That’s the whole thing, convince Geno that his job is to get on base. I’m looking forward to seeing what he does with that approach.

I have noticed in past years that when a single can win a game late, he has altered his approach. (Sorry no numbers to back that up.) Even when he’s slumping, in the past I’ve never dreaded seeing him at bat in those situations. Of course he’s often been struck out by good pitches, but he does try harder to just make solid contact.

I’ve continued to think the lineup spot wasn’t the issue for Geno this year, it was extra focus on the fielding aspect of playing SS. I’d like to see him play 3B and then wherever Bell wants to put him in the order is fine with me.

Suggestion: how about unluckiest out of the day by both teams ?

That’s definitely something to incorporate moving forward! I only include the unluckiest out by the Reds usually so I agree it would be cool to see both teams.

I like it that Vladimir Gutierrez will get the start on Friday.