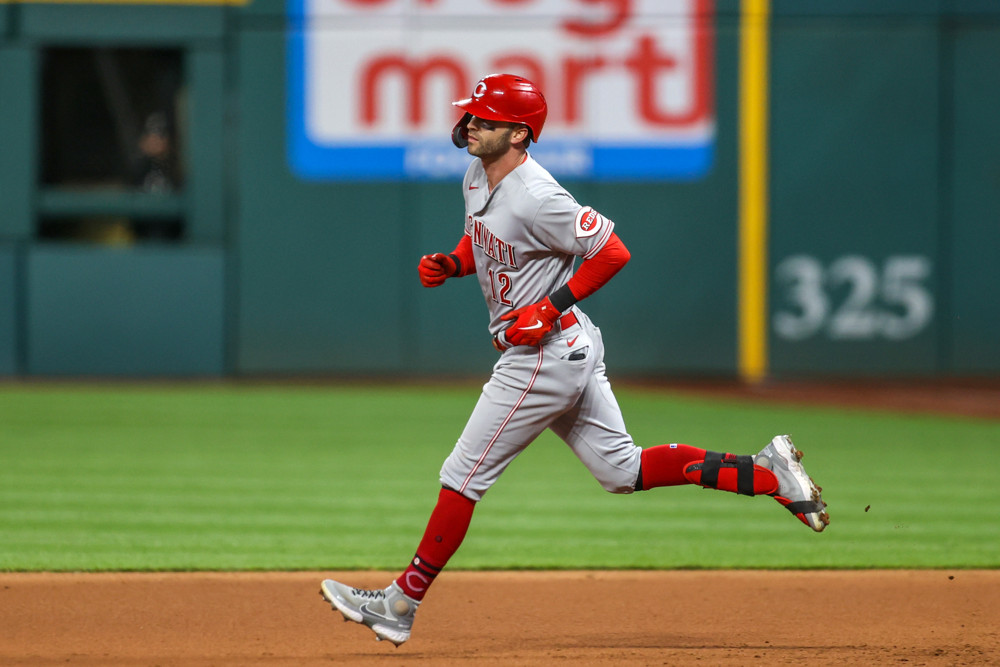 The Reds had to put off their hopes of taking the Ohio Cup from the Indians yesterday as the game was rained out and rescheduled to August 9th, with the most recent edition of the season series tied 1-1. An off day in the midst of the longest road trip of the season could have been just what the doctor ordered for a struggling Reds road offense, which exploded for 14 runs against an undermanned Pirates team who has the worst run differential in the National League. Every Reds starter notched at least one hit as the Reds have now outscored the Pirates 44-9 on the year.

The Reds are up 14-1 and everyone in the starting 9 has a hit. pic.twitter.com/Fai63brHNZ

The Reds offense came out aggressive against Mitch Keller and went down quietly in a six pitch 1-2-3 first inning. However, in the top of the second inning, the “tiger striped” Eugenio Suarez barreled a loud home run to right-center (380 ft, 103.3 mph exit velo), his sixth of the season. It was a welcomed sight for Reds fans who have been waiting for their franchise 3rd baseman (yes, 3rd baseman) to break out at any moment, and in this moment he gave them a 1-0 lead.

You really just never know what you're gonna get during Reds pregame Zoom interviews. 😜 pic.twitter.com/avNTu4H18K

You know the vibes. pic.twitter.com/yydGmdMTh9

In the top of the fourth inning, the Reds’ early count swinging strategy paid off. In their first at-bats, Jesse Winker and Mike Moustakas both put balls in play for outs on the first pitch. This time, they were rewarded with hits. Winker blooped a first-pitch single to center, and Moose singled him home (after a Nick Castellanos walk advanced Winker to 2nd) on a hard-hit ball to left center. Tyler Naquin followed by smashing a double down the right field line, bringing Castellanos across the plate to give the Reds a 3-1 lead. After a Suarez flyout, the major league leading Reds catchers continued to produce both behind and at the plate. This time it was Tucker Barnhart crushing a 389-foot double to the deepest part of the ballpark, which brought Moose and Naquin home. A first-pitch single from Farmer and a walk to Mahle ended the day for Keller, leaving the game after 65 pitches, a 5-1 deficit, and the bases loaded with one out.

The only Reds starter who hadn’t seen an at-bat in the inning, Nick Senzel, kept the rally going with an impressive single to right center, scoring Barnhart and Farmer to give the Reds a 7-1 lead.

But do you 𝙧𝙚𝙖𝙡𝙡𝙮 know the vibes? pic.twitter.com/2dVatknYkn

The Reds added another run in the top of the sixth when a red-hot Barnhart led off with a double to right. After a Kyle Farmer single through the left side of the infield, Tyler Mahle avoided a double play and legged out a fielder’s choice to score Barnhart. The Reds were nowhere near done putting crooked numbers on the scoreboard, though, as Jesse Winker led off the top of the seventh inning with a double off the bottom of the wall in right which appeared like it could not have been hit more flush (101.2 mph exit velocity). Moustakas and Naquin disagreed. After a 108-mph single by Moose (hit so hard to right that Winker was unable to score), Naquin doinked a 106.0-mph missle off the foul pole in right — a ball that may have ended up in the river if the foul pole wasn’t there to break its flight. The three-run home run was Naquin’s eighth of the year and fourth against the Pirates this season, and it gave the Reds an 11-1 lead.

Tough night to be a foul pole. pic.twitter.com/bzzmIZ5382

The rout continued in the top of the eighth, after Farmer and Alex Blandino walked. Senzel then stroked a double to right, scoring Blandino to give the Reds a 12-1 lead. This was another multi-hit game for Senzel in the leadoff spot, where he’s 9-for-23 on the season, the most hits in  any spot in the lineup for him. Then, the Reds’ only starter to not have a hit joined in on the party, when Castellanos shot a double down the first-base line scoring Senzel and Farmer to put the Reds up 14-1.

Tyler Mahle looked to bounce back from his worst start of the season against the Cubs on May 2, a game the Reds eventually won 13-12 in 10 innings. He gave up three home runs in five innings after allowing only two home runs combined in the rest of his starts this season. He once again gave up an early long ball, a slider left hanging to catcher Jacob Stallings on the first pitch of the bottom of the 2nd inning. That leveled the game at 1 after the Suarez bomb in the top half in the inning.

Mahle struggled with control the first two times through the order. After the bottom of the third inning, he had walked four batters. But he stepped up when it mattered most with a bases-loaded strikeout against Stallings, the same batter who took him yard just an inning earlier. Mahle set up Stallings with effective sliders dropping out of the zone, then froze him with a 95-mph fastball at the knees.

With a 7-1 lead, Mahle, locked in during the fourth inning. His fastball velocity was increasing as the game went on, and he was consistently throwing his breaking ball for strikes, which allowed him to get ahead of hitters. 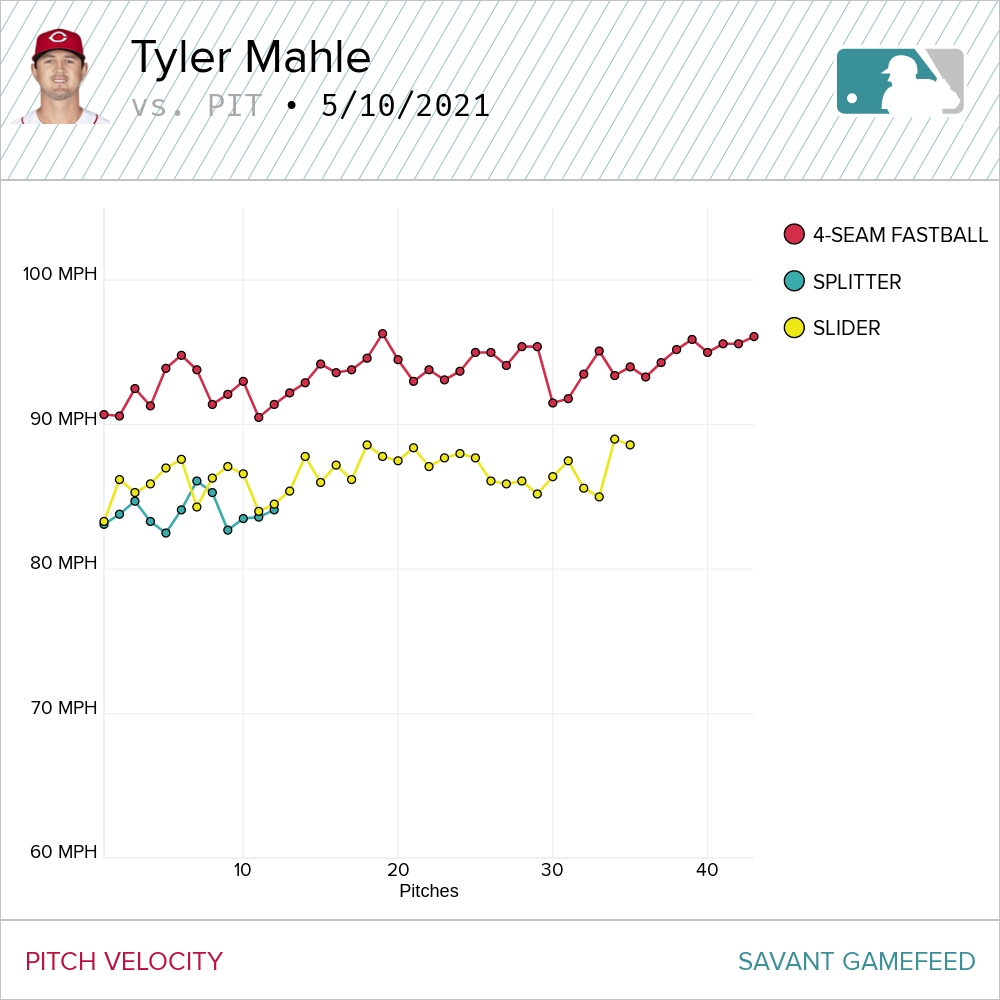 After a soft bloop to Bryan Reynolds and a single to the hottest batter in the Pirates lineup, Adam Frazier (11 game hitting-streak), Mahle got a strikeout to the #3 hitter Ka’ai Tom on a 95.9 mph heater. His 90th pitch of the night induced a groundout to end the fifth inning. After facing one batter and getting a flyout in the 6th, Mahle was pulled after 96 pitches, which included four walks, seven strikeouts and one earned run. After missing his spots in the early innings, Mahle settled in nicely to overmatch the Pirates.

Heath Hembree came in to relieve Mahle, finishing the sixth with a strikeout on a nasty slider tailing away from the right-handed hitting Troy Stokes. Hembree retired another batter in the top of the seventh to complete the three batter minimum before Amir Garrett came in and struck out the next two batters he faced. Garrett threw all four fastballs that inning for strikes, seemingly in control and confident with a pitch he has been unable to miss bats and locate with thus far in 2021.

Garrett remained in for one more inning, walking a batter and striking out one more. It was important to see Garrett pitch well regardless of situation, with well documented early season struggles but also a suspension looming (the 7-game suspension is currently under appeal). Overall, AG hasn’t allowed a run in his last four innings of work. Sal Romano pitched an 11-pitch ninth to close down the game, and the Reds bullpen was able to save some of their top relievers for the rest of the series.

Tomorrow the Reds move on to game two of the series in Pittsburgh as Jeff Hoffman faces off against J.T. Brubaker. First pitch is at 6:35 p.m. EST.

I had no idea people tracked RPM on pitches

Super cool right- that’s why they call it #Spincinnati. Take a look at some of the leaders in spin rate this season

The bats were hot!

Bats were on fire today. Great graphic too

Mouse in the house! Great showing by our boys

Tyler Mahle bounced back like no other – what a performance!