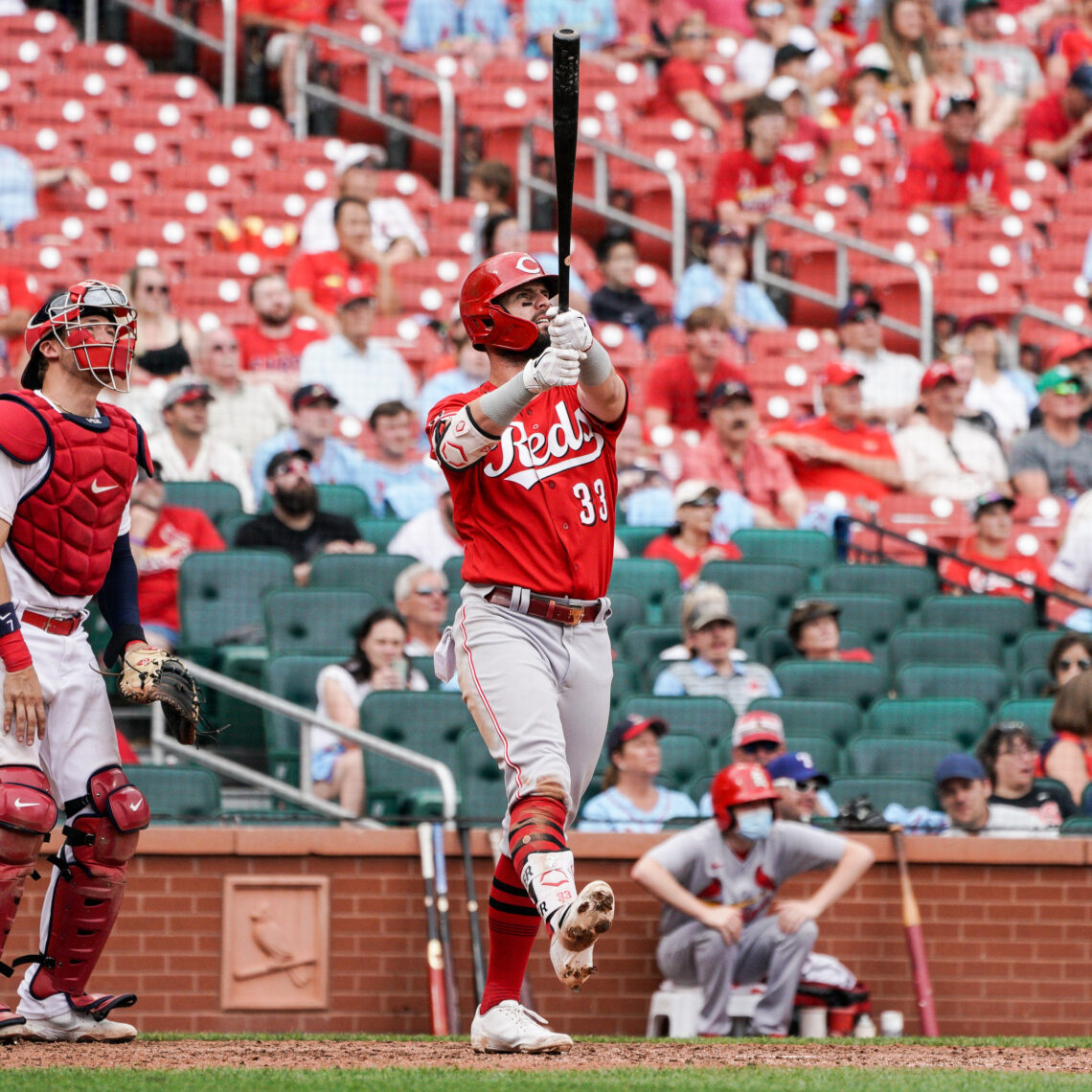 The Reds completed their first four-game sweep in St. Louis since 1990 with a thrilling 8-7 victory on Sunday afternoon. Jesse Winker was the star, with home runs in the first two innings to put the Reds up 5-0, and then a go-ahead solo shot in the top of the 9th to put the Reds ahead for good, 8-7. The game was not without unwelcome drama, as the Reds relinquished a 7-0 lead in the 6th before Winker’s heroics.

The Reds will celebrate the sweep, which gets them within one game of .500 at 28-29. But questions about the bullpen continue to loom large.

The Reds lineup faced John Gant, who came into the day with a 1.60 ERA through 10 starts. However his xERA (expected ERA based on the quality of contact opposing batters make) sat at 5.60, indicating all kinds of luck may be involved and he was due for a regression.

In the top of the 1st, Jesse Winker ensured there would be no luck for Gant this day, when he smashed a two-run home run (433 ft, 105.0 mph) over the right center fence on a Gant slider left over the heart of the plate. It was only the 2nd home run allowed by Gant this season and the first non-solo home run (the scorching hot Jonathan India sat on 1st base after lacing a single up the middle) he allowed since last July.

The Reds continued to threaten top 1st after a Tyler Stephenson walk and Tyler Naquin double down the right field line, but the bad base running bugaboo bit again after a hard Eugenio Suarez grounder to 3rd led to Stephenson getting run down between 3rd and home running on contact, and Naquin thrown out at 2nd after leaning too far off the bag following the Stephenson rundown. It wouldn’t ultimately doom the Reds in this game, but their 28th ranked base running (per Fangraphs BsR) will not cut it for a team trying to make the playoff picture.

Jesse Winker is one homer away from tying his career high… it's only June.

Winker was nowhere near done on the day, as he stepped to the plate with runners on 1st and 2nd and 2 outs after a Tucker Barnhart walk and an India hit by pitch. On an 0-2 count, Gant missed with a fastball on the inner part of the plate and in moment of deja vu, Winker blasted the ball 430 feet to right center just as he did the inning before. At the time, Winker was just one home run off the NL lead with 16 and the Reds led 5-0.

Jesse Winker is currently on pace to hit 9 dingers this game. pic.twitter.com/psj0oKQUOP

The Reds played add-on once again in the top of the third. Shogo Akiyama (who entered the game for Tyler Naquin who left with left hamstring tightness) looped an opposite field single to left and then Stephenson followed with a single of his own. Eugenio Suarez stepped to the plate and sent both runners home with a 103.8 mph double down the left field line. This gave the Reds a 7-0 lead and the brooms were out in St. Louis.

Reds up 7-0 in the third inning mood: pic.twitter.com/hqAi0i20Kq

After a disastrous bottom of the 6th which saw the Cardinals score 7 runs and tie the game, the Reds were unable to get any runs across in the 7th and 8th. With the game deadlocked and needing someone to play hero in the 9th, who other than Jesse Winker would get it done?

With one out and nobody on, again on an 0-2 count Winker launched a curveball 393 feet over the right field fence, delivering what would end up being the game winning home run. The Reds MVP candidate is near the top of the leaderboard in many hitting categories, and is now the National League leader in home runs with 17. The Reds other MVP candidate, Nick Castellanos, saw his MLB season long hitting streak end at 21 games on an 0-4 day.

Running out of words to describe how good this guy is❗️ pic.twitter.com/NXaL77MM8u

As impressive as the Reds early offensive outburst was, Wade Miley made sure the Reds would stay ahead in today’s game by shutting down the Cardinals for 5 innings. He looked to continue momentum from a solid Memorial Day outing against the Phillies which had followed a short stint on the DL with a left foot sprain.

Miley employed a combination of inducing weak contact with his cutter and getting swing and misses off of his changeup. He really hit his stride in the 2nd and 3rd innings, where at one point he struck out three straight hitters, with strikeouts on his fastball, changeup, and cutter. The only inning he ran into trouble was in the bottom of the fourth, where he got out of bases loaded jam on a fielder’s choice groundout to the shortstop, Mike Freeman. All in all, after 92 pitches and 5 innings Miley gave up no runs and struck out 8 hitters, leaving the Reds with a 7-0 lead.

Make sure to tip your Wader. pic.twitter.com/yKPmGwrx7w

Michael Feliz came in in the bottom of the 6th and the wheels began to fall off. Feliz allowed a 2-run home run to cut the lead to 7-2, and then did not record an out while allowing the Cardinals to load the bases. Brad Brach then entered, and Matt Carpenter hit a bases-loaded double on a 3-2 count to bring in 2 of the Cardinals’ runners. The ball grazed off of a running Shogo Akiyama’s glove, which would have been an incredible catch. Efforts like this from Akiyama and later Castellanos in right tracking down long fly balls ultimately helped keep the Reds ahead in this game, even when the bullpen was struggling.

After a walk and Freeman throwing error to bring in another run, Tejay Antone entered with the bases loaded and still nobody out with the Reds now clinging to a 7-5 lead. On his second pitch, Antone made a nice glove side catch on a hard line drive by Paul Goldschmidt, then quickly threw to first to double off a runner. The double play was extremely clutch by Antone, but there was work yet to do with Nolan Arenado stepping to the dish. Arenado ripped one of his four hits today on a hanging slider, bringing in 2 more runners and the game was tied 7-7. Overall Antone threw six pitches, all breaking balls, and recorded all three outs in the 6th.

Ryan Hendrix and Heath Hembree came on to throw drama free 7th and 8th innings, with Hendrix only allowing one base runner and Hembree allowing none including two strikeouts. Dave Bell opted to save Lucas Sims for the 9th and it ended up paying off.

Sims ran into trouble with the two toughest hitters in the Cardinals lineup, Goldschmidt and Arenado. Goldschmidt sharply hit a single to left, and then the Reds caught a break when Arenado’s double to left one-hopped over the fence for a ground rule double, holding Goldschmidt at 3rd.

With 2nd and 3rd and nobody out, Sims had his work cut out for him. Sims only threw off-speed to Tyler O’Neil, and threw a biting curveball to get an infield popup for the first out. Sims then struck out Edmundo Sosa on a full count, blowing a high 96 mph fastball by him for out number two. Sims then struck out Jose Rondon on a full count with a slider way out of the zone, getting him to chase with the game on the line. A huge sigh of relief came from Reds fans everywhere, as Sims got through a stressful 9th unscathed to give the Reds the win and complete the four game sweep.

The Reds have an off day tomorrow, then return home to Great American Ball Park Tuesday to start another divisional series against the Milwaukee Brewers.

This is it. This is where the season turns. I see October baseball in our future.

I wonder if our cardinals “fan” friends are going to read this article.

Pirt
Reply to  Kevin Who Dey

While I agree with your comment that October baseball is in the Reds future, I think we cannot take our foot off the gas – this Cardinals team is the real deal and our Reds took care of them properly!!

Kevin Who Dey
Reply to  Pirt

Pirt, you are correct, good kind sir! The most important game is next game!

Scout
Reply to  Kevin Who Dey

A commenter on RLN said four guys are carrying this team: Winker, Castellanos, Sims and Antone.

I would say there are six guys carrying this team: add Mahle and Miley.

Were the Reds really that good, or was St. Louis really bad?

The series against the first place Brewers should answer that question.

All the teams in the division, including the Brewers, have big flaws. The Reds got great starting pitching and enough hitting in St. Louis and somehow Bell managed to stretch two good relief pitchers across the series. Mahle, Miley and Gray have all pitched well. Naquin deserves mention. Barnhart, India and Stephenson have made important contributions.

I agree that those guys have made important contributions.

Without those contributions it would not matter that the six have carried the team.

Also agree about the teams in the division. The Brewers with their flaws found a way to play several games above 0.500.

Reds need better players in, or better performance from, the bullpen.

Then maybe they can give Milwaukee a run for their money in the next series and the rest of the year. Here’s hoping!

Before the season started, I think one of the writers (Steve or Matt) predicted that Winker would hit 30 home runs. I thought that was too optimistic. Perhaps it was too pessimistic. Also, I was very disappointed when the Reds signed Miley. I thought he would take innings away from guys like Mahle. Now he is one of my favorites.

Jesse looked great yesterday! The go ahead run had my friends and myself screaming! One friend even apologized for being too loud

Not much better than sweeping the little Cardinals. Cheers y’all!