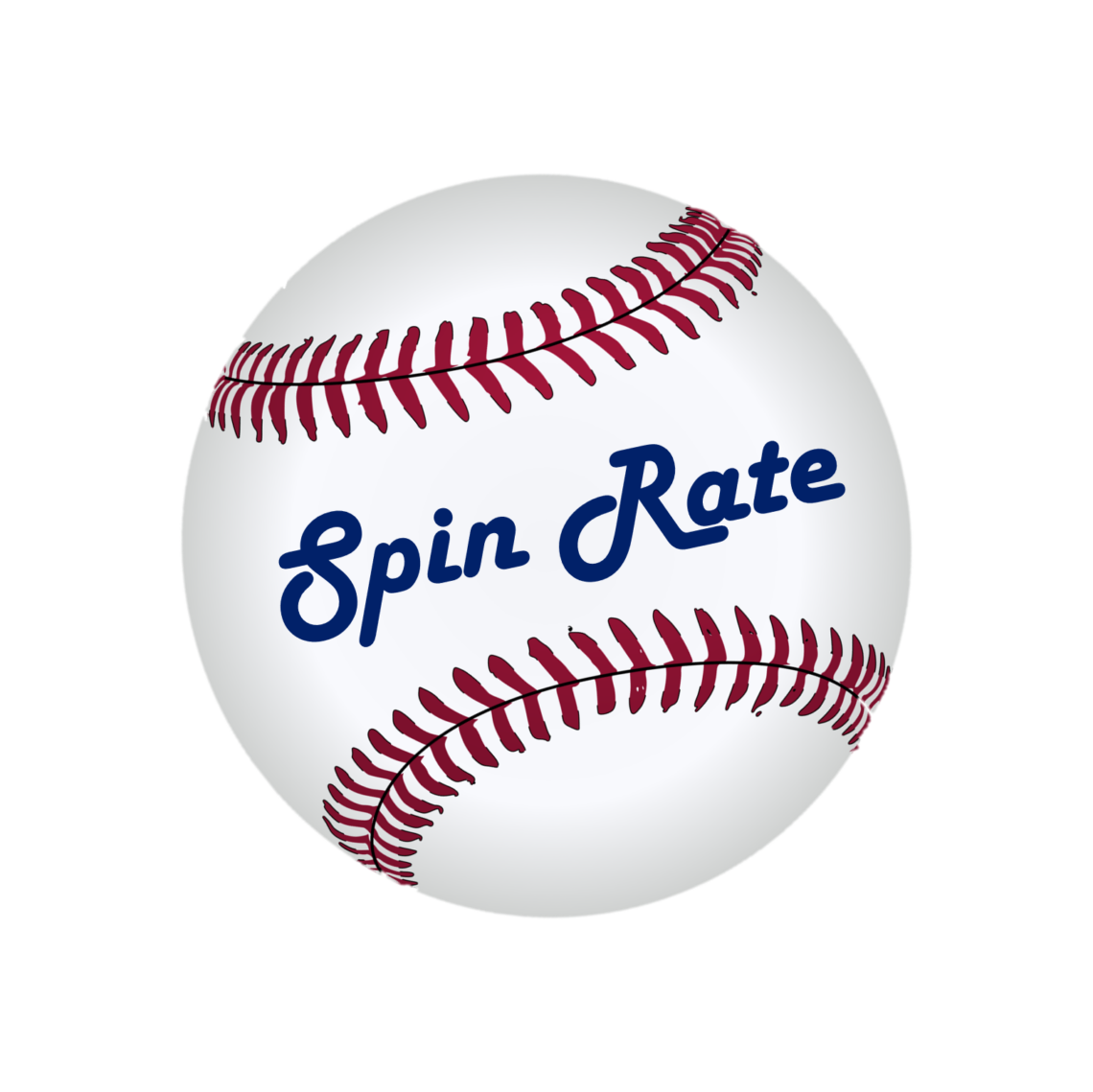 Over the last week or so, I’ve seen a variety of articles all focusing on the same topic: Pitchers using foreign substances to improve their pitches. There’s a variety of reasons why a pitcher would want to enhance their grip. For starters, it gives them better control, with many saying it results in fewer hit-by-pitches. More recently, though, increasingly sticky materials have made pitchers nearly unhittable. Foreign substances enhance the spin rate on the baseball, allowing for more movement on pitches, less of a drop on fastballs, and ultimately more swings and misses. The result has been a sharp rise in strikeouts and a corresponding drop in league batting average. Right now, MLB hitters have a combined average of .238.

This is a problem for MLB. Fans have been complaining that the modern game — full of walks, strikeouts and home runs — is getting too boring. In an attempt to create more balls in play, MLB has decided to crack down on the use of foreign substances. On June 13, it was announced that umpires would begin checking starting pitchers at least twice per game and examining relivers once per contest. If said umpire happens to find foreign substances, the pitcher would be ejected and possibly suspended for 10 games.

Applying foreign substances to the baseball is not new. I actually had the opportunity to chat with a MLB umpire, and he told me that almost every pitcher uses something. This is consistent with what we have heard from other people in the sport, including players. Trevor Bauer has become the poster boy for this idea and has even implied that he has been using some sort of substance. As MLB has begun to crack down on the use of foreign substances, many pitchers have had a stark drop in the spin rate of their pitches, notably Gerrit Cole, Yu Darvish and Trevor Bauer. Ray’s starter Tyler Glasnow has even gone as far as to suggest that his recent elbow injury is due to his inability to add grip-enhancing substances to the baseball.

This made me curious. Have there been any Reds pitchers who have seen similar decreases in spin rate?

I’ll pause for a moment. When I decided to research this topic and report my findings, I was actually very nervous. There are a lot of opinions surrounding this topic, many of them are very strong opinions. I have my own opinions, but that’s not what I want to go into today. I’m also not trying to make accusations regarding any players, as there are a variety of reasons why a pitcher’s spin rate can change in a start.

Today, I just want to look at the data.

I’ve got to be honest. I geeked out a bit that I’m writing something baseball related that required a “Research Methodology” section. Seriously though, there are a few things to note before I go crazy with data.

For the purposes of this research, I am looking at Cincinnati Reds starting pitchers and key relievers and examining their average spin rate in three ways:

I chose the entire month of June for a few different reasons. If we look at the date when MLB sent its memo all teams regarding foreign substances (June 12 is when the memo was announced), we’d be looking at too small a sample size of data. The chance of it begin skewed by having too small a sample size was high. I also considered starting the data pull from May 27, when Joe West confiscated Giovanny Gallegos’s, hat which had possible sticky substances on it. This date is too early, however, as the news and implications of the move needed time to be digested by the league. Ultimately, I chose June 1 for a few reasons:

To try to keep the data unbiased, I’m only looking at Reds pitchers who have a statistically significance in these areas:

Essentially, this eliminates pitchers like Tony Santillan and Jeff Hoffman from this analysis.

I’m also not looking at any pitches in which an enhanced grip would not impact overall effectiveness, such as the changeup.

Finally, I’m not looking at pitches that are not thrown often by a pitcher. For example, Wade Miley has only thrown 7 sliders this season. Examining data in such a small sample size greatly increases the odds that the data will be skewed and paint an inaccurate picture of what is happening on the field.

There are four starting pitchers who meet the qualifications outlined in the research methodology: Luis Castillo, Sonny Gray, Wade Miley and Tyler Mahle.

Of all the starting pitchers, Castillo has the least variance across his spin rate. While his spin rate improved by 100 RPM from 2020-2021, all of his other pitches remained fairly consistent.

From a pure spin rate perspective, Tyler Mahle is fairly consistent with what is happening all around MLB. His spin rate takes a step forward in 2021 — although his slider actually lost some spin — and his more recent starts have shown a stark drop. Mahle has lost 139 RPM on his 4-seam fastball and 145 RPM on his slider in June.

Wade Miley is unique in that he actually lost some of his spin during the 2021 season. Part of this can be attributed to small sample size in 2020, in which he was injured for much of the already shortened season. His spin rate in his more recent starts, however, fits in with the narrative that people are putting on pitchers. He lost 55 RPM on his fastball and 82 RPM on his cutter over his more recent starts.

Anyone noticing a trend here?

While it’s worth noting that Sonny Gray’s 2021 spin rate is lower than 2020, his most recent starts have moved to an even lower spin rate. His slider is the most pronounced, especially when comparing it to 2020, when it had 164 more RPM.

Ooh boy, you knew we’d have to talk about the bullpen at some point. The crazy part is that, according to the boundaries established in my research methodology, only two Reds relievers qualify for spin rate examination, namely Lucas Sims and Amir Garrett.

Lucas Sims is an interesting case here. When looking at his fastball and curveball, he first perfectly into the narrative for what’s happening around MLB. He’s shown strong spin rates over the last two years, but his most recent outings have shown a drop. His fastball has dropped 107 RPM from earlier this season and 234 RPM from last year. His curveball’s RPM change is even more drastic with a respective 2021 and 2020 RPM change of -180 RPM and -317 RPM. His slider is the one exception here. During his more recent outings, its spin rate has actually dramatically improved.

Amir Garrett’s had an interesting year so far, and his spin rates are similarly interesting. His fastball, for example, has seen a drop of 99 RPM recently. His slider, however, has actually remained fairly consistent to his past norms.

The Reds as a Team

Looking at the data of specific players was interesting for me, but I wanted to get a broader look as well. To do this, I looked at the spin rate of every 4-seam fastball, slider, curveball and cutter thrown by a Reds pitcher and broke it down based on month to month averages. 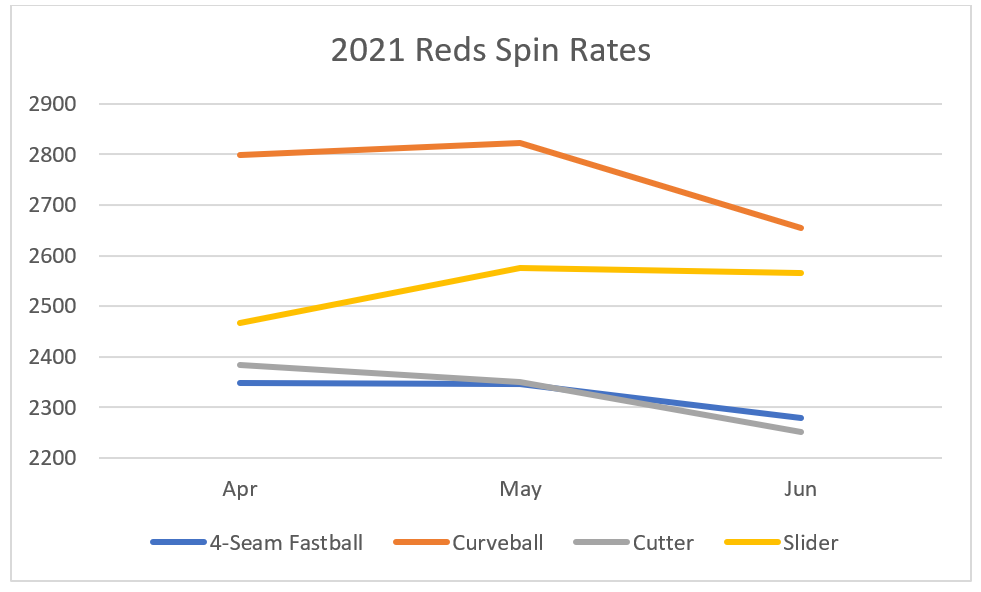 It’s fascinating, and it’s also a reflection of many of the Reds individual pitchers. Spin rates stayed fairly consistent before declining during the June month. The largest drop off was in the curveball, which lost 168 RPM during the month of June. It’s possible that it’s just small sample size variance, but it is interesting nonetheless.

I honestly don’t want to insert myself into the conversation regarding the use of foreign substances by pitchers.  There’s too many opinions about it, ranging from the use of these substances to MLB’s handling of the situation. For me, I was just curious about the data for the Reds.

I want to reiterate what I wrote at the beginning of this post. I’m not making accusations or suggesting anything about Reds pitchers. There are a variety of possible explanations as to why spin rates are down over the last couple weeks. The purpose of this exercise was to look at the data and see how it compared to the current narrative about spin rate declines happening around MLB. So far, the data suggests that the Reds are experiencing a similar drop. We’ll have to see what happens as the season continues.

How does the Reds overall drop in June compare to other teams, such as the Cardinals?