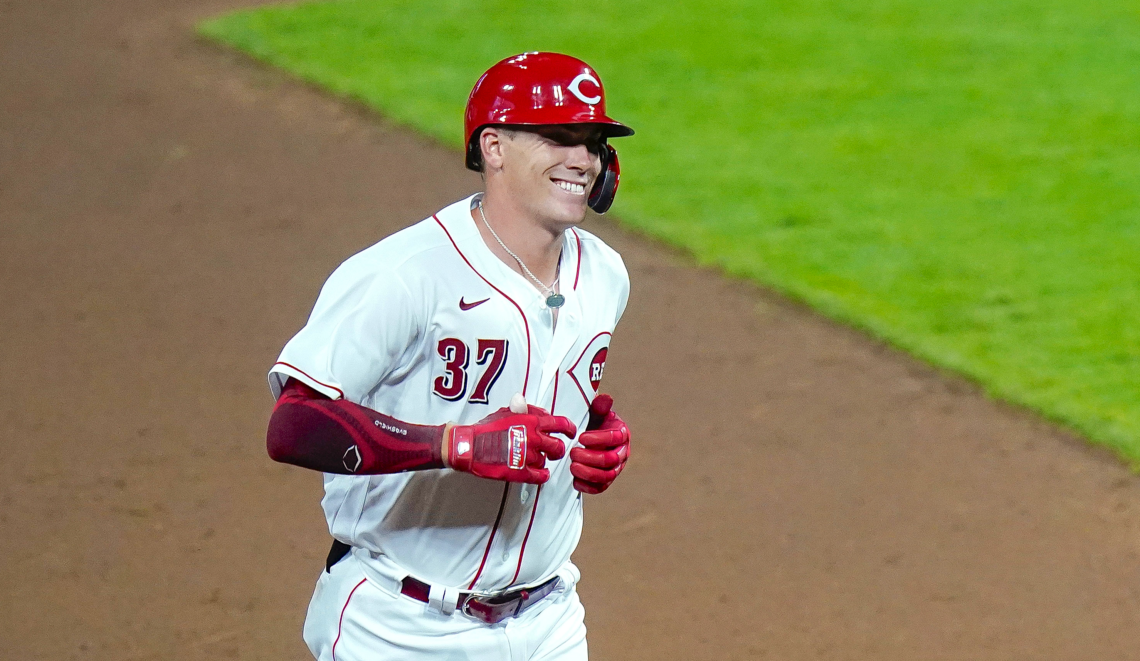 It looked pretty bleak after the eighth inning as the Padres took the lead in another game interrupted by a rain delay. It seemed the Reds were about to let one more slip away late and were staring at another sweep to the Padres. All that changed in one swing of the bat as Kyle Farmer tied the game with a home run. A few minutes later, Tyler Stephenson would finish the comeback with a walk-off single to get the Reds back to .500.

After stranding two baserunners in the first, the Reds struck first in the second inning. Alejo Lopez snuck a ground ball past Fernando Tatis Jr. for a single to start the inning. Aristides Aquino followed with a solid seven-pitch walk to put two on. Kyle Farmer sent a 67.4 mph dying line drive up the middle, but Lopez was held up at third. With the bases loaded and no outs, Luis Castillo bounced a hard ground ball to the hole at short. Tatis Jr. only had one play to third base allowing Lopez to score. Jonathan India inside outed a blooper that landed in front of the diving Trent Grisham. Farmer had broken on contact and scored easily, but the ball bounced away from Grisham allowing India to move into second for a double. After a strikeout, starting All-Star Nick Castellanos was intentionally walked to load the bases, but was stranded after a line out to center ended the inning.

The Reds were back for more after the rain delay in the bottom of the fifth. With two outs, Lopez singled for his third hit of the ballgame on an infield single up the middle. After an errant pickoff throw and a wild pitch moved Lopez to second and then third base, Aquino lined a double down the right-field line to get the Reds back up by two runs. Unfortunately, Farmer’s ground ball single was kept in the infield keeping Aquino from scoring, and Castillo’s strikeout ended the inning.

Over the next three innings, the Reds would strand seven baserunners, never getting that next hit needed to score one of the five runners that made it into scoring position.

That all changed in the ninth inning. With one out, down one in the bottom of the ninth, Farmer crushed a ball to deep center that would clear the center-field wall for a home run (104.9 mph 406 feet) and tie the game at 4-4.

FARM DAWG IN THE CLUTCH pic.twitter.com/xdfdOBFiOf

After Tucker Barnhart worked a walk, India then hit the hardest ball of the game at 109 mph on a line drive at Jurickson Profar in left field. Profar overran the ball, stumbling as the ball hit his glove and bounced away, ultimately ending in a double for India. After a fielder’s choice and a second intentional walk to Castellanos, the bases were loaded for Tyler Stephenson. He responded by shooting a line drive to right field for his second walk-off of the year, for a Reds win.

If there's an NL ROY conversation, @Tyler_Step22's name needs to be in it. pic.twitter.com/QKiN6pCIR0

Luis Castillo had his second game in a row looking much more like the ace of this Reds pitching staff. Castillo ultimately went six and third innings, striking out six, walking three, and giving up three earned runs. However, his dominance through the first four innings, prior to the rain delay, was a lot of fun to watch. Castillo threw his hardest pitch of the year at 100.2 mph and had both his slider and changeup working as put-away pitches as demonstrated below:

What an absolutely filthy pitch from Luis Castillo pic.twitter.com/PxUyHjkrwN

After walking Grisham to open the game, Castillo got his first strikeout against Tatis Jr. as Stephenson threw out Grisham erasing the baserunner. Castillo then went on two retire the next ten batters in a row through the fourth innings. While looking untouchable through four, the near hourlong rain delay put a stop to the momentum.

The top of the fifth started with a Manny Machado walk followed by an Eric Hosmer infield single to a diving Jonathan India. Jurickson Profar hit a deep flyball off the wall just over the glove of Aquino to score Machado before Castillo could work out of the inning.

After a 1-2-3 sixth against the top of the lineup, Machado singled to open the sixth, followed by another infield single off the third-base bag by Hosmer. Profar walked to load the bases and Tommy Pham’s pinch-hit single brought in two runs to tie the game at 3-3 and ended Castillo’s night.

Amir Garrett entered in relief and retired the side leaving two men stranded and limiting the damage.

Brad Brach came on in the eighth allowing a single to Tatis Jr. before getting a flyout and fielder’s choice for the next two outs. After Machado stole second, a groundball to Lopez should have ended the inning. Instead, an errant throw allowed the inning to continue and Machado to score, giving the Padres a 4-3 lead.

Art Warren gave up a double to open the ninth, but then struck out the next three batters, all swinging, to keep it a one-run game and set the stage for the dramatic 9th inning comeback.

The Reds open a big divisional series with the Cubs tomorrow night at Great American Ball Park. First pitch is at 7:10 p.m. EST as Sonny Gray returns to face off against Alec Mills.

I think Castillo has looked like the ace of the staff over his last 6 starts, beginning with shutting down the Cardinals. He’s had terrible luck this season, including rain delays disrupting two of his recent starts.

Nice job by the bullpen tonight. Brach and Warren have been consistently effective and Garret has only allowed a run once in his last 12 appearances, while also stranding runners.

What a comeback, that would have been such a frustrating loss. In the 9th four Reds obviously had excellent ABs. In addition Naquin hung in there after going 0-2, fouling off 3 pitches and making Melancon work a little.