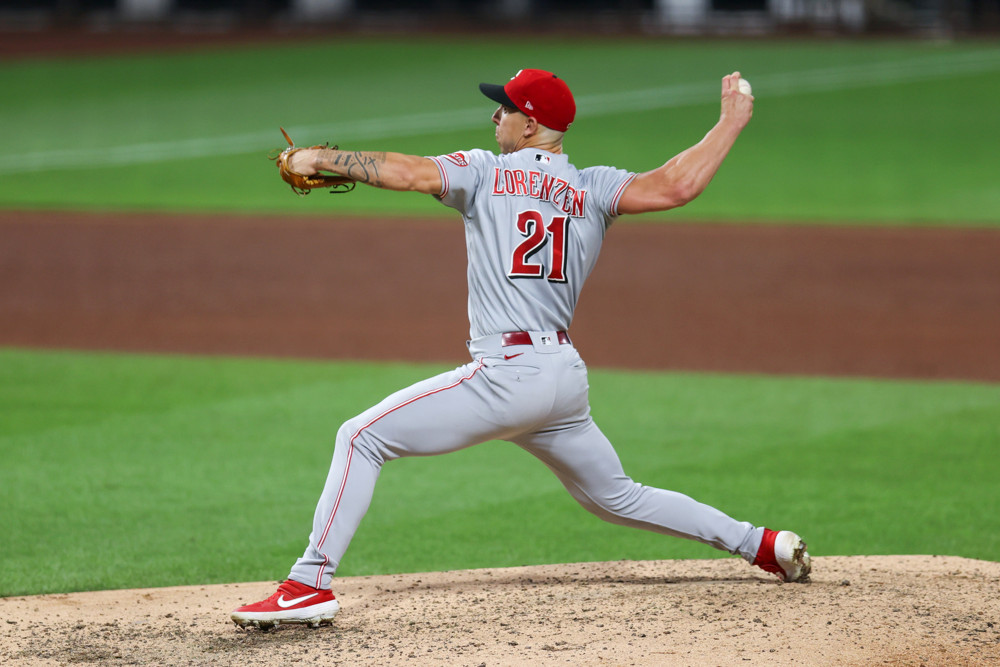 It’s safe to say the bullpen has been far from a strength of this 2021 Reds team. Reds relievers rank 29th in the Majors in ERA, and the peripherals don’t provide a ton of optimism either. They also rank 27th in FIP, 25th in xFIP, and 21st in SIERA. Note that all stats are through July 5 unless otherwise stated.

However, it hasn’t been all bad for the Reds bullpen, as they have shown notable improvements in recent weeks. Since June 25, Reds relievers rank second in the majors with a 1.06 ERA. Their 3.01 FIP (second in the Majors), 4.07 FIP (tied for eighth) and 3.53 SIERA (fifth) all back up that success. That success has also come without Lucas Sims and Tejay Antone, arguably the Reds’ best two relievers. It provides an interesting wrinkle in the Reds’ plans, as Antone, Sims, and Michael Lorenzen will all be returning soon. They also have Jeff Hoffman seemingly nearing a return, and his future appears to be in the bullpen as well. For a team that a month ago seemed desperate to add bullpen help at the deadline, it now appears they have too many arms for too few roster spots.

So that begs the question, what should the Reds do when those four relievers return? The answer isn’t so simple. Since that June 25 date, just one Reds reliever has an ERA north of 1.70: Ryan Hendrix, who has a 3.86 ERA over that span. The peripherals paint a bit clearer of a picture, with two pitchers jumping off the page as candidates for demotion.

One is Sean Doolittle, who has a 4.41 FIP over that span, but also an 8.83 xFIP and 7.32 SIERA. On the season as a whole, Doolittle has a 4.74 FIP, 5.71 xFIP, and 4.67 SIERA that all leave something to be desired. He’s also on the wrong side of his prime and relies almost entirely on a subpar fastball, which he throws more than 88% of the time. It seems like an easy call to designate Doolittle for assignment to open one of those roster spots. Still, he’s also making $1.5M and was considered the Reds’ “biggest” offseason acquisition, so it remains to be seen if the Reds would pull the plug.

The other reliever that’s struggled recently is Hendrix. While the ERA still looks respectable since June 25, his 5.73 FIP, 4.84 xFIP, and 4.51 SIERA don’t believe in even his modest success. His season numbers look a bit rough as well, with a 5.47 ERA being backed by a 5.29 FIP, 4.36 xFIP, and 4.34 SIERA. Hendrix is young, has options left, and was a solid relief prospect coming into the season, but doesn’t seem to be quite ready for the Majors at this stage. The Reds could option him to AAA to make the second roster spot, a move designed with his future in mind as well.

Finding a third spot in the bullpen is a bit tougher. Looking at the season-long numbers, the ones that stand out as having struggled are Cionel Pérez, Amir Garrett, and Heath Hembree. Still, each has their own case for sticking on the roster.

Pérez has been fantastic since being recalled from AAA recently, making two appearances and striking out three of the four batters he has faced without allowing a baserunner. Additionally, prior to his most recent call-up, Pérez was pitching quite well in AAA, potentially helping his case.

Garrett has come on strong after a rough start, and hasn’t allowed a run since June 17. He’s been pitching in high-leverage spots recently and has picked up three saves since last allowing a run. Given his track record and recent rebound, it would be an absolute shock if he was one of the pitchers sent out.

Hembree is an interesting case. He has flashed tantalizing strikeout upside, posting an elite 41.7% strikeout rate this season. His walk rate of 9.3% is very manageable as well, and on par with his career normal. His peripherals paint an interesting and conflicting picture, as his 3.11 xERA, 3.21 xFIP, and 2.31 SIERA are all quite good. However, his 4.92 FIP is much closer to his 5.06 ERA. That is caused primarily by a 24.2 HR/FB% and corresponding 2.70 HR/9 rate that both seem unsustainably high. Still, you can probably recall a few too many pitches left right over the heart of the plate that have been crushed. If Hembree can reign in the long ball, it’s an easy decision to keep him on the roster, but if not, his roster spot could be in serious jeopardy.

A wild card here is Josh Osich, a left-handed reliever who has found success in a limited sample. His 1.17 ERA is backed by a still-solid 3.94 FIP, 3.40 xFIP, and 3.33 SIERA, though his 18.5% strikeout rate leaves a lot to be desired. In his small sample, Osich has displayed far and away the best control in the Reds’ bullpen, as his 3.7% walk rate is leaps and bounds ahead of Hembree, the next best on the team. Osich also posted a 4.16 xFIP in 2019 and a 3.30 xFIP in 2020, along with an even better SIERA in each of those two seasons. This could help him stand out over some of the other waiver-wire acquisitions.

Unless anything changes, we can probably assume that one of Osich or Pérez is likely to be the third roster casualty, as the Reds are currently carrying 3 LHP in the bullpen. At this point, it’s probably more likely the Reds simply option Pérez once again and have him waiting as the first potential call-up if a need arises. Osich does have an option himself as well.

The fourth roster casualty is an even tougher one to peg, though the Reds still have some time. Perhaps in the next few weeks, one reliever will struggle and differentiate himself from the pack. Maybe Hoffman comes back to the bullpen and doesn’t pitch all that well himself and is the one to go.

Another potential wild card is the rotation. Maybe Vladimir Gutierrez underperforms or an injury opens up a rotation spot that the Reds fill with one of Lorenzen, Hoffman, or Antone. An injury could always pop up in the bullpen as well and open a spot. There seem to be a lot of factors in play here and not a ton of clarity. The other wrinkle is Tony Santillan‘s move to the bullpen in AAA. He could also be ready to step in if the need would arise.

Another consideration could be around the usage of Lorenzen. If the Reds are still willing to use Lorenzen as a bench bat, backup outfielder, and pinch hitter, perhaps this opens the possibility of demoting a position player, and keeping an extra reliever. This doesn’t seem particularly likely, as it would leave the Reds with just a four-man bench, not counting Lorenzen. That bench would also be dominated by outfielders, as it’s unlikely that Shogo Akiyama, Tyler Naquin, or Aristides Aquino would be sent out. Still, it’s not entirely out of the question that the Reds could go this route.

The final wrinkle in the equation is Michael Feliz, who is also nearing a return. Feliz was quite good with the Pirates in a small sample before the Reds claimed him off waivers, but has been nothing short of a disaster in a Reds uniform. He pitched just 1 2/3 innings in 2020, but was fairly solid in 2019, ranking 10% above average in ERA and just 3% below average in xFIP. SIERA and xERA were more optimistic regarding Feliz’s 2019, each outperforming his 3.99 ERA. While it wouldn’t be a surprise to see Feliz get another shot at the MLB level, it also wouldn’t be a shock to see him designated for assignment at the end of his rehab stint. Given the logjam, it feels a touch more likely that Feliz will not return to the MLB roster.

The biggest change in the past few weeks is that it now doesn’t seem like an absolute necessity to add relief pitching at the deadline. This could open up resources for the Reds to spend elsewhere, potentially upgrading shortstop for example. That’s not at all saying that the Reds shouldn’t look to add bullpen depth, as you can never have too much bullpen depth. Still, it’s seemingly become a luxury rather than a true need, at least if they continue performing like they have recently.

Perez has allowed baserunners. a HR and a single. Had to get 4 outs that inning because of Stephenson’s passed ball, but an error shouldn’t result in a 2 run HR, a single, and unable to complete the inning. That was a big factor in the loss, as Brach was brought in to get the last out of the 8th and sit down rather starting the 9th fresh. Perez has great stuff but inconsistent command and is unproven in high leverage situations.

Osich has arguably been the best reliever since joining the bullpen. He has excellent control and has not been allowing hard contact. The only HR he’s allowed was on a routine fly ball to RF the night the wind was blowing out and a bunch of other HRs were crushed. He has pitched successfully in high leverage situations.

Hembree isn’t going anywhere, due to his strikeouts, a WHIP barely over 1.0, and total poise with the game on the line. With his propensity to allow HRs, he needs to keep runners off base, but he’s good at that. I like him opening an inning, not coming in with inherited runners.

I agree with you about Hendrix and Doolittle. Perez and Hendrix will be the first two sent down. They have options, of course.

Reds win 3-1, take 3 of 4 in Milwaukee for another series win – Reds Content Plus

[…] history. Credit to David Bell and Derek Johnson for patching together a bullpen ownership opted not to invest in – we’ll see if that changes with the team four games back heading into the […]