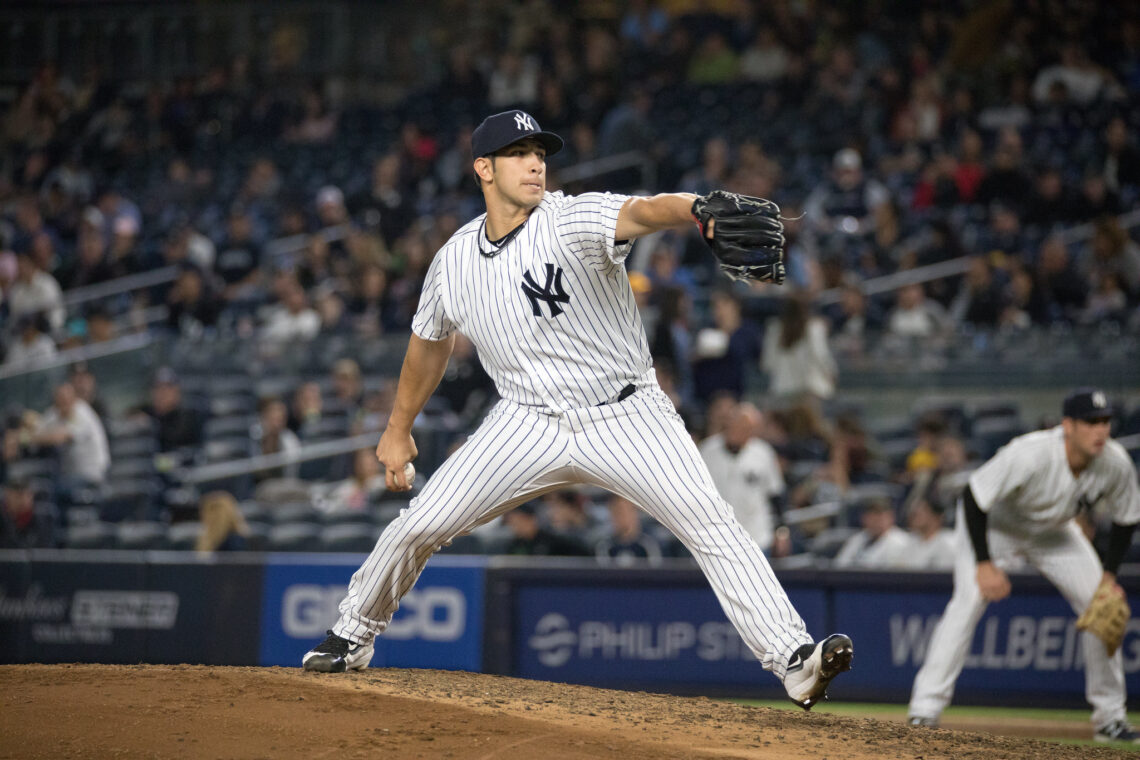 Late Tuesday night — or early Wednesday morning, depending on where you are — the Reds announced they’ve acquired two relievers, Luis Cessa and Justin Wilson from the Yankees in exchange for a player to be named later.

It’s not a huge splash, but at least with Cessa, the Reds got an upgrade over several current bullpen arms. Wilson is in the midst of a rough season, though he does have a track record of success. Let’s take a closer look at both pitchers.

Cessa signed with the Mets at the age of 16 as an international free agent from Mexico. He began as a shortstop before moving to pitching a couple of years into his professional career. Cessa was later part of the deal that sent Yoenis Cespedes from the Tigers to the Mets, moving to Detroit along with Michael Fulmer in 2015. The Tigers dealt him away that offseason sending him to the Yankees for, ironically enough, Justin Wilson.

As a Super Two player, Cessa has gone through two years of arbitration. Assuming the rules stay the same under the next collective bargaining agreement, he’ll go through arbitration again this offseason and next offseason before he’s eligible for free agency after the 2023 season.

Cessa has a fairly limited injury history and no recorded arm issues.

Cessa made his big-league debut for the Yankees in 2016 and spent the next two seasons bouncing back and forth between the minors and majors. Although he was a starting pitcher for much of his minor-league career, he struggled in his sporadic spot starts and the Yankees eventually transitioned him to the bullpen.

Since moving to a relief role full time in 2019, Cessa has a 3.64 ERA, outperforming his peripherals (4.34 FIP, 4.51 xFIP). He’s a low-strikeout pitcher — especially for reliever — with average control. But he does have an above-average ground-ball rate, which has helped him limit damage even in the extremely hitter-friendly Yankee Stadium.

The 29-year-old has pitched 38.1 innings with the Yankees this year and has a 2.82 ERA, 3.86 xERA, 3.54 FIP, and 4.22 xFIP. He currently has a career-worst 10.6% walk rate, although control hasn’t been a major issue in his career. Cessa has a career-best 56.8% ground-ball rate this season. He also has reverse splits this season, performing better against left-handed hitters than righties:

The right-hander throws his slider more than any other pitch, using it more than 60% of the time. He’s increased its usage every season since he’s been in the big leagues. 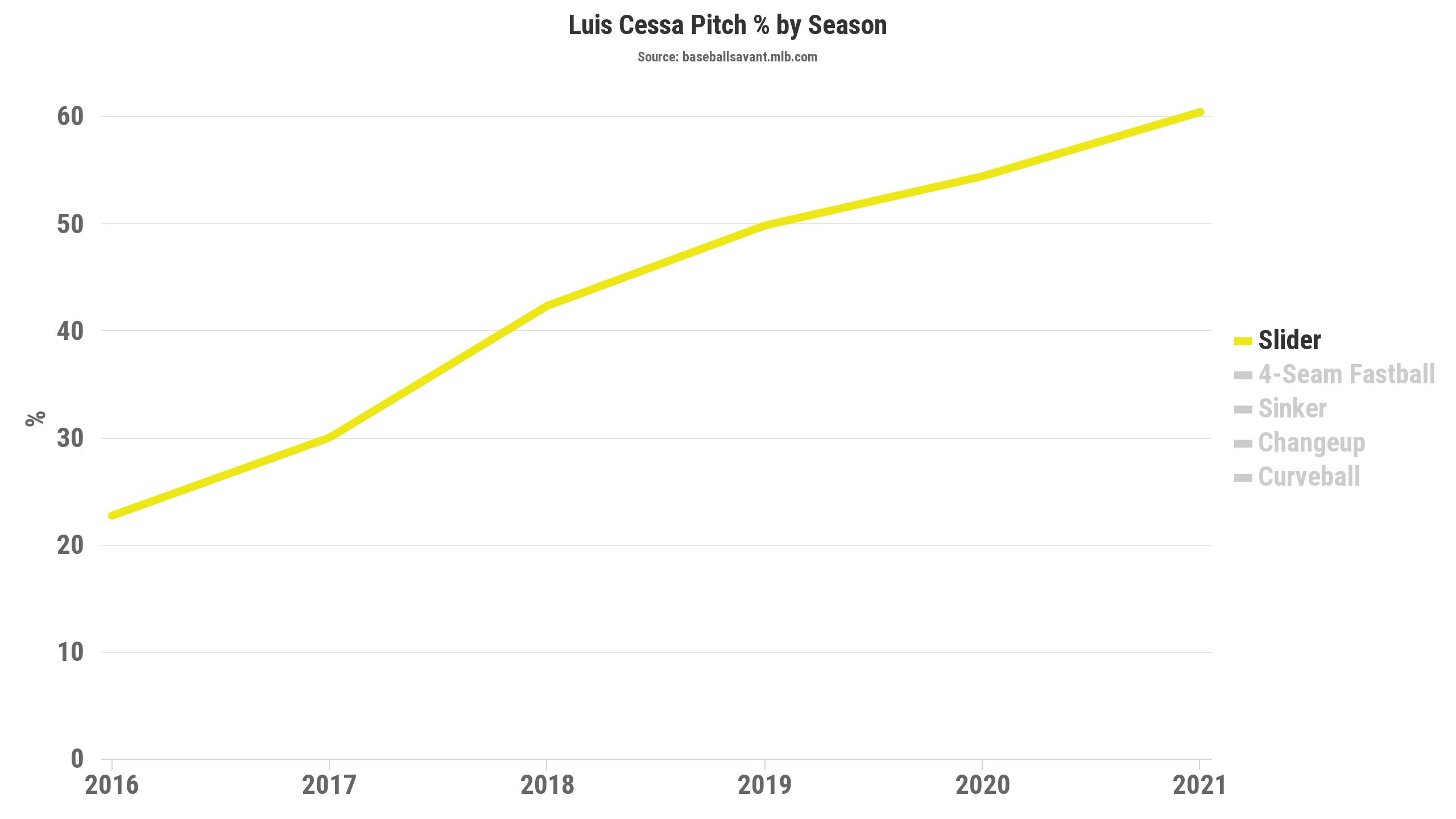 Cessa’s slider gets above average spin and 3.6 inches of drop above average. It’s gotten diminishing returns as he’s increased its usage to 60.4% this year, however. His 31.9% whiff rate on the slider is the lowest of his career and his .301 xwOBA is his worst since 2017. It’s possible he’s just throwing it a bit too much.

Regardless, it’s an impressive pitch to watch. Here’s a look at it:

Cessa usually throws his sinker against right-handed hitters and his changeup to lefties. Both have strong ground-ball rates.

Wilson is a 10-year MLB veteran who has played for five teams. He was originally selected by the Pirates in the fifth round of the 2008 draft. Although he pitched as a starter in his minor-league career, he’s been used exclusively as a reliever in all of his 501 career appearances. The left-hander debuted with Pittsburgh in 2012. He was traded to the Yankees in 2014 for catcher Francisco Cervelli. The Yankees dealt Wilson the following year in the aforementioned Cessa trade. In 2017, the Tigers dealt him, along with catcher Alex Avila, to the Cubs. Wilson became a free agent for the first time after the 2018 season and signed a two-year deal with the Mets.

The Yankees signed Wilson to a one-year contract worth $2.85 million in February. He has a $7.15 million team option — which the Reds will almost certainly not pick up — or a $2.3 million player option for 2022. The Reds could also buy out his contract for $1.15 million, making him a free agent after this season.

Wilson has mostly stayed healthy until the last few years. He appeared in 58 or more games in every season between 2013 and 2018.

This year, Wilson has missed time with shoulder and hamstring injuries, which may have hampered his effectiveness on the mound, too. He has a career worst 7.50 ERA, 4.72 xERA, 6.76 FIP, and 5.73 xFIP in 18 innings. Wilson’s strikeout rate has fallen by more than eight points to 18.1% while his walk rate has stayed high (10.8%). His ERA is heavily influenced by a five-run outing on July 3, which accounted for one-third of the runs he’s allowed this season. But as the peripherals show, he hasn’t been very effective even if we throw that nightmare appearance out.

Wilson is primarily a two-pitch reliever, mostly relying on a four-seam fastball and cutter. He’ll mix in a slider every once in a while.

His four-seam fastball, which he throws 65% of the time, was formerly a high-spin pitch, ranking in the 83rd percentile or better in every season from 2016 through 2019. The pitch has lost about 100 rpm of spin over the last two seasons, though, bringing it down to the 56th percentile as the rest of the league emphasizes spin rate. Wilson’s velocity has dipped as well, falling to a career low of 93.4 mph in 2021, well down from 94.9 mph in 2020 and 96 mph at his peak. He has thrown a bit harder since returning from a hamstring strain in late June (94.2 mph).

Wilson’s fastball has been abysmal this season, worth a +10 run value (positive is bad for pitchers). That ranks as the 11th-worst individual pitch in baseball and the sixth-worst four-seam fastball. The pitch’s whiff rate, which was once well above average as it hovered around 30%, is down to a career low 21.4%. However, Wilson still gets good spin efficiency (97%) on his four-seamer, which helps it get rise (2.4 inches above average) despite lower raw spin. That means we’ll see plenty of high fastballs like this:

Wilson has only thrown 17 sliders this season. The breaking pitch also gets above average drop (+4.2 inches).

The Yankees undoubtedly wanted to dump Wilson’s salary as they’re reportedly trying to shed payroll while adding at the deadline. In turn for taking on his contract, the Reds got Cessa in the deal. Taking on Wilson’s contract may also be notable in that it signals the Reds are willing to spend some money to acquire more help at the trade deadline.

While we don’t know what player the Reds will eventually send over to the Bronx, it’s hard to criticize this trade right now. The bullpen is clearly better right now than it was 24 hours ago. Cessa isn’t a dominant reliever, but he’s a clear upgrade over several pitchers the Reds have used out of the bullpen. Wilson at least has a track record of success, even if he’s struggled this year. The Reds are surely hoping that with Wilson now healthy, Derek Johnson can work some magic and help the 33-year-old get back on track.

To make room for Cessa and Wilson on the 40-man roster, the Reds designated Ashton Goudeau and Edgar García for assignment. Another spot will have to be cleared on the active roster. Ryan Hendrix or Josh Osich are the most likely candidates to be sent down to Triple-A. Neither has pitched particularly well and both have options remaining.

I am very happy to see that the Reds are willing to take on salary – a huge development, especially if they do more of it in the coming days (and years…). Keeping the prospect capital intact while giving virtual zero except salary in order to improve – even if only a little improvement – is a very good move. I wish it could (would?) have been done six weeks ago: the best time to plant an oak tree was 30 years ago, the next best is today. Thanks for the write up!

I think Hendrix will be sent down, so he can get more regular work.

Thanks for the thorough report, Matt. The Reds just traded two pitching prospects to the Rockies for Mychal Givens.

Not surprisingly, Osich has been DFA’d.

[…] after acquiring Luis Cessa and Justin Wilson from the Yankees, the Reds acquired another reliever on Wednesday when they received right-hander […]

Reds hold on to win 6-5, split mini series with Twins – Reds Content Plus

[…] acquired Luis Cessa was brought in, now facing Larnach with runners on 2nd and 3rd and nobody out. Larnach grounded a […]